I originally bought the Oliver + S hopscotch pattern just for the skirt. It also comes with a top/dress, but I had a fear of knits for some reason. I had been reading about them for a while, made-by-rae.com did an awesome knit-erview series where she interviewed bloggers about their experiences, hints and tips about working with knits, so I was warming up to the idea. Then after discovering Oliver + S patterns I knew if anyone could explain sewing with knits, it was Liesel. I was right. This dress was a breeze!! 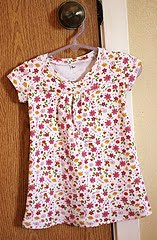 Another I have had in my stash for ages. A long time ago I thought I could sew with knit, and I tried, and failed. But I made this one, then the next day made two more. All in size 6m. 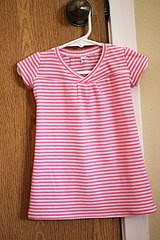 This is a really soft knit from Joann's, one of their higher end knits, not their brand. It is so soft, and it was a little harder to work with, but I love it. And I really took my time and matched up all the little stripes. 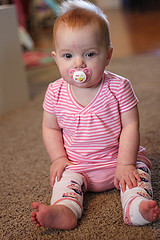 Sweet thing had just woken up. She is my only out of the four to take a pacifier. It is kinda nice. 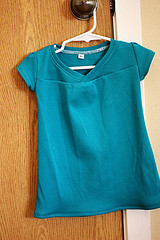 I bought this ages ago to make a cardigan for myself, that never happened, so I turned it into a dress instead! 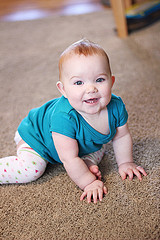 Ah, Elizabeth, she has figured out how to transition from sitting to her belly, so it is much harder to get a good shot of her. This is the first time I have captured her two bottom teeth:)

Email ThisBlogThis!Share to TwitterShare to FacebookShare to Pinterest
Labels: for the twins, hopscotch, Oliver + S