It's back!! My desire to sew (everything) is back!! The only downside is, I have so many ideas running through my head I just don't know where to start!  I have thought about a knit sailboat top ever since I tried my first one on George. It was so cute on, but a tight fit on a wiggly baby. I have plans to make Abby a tunic length to go with leggings for school, but first I wanted to test out my skills on a smaller size. Ya know, just in case I screw something major up (which I did, more on that later...).  Girlfriends were both super ornery today, so no trying it on them just yet, but it looks like it will be a bit big on Georgia for sure, good thing Elizabeth is a good 4 1/2 pounds bigger (yes! That was how much of a difference at their doctor appointment a few weeks back!!) so she will fill it out better.

I made a 12m with 3/8" seams instead of 1/2", it just seems more natural since that is what most knit patterns I have use, plus I figured a bit more room wont hurt. Oh, I shortened the sleeves and lengthened it to the 18m size, but that is pretty standard for me to lengthen all patterns for my long torso-ed kids.  ﻿ 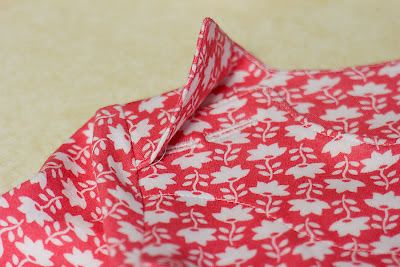 Do you see the problem here?? I managed to sew three nice button holes (the fourth I screwed up, unpicked and re-did) but I realized only when I got to the very end - I mean, hem facing sewn, sleeves hemmed, everything serged, pressed and threads clipped- I realized the button holes were on the bottom layer. AAAAGGGGHHHH!!! I was pretty mad.  But then it hit me- VELCRO.  Not only will it solve the problem at hand, but how much easier will it be to get my spazzy 13 month old twins dressed using velcro instead of four small buttons? 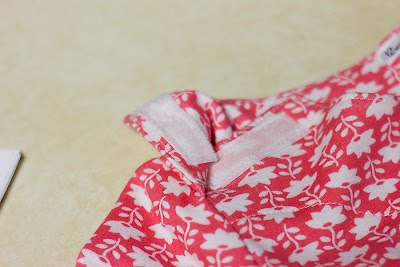 So I put the soft side on top since it was a bit more flexible I figured sewing on a button through it would be easier than the rigid loop side. 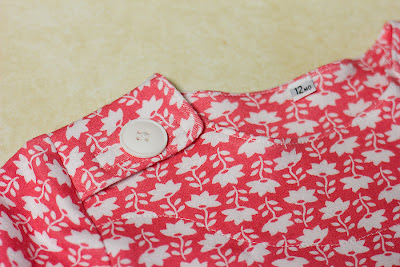 I didn't really want to sew 4 buttons on through the velcro, and I remembered seeing Nicole's cute version, so that is what I copied! 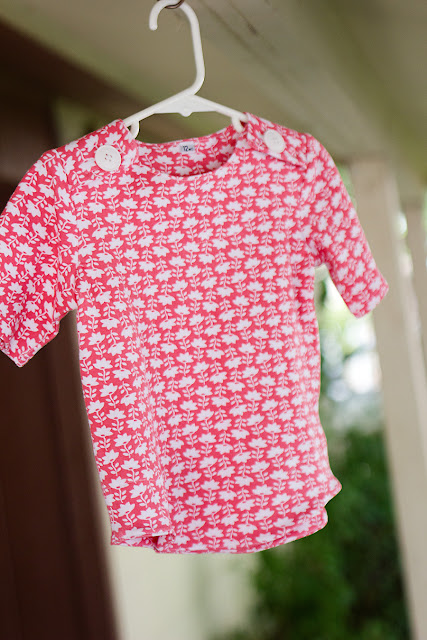 Here it is in all it's glory.  I so love the O+S knit, I just wish I had picked some more up when I finally found it as it is gone now. (I probably have just enough of each color way to make one more small sized top)  It is so smooth and buttery, one of my favorites I have worked with yet.  I plan to make one in the orange color way for the other twin.  Probably with velcro, but this time on purpose, ha!
Posted by brittney at 6:05 PM 2 comments:

Email ThisBlogThis!Share to TwitterShare to FacebookShare to Pinterest
Labels: for the twins, Oliver + S, sailboat

Twinsies were in desperate need of some jammies, so last night after the kids all went to bed and Ben was away on a night dive at a local lake, I busted out some fabric, patterns and some Jason Aldean and went to work.  I used my go-to t-shirt pattern, the first time I have done it in long sleeves! I have made it sooo many times and didn't realize that.  Makes sense though, because our summers are insanely hot.  Living in the desert many of our days are 105+ but the nights dip down to the 70's.  We turn the swamp cooler on at night and that cools it down quite a bit, so the kids wake up a bit chilly in the morning. It is nice though, because we turn it off in the morning when we wake and don't usually need to turn it on again until well after lunch (having two Mullberry trees that shade my house doesn't hurt either).  Anyways, back to the deets.  I used the leila and ben skinny pants pattern.  Both patterns I made in 12m, but I lengthened the shirt to hopefully get some longer wear from them.
﻿ 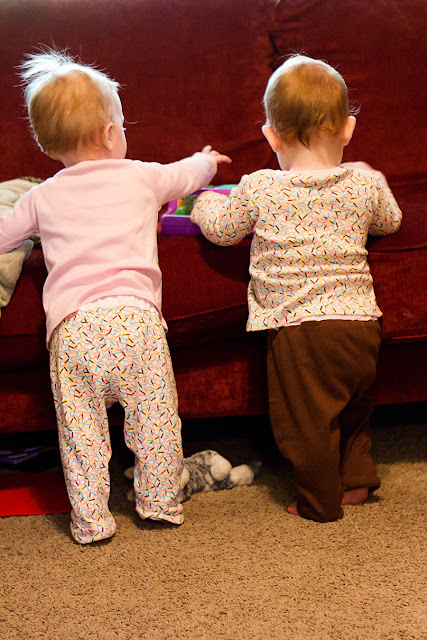 Yes, I did put them on the second they woke up and they have been wearing them ever since:)

I was able to punch out 4 pants and 2 shirts last night.  Woot! I still plan on making a few more shirts as they get dirty pretty easily, being babies and all.  They are all meant to be interchangeable (you're welcome Ben), and though there are two "sprinkle" pants and two brown pants each of the pants and shirts all have different wasitbands/neckbands.  Going with my whole coordinating but not matching style I have going on with the twins. 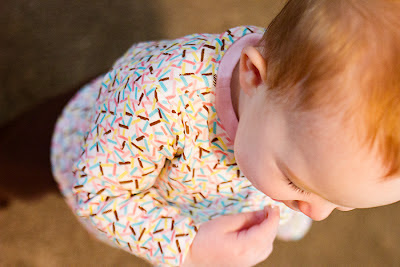 With a pink neckband. 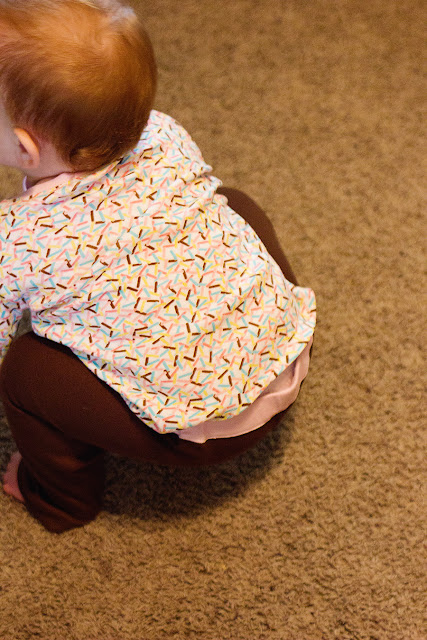 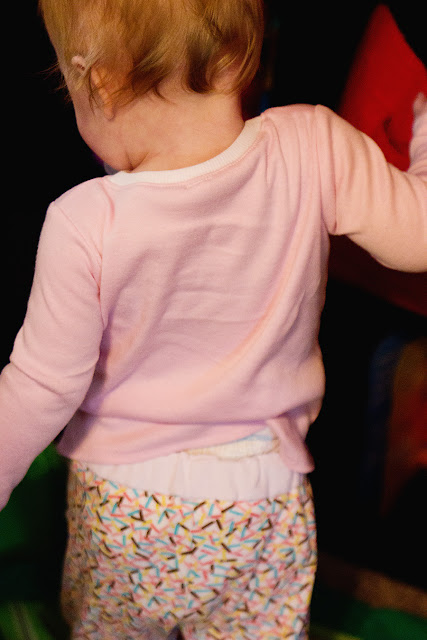 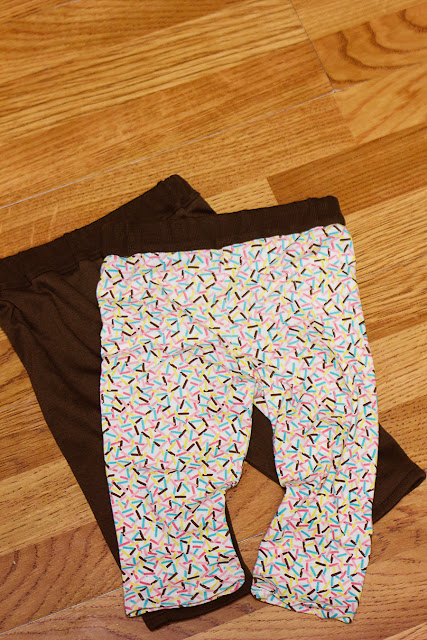 Then the other two.  Ben said to me "Wow, you are getting pretty good.  I can't even tell they are homemade.  In the beginning I could definitely pick out what you made."  Um, thanks?  They aren't meant to look homemade, silly :)  The length of the shirts are where I like them, probably should have added a bit more since I want them to last... oh well... and the sleeves are just a little long.  I could have gone a little tighter on the elastic for the pants (but since they weren't awake I couldn't measure) and they just touch the ground, but don't get in the way of walking... yes, walking! They are finally to the point of walking 90% of the time. *sigh* My babies are growing up too fast.

P.S. I was reeeally craving some Neopolitan ice cream by the time I was done with these... don't they remind you of that too? Please tell me I am not crazy, ha!
Posted by brittney at 1:10 PM 5 comments:

Email ThisBlogThis!Share to TwitterShare to FacebookShare to Pinterest
Labels: flashback tee, for the twins, leila and ben, made-by-rae

A raven hoodie for my beauty.

Flickr is a dangerous place for my budget.  I saw many beautiful Raven sets by Clever Charlotte popping up in my stream for a while and I finally bit the bullet when Cindy (the enabler ;) ) mentioned there was a short sale on the patterns a while back I snagged the Raven and Finch.  FINALLY got around to making one of them this week! While it should have been the Finch as it is a summer outfit, I went with the Raven hoodie.  You see, school goes back in less than a month and Abby needs new clothes! So my intent was to make the hoodie and pants, but that hasn't happened yet.  I have been distracted with a pile of pajamas for the twins, they are first in the need to make pile. 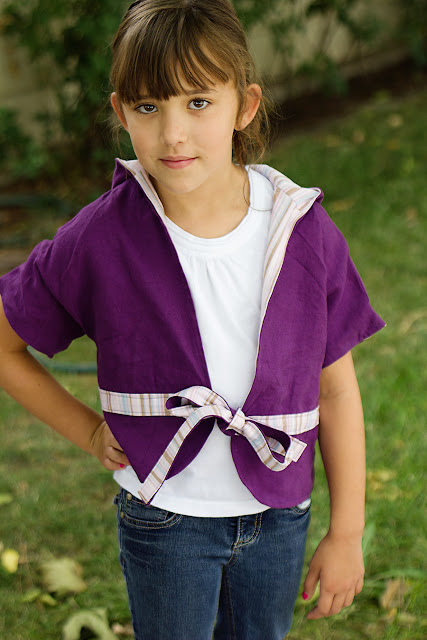 I went with a six and the length called for in the pattern, though I was really debating the length. I wish I had lengthened it so it would last a bit longer, but live and learn.

She absolutely cracks me up, the whole time I was making it she kept asking "So, do you promise it can be flipped around?" "It really can go either way?" Yes, dear.  But she just wasn't convinced until it was all made up and I flipped it around for her.  But now she can't decide which side she likes the most, ha! 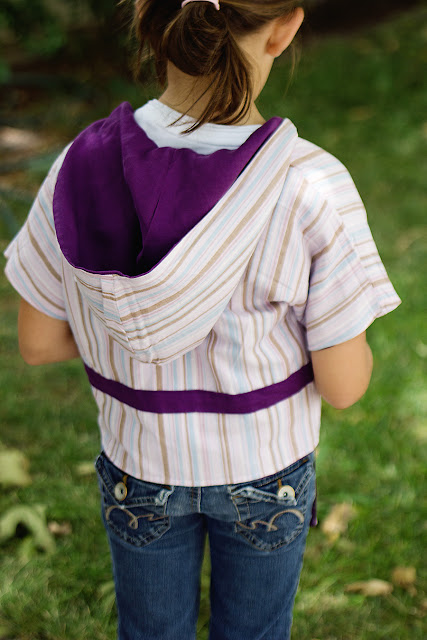 I used a deep purple linen and a lavendar, baby blue, light brown and white striped homespun.  I have the homespun in another color way and it was intended for the twins, but I saw this combo and it was fate.  I have to admit, I wasn't a fan of the hoodie when I saw it on the package or even made sitting on my sewing table, but once she put it on I was head over heels!  I can't decide if I will be making more this fall, it just depends I guess on how much she wears this one.

The plan is to finish the outfit by making the pants in a dark blue denim and perhaps a white long sleeved hopscotch top. She is going to be one styling 2nd grader!
Posted by brittney at 2:01 PM 4 comments:

My sewing mojo has left the building.  I never thought  I would say this, but for the last few weeks I have had absolutely no desire to sew anything.  Sigh.

This hopscotch was sewn the last week in June, but I never got around to posting about it.  Ben's cousin took newborn pictures of the twins and I always meant to make her something for photo props, but didn't have time (ya know, newborn twins;) then I heard she was pregnant so I decided to make her something for her baby instead.  I waited to make something just in case she had a baby shower (but she didn't), I made it intending to give it to her at our family's 4th of July super duper party, but I didn't stick it in the diaper bag.  Oops.  So, it is still sitting on my ironing board... but it is a 12 m, and the baby was born this spring, so I have time.﻿ 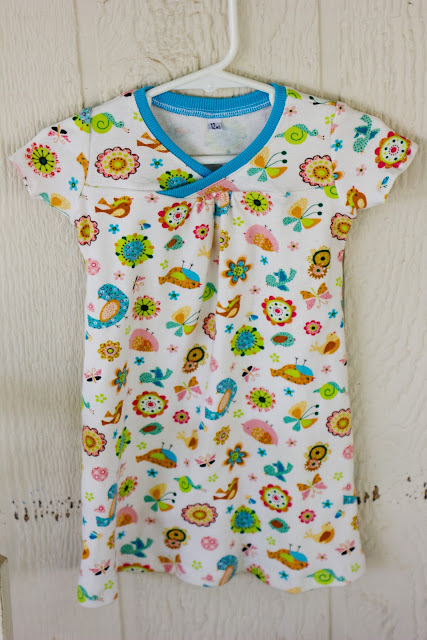 Abby and Jack went to Lake Powell with Grandpa and Grandma, so I decided to "force" myself to sew, and ya know what? I really enjoyed it.  I made two Oliver and S Classic picnic blouses in some lisette (popplin, I believe) that I got on super duper liquidation at my local Joann's that is moving locations (I may have mentioned that before...?).  I made 12m for both, but lengthened quite a bit... like, I think I lengthened it to 3t.  It looked like it would be a little short for my taste from the drawing, plus I pretty much lengthen everything at least one extra size.  My only complaint was when it came to hemming the teeny tiny sleeves.  I can't even imagine how the 6m would be!! 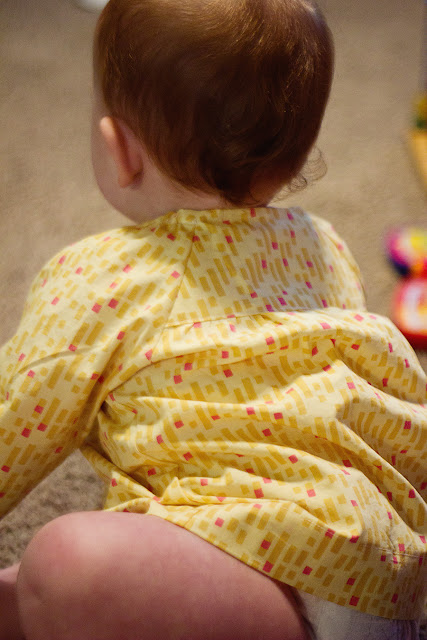 Iz has sweet little curls. Well, so does George, but Iz's stay around even after rolling around on the ground where Georgia's go straight. 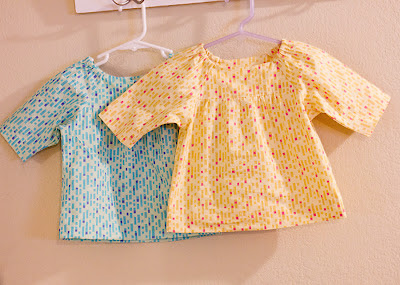 I recieved the fall Ottobre and I am thinking I will be sewing lots more soon as I liked 80% of what was in it.  Abby starts school in just over a month and we will be moving soon after that so I need to get a start on her school wardrobe! 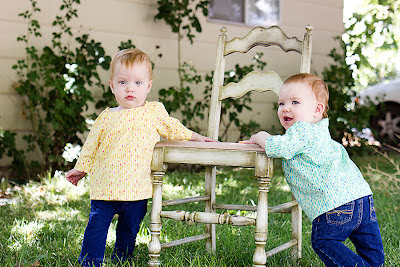