My friend who commissions me from time to time reached out to me again this time requesting Christmas skirts.  She saw this one that she really liked on Pinterest, and of course it was from long enough ago that those fabrics were no longer available.  I did find some similar, though, and she liked them when I showed her what I had found locally, so I went ahead and made them.
﻿ 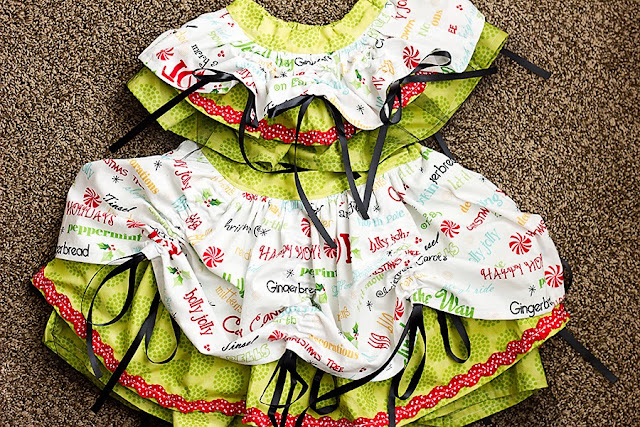 So here is my take on that skirt.  I like it because it is similar but not exact.  One is approximately a 12 month and the other is 5t.  I say approximately because I am not positive on their current RTW sizes, I just worked with their waist and length measurements. 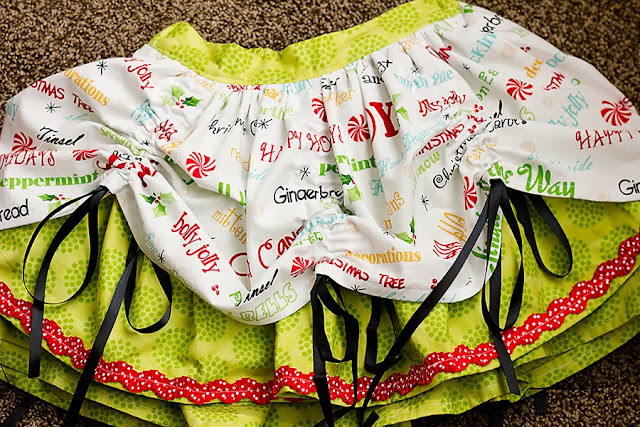 Here is a closer, more detailed shot, and it looks like that ribbon in the middle could use a good ironing. 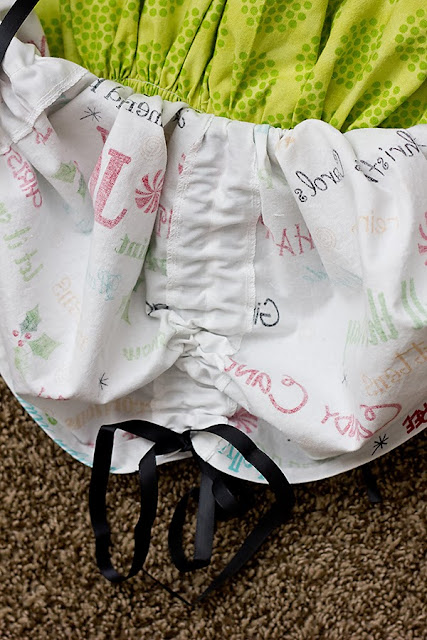 There are six ribbon casings with two ribbons each.  Basically a 2" rectangle, serged on the two long sides and folded under on the hem line (the skirt was hemmed pre-casing), the top of the casing is flush with the top of the skirt so the raw edges were enclosed with the waistband. 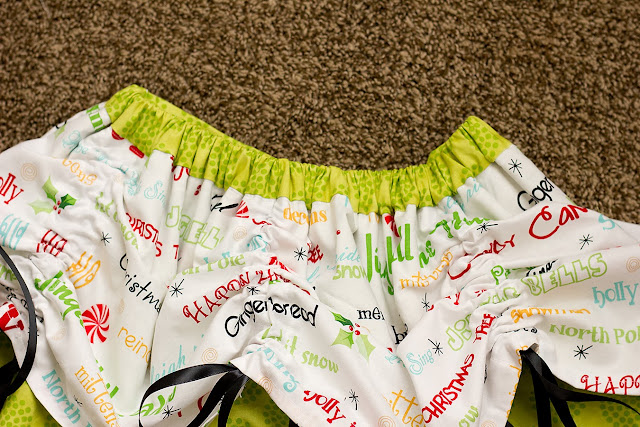 Speaking of the waistband, it is a flat front skirt with an elastic back.  I love the look of flat front bottoms. 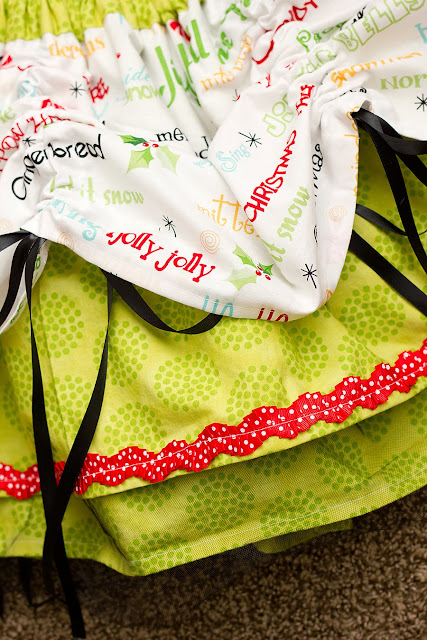 So there are lots of layers here (the waistband was a nightmare, so bulky! )  The white word layer, a lime green with the red ribbon, black tulle (it doesn't translate well in pictures, much easier to see IRL) and then the final lime green layer- don't want that itchy tulle touching kids skin!

I showed my friend and she said she loved them, so mission accomplished:)  Can't wait to see her cute kiddos in them!
Posted by brittney at 4:57 PM 3 comments:

Email ThisBlogThis!Share to TwitterShare to FacebookShare to Pinterest
Labels: for others

Abby was invited to a birthday party today, and in typical me fashion, I waited until the last minute to make a gift! (I actually had bought something yesterday when I didn't feel up to sewing and wasn't thinking I would want to today either, so that will have to be returned now.)  I find it hard to buy gifts for girls from 7-10 years, are dolls to babyish?  Nail polish and lotions to grown up?  Is handmade lame?  Abby plays with this little girl quite a bit and so I asked if she had an 18" doll, yes, she did.  So why not make a couple of outfits for the doll?  M'kay.  Abby was supposed to nonchalantly ask after her doll, if she likes to play with it as much as Abby does, but I am guessing it wasn't so smooth and it probably raised her suspicion as she had just invited Abs to her birthday.   Oh well.
﻿ 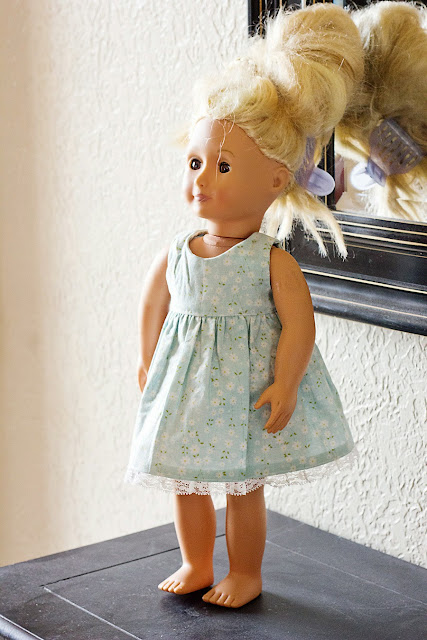 First off, I hate doll hair.  Hate it with a flipping passion.  It is gets so yucky so quickly!

I used this pattern but quite modified the construction.  I lengthened the skirt, left off the overlay, flower and waistband as I was strapped for time (also no cool overlay fabric)- but this isn't what changed the construction.  I read through the instructions and knew there was a better way to put it together.  I pretty much put it together like the Geranium Dress (which I am long overdue making another one or five of those!), the only difference being I made the opening all the way down the back so as to be able to dress her by putting her arms in the holes, not over the head.  Clear as mud?  I have a picture later to show what I mean.  Though I am totally thinking of making it a true mini geranium, cap sleeves and u-notch, anyone?

So I heart this fabric.  I first used it waaaay back when, when the twins were only nine months (and I still had a crummy camera that sucked indoors).  I saw it a while back on clearance and bought up the rest of the bolt, like 4 yards, so it will be seen again. 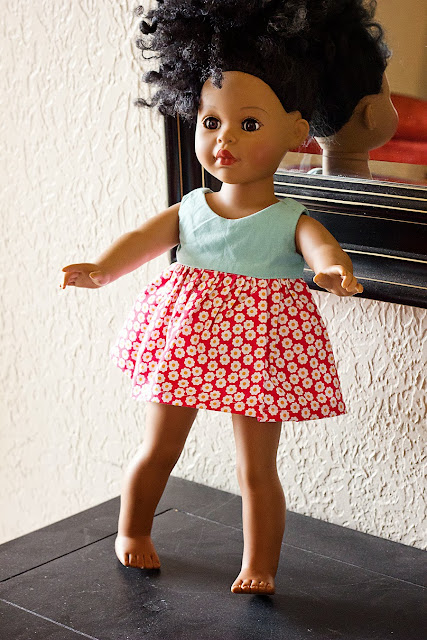 So this ended up really short.  I am thinking it is because I left off the waistband, probably is... I think... because it wasn't this short in the pattern picture. 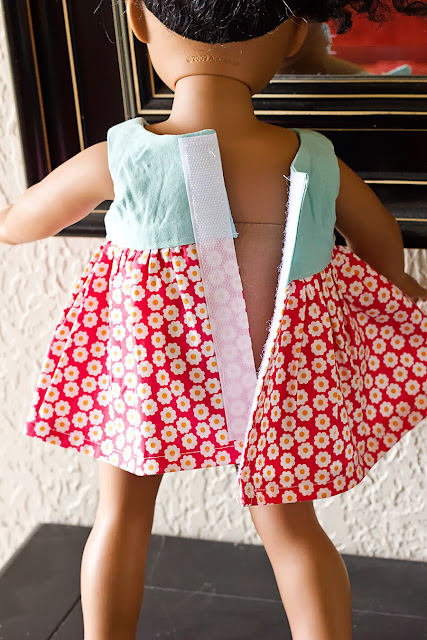 M'kay, here is what I was talking about.  The geranium dress only opens a little under the bodice and I made mine open to the bottom, again, for easy doll dressing. 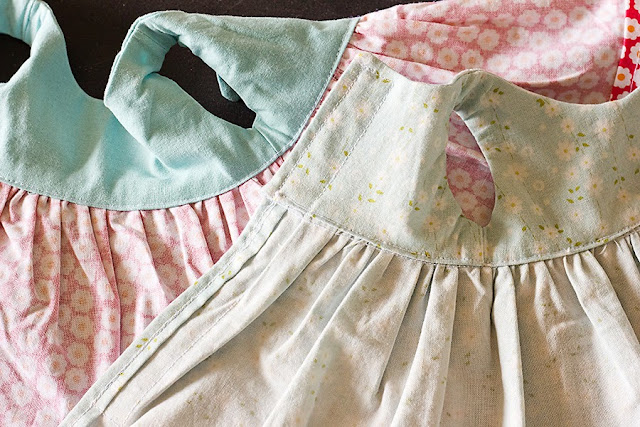 Also, my way (okay, Rae's way) of construction just leaves such a nice finish on the inside.  Perfect for gift giving.  (the pattern instructions weren't so nicely finished on the insides, at least the side seam for the arm holes).

So randomness, the girl whose birthday it was is also named Georgia.  When we picked that name we looked it up on the social security website and it was like #750 something in  popularity so I didn't think I would ever meet anyone else with that name!

I have managed to misplace my hot glue gun or I would have made her some dolly headbands too, so I dipped in to my stash of purchased doll accessories and also packed a pair of shoes and a necklace/bracelet set.  Gotta love $2 Wal-Mart doll stuff.  Abby said it the gift was well received, so hopefully they will get some use!
Posted by brittney at 9:28 PM 7 comments:

Email ThisBlogThis!Share to TwitterShare to FacebookShare to Pinterest
Labels: doll clothes, for dolls

I haven't felt up to sewing lately, and it's killing me!  I wanted a quick project to get me back in to it, and that way if I still wasn't feeling it I wasn't halfway through a project that would become a UFO.
﻿ 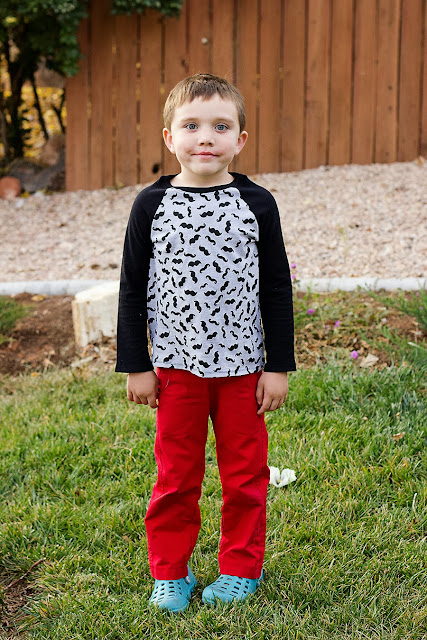 I recently made a purchase from girlcharlee and threw this moustache print in crossing my fingers Jack would like it too.  I showed him a few months back and he said "no way!" but he tends to like things after they are made, so I took a chance.  Speaking of, remember these red After-School pants?  Yeah, how he REFUSED to wear them ever.  Guess what have become his most worn pants in his closet? HAHAHA!

So, the pattern! It is the Oliver + S Field Trip Raglan, size 5, which turns out is too big for him, hence the weirdness at his shoulders.  I really should have made a 4 with length but I was being lazy, also they were made while he was at kindy so I didn't have his current measurements handy.  And it looks like I could have lengthened his sleeves, oops. 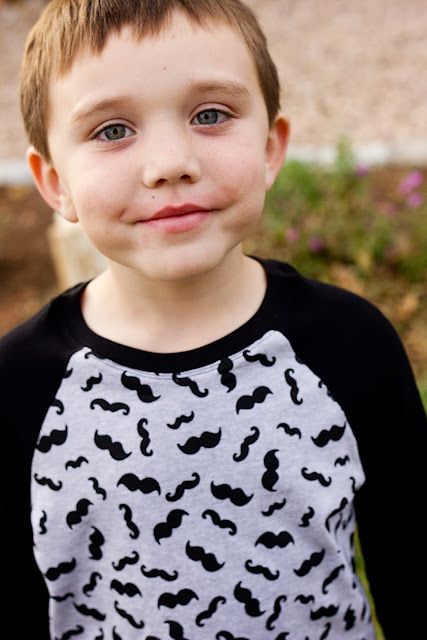 I love this boy. 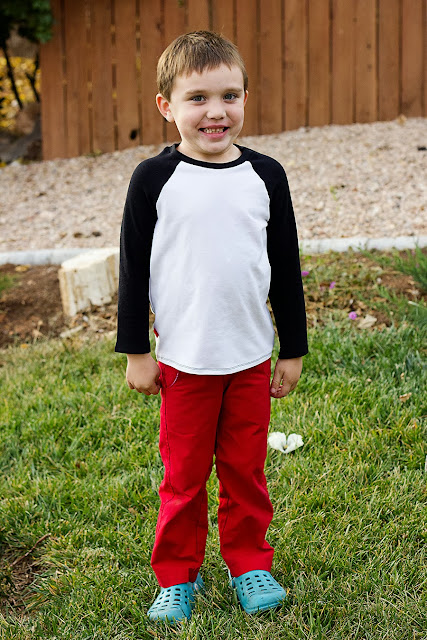 I ask him for a nice smile and this is what I get! 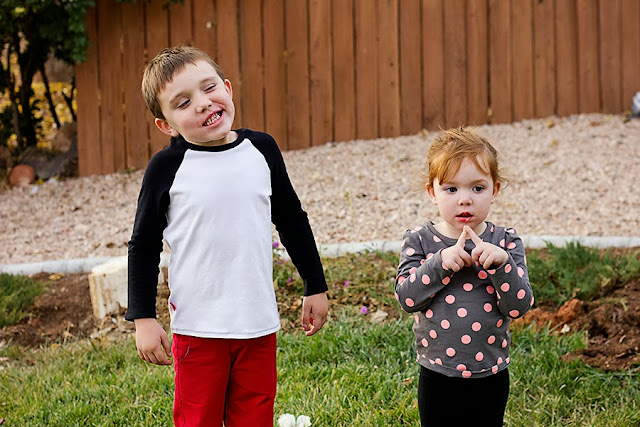 Also a permanent silly face when the adorable little photobomber showed up.  She still refused to look at the camera even though she demanded to be in the picture. 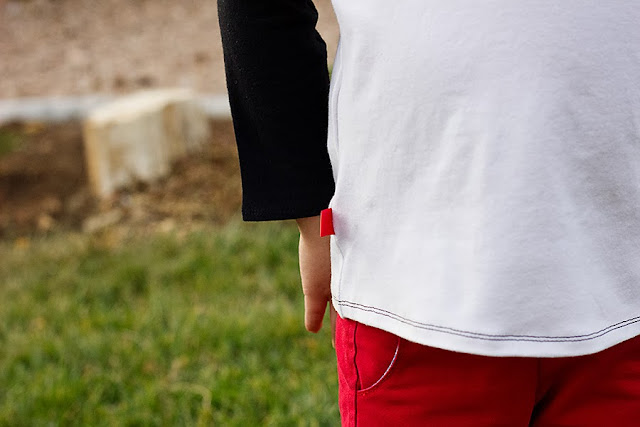 A little ribbon tag, so Peta :)  He said it was his favorite part, ha! 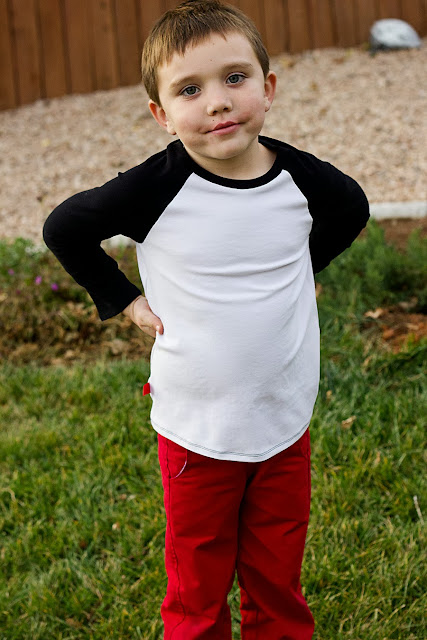 This one is also a size 5 and both knits are from girlcharlee.  For our annual group family photo (Ben's side) the colors this year are red, black, white, gray and blue jeans.  I am thinking I may be a rebel though and have Jack wear these pants.  The twins will be wearing dresses with leggings, so they will be "cheating" too, hm...

Being I haven't been sewing and it got cold here suddenly I had to go out and buy all the kids some long sleeve shirts.  When sweet little Jack came home from kindy and saw his two new shirts he told me "I love the clothes you make me most of all, Mom!  Store boughts are okay, buuuut I like yours best!" Awww, he is my favorite son;)
Posted by brittney at 5:52 PM 4 comments:

So, I did make a little bit of Abby's Halloween costume.  Then I got a whole bunch of photo sessions (newborn in the hospital, class Halloween party, 2 weddings and newborn at home)and the pictures were lost somewhere in a folder on my computer and I made myself edit like crazy before I did a blog post (because paid work comes first, sorry ;) )

On  to the costume!  Abby has been reading the Harry Potter books and watching the movies (1+ 2 so far) so she had Hermoine Granger on the brain.  ﻿ 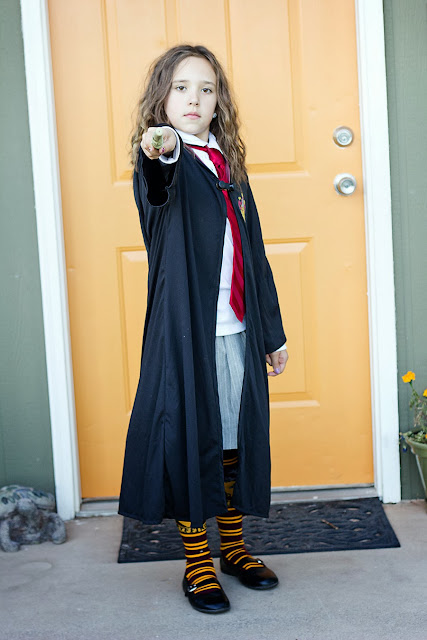 I found a legit Gryffindor cape and Hermoine wand on ebay, purchased white shirt from Kohl's, Dad's tie I bought for him on year for family pictures he refused to ever wear because it looked too "Christmasy" and some Gryffindor socks Abby found on a trip to the Halloween store with Grandma.  What does that leave besides the shoes?  Her skirt of course! 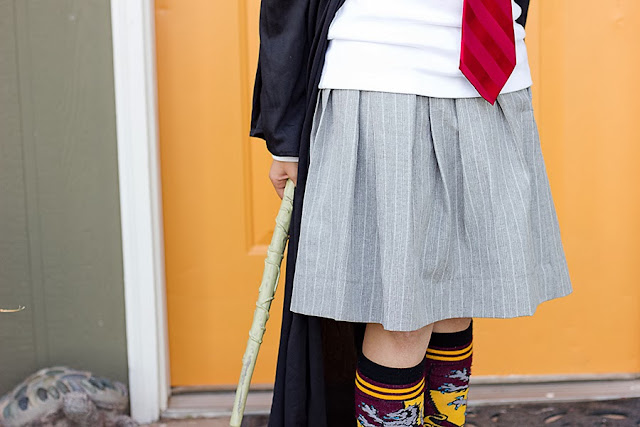 I used the Oliver + S 2 + 2 pleated skirt in a suiting from Jo-Ann's.  I made a size 7 as she measured in to a 6, but alas, it didn't fit.  You are supposed to add snaps to the placket of the skirt, but she couldn't snap them closed and I put the button as far to the edge as I could.  It worked, she wore it 5 times for various parties and the actual trick-or-treating, she just wore some white undershorts (that she always wears under skirts anyways for modesty on the playground).

I so want to make another one of these skirts though!  I thought looking at the pattern it would take foooorever, but it really was a pretty quick sew!  Wouldn't the twins look adorable in a little pleated skirt?? 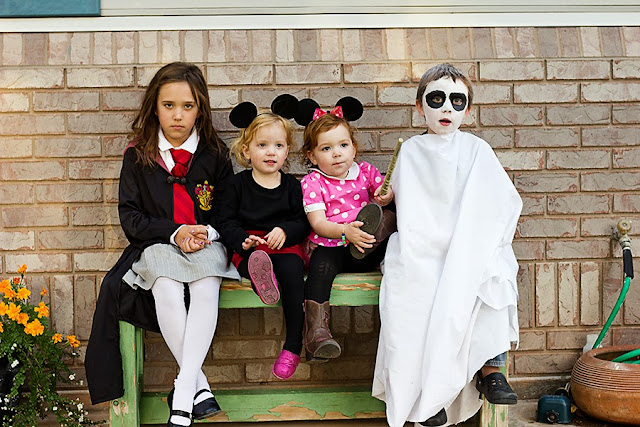 Here are all the kids together, a moody Hermoine ( Iz stole her wand) Mickey and Minnie and a classic ghost.  Love these kiddos!
Posted by brittney at 10:21 PM 6 comments: