The fates aligned again today, Ben took the 4 oldest swimming this afternoon and then volunteered to make dinner (husband of the year), and Sam took a decent sized nap.  Decent enough that I was able to finish the outfit I had been slowly working on for the last three days.  Everything takes forever these days, but I'm not complaining. 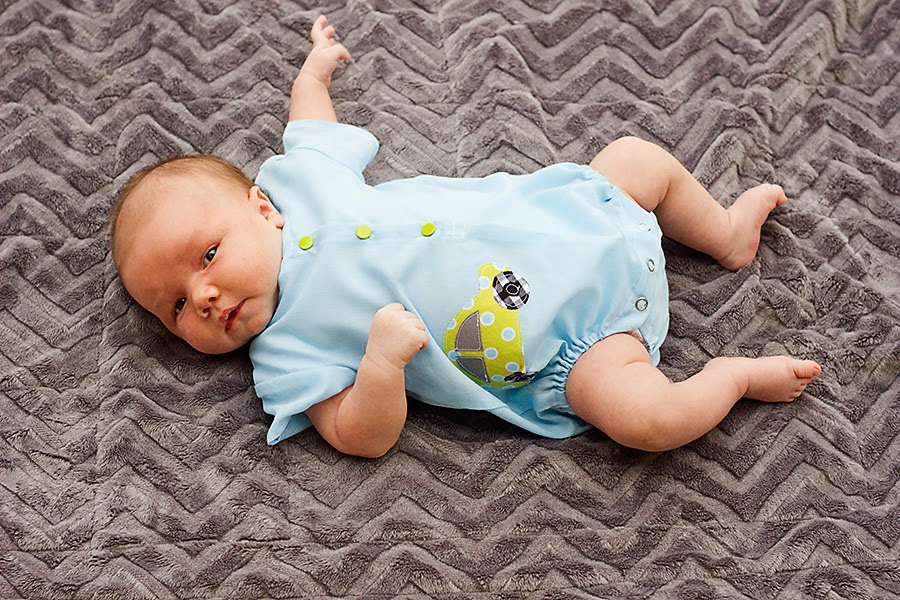 I totally love his other bodysuits and wanted a quick and easy project, so I again went with the Oliver + S Lullaby Layette Bodysuit.  Someday I will make the other pieces in the set... This one is a 3 month, he is currently one month old (tomorrow) and weighs 12 pounds and is close to 22", so he needed the length.  All my kids are giants though, so I wasn't surprised he was a tall one.

I tried print mixing with the applique, not quite sure if I dig it, but what's done is done.

Speaking of what's done is done, I totally screwed up on this one... 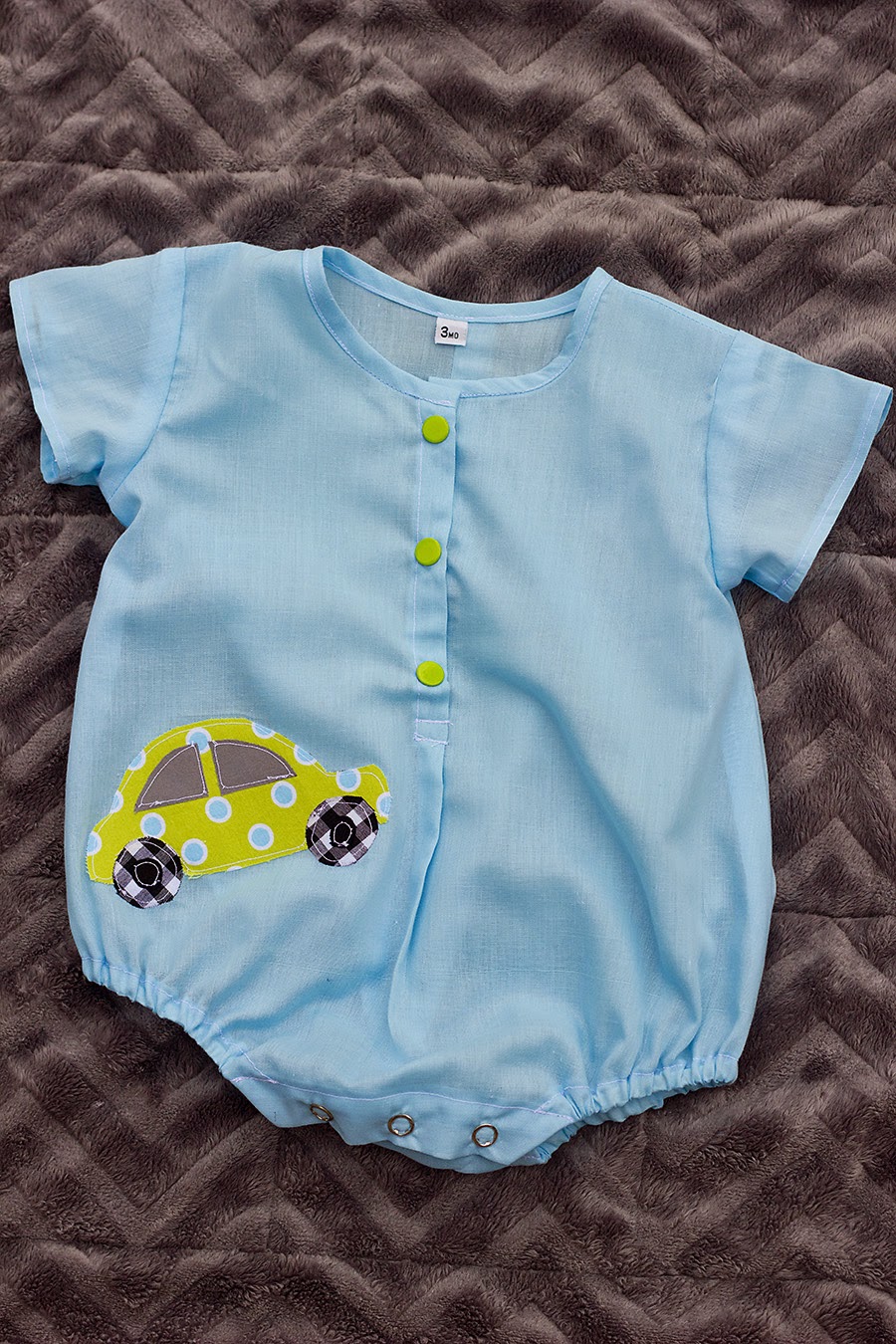 So I used this ever so soft and lightweight shirting, but the downside (other than it shifting like crazy while sewing) is that I couldn't really differentiate the right side from wrong side.  Well, I got sewing and not thinking and managed to sew the back of the bodysuit on wrong side out, so the pleat shows on the back.  Which would have been fine if I had flattened the pleat in the middle like I was thinking of doing rather than pressing it to one side like instructed.  So it looks a little weird, but there is a dang good chance I will be the only one who notices, oh, and Ben being I told him.  Normally I would have pulled out the seam ripper, but I had already sewn + serged the shoulder seams and completely sewn on the binding before I realized my mistake, so I said screw it. 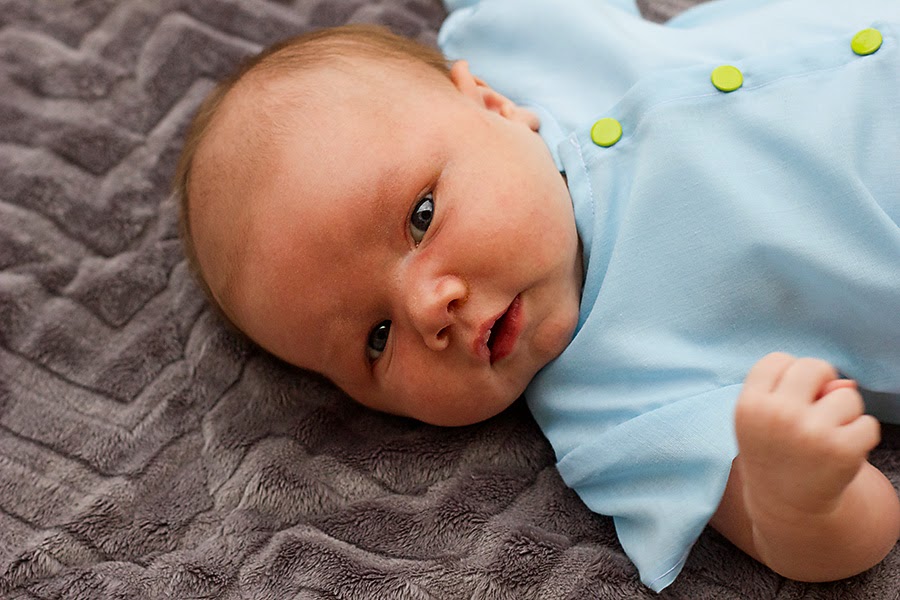 It is amazing how fast their little faces change.  He is starting to look so different to me, his hair is lightening up and he is starting to get cheeks and thunder thighs.  Also, he is so much more alert and has even smiled a time or two. 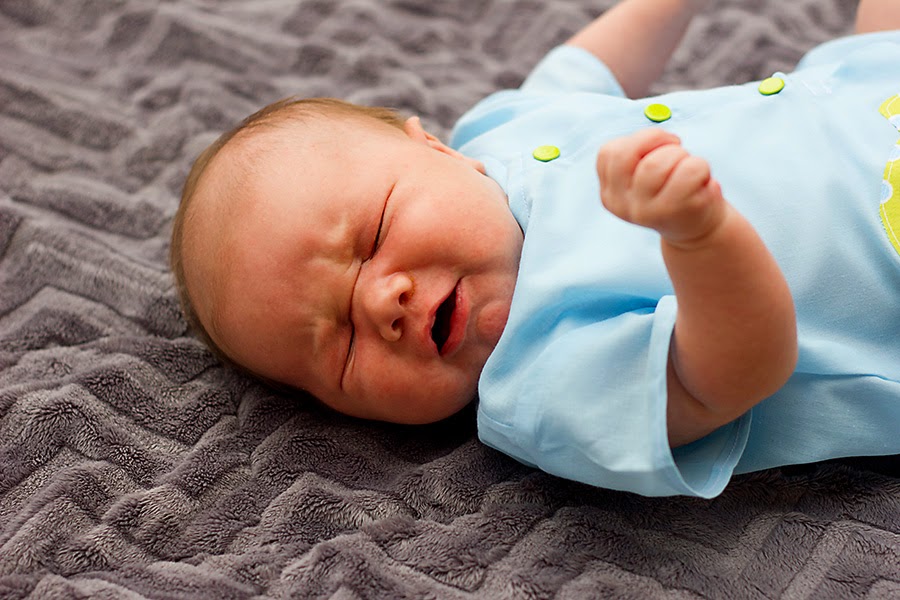 But not today, he isn't a fan of the momarazzi.
Posted by brittney at 10:35 PM 4 comments:

Way back in the first part of June I measured and made Abby a Hide + Seek Tunic.  I wanted to make the dress, but she isn't really in to them right now, and I wanted her to actually wear it, ha!  So I enlisted her help to design it.  She has worn it ever since and so I decided to assembly line two more tops, especially once I realized school starts in less than a month!!

I have been working on those two for over a week now, you know, something about having a newborn... but it was like the stars aligned today- the three youngest were all napping at the same time, Jack had walked to Grandma's and Abby was reading a book, so of course I had to finish up! 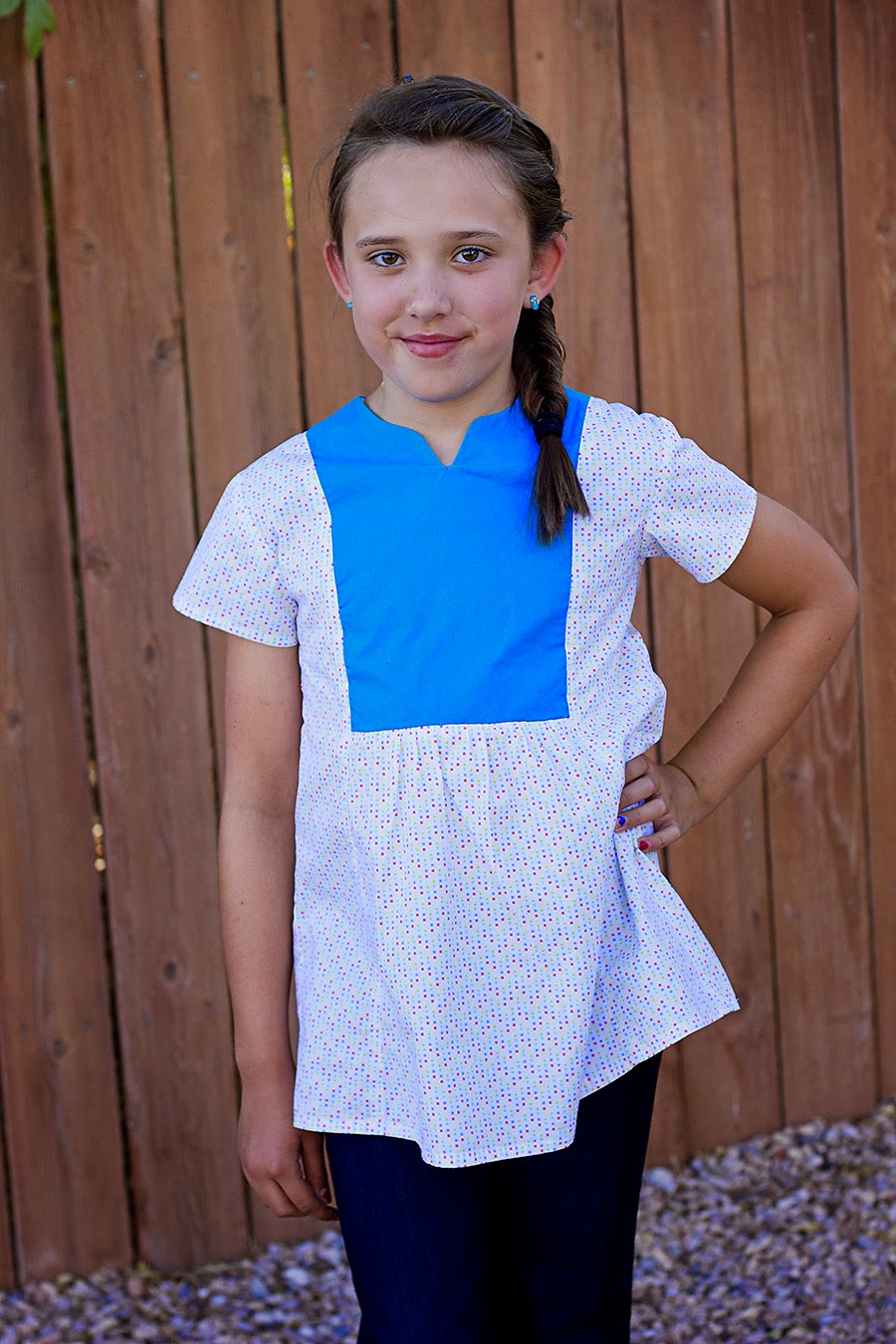 I picked out a stack of fabrics and let Abby choose which she liked best, I think she did a great job.  I actually had suggested a pink, but she picked the blue and I think she nailed it. (it is hard to tell, but some of the little specks are the exact blue she picked). 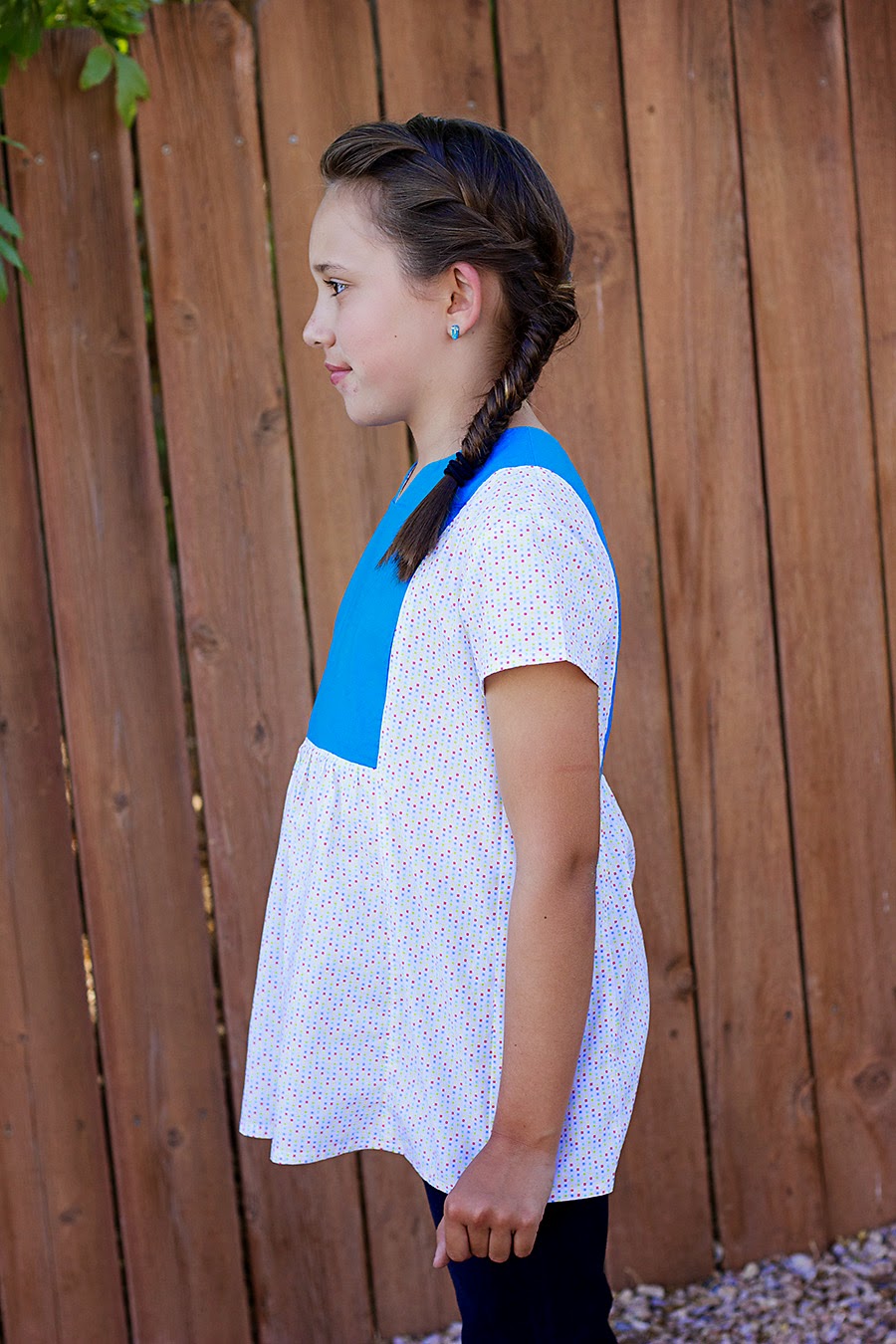 I really enjoyed this pattern, I didn't do any of the bells and whistles (welt pockets) so it was a quick and easy sew. 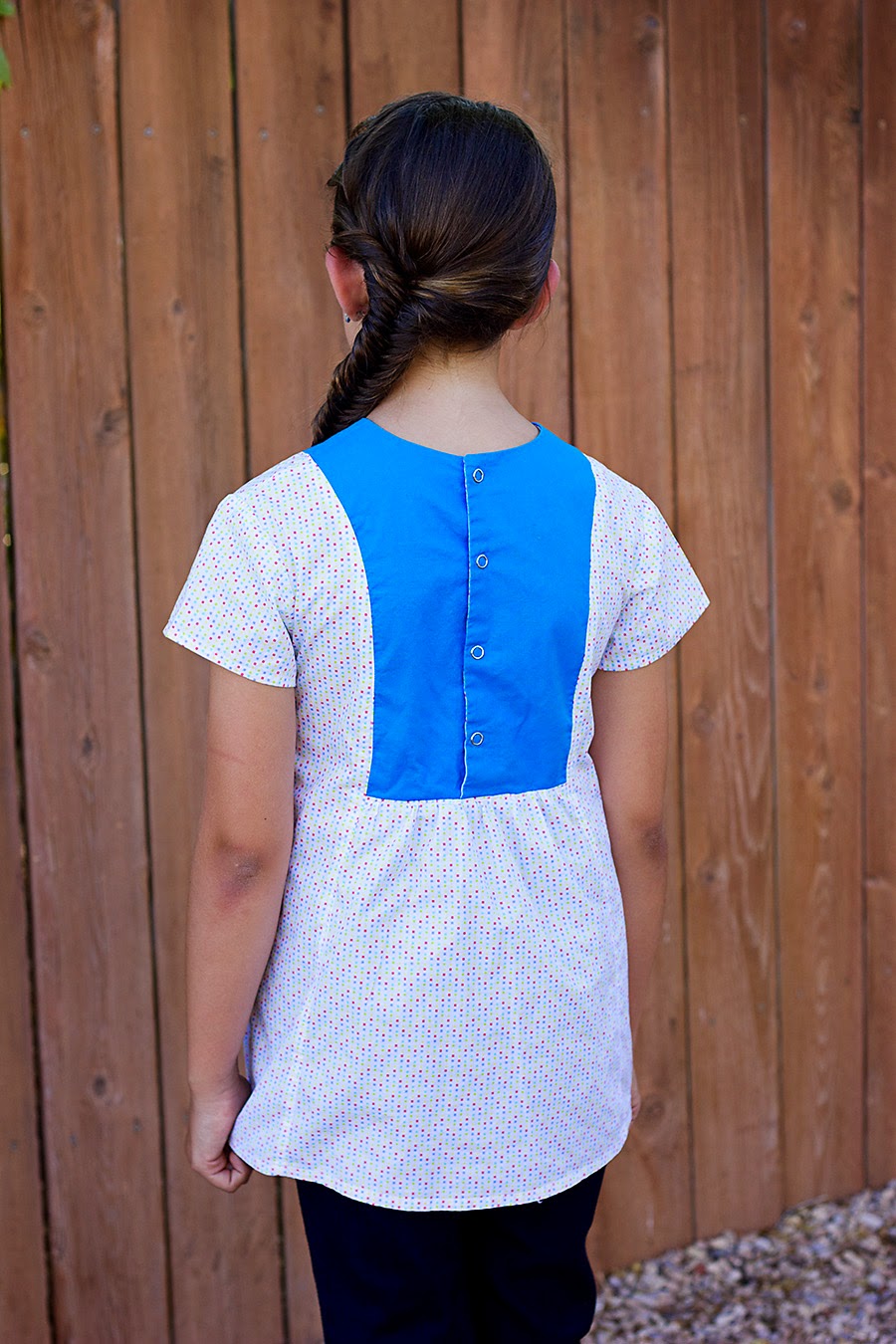 Girlfriend requested snaps as she hates her hair getting caught in buttons. 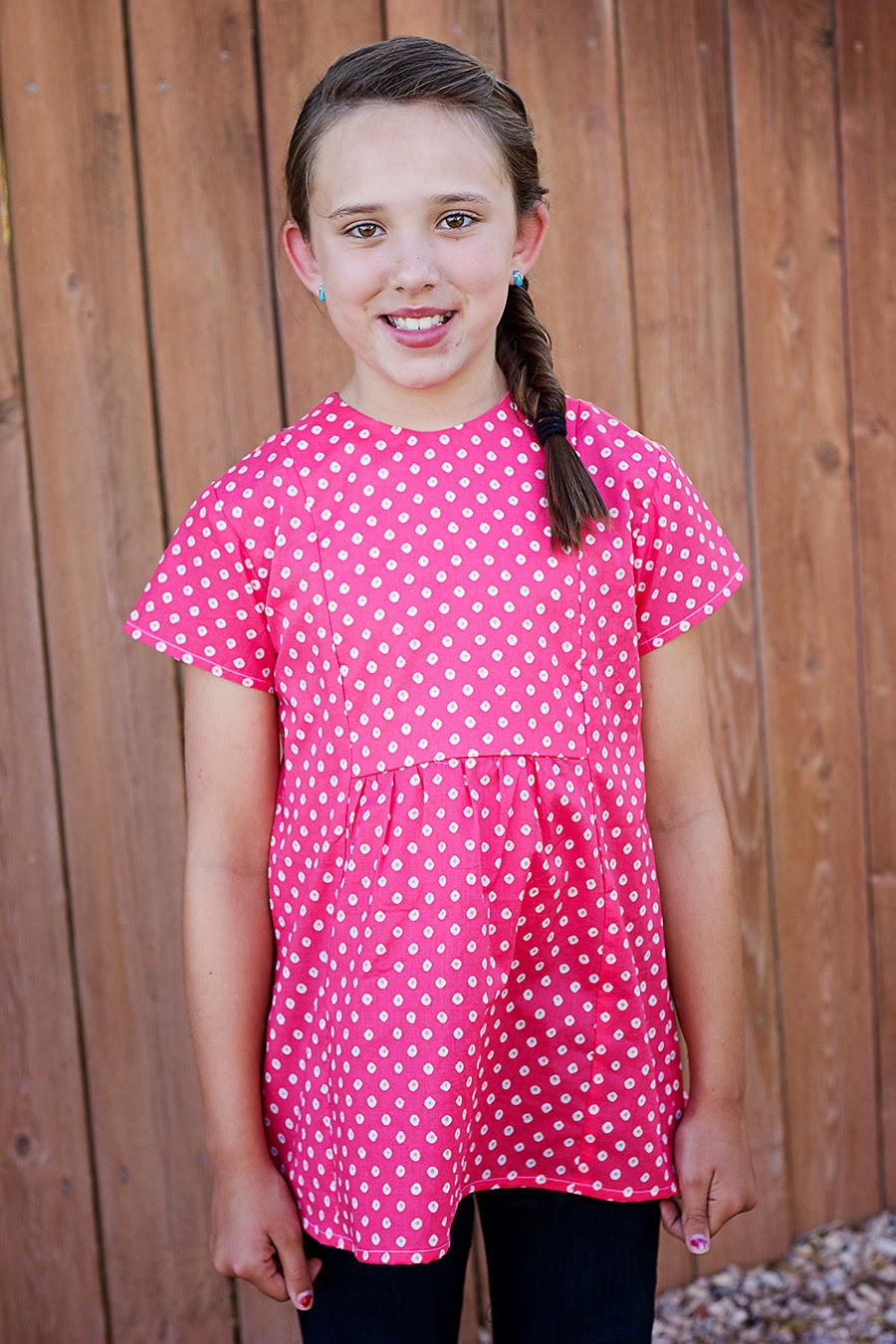 This one is a yummy Lisette lawn that I had used the blue colorway last year for me.  I love this stuff. 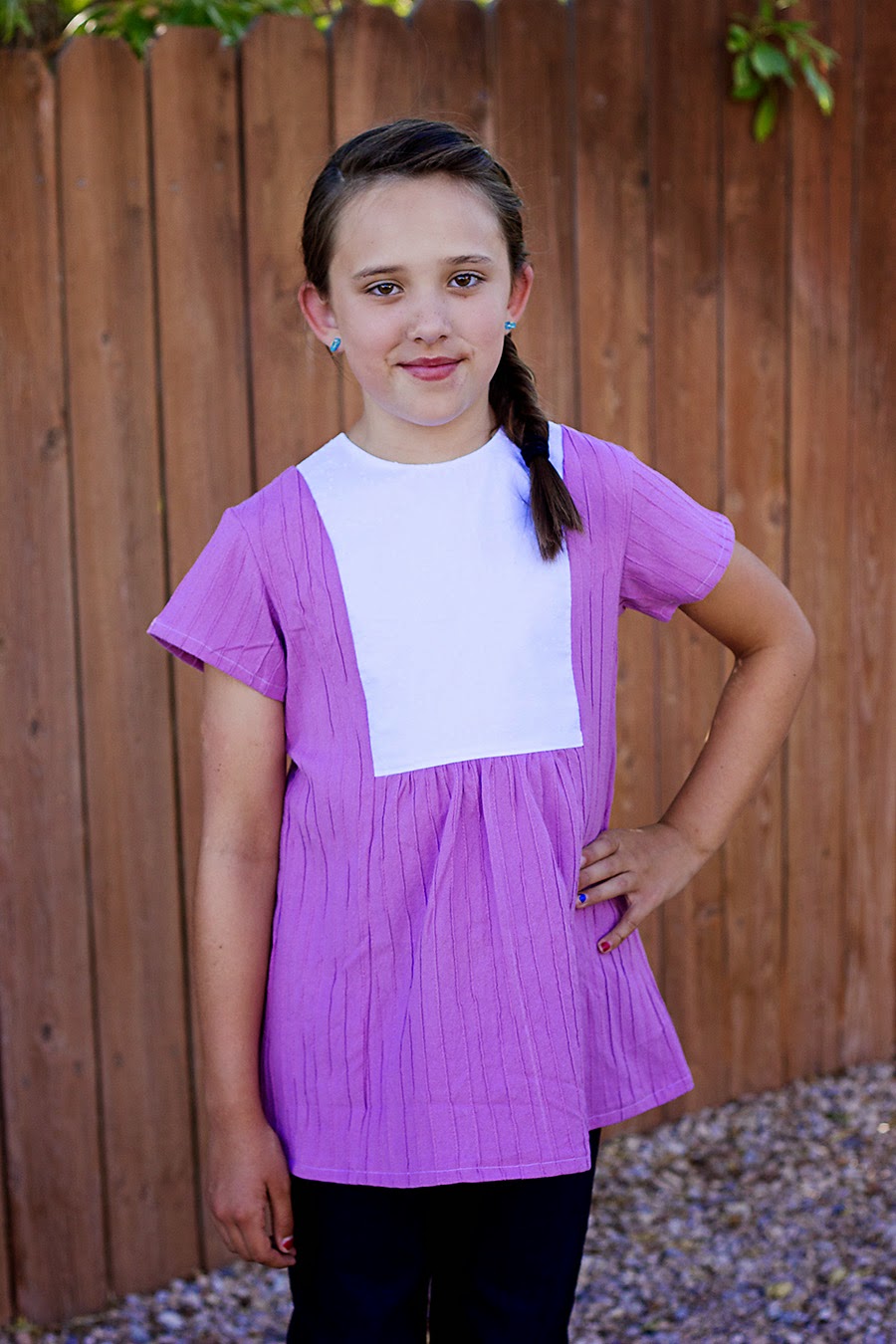 This one is kind of fun.  Before I started sewing seriously I bought this amazing purple fabric on a super close out, it was just so neat and I thought I would make myself a skirt.  Well, that obviously never happened, and it became a top for a kid instead.  I don't think Abby was born when I bought it, or if she was she was only a year or two old.  Aaah, stash fabrics.  In fact, all of these were stash fabrics. That makes them free, right? ;) 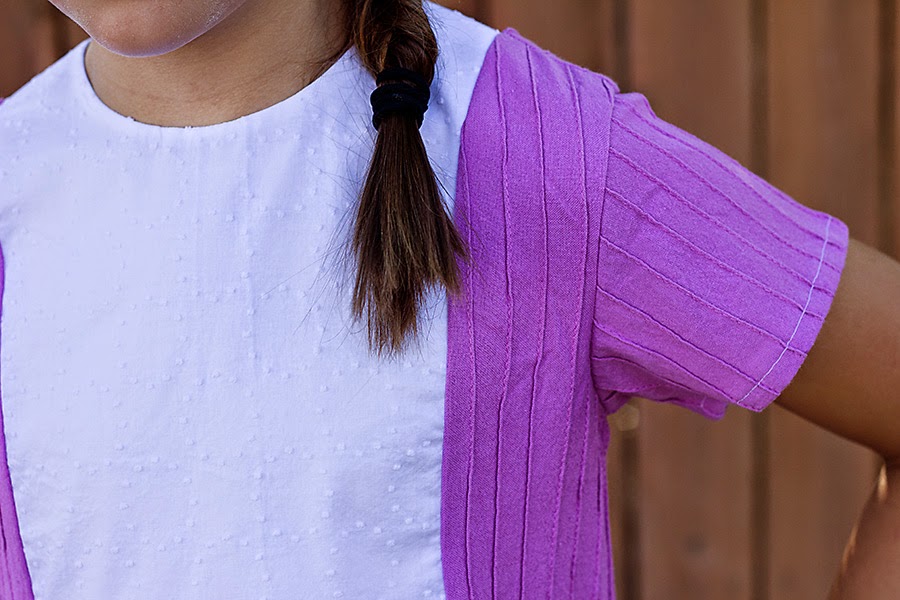 The white with raised dots was bought originally to make her baptism dress, but I ended up using this gorgeous eyelet.

I swear that I used purple thread, not the exact purple as I didn't have any on hand, but it looks like it is glowing here, ha!

She is so cute and told me she likes each of them for different reasons.  The first one is just so pretty, the second is so soft and she loves the texture of the third.

I didn't measure her in between the first of June and the first of July and it turns out she went up a whole size, what?! So she wont get as much wear as I had hoped, but they are a good start to the school wardrobe.
Posted by brittney at 7:33 PM 5 comments:

I have managed to sneak in an itty bitty amount of sewing time since Sam was born, first up was a new swim suit for Abby.  She and Jack were headed to Lake Powell and I wanted her to have a rash vest for a little more sun protection (Jack has a purchased one). 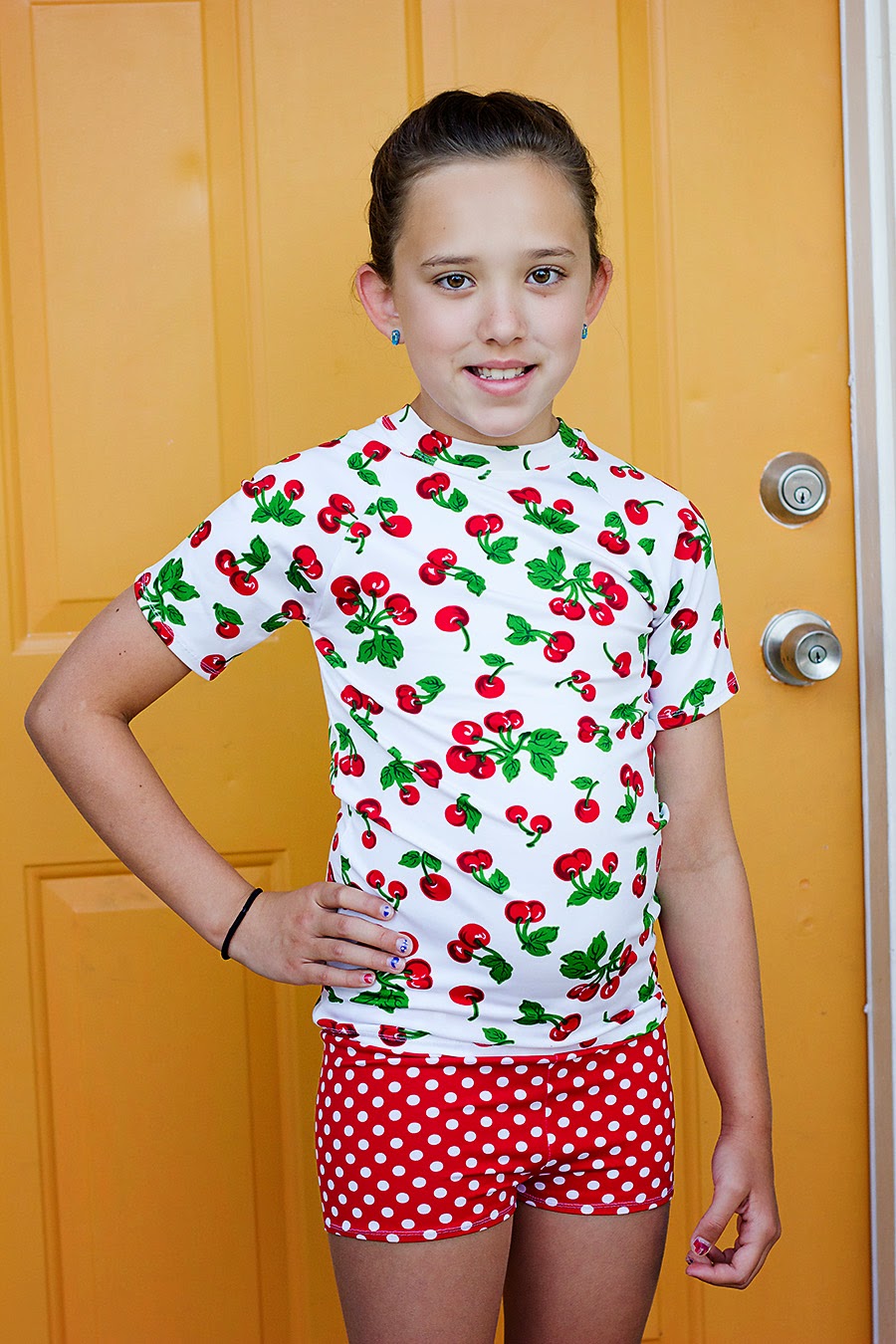 I wanted to use the Field Trip top, but I didn't have time to make more than one if it came out too big, so I used the Peekaboo Pattern Hang Ten and for the bottoms the Coney Island.  I made the CI last year and she wears that one all.the.time. It is starting to wear out and the bottoms are getting too small.  I made the size 8 for both pieces, I think they fit well, but she says she got a rash the first day from the bottoms being too big and the way they rode up when jumping in.  Who knows, I wasn't there and never saw the rash.

I am also working my way through 2 Hide-and-seek tops (and have been for over a week) that we are both excited about, if we manage to make it out of the three week growth spurt alive...
Posted by brittney at 12:34 PM 2 comments: 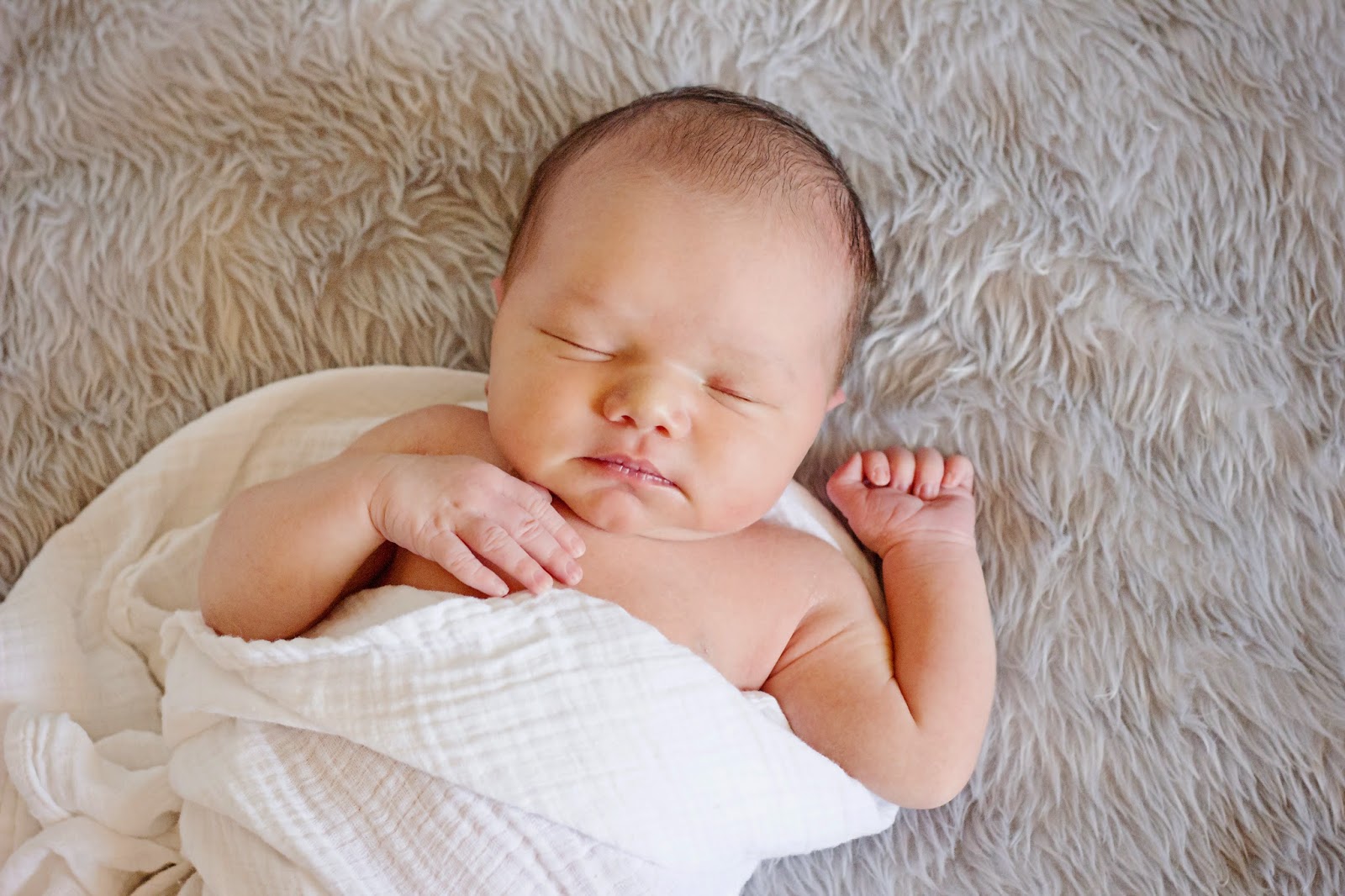 We are surviving, hoping I am past the worst part (but isn't there a growth spurt around 3 weeks?).  Luckily the kids are out of school so the older two can help with the twins and that means I can usually sneak a shower in before the twins go down for a nap in the afternoon.

He nurses like a champ and is growing perfectly, in fact, at his 1 week appt (actually at 11 days) he had just regained his birth weight and when I went in the next week (at 18 days) he had shot up to 10lbs6oz!  That was 1lb3oz in a week!

Luckily he hearts his pacifier because if he is awake and doesn't have something in his mouth he is angry.  Very angry.  Ha!  But we sure love him.


Being he is my last little one, I am trying to take life slowly and soak up every little moment.

P.S. taking your own newborn photos is exhausting!  I have done it before for friends and family so I thought it wouldn't be a big deal to do my own, but it is so nice to have someone to pass the baby to while you are setting up a shot or to calm the babe down.  So I didn't get very many (not nearly as many as I had planned in my head) but I got some that I love, so that's what counts, right? 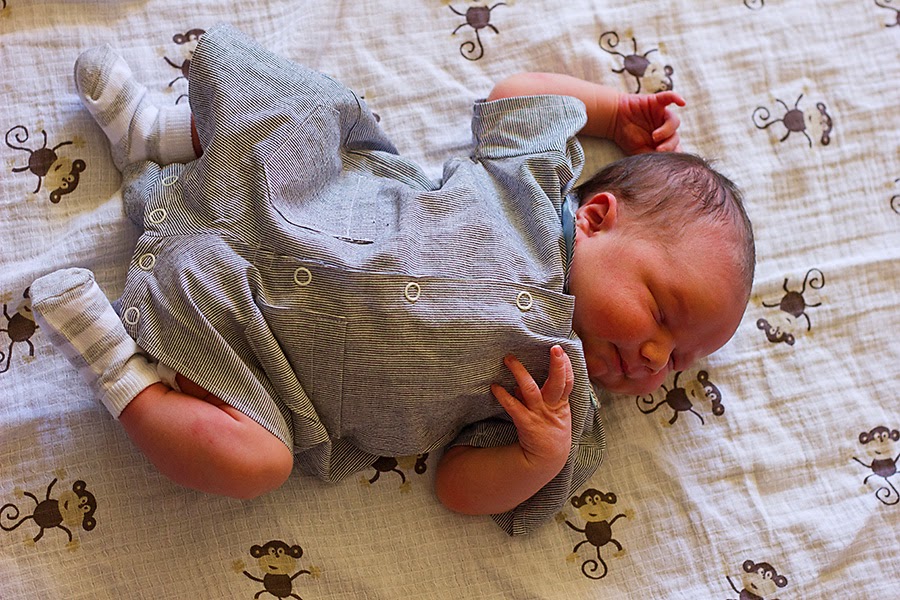 Remember this little outfit?  He wore this one home from the hospital, and this is him at one day old. 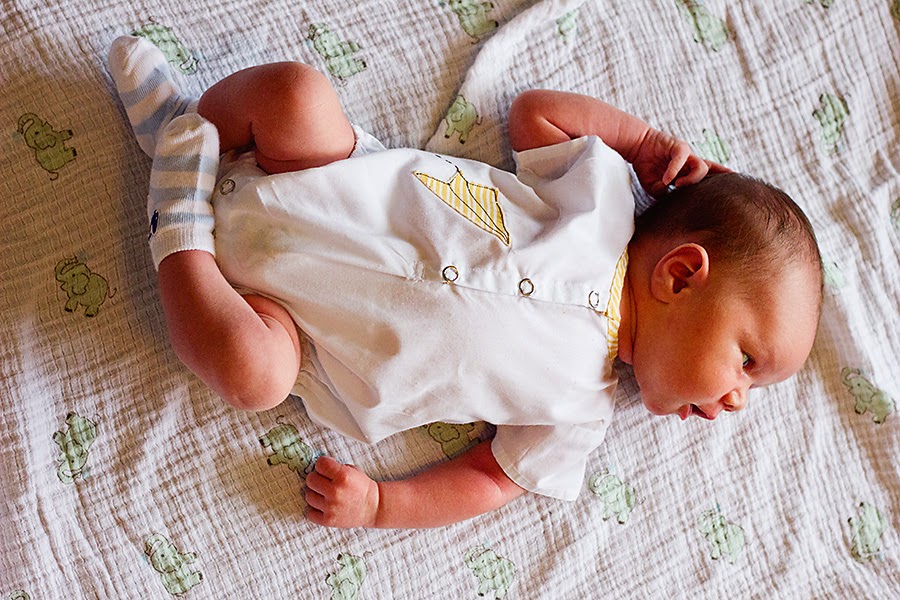 And this one?  It is pretty much my favorite thing to put him in, he gets compliments every time he wears it out of the house.  He was a day shy of 2 weeks here. 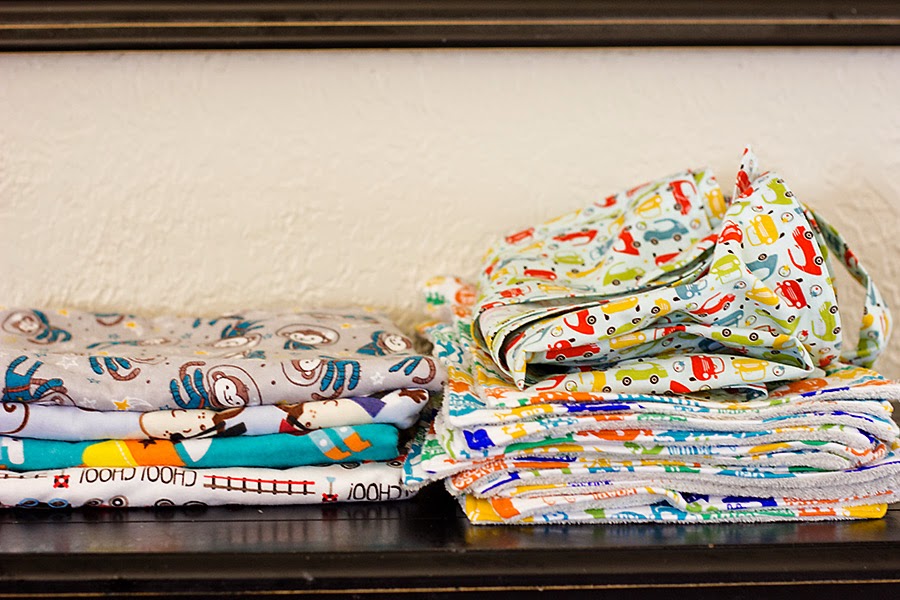 A few weeks before he was born I slowly worked on some essentials.  I never managed to blog them (or the 4 maternity tees I made either), so here they are now. 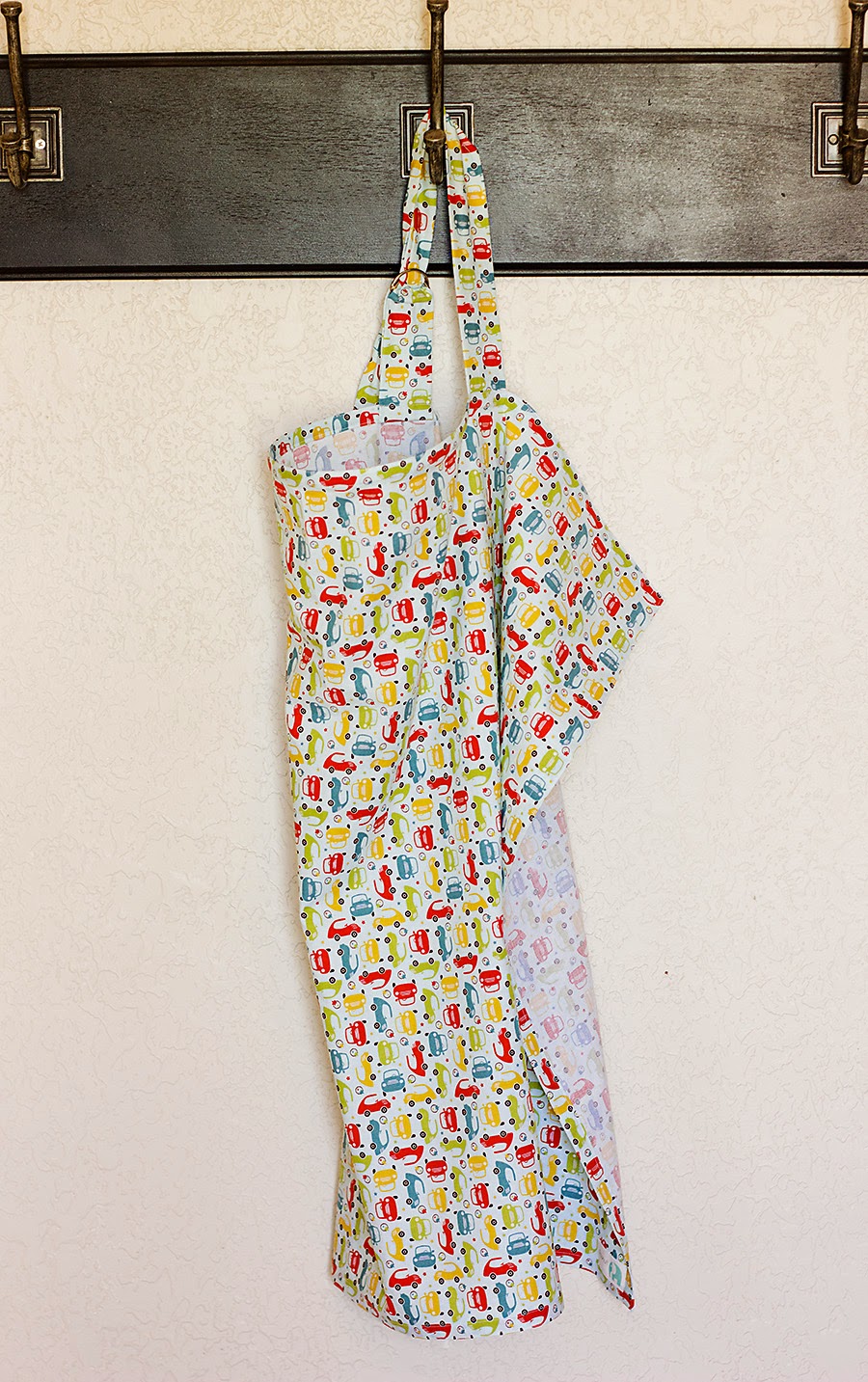 A nursing cover.  I looked at a bunch of different tutorials online and combined my favorite parts about them, nothing special, but it works great.  I have only used it once at church this week, but it did the job great. 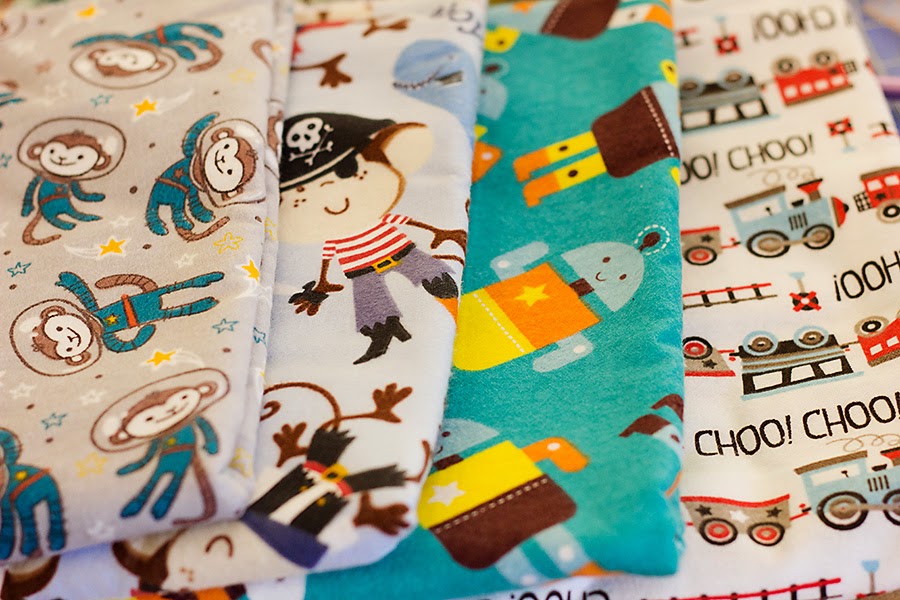 I made these single layer receiving blankets by making them square (either 42x42 or 44x44), rounding the corners and doing a rolled hem on the serger.  They are really nice to have.  I did end up splurging on a set of Aiden + Anias blankets (which I totally love and recommend, definitely worth the $), but he spits up a crazy amount and these get plenty of use too as there are always a few in the laundry. 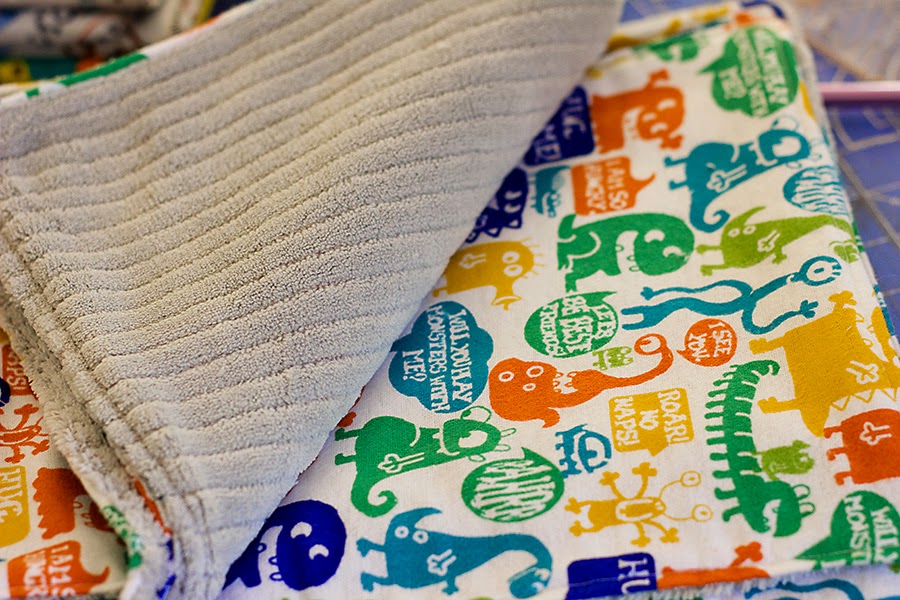 Then some burp cloths.  Not just some, like 18, I think.  They were crazy tedious, but I am so glad I made them, we go through so many!  I just used some flannel on one side and chenille on the other.

I have managed a bit of sewing here and there, turns out school starts in less than a month! AAAAGH!  So even though it takes me a week for one item worked on in 5 minute spurts, it has been nice to sort of feel creative again.  I did manage a whole swimsuit for Abby yesterday though (she and Jack are headed to Lake Powell as I type), but more on that later, someone's starting to stir...