As mentioned earlier, I had these A-line Dresses from Lily Bird Studio to photograph.  The twins were *somewhat* cooperative today.  They are much easier to take pictures separately, but I do love the ones I get of them together. 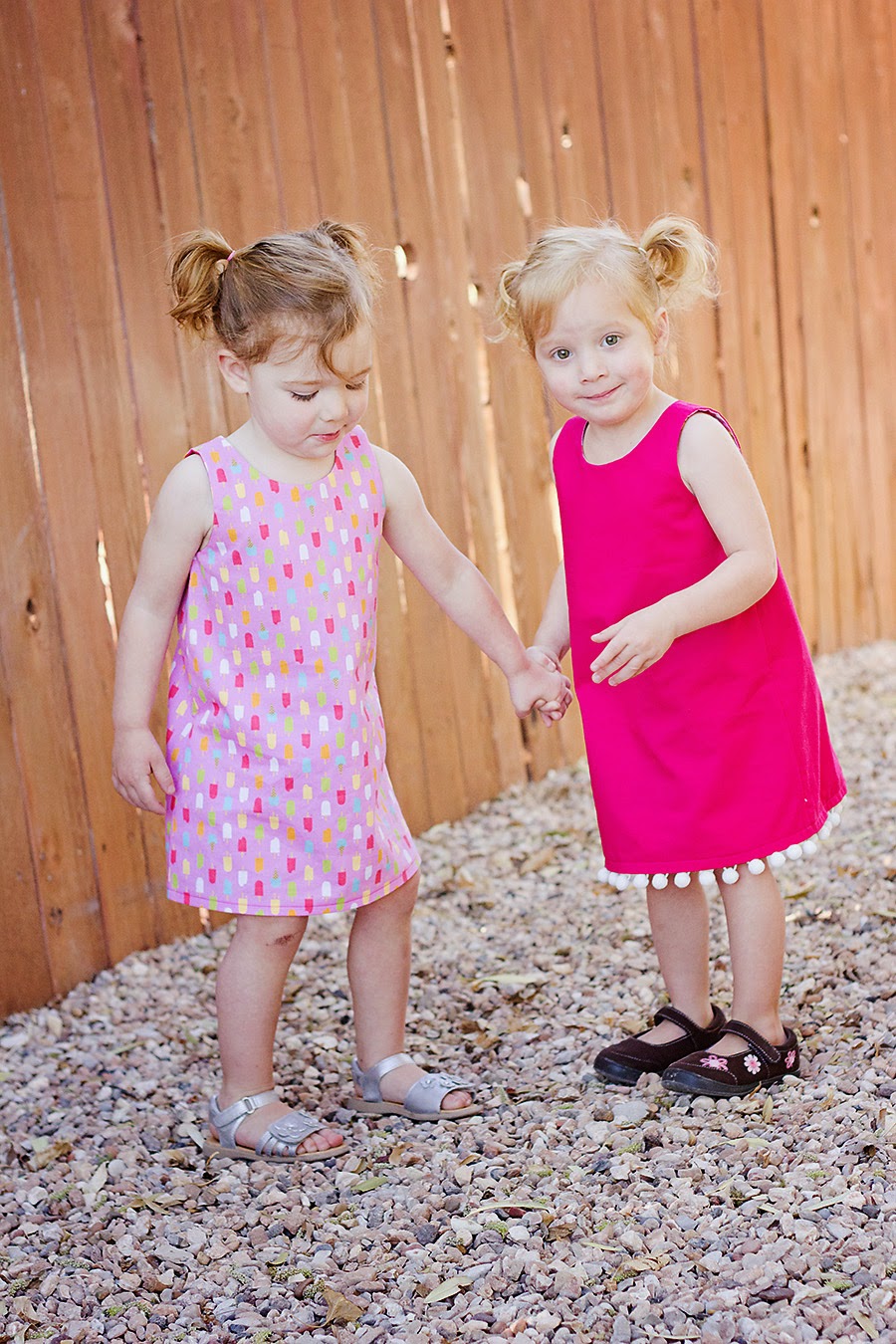 George is usually the good one, she will keep focused on the camera, though she gives me some really funny faces about half the time. 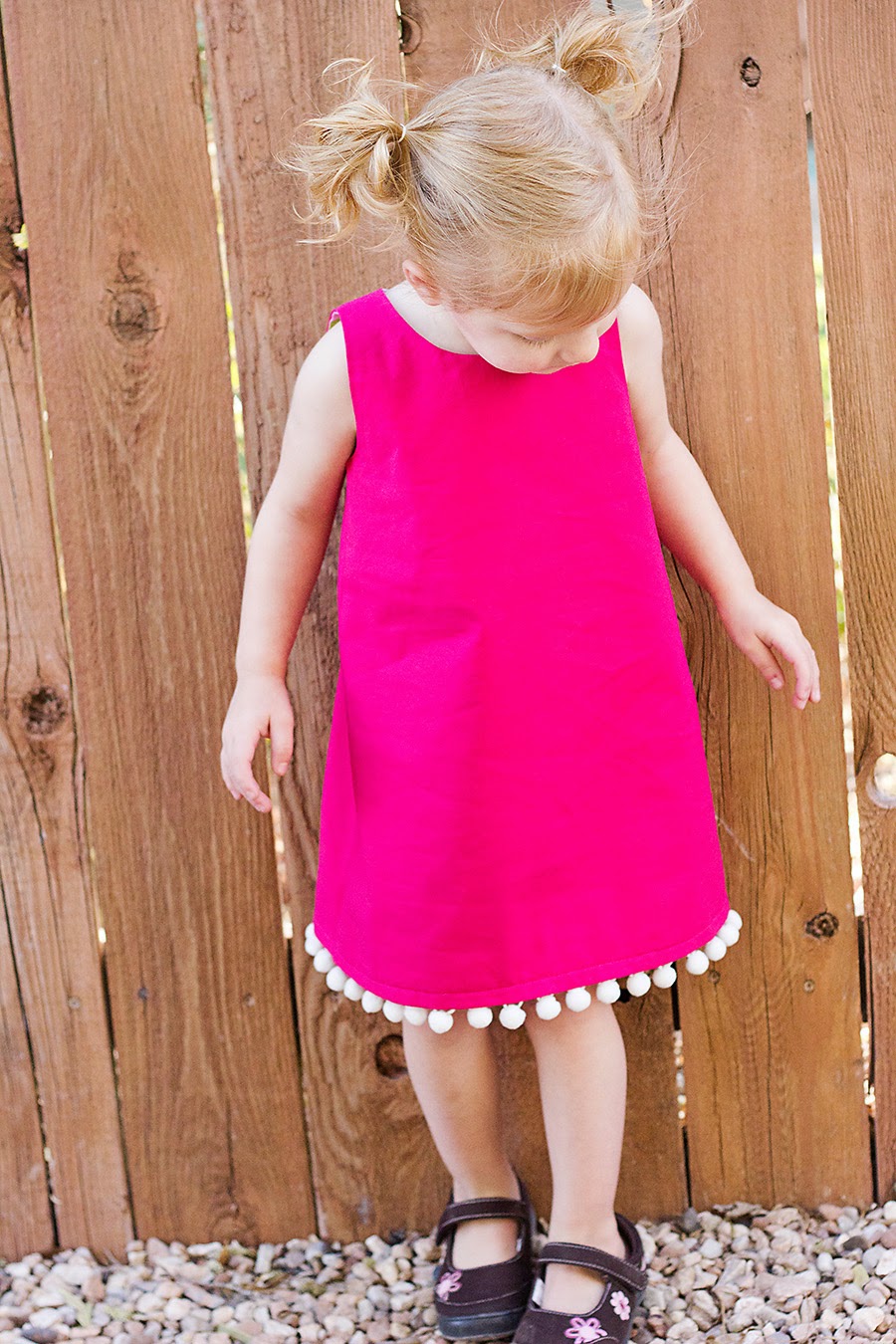 I knew there would likely be a fight over the dress with ice creams so I added some fun little bobble trim to this plain one.  While she still wanted the ice cream dress, she warmed up to this one.  Um, it could have also been the promise of a doughnut hole if she let me take her picture... 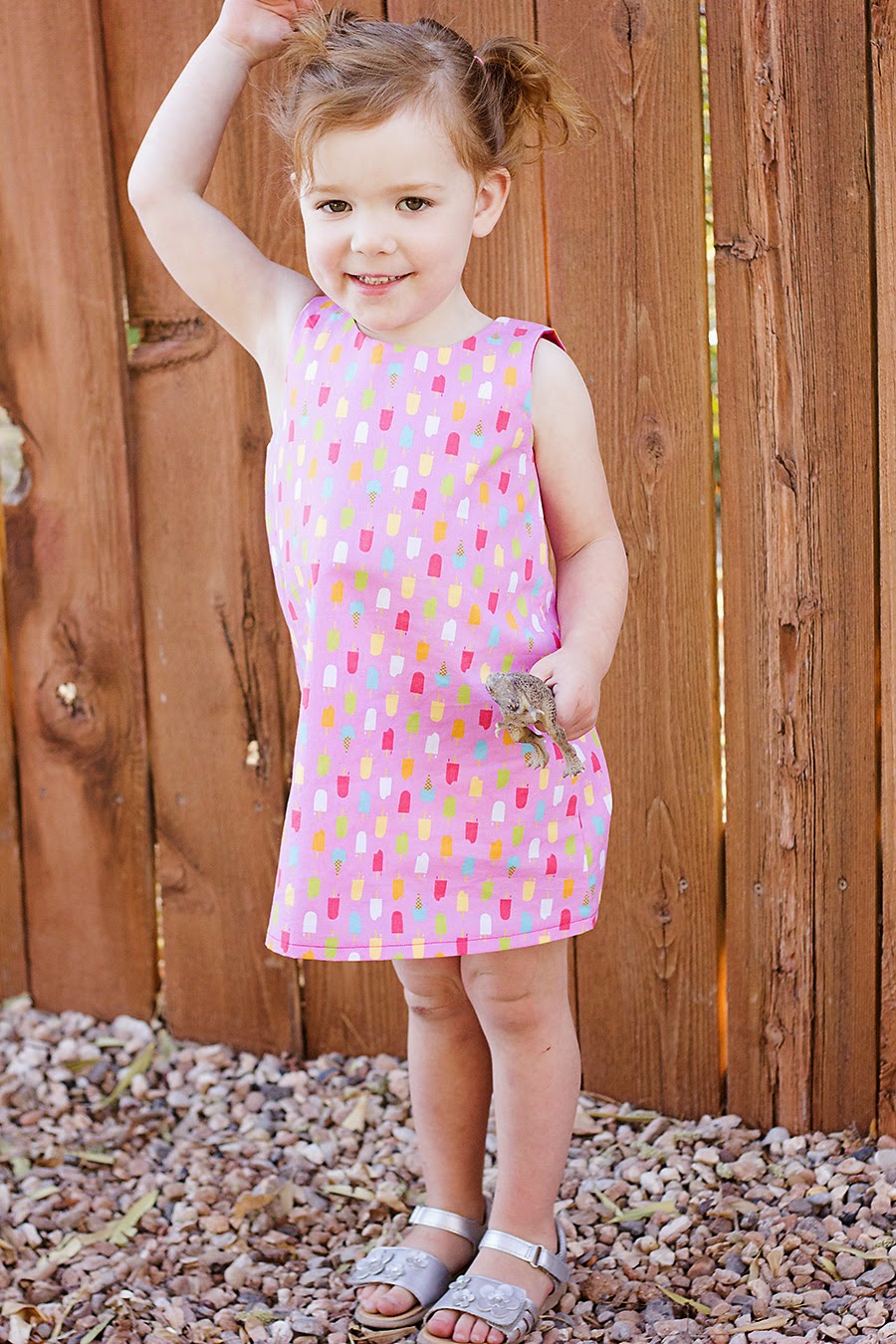 Look!  Elizabeth is actually looking at the camera- and smiling!! That almost never happens. 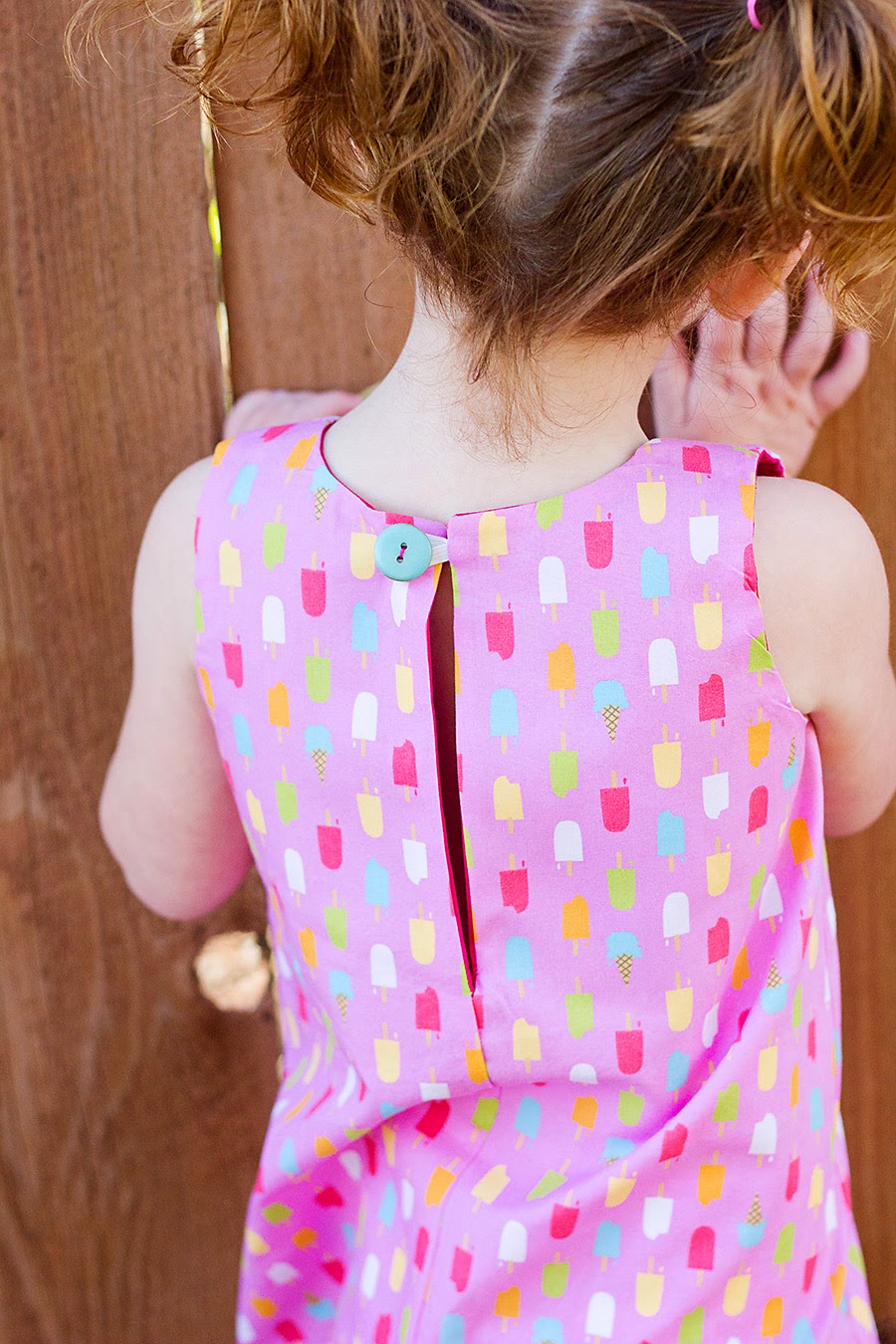 She enjoyed peeking at the neighbors yard through the cracks and holes in the fence. 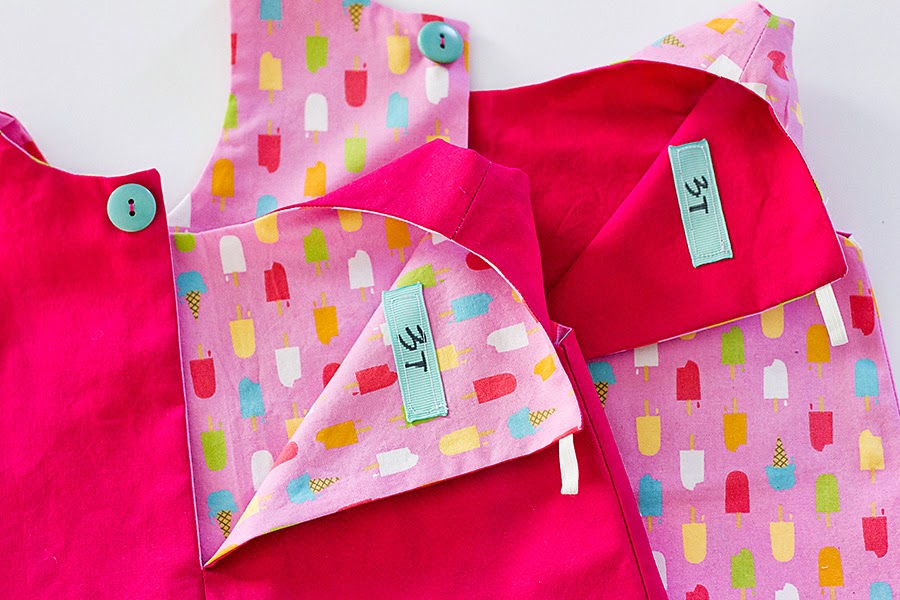 Excuse the wonky stitching on the ribbon it was shifty... and the permanent marker tags, I have some how managed to misplace all my 3T tags!

The dresses are partially lined and I chose to line each one with the opposite fabric.  These are actually a size 2 but I forgot and am not unpicking my ribbons. 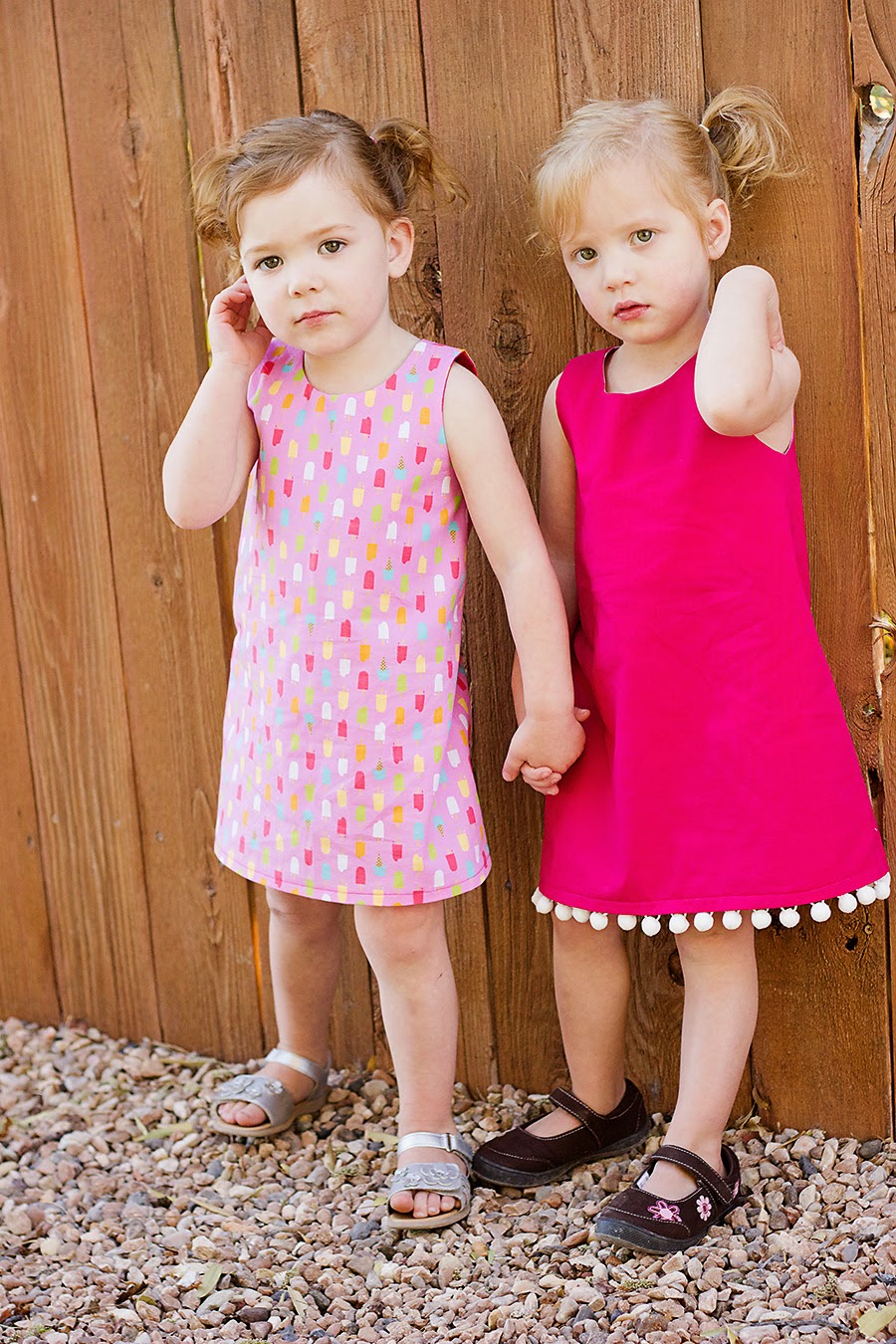 They have seriously sprouted up in the last few weeks.  They have worn dresses all this week and every time someone different has commented on how they are outgrowing them.  I added a little length but I think I could have added more, especially if I wanted them to last longer.  That's alright though, just means more little girl sewing down the line;).

The pattern is super easy, in fact, I think it would be a great beginner pattern.  I had both cut and sewn within a couple of hours.

Email ThisBlogThis!Share to TwitterShare to FacebookShare to Pinterest
Labels: for the twins, Lily bird studio

It's getting warmer here and that means we are in need of some shorts around these parts.  Around the time I was testing the Laura dress/tunic for The Lily Bird Studio she also was requesting a few people to sew up some of her patterns to get more pictures so I volunteered for a pair of shorts and an A-line dress (that pictures will be coming for when the twins are up to it). 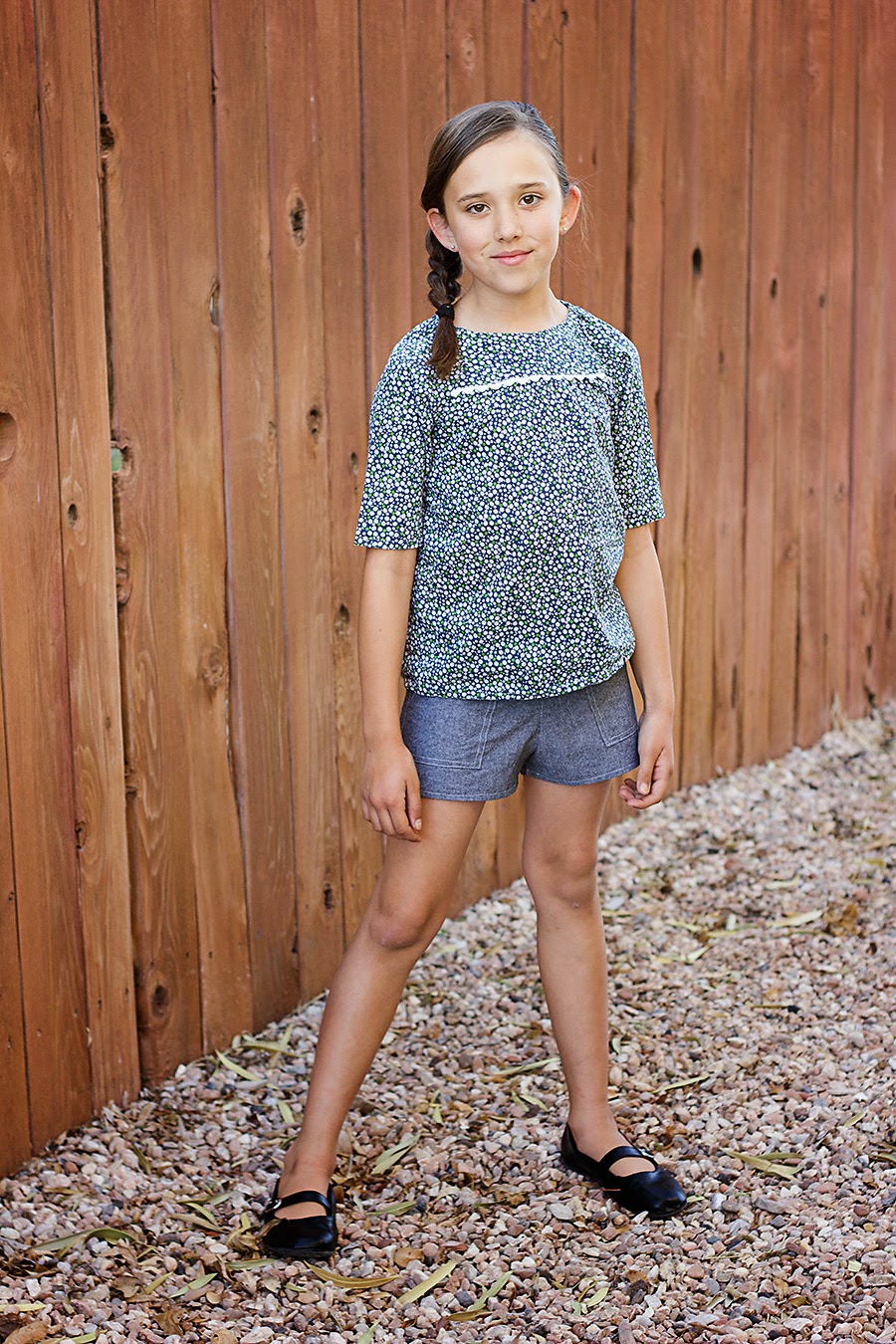 These are the Shorts with pockets in size 8 which is what she would wear in RTW if she wasn't so darn tall for her age, ha! If I buy any bottoms for her they have to be a 10 for the length, which means they are huge on her in the waist.  Sadly that is what she has been dealing with for pants all winter as I wasn't feeling up to sewing much due to being in my first tri with little brother. 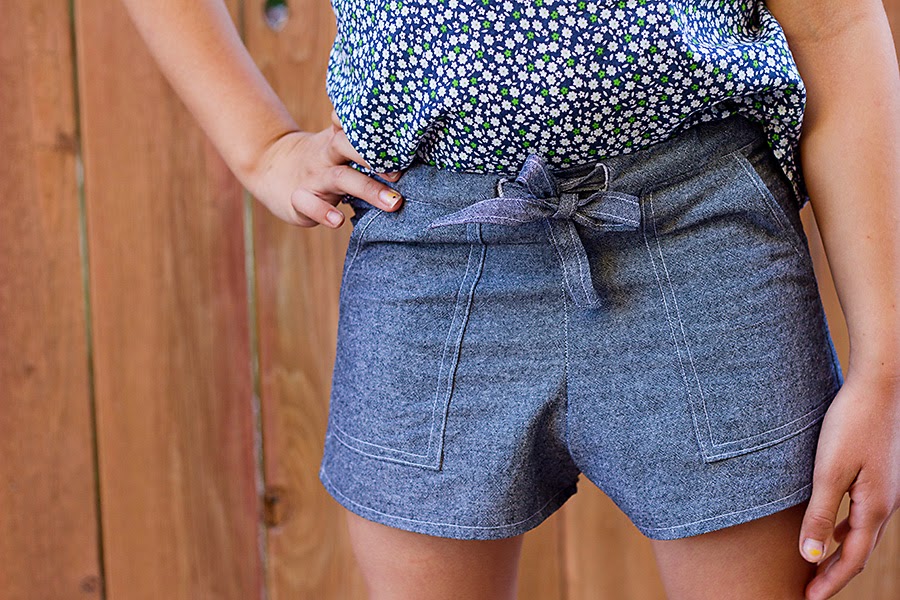 I chose chambray, I think I could use chambray on everything but try to limit myself.

They have elastic for the waist attached to some strings of fabric for a faux drawstring look.  I am struggling to tie it right... (that's all me, not the pattern) 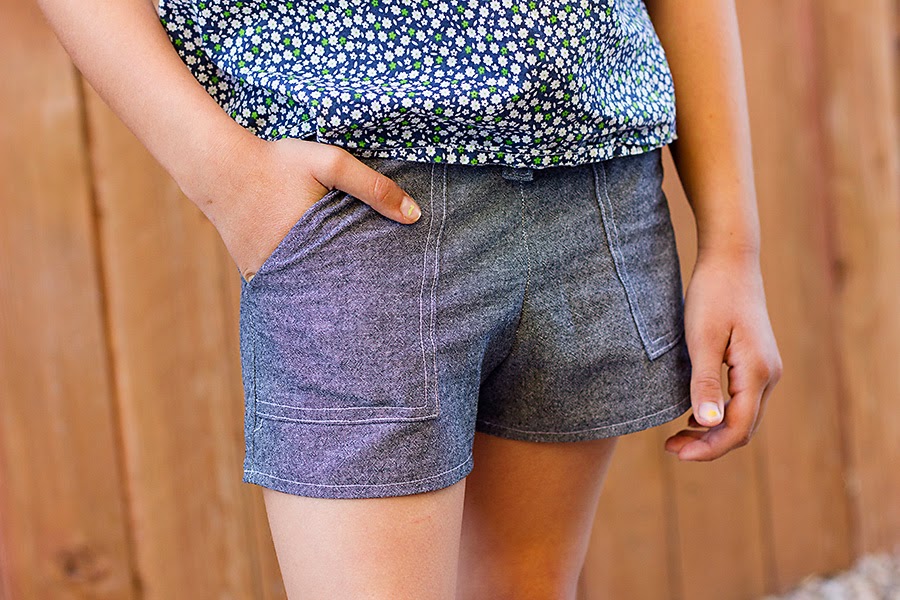 I am not sure if she can get away with them for school due to the length, but she is going to try as they are her "most comfortable pair of shorts ever!".

She is also wearing her Classic Picnic blouse that she has pretty much worn to death.  She will wear it 2-3 times a week if it is clean, ha!  It's getting a little short so she will soon need a new one, but who can blame her with that yummy lawn?

Don't forget, now until March 26th you can get 20% off your whole purchase of $6 or more by entering the code sewing4four at the Lily Bird Studio's website!
Posted by brittney at 8:01 PM 6 comments:

Laura Dress and a tunic.

I was asked a while back to test a new pattern for Lily Bird Studio called the Laura dress and tunic.  I jumped at the chance when she sent along a picture of it, so cute!  So I decided that the twins would get one of each, a tunic and a dress. 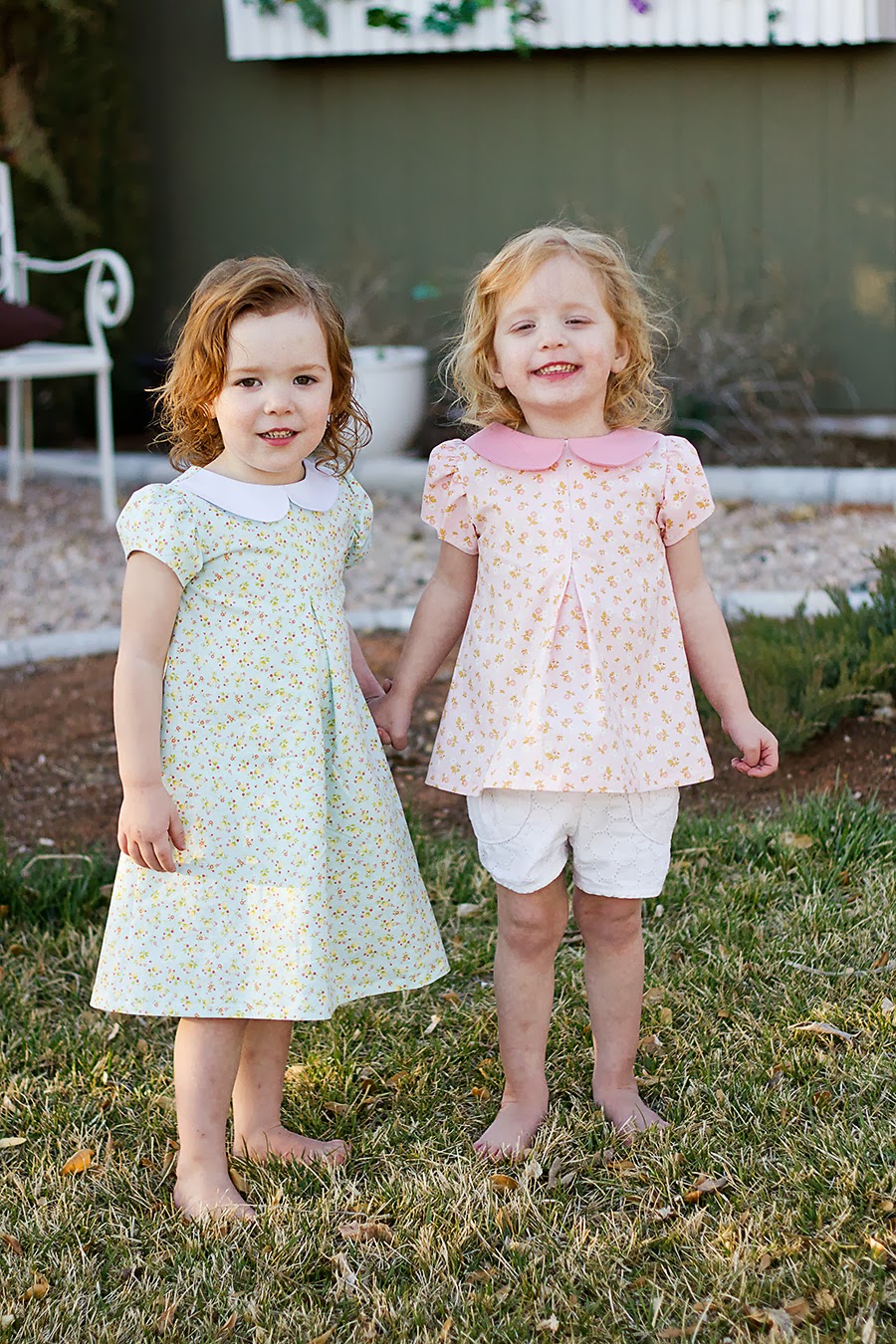 The box pleat kills me dead.  I didn't have time before leaving on vacation to get a better location for a shoot than my front yard, so I thought why not pack them and get some in a place I wont ever get to shoot again?

Yeaaaaah, Elizabeth was less than cooperative. 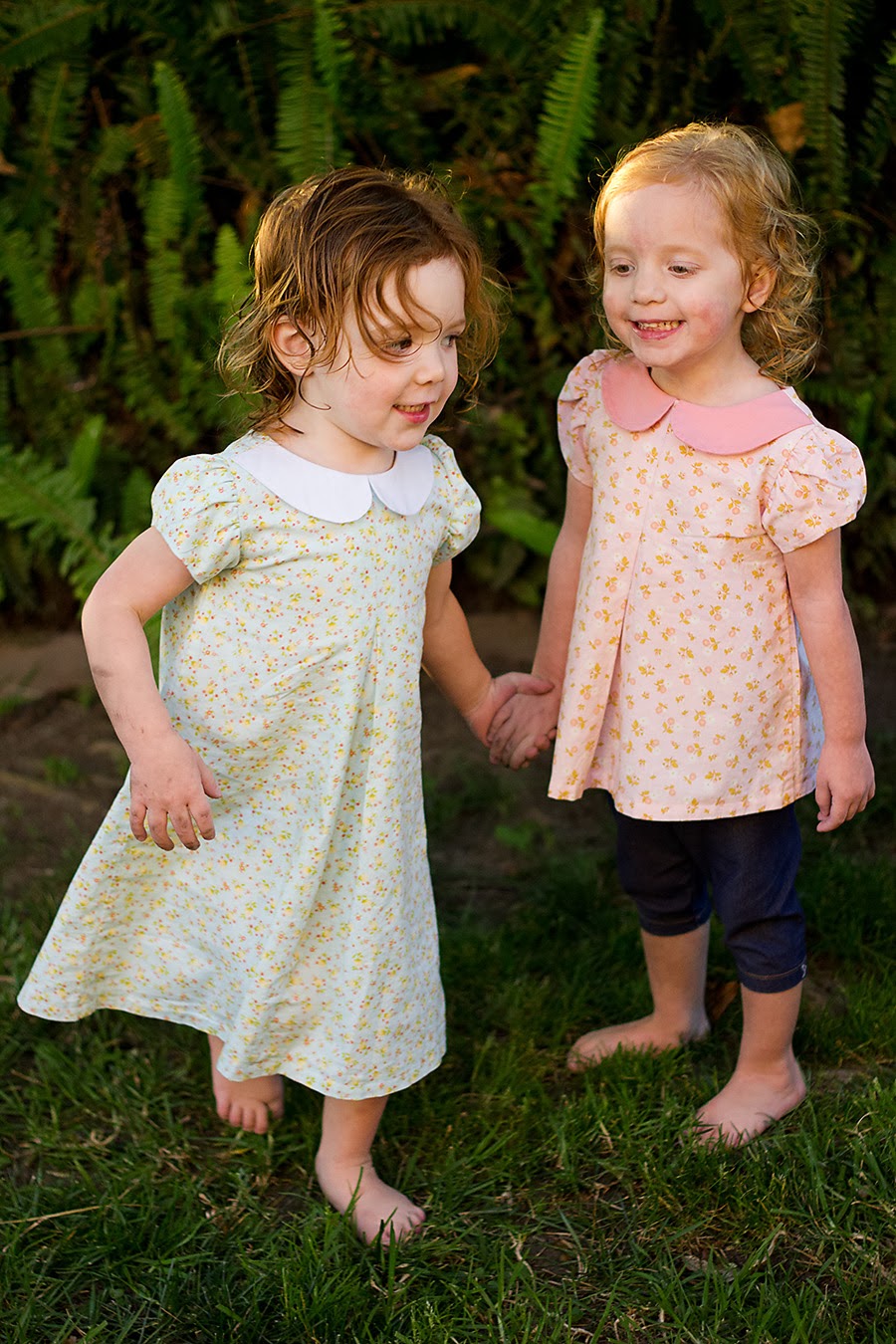 To be fair though, these were taken after she had just had a bath after seeing the ocean for the first time. 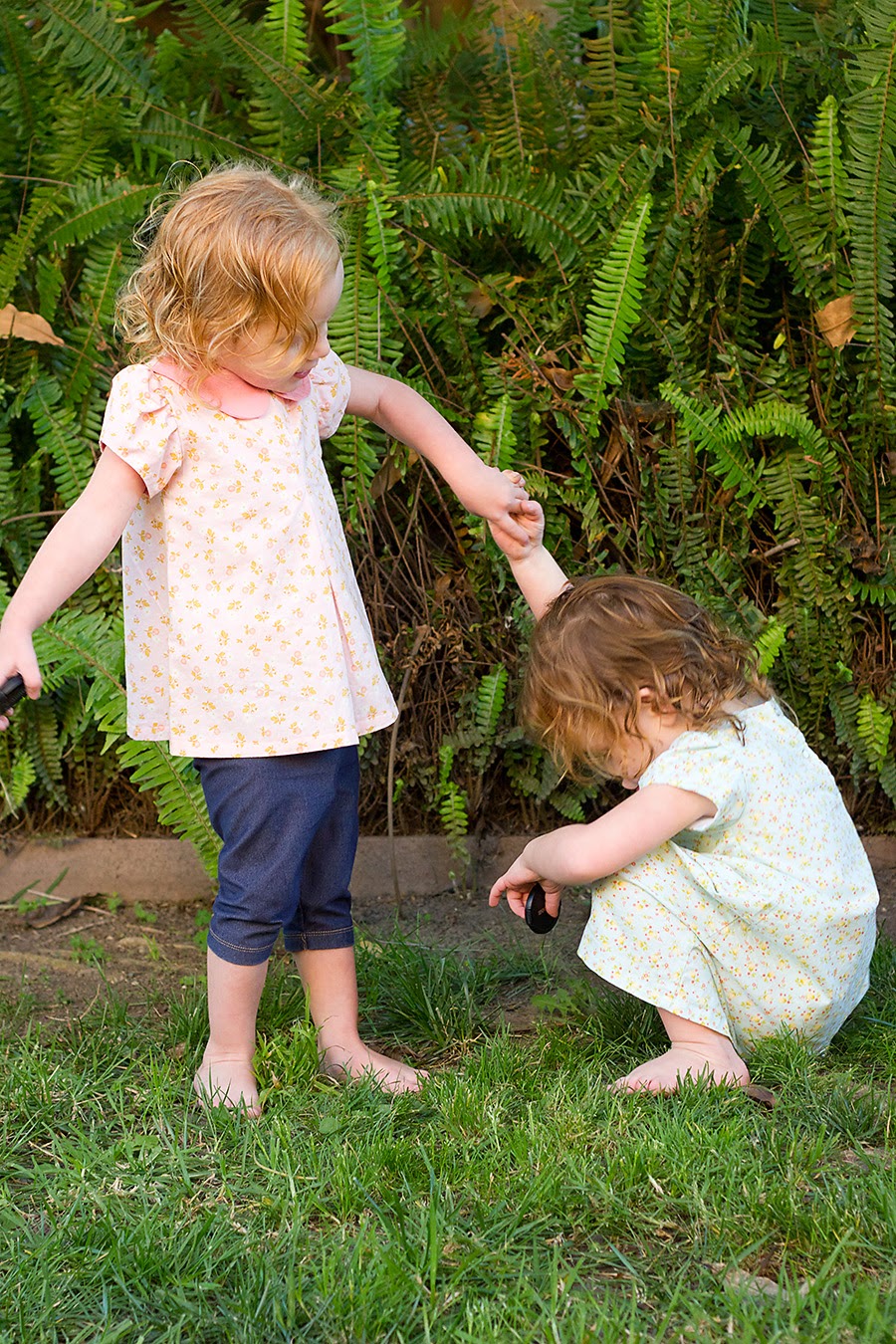 No matter how many fruit snacks or pleads from me would work on her.  Even George was trying to tell her to stand still and smile, ha! 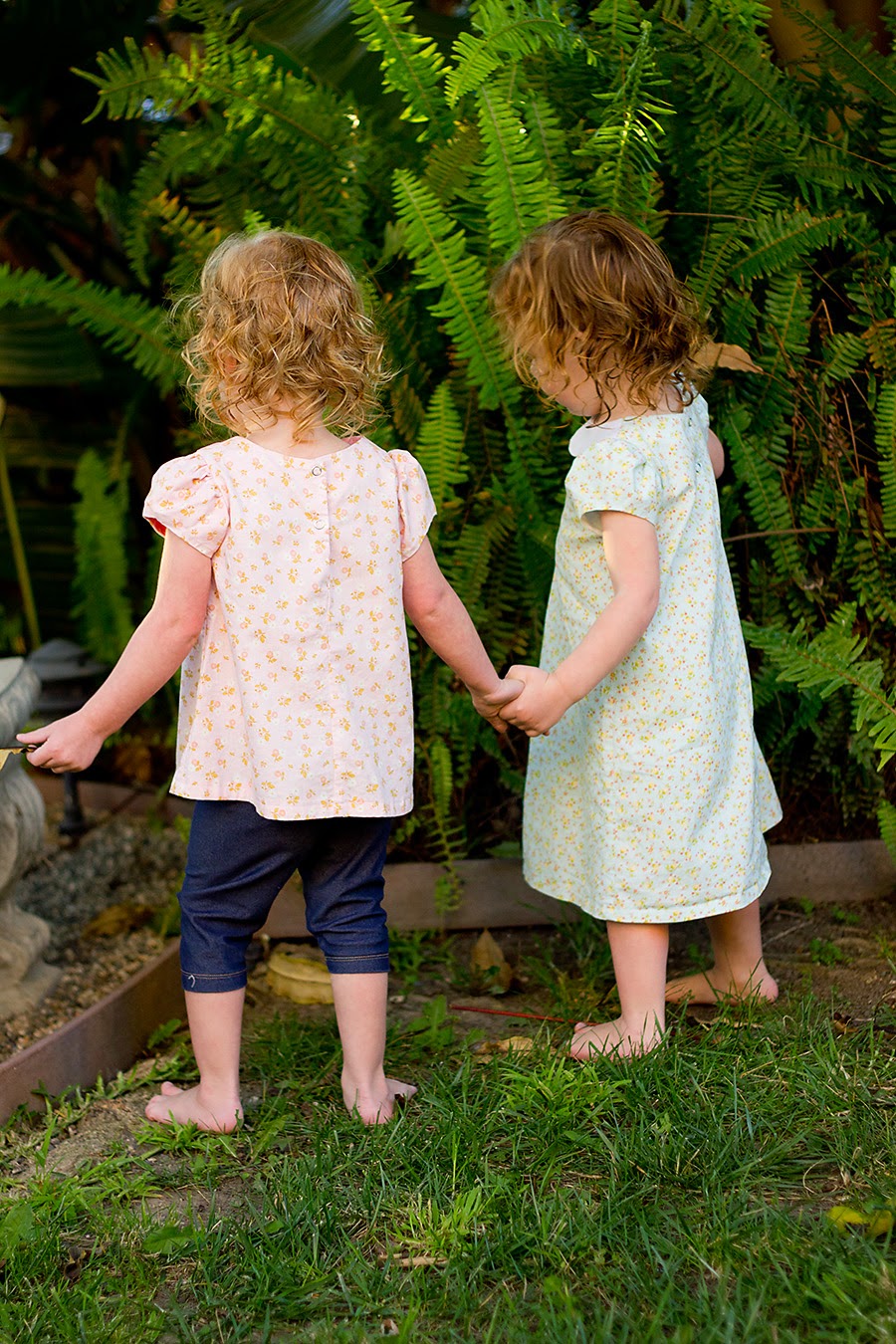 She wasn't having any of it though. 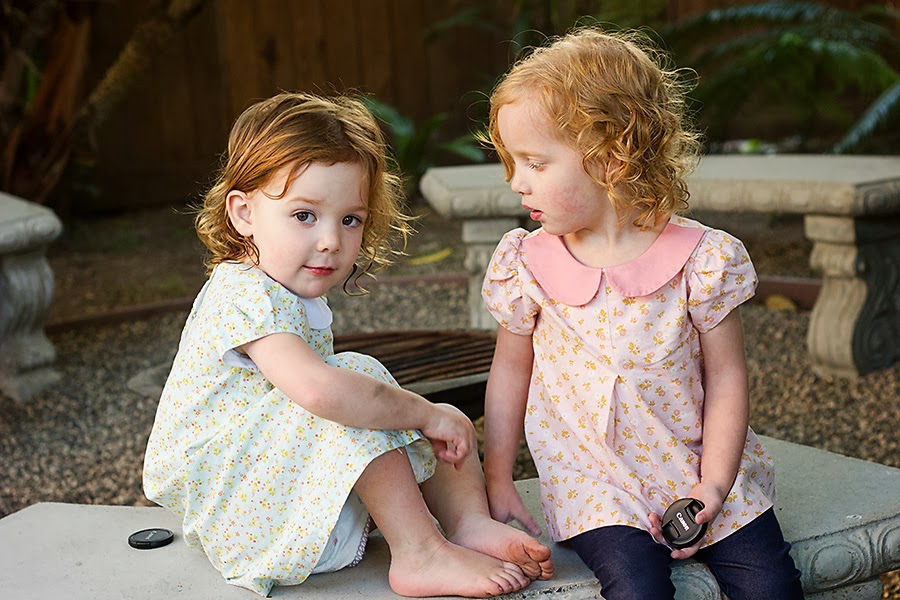 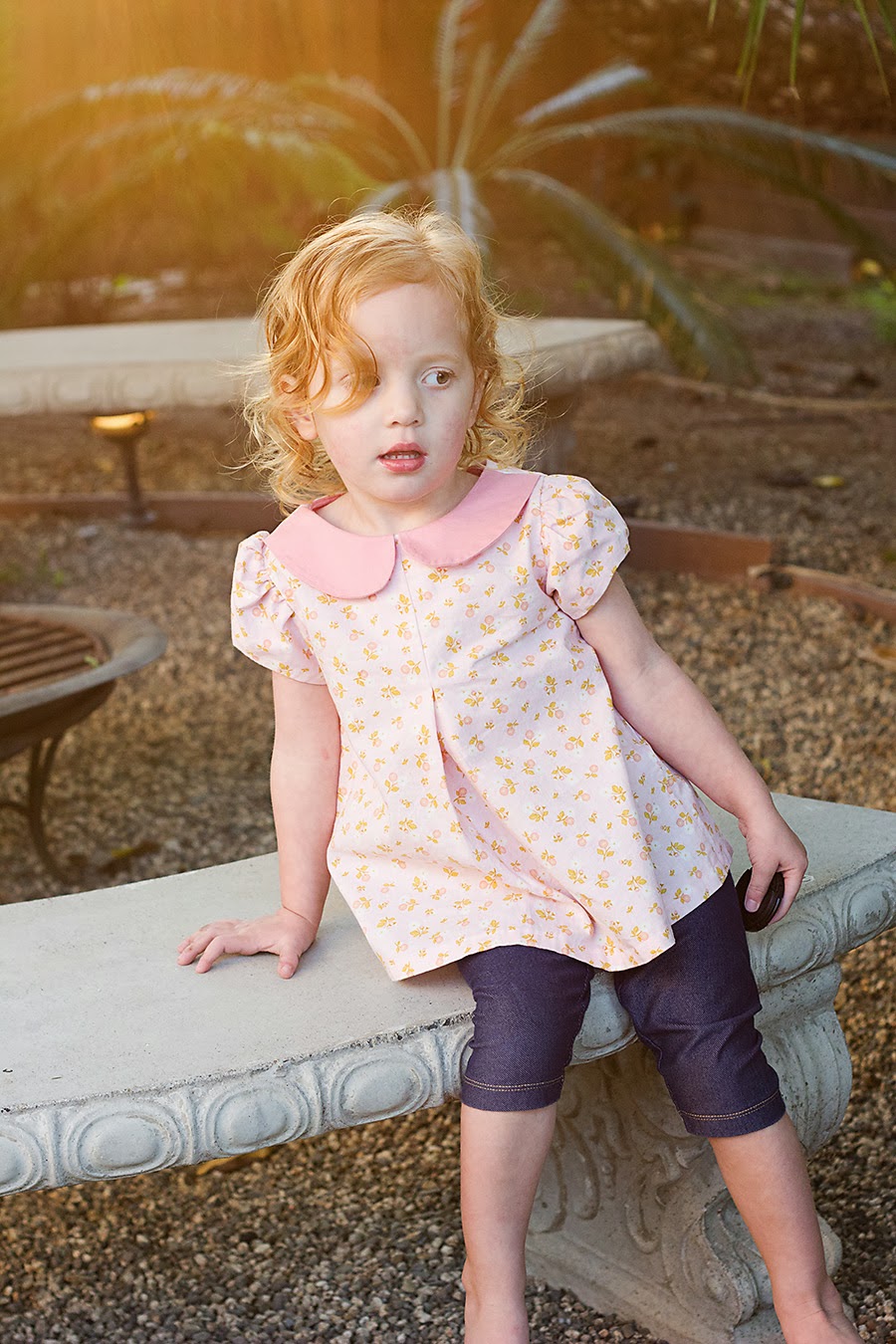 She loves having her picture taken in new clothes though.  A few days ago I bought her a new RTW shirt and she insisted on me taking a picture of her wearing it for the first time, silly girl. 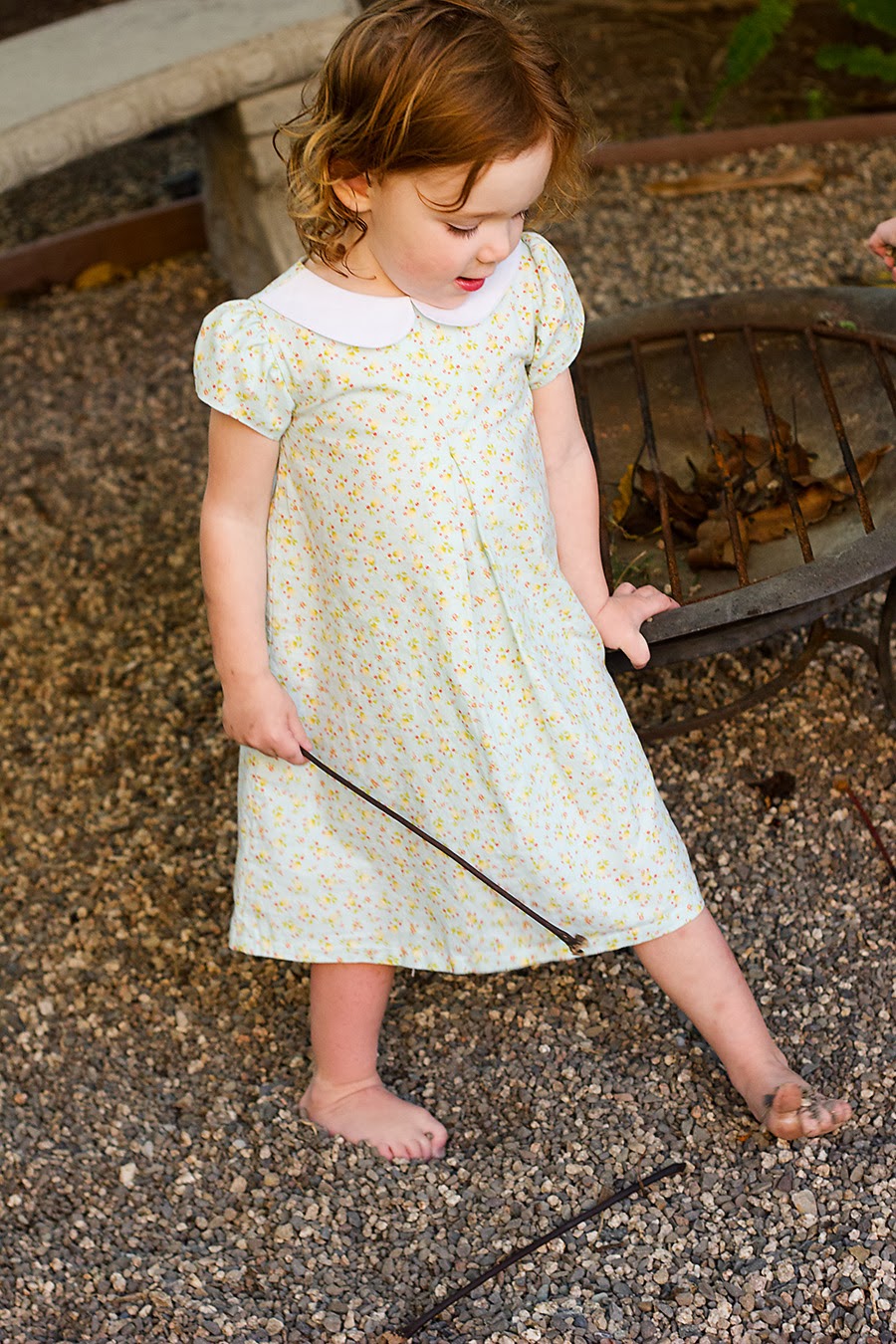 I eventually gave up and moved on though.  No matter how hard I tried I wasn't going to get a good shot of them together.

So, on to the details of the pattern: 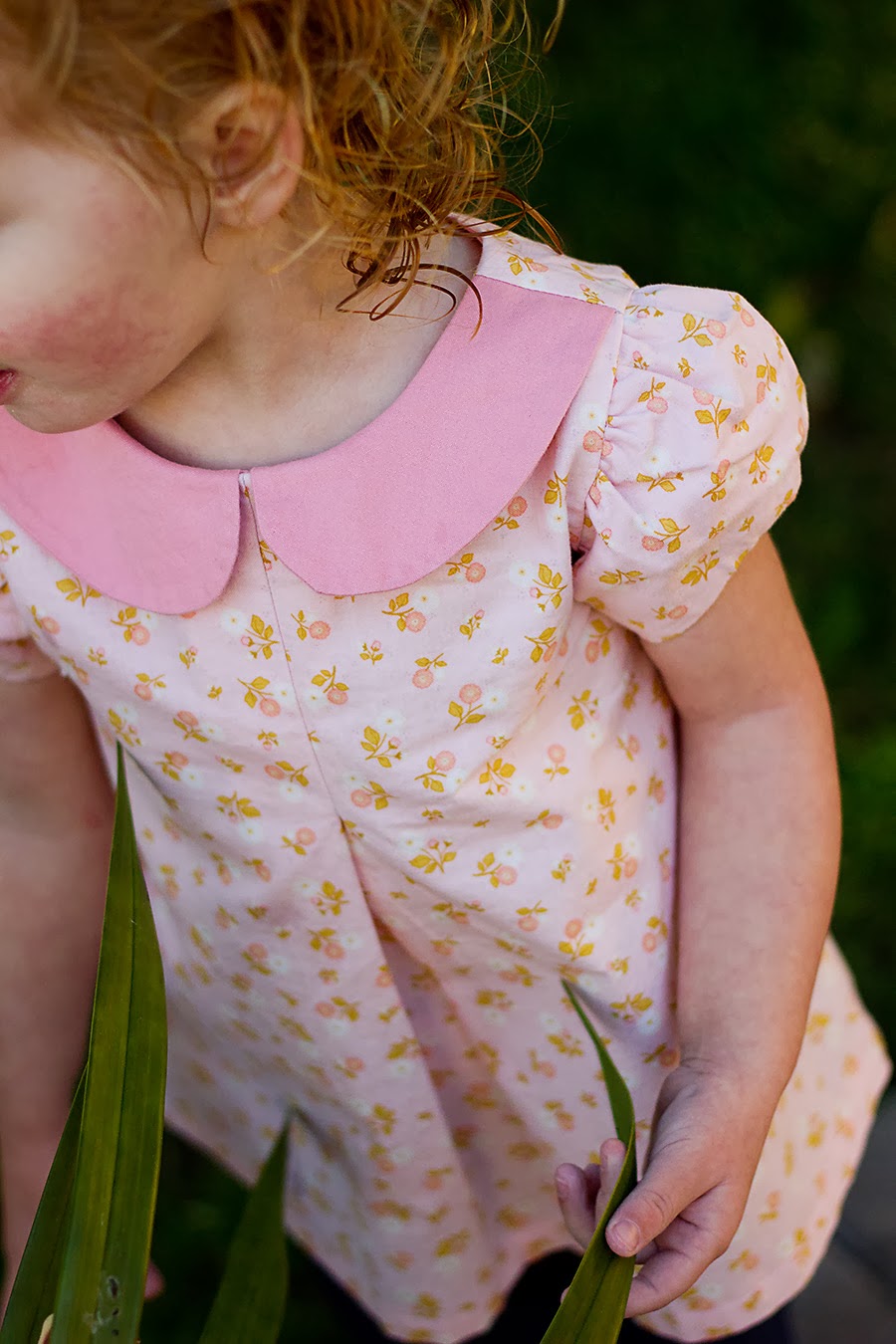 There are actually two collar options (even though I only chose one), a peter pan and a rolled collar.  The rolled collar is super cute to though, make sure to check it out! 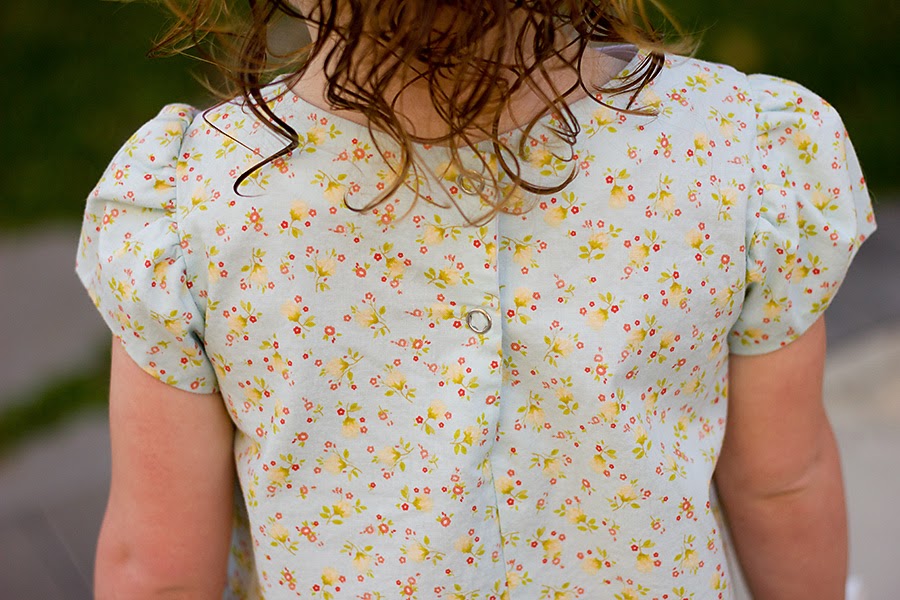 Oh how I love snaps, especially at this age. 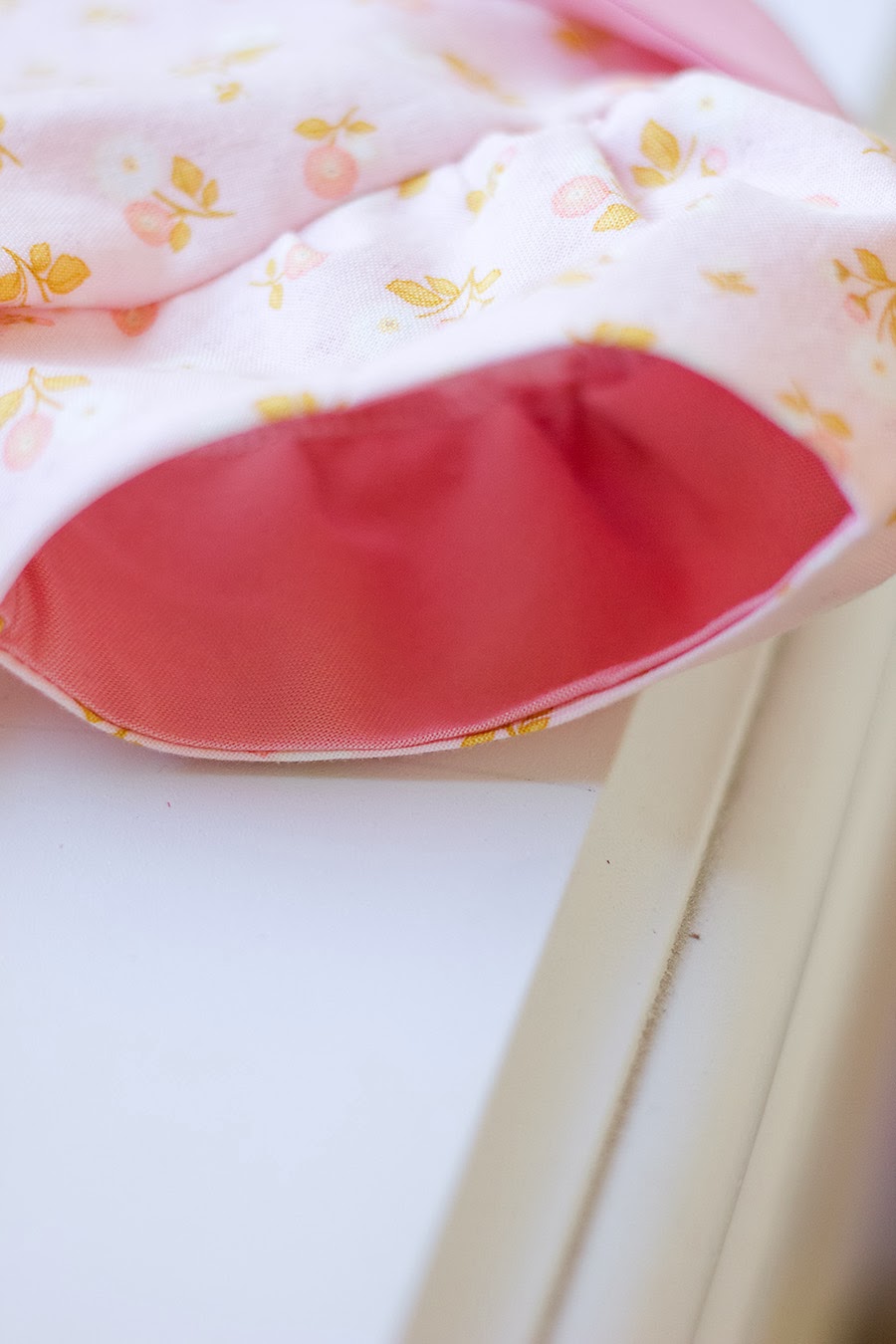 The sleeve is really neat, it is fully lined.  I love the look it gives, and the satisfaction I got from learning a new technique.   It is also gathered a little, which gives it a nice shape. 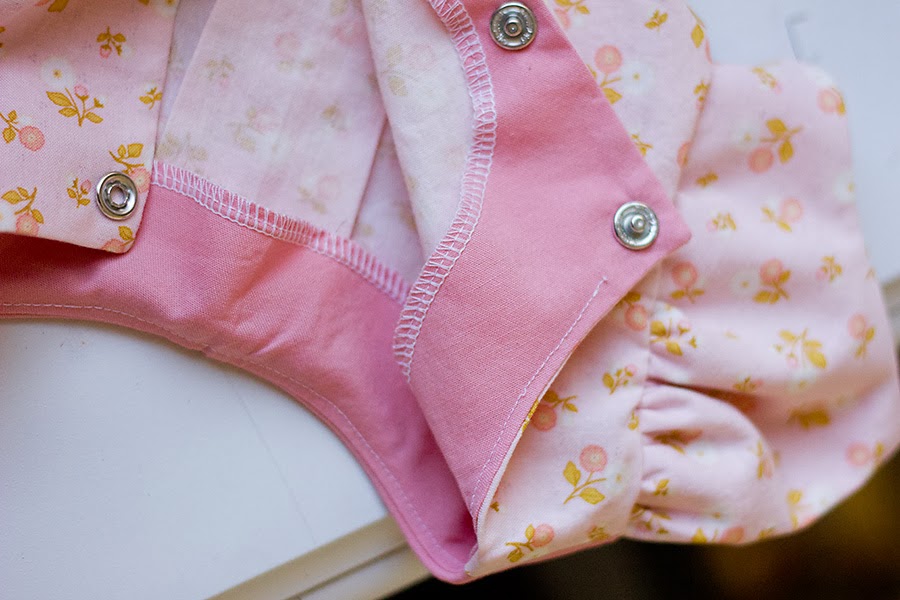 There is also a front and partial back facing and understitching.  Oh how I love understitching, it is so nice that it keeps the facing in place.

To be honest, the peter pan collar and the box pleat sold me on the pattern, but I love all the extra little details.  I definitely want to try the other collar option soon.  The girls love them and have already staked their claim to their favorite (the ones they are wearing in the pictures).


The pattern will be out soon, and I will update when it is in her shop.  It is now available! Check it out here, the introductory price is $5- totally worth it IMO!  Also, if you spend over $6 in her shop, Cecilia has kindly offered 20% off your entire purchase using the code sewing4four, so go crazy! ;)  P.S. that code is good from now until March 26th!
Posted by brittney at 12:00 PM 9 comments:

Email ThisBlogThis!Share to TwitterShare to FacebookShare to Pinterest
Labels: for the twins, Lily bird studio

For my fourth and final set this go-around, she chose pirate themed.  (first, second, third). 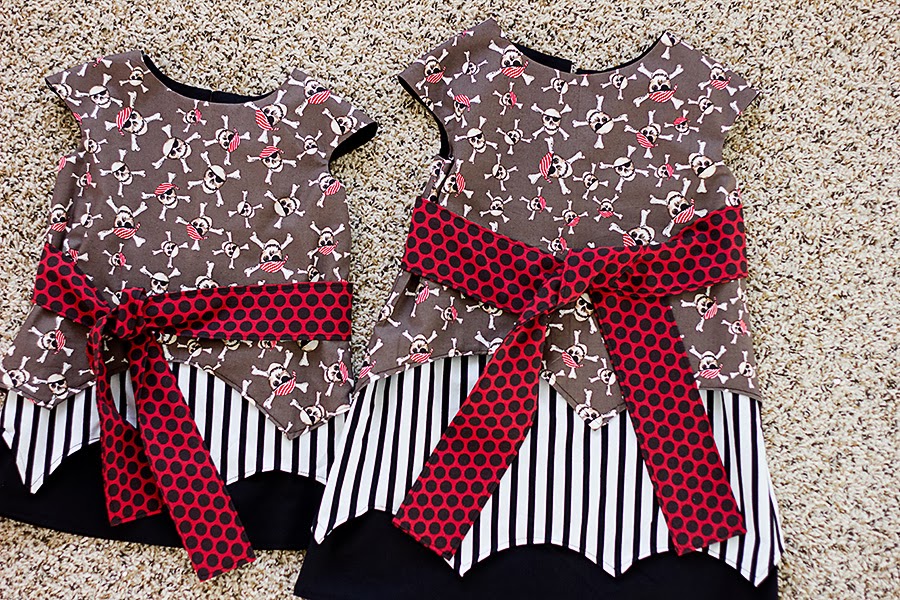 The inspiration for these dresses were found here. 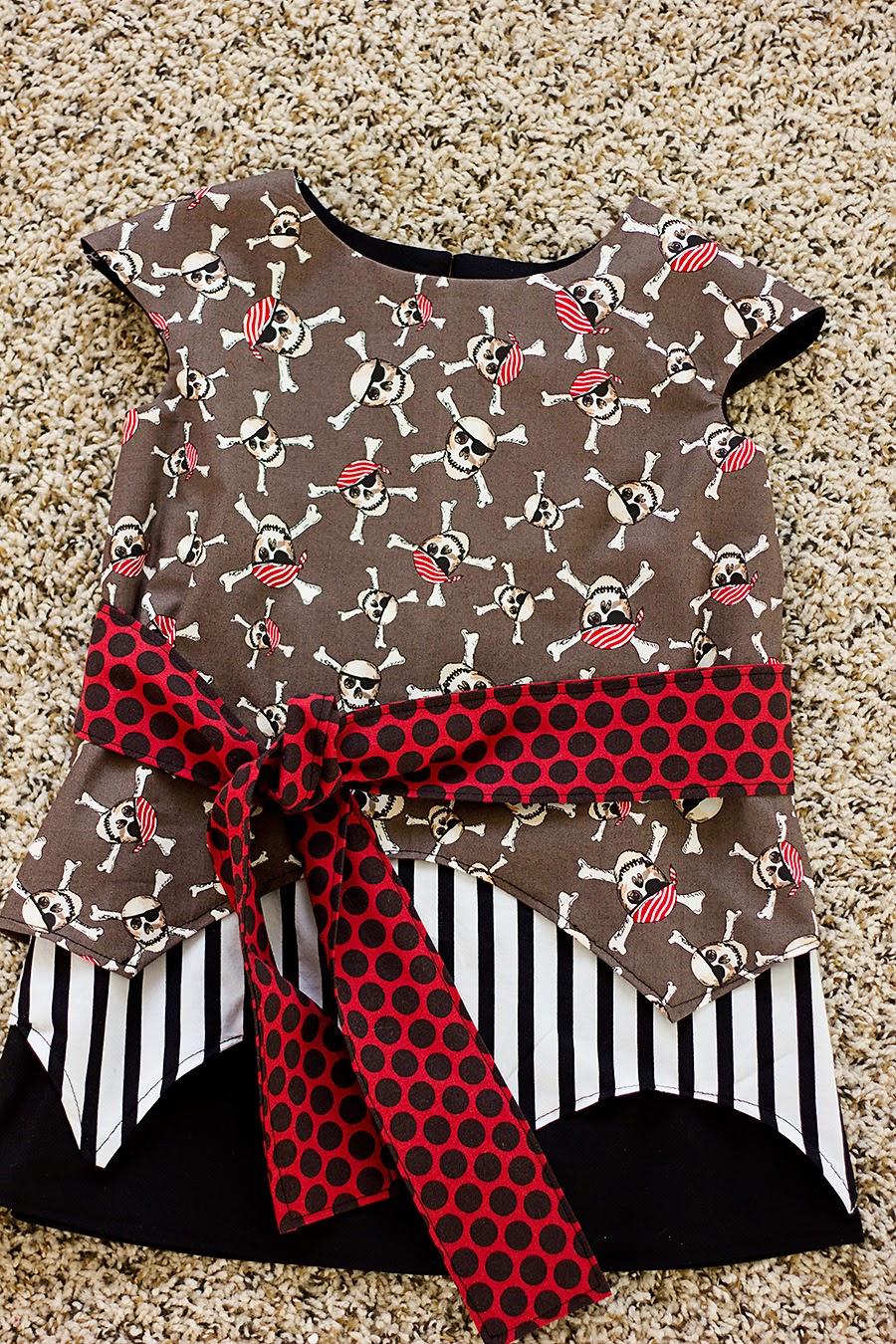 I used the Oliver + S Roller skate dress, modified, of course.  Also, in a size 4 and a size 12m.  I constructed it slightly different as I didn't want the raw edges shown on the black layer (aka lining layer). 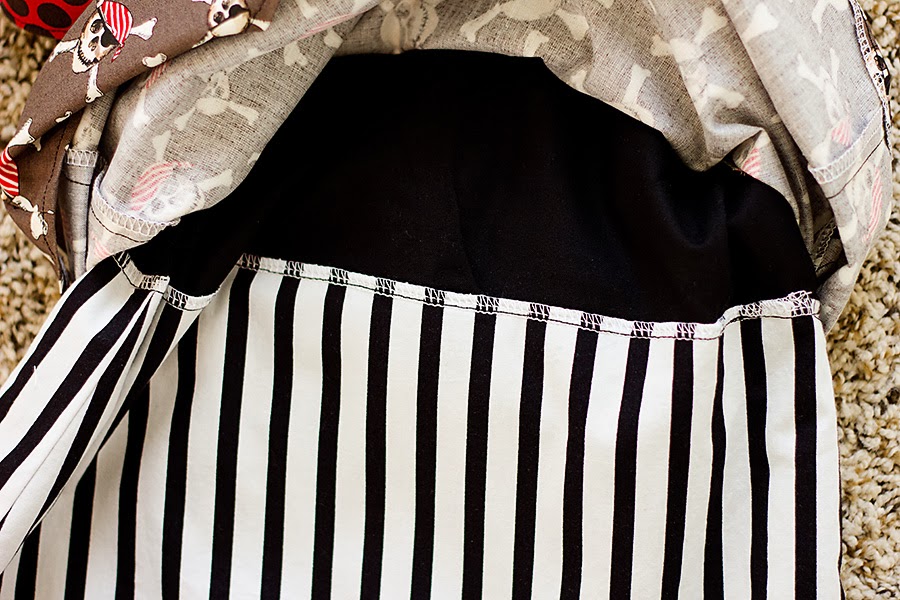 I used the pirate as the "main" layer, black as the "lining" and attached the striped fabric to the black.

I think they turned out pretty well, and similar to the inspiration dress, my friend seemed to like them too.  Can't wait to see pictures from her vacay and live vicariously through her, haha!
Posted by brittney at 7:06 PM 5 comments:

Email ThisBlogThis!Share to TwitterShare to FacebookShare to Pinterest
Labels: Disney, for others, Oliver + S, Roller skate

Continuing on with the Disney themed outfits (first here, second here) next up are matching appliqued shirts and super twirly skirts. 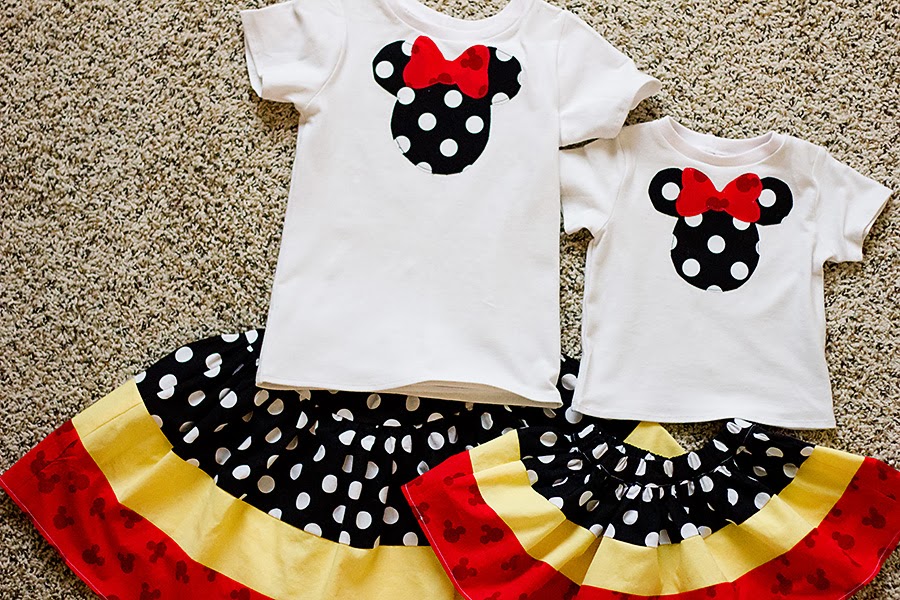 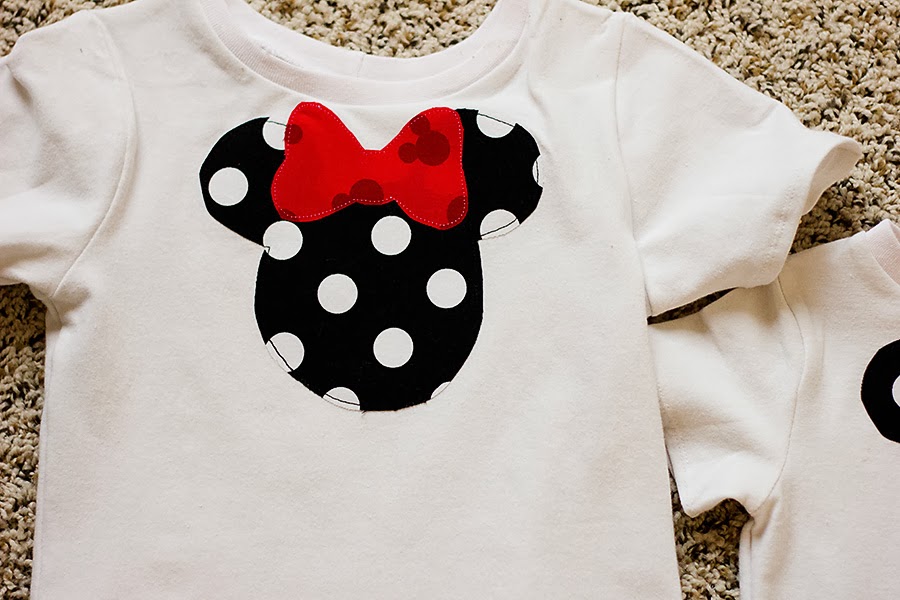 I used the super fast Flashback Skinny Tee for the shirts, sizes 5T and 12m.  I for reals love this pattern, like, so much.  Pretty sure it's my most used pattern.  So I have said all I really need to say about it before, but it is a super fantastic fit and a seriously quick sew. 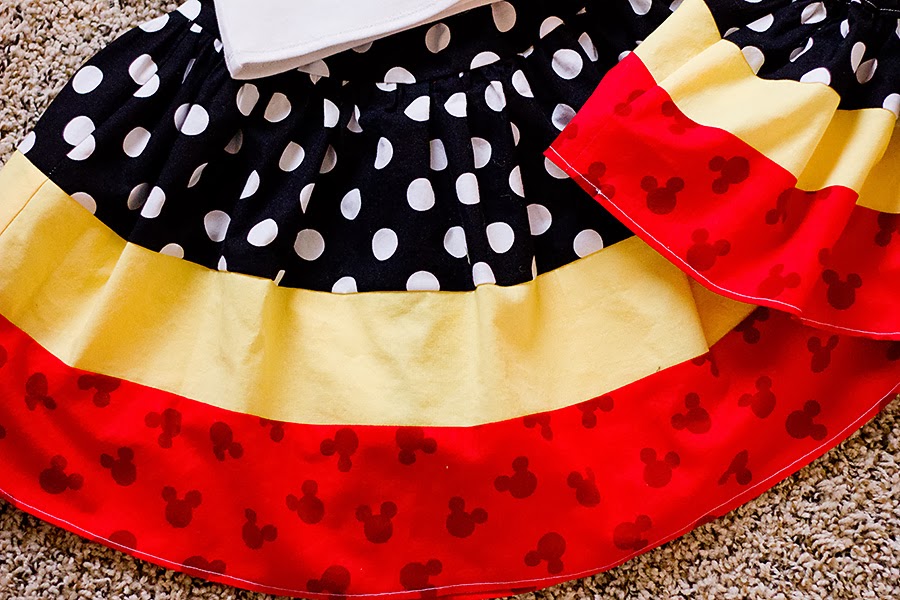 One final installment for this adventure: Pirate themed.
Posted by brittney at 5:00 PM 2 comments: