Sigh, still way behind on blogging, worried  I may forget my sizing and notes, but family time comes first.  So, rather than go back and figure out what needs to be journaled, I will start with my most recent make, only a few days old and a few quick snaps yesterday. 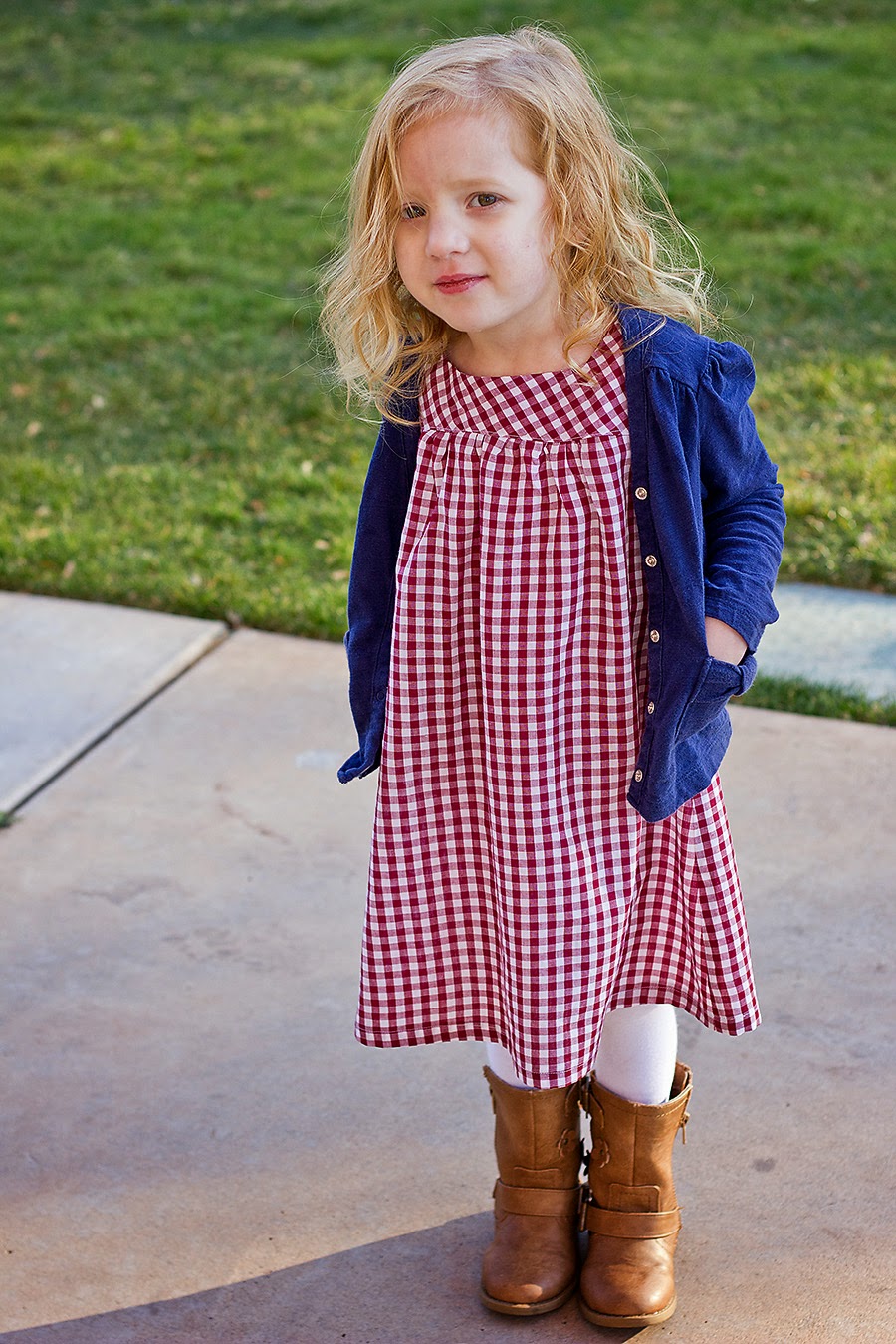 Every year we do family pictures with Ben's family (Sam wore this, this for Iz, and an unblogged hopscotch dress for George), but my family hasn't had them since I was in middle school.  But, we were all together for Christmas so we decided it was finally time.  Because of work schedules we had to take them in the morning and work to find a shady spot, and it turned reaaally cold this week all of  a sudden.  So the kids *looked* cold, hands in pockets and tense poses, but it will do for now.

My mom wanted navy blue and maroon, turns out we didn't have any maroon in our closets, so Georgie got a new dress.

I used Happy Homemade Sew Chic Kids, pattern b: dress with square neckline size 2.  I recently picked the book up, I couldn't pass it up as at the time I was able to get it for under $10.

I was still a little intimidated, even though it is the English version. 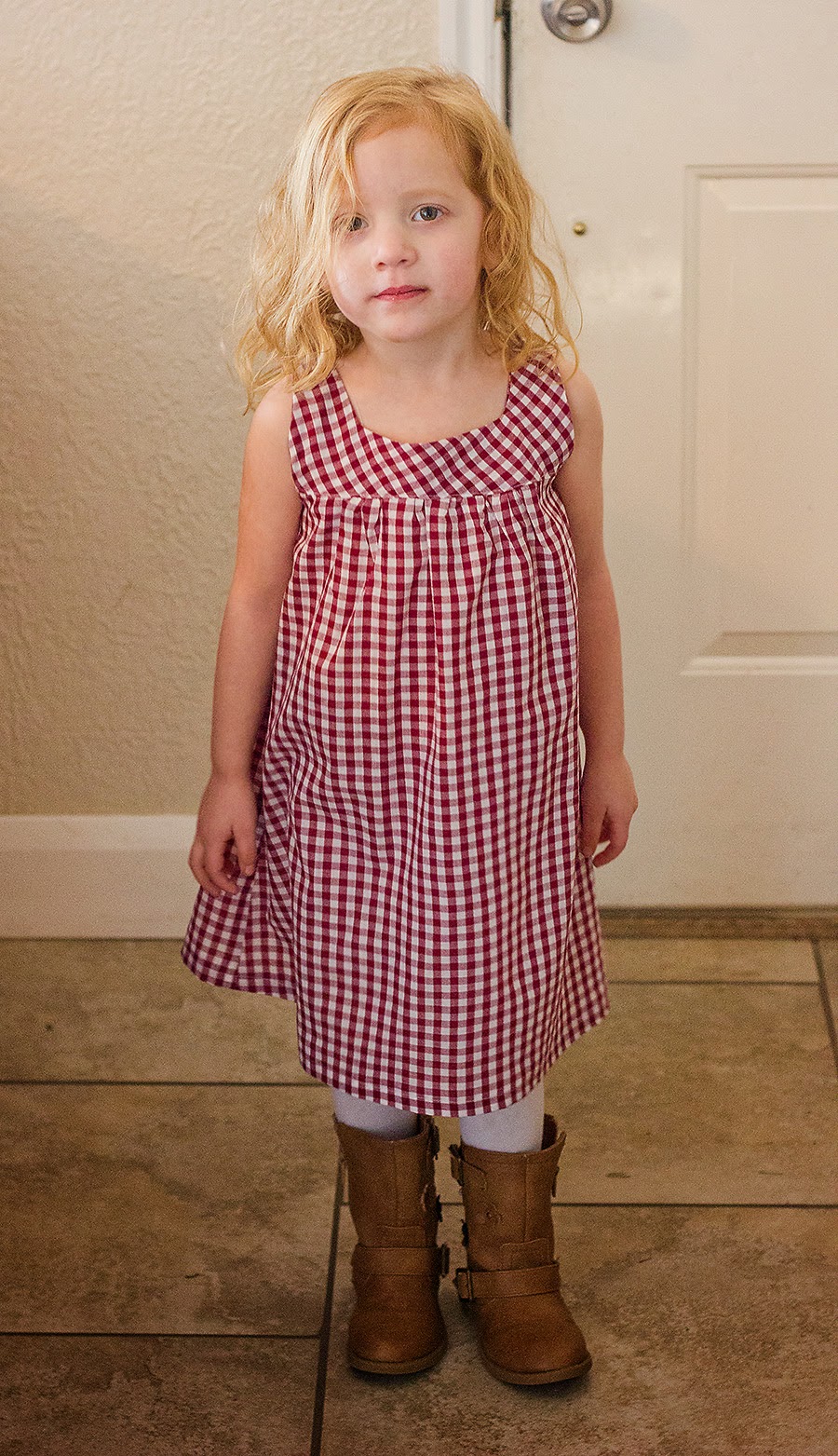 I did manage to figure it out, though, a little bit from the diagram and a bit from common sense and what I knew from other similar patterns.  It is her new 'most favorite' dress and I can see these being a nice staple in the summer.  She has actually worn it this way, with no cardi needed during the day, aside from that cold snap.  It's a crazy winter!
Posted by brittney at 10:33 PM 5 comments:

The one that fulfilled a promise.

I cut out the front and back of this tunic earlier in the month and meant to find a tutorial to help me figure out how to cut the sleeves so the pattern matched the body, so I set it aside.  Being I measured Abby and cut it in front of her, she knew I was making it.  She kept asking, and asking and asking when I would be finished with it, I kept putting her off.  Last Saturday (or maybe it was the Saturday before that?! I can't remember) we were trying to get her to practice her bike with gears.  She, for some unknown reason, is terrified of it.  I told her 'ride the bike, I'll finish the tunic'.  Well, that didn't happen, she rode but I didn't finish.  Last night we were talking and she said 'you never keep your promises to me!' and brought up the tunic.  Stabbed the knife right in.  Maybe I shouldn't have because she was being a bit of a brat, but I stayed up late and finished this up so she would have it for school the next morning. 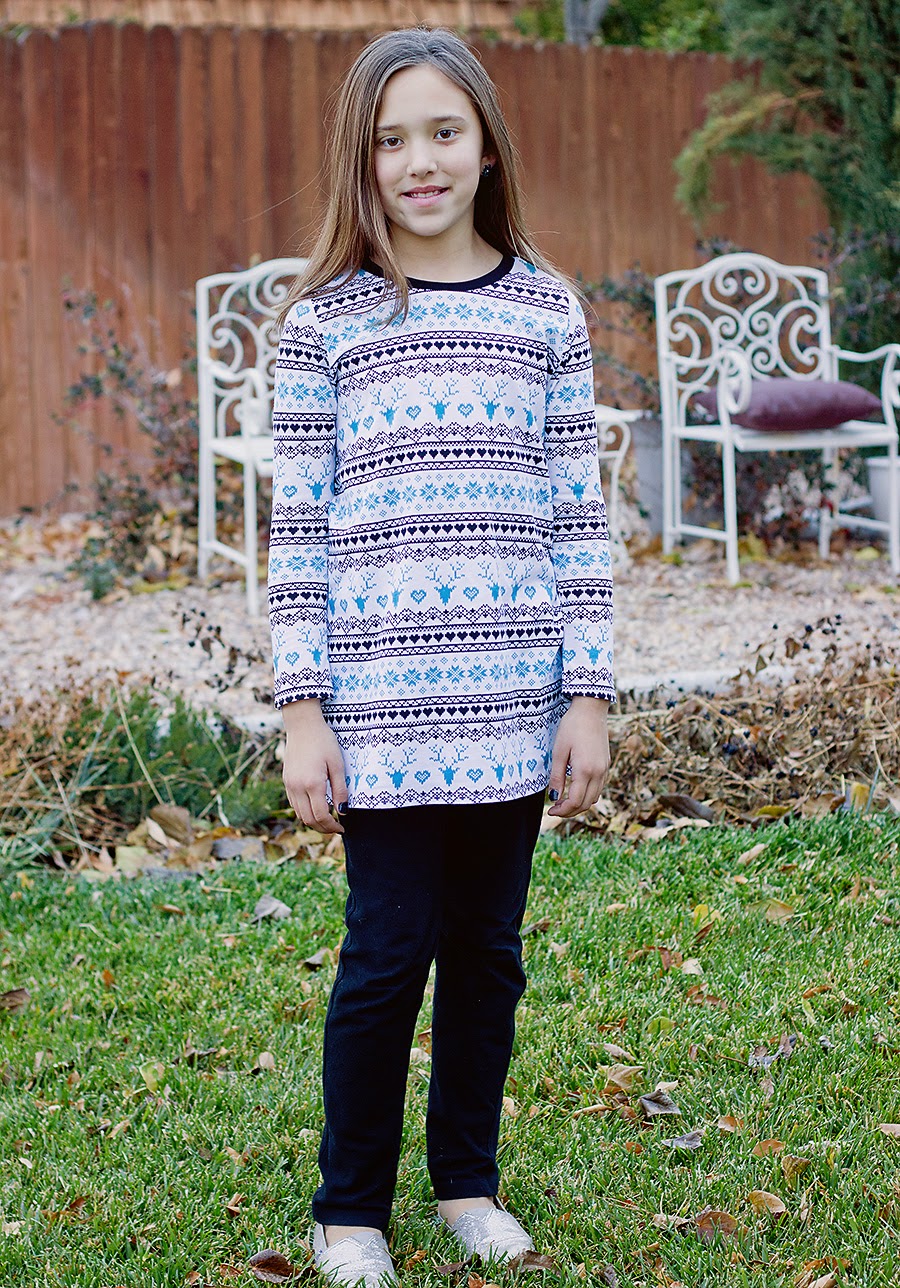 And she is very happy this morning, she even painted her nails and changed her earrings to match.

I used the Oliver + S School Bus Tee size 12, even though she measured in to the 10, I wanted it a little looser fitting as she is all about the comfort.  I lengthened the sleeves, but apparently not enough.  My kids must have really super long arms because I had the same problem with Jack's.

I would have made it a dress, but she isn't in to dresses at the moment, so I lengthened and turned it a-line the legit way with Liesl's tutorial. 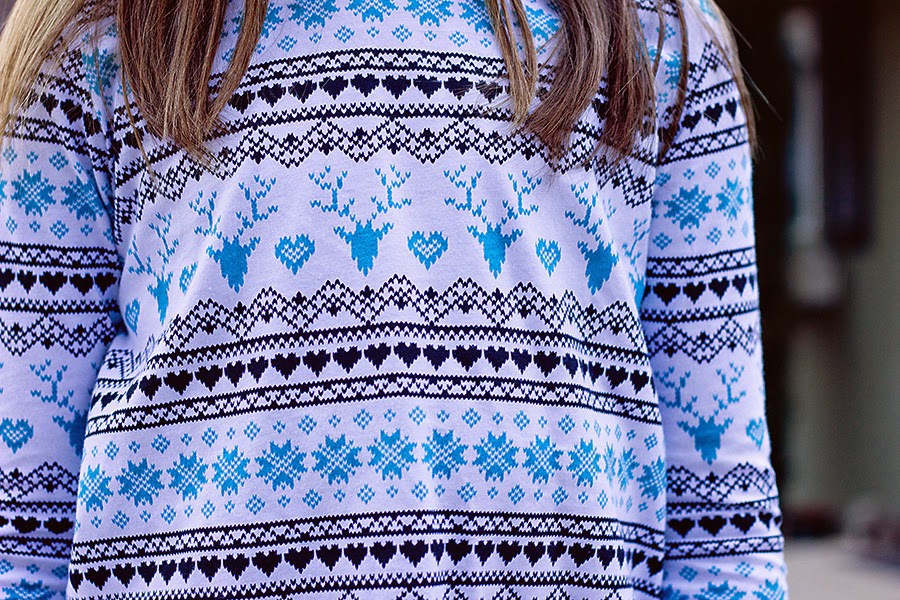 I cut front and back each in a single layer to make positive everything would line up, but I didn't ever even look for the tutorial for the sleeves, so I just winged it.  It doesn't look horrible, but I do love seeing other's nail it.  Someday I will figure it out. 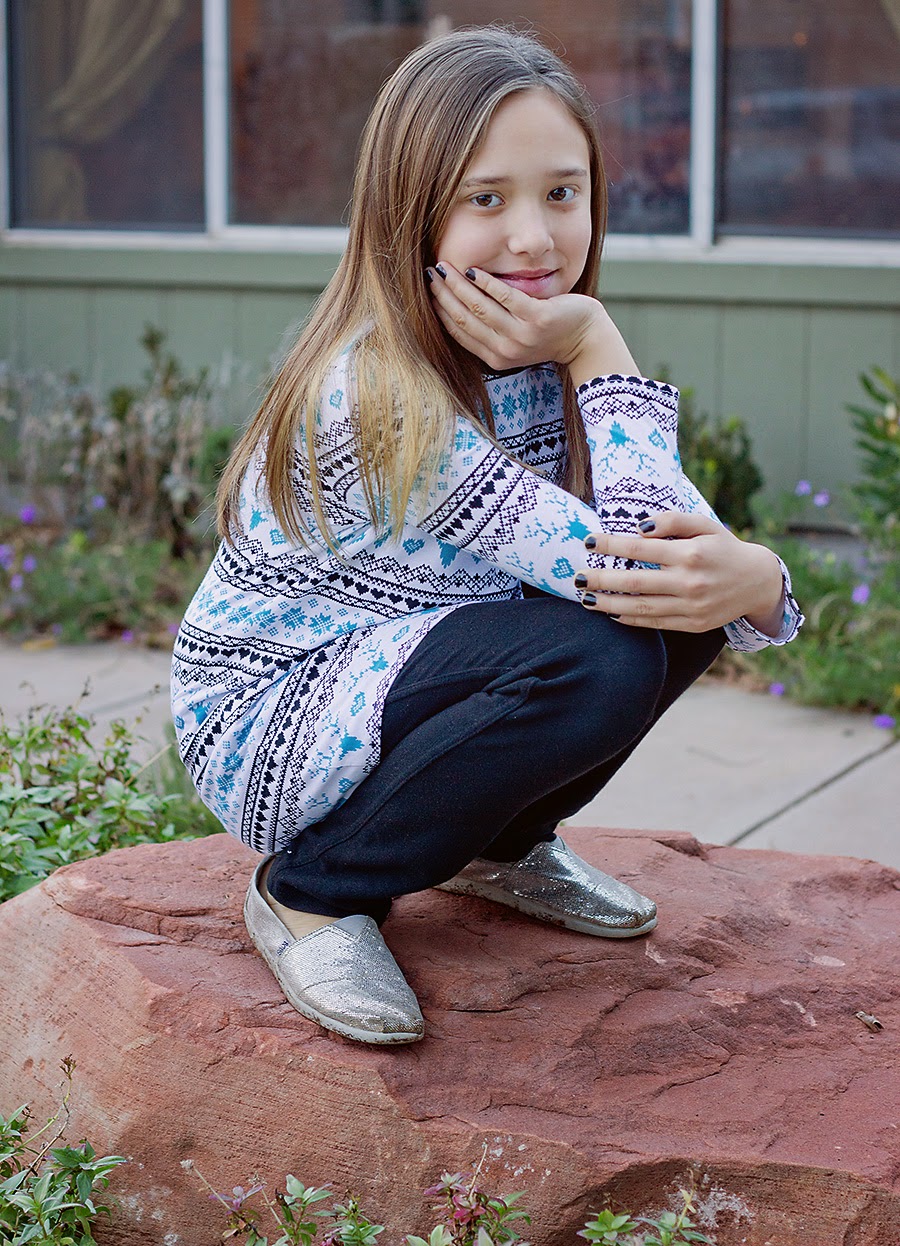 She requested this pose, on this rock.

I really should have finished it earlier in the month so she could get more wear out of it, but it will work for January too, right?  Right?... That's what I told her, anyway.
Posted by brittney at 9:38 AM 3 comments: 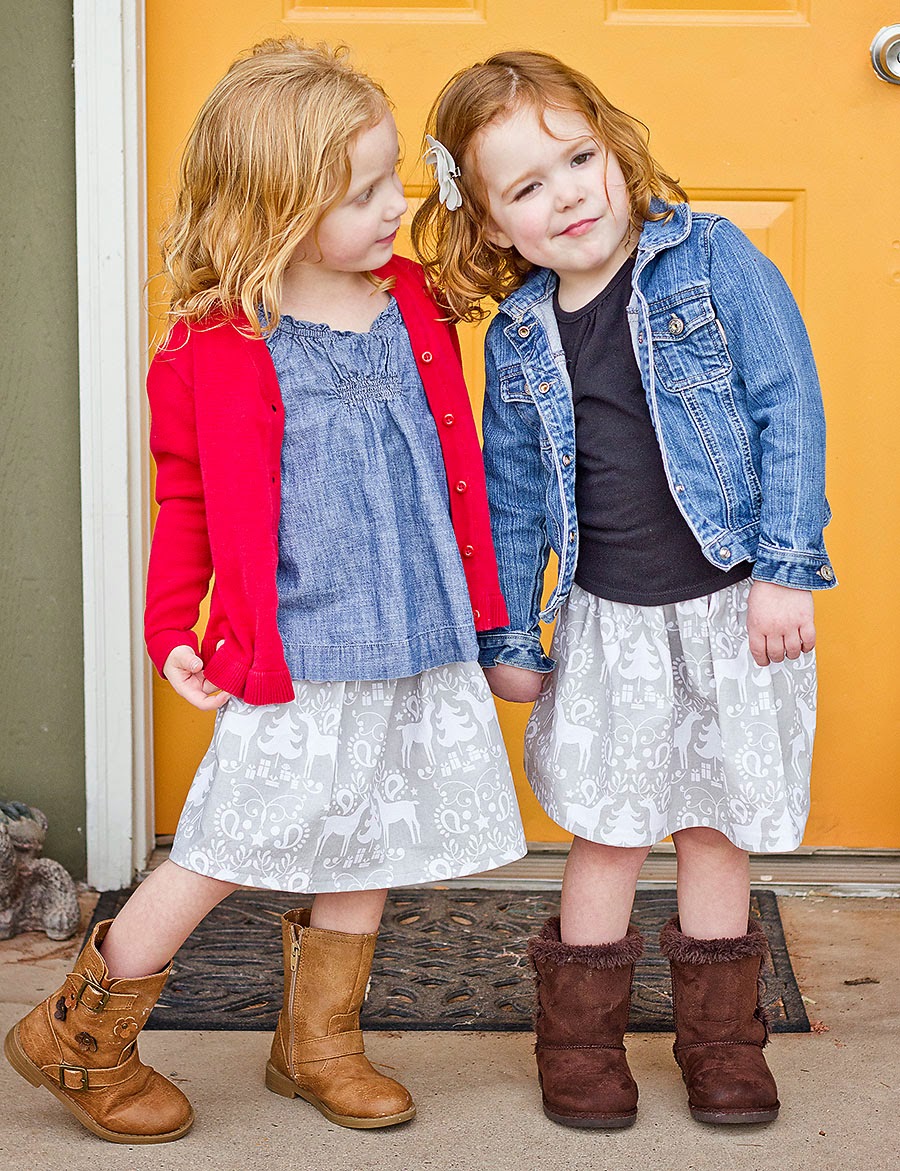 Oh, these two just crack me up.

I have been working on a few items for a friend and they have just been dying over the "Chwismas reindeews!".  Today when I hung the dresses (more on them in a minute) to snap a few shots of they just lost it when I said for the millionth time that the dresses weren't for them.  Since I managed to overestimate the amount of fabric I needed I ended up with enough to make them each a skirt.  While George wasn't thrilled it wasn't a dress, she loves her new skirt, and I love that these only took an hour.  Score. 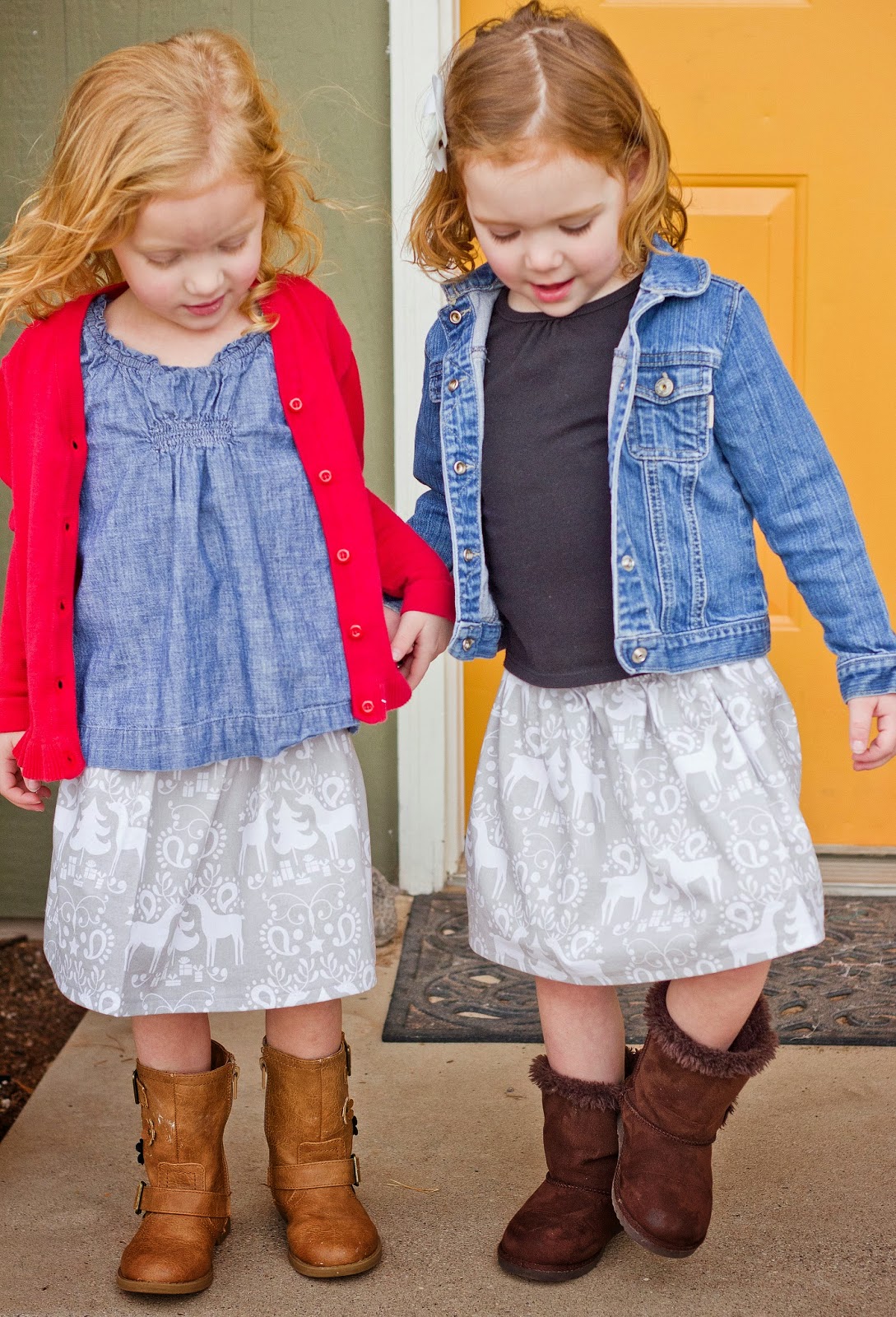 I wanted to do an accent color on the skirts, but I wanted to have them ready for a Christmas party tonight which meant having them match any random shirts that happened to be clean.  Elizabeth is making a fashion faux pas, or is she?  I have started seeing brown and black paired together lately.  But, she refuses to wear any other pair of shoes lately, so that's what she gets. 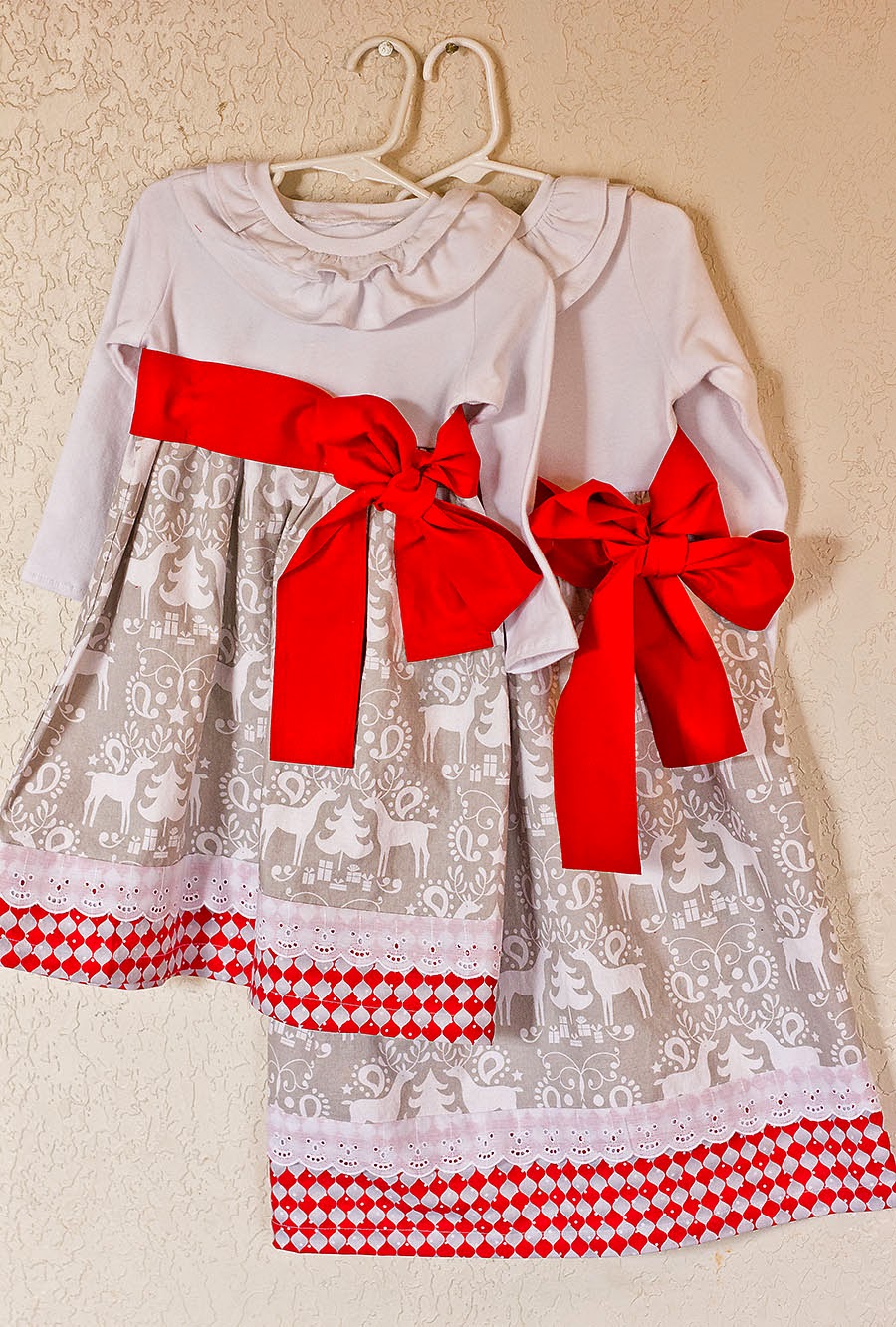 It was pretty cloudy today, so the colors are a little off, but the reds are a pretty 'true' primary red, not too dark or bright and they actually do match perfectly to each other.

I used the Oliver + S School Bus Tee as a base and added the neck ruffle and skirt based of a picture my friend picked out.  These are size 5 and 18 month. 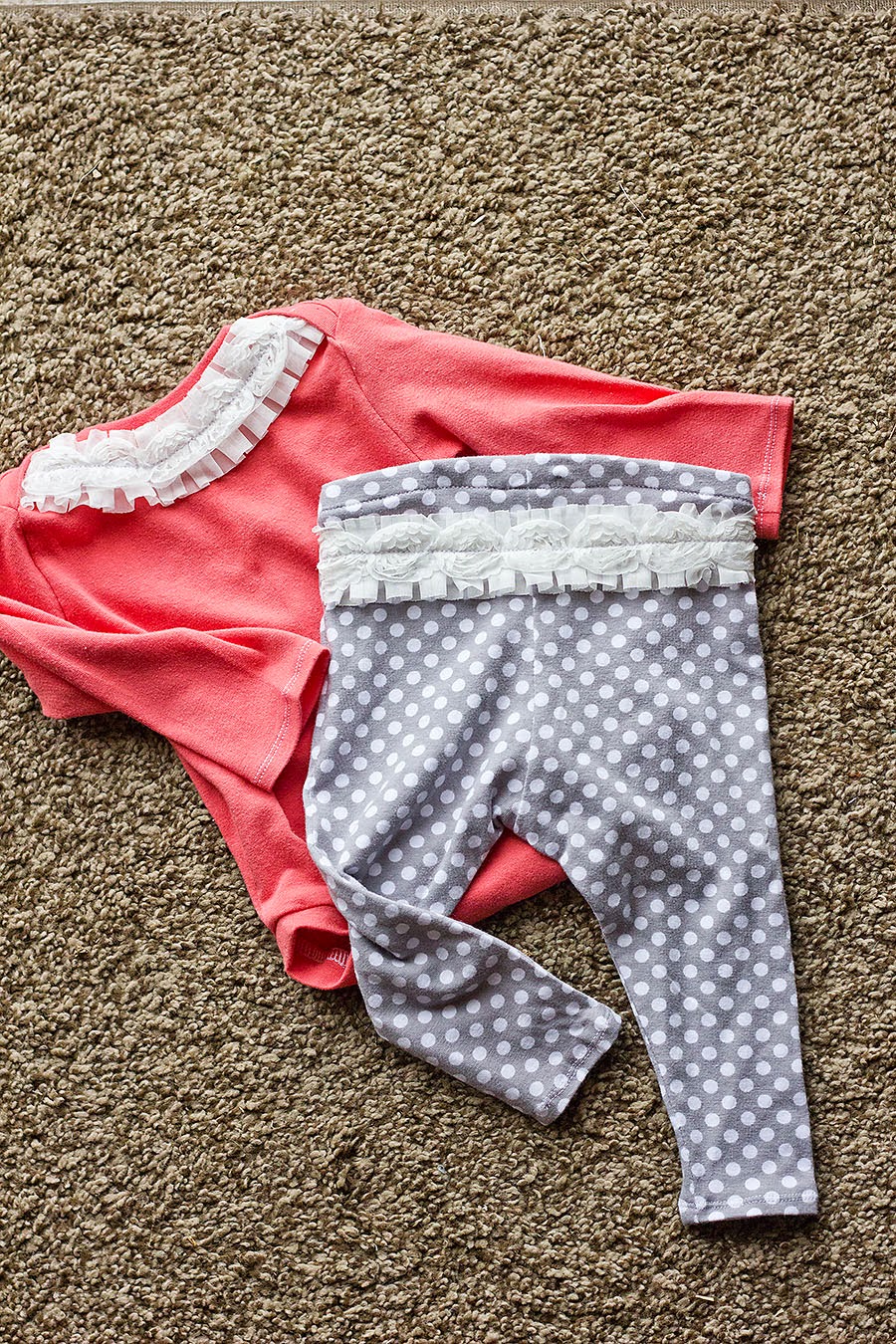 She also wanted a baby gift based on a picture she found.  I used the Lullaby line bodysuit from Peekaboo patterns and the baby go-to leggings, both 3 month.  I was (am) a little worried about the trim because there is absolutely no stretch so I made the head opening slightly bigger. 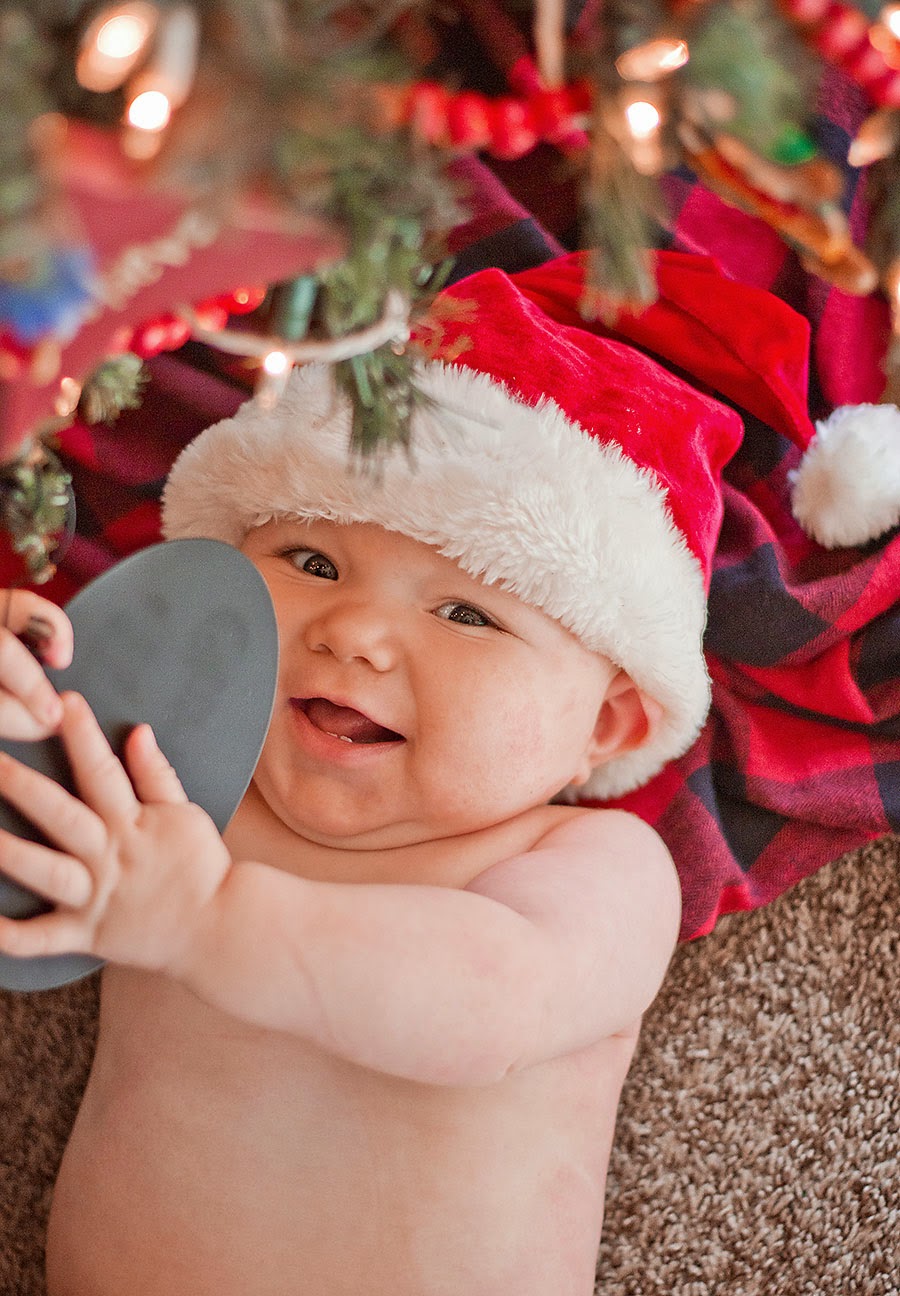 If those dresses and skirts didn't put you in the Christmas mood, I bet my utterly adorable baby will, ha!  Time for a million (or so it seems) Christmas parties!
Posted by brittney at 3:27 PM 5 comments: