It's all in the details.

It's all in the details, baby, as my friend Nicole always says. 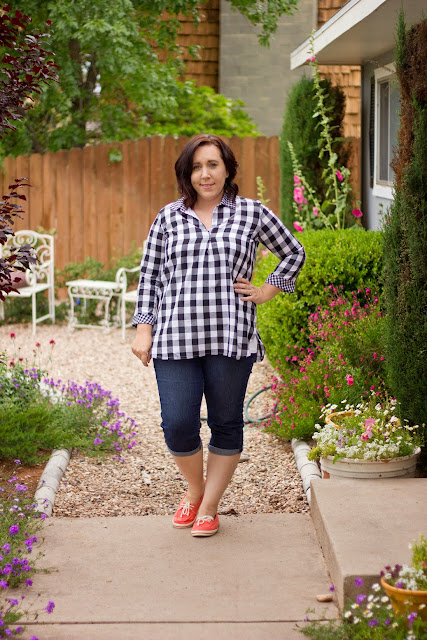 As soon as I finished my first Gallery Tunic I started plotting my next one.  I wanted to change a few things up to give it a little different look as it would be my third gingham shirt in my closet, one RTW and the other I made.

So I decided on a larger scale for the body with a smaller gingham and a polka dot thrown in the mix.

Abby is getting better with the camera, though I am still nervous she will drop it- hence the awkward face, I was trying to give her instructions. 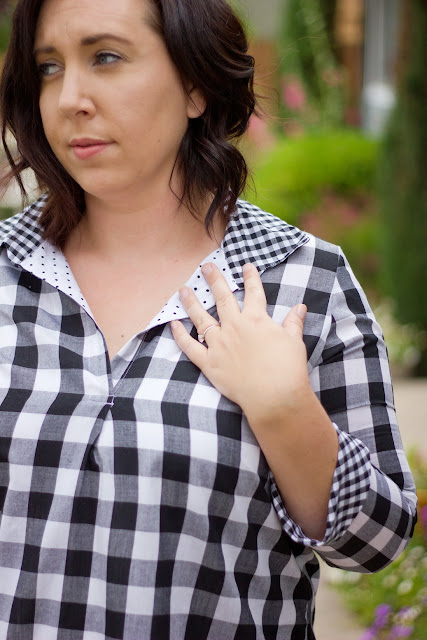 At first I wanted to go small gingham collar with polka dot cuffs, but on flickr Masha suggested the collar and cuffs be the same.  I liked that idea better and knowing the placket is more of a hidden or less noticeable detail, I used the polka dot there. 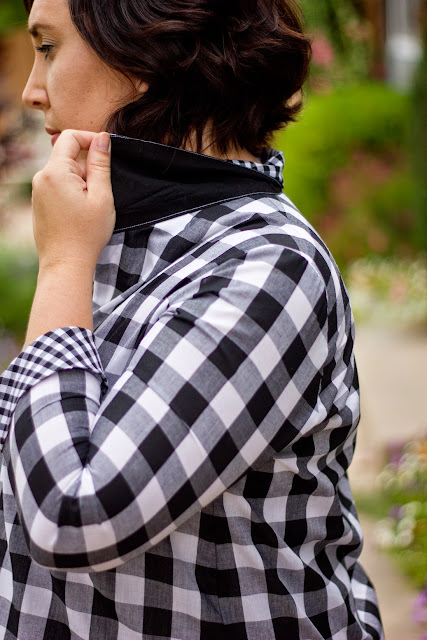 I used a solid black for the under collar, another hidden detail, but I like knowing it's there.
Posted by brittney at 6:02 PM 7 comments:

Email ThisBlogThis!Share to TwitterShare to FacebookShare to Pinterest
Labels: for me, Gallery Tunic + Dress, Liesl and co

This little guy could use some more bottoms and I have a few prints in my stash waiting for the perfect pattern.  I wanted something sort of baggy with cuffs, I wasn't too particular other than that. I found myself on pinterest and etsy this morning when it hit me, Ottobre.  I have had a subscription for a while now, but it's more eye candy than anything to me.  I really need to use them more often.  So I went through my stack and found something to experiment with before I cut in to my 'good' fabric. 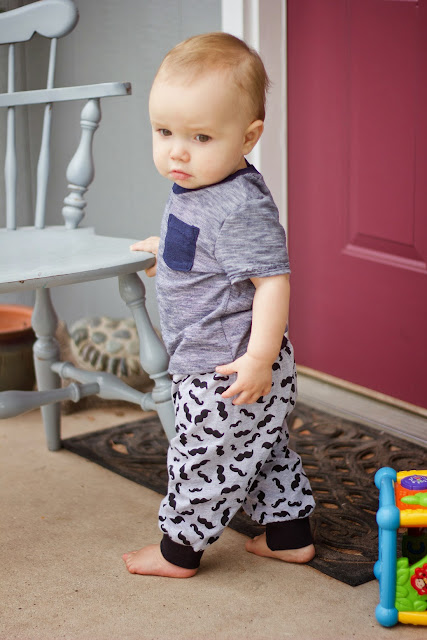 I had literally just enough of this fabric to cut out the 80cm size.  I have used it in the past for Jack and he loves it, he was sad when he outgrew the tee and hoodie. 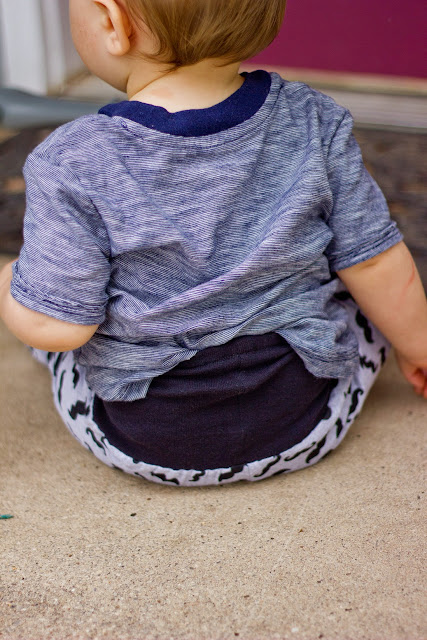 The only thing I didn't love was how high the waistband goes up, but it doesn't but me enough to figure out how to modify it. 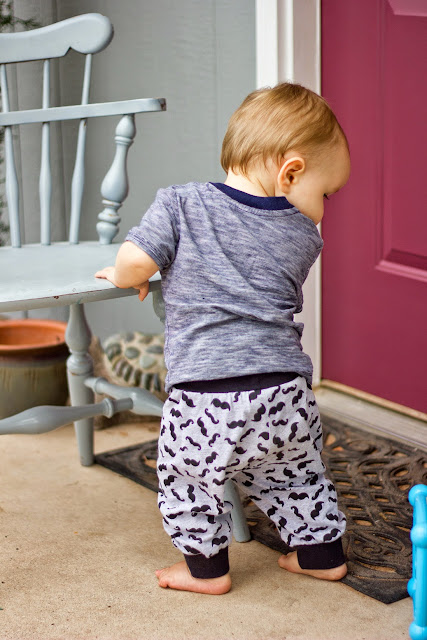 They are a harem style, and while I never actually thought I would make my kids this style, I don't hate it.  In fact I kind of love them on him. 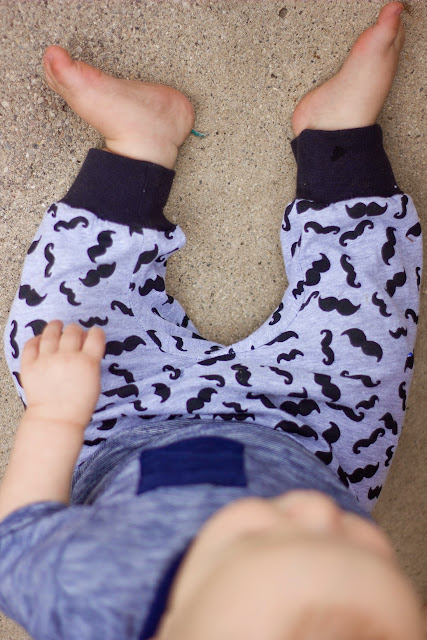 The pant piece is only one piece of fabric, cut on the fold and sewn together in the back and inseam.  It took me a minute while looking at the pattern piece and instructions to wrap my head around how it would work out, but once I cut the fabric it was obvious and quite genius.

I constructed the pants and wasitband as instructed, but just folded the cuffs in half rather than add elastic to them too.
Posted by brittney at 2:06 PM 4 comments:

Email ThisBlogThis!Share to TwitterShare to FacebookShare to Pinterest
Labels: for Sam, Ottobre

As soon as Liesl showed the preview of her new Gallery Tunic + Dress I knew I need it in my life- immediately.  I have a RTW shirt that is similar that I absolutely love and wear every time it is clean.  It is in a lightweight slightly textured navy gingham.  It's so comfy and easy to wear, though I am sure soon enough it will be too warm around these parts for it.  Which is also why I wanted to get on this one asap, get as much wear out of it before it turns hot- like in a week or two, ha! 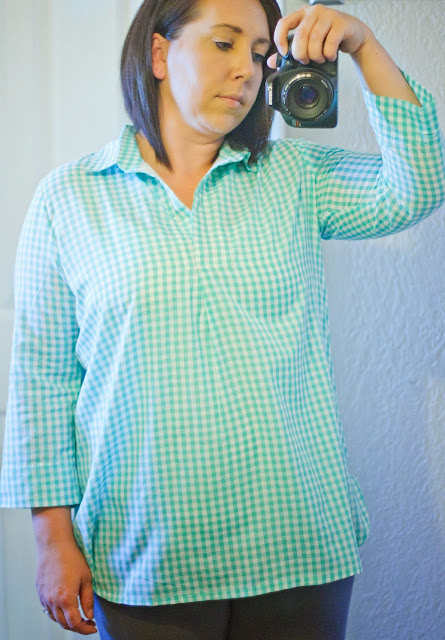 Our local fabric shop (which hilariously is also a hardware store)  has all kinds of lightweight gingham.  The selection hardly ever changes, nor does the amount of fabric on the bolts, so I sometimes wonder if I am the only one who buys it.  They have different sizes of checks and colors and way back I bought up a large assortment, because you can't beat $4 a yard, I think it may have been on sale too.  I have used the red, yellow and black for the girls in the past, and this one was intended for Abby buuuut I stole it.

I was so excited when my patterns arrived yesterday (go paper!) I got to tracing this one immediately, then life happened so I set it aside until this morning during nap time.  I completely forgot to do the FBA!  Sadly not the first time it has happened to me, and I am sure not the last.  I used a 1/4" SA around the chest to give me a little more room.  It is definitely still wearable, I just know that next time I will be doing the FBA.  In fact, I should go alter my pattern piece now... 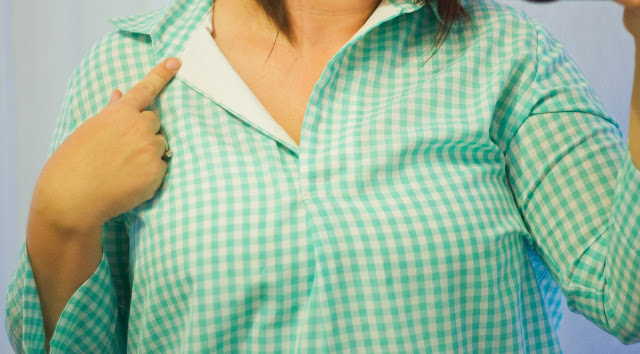 I chose to do a contrast placket, or maybe it was chosen for me as I didn't have a big enough piece left of the check.  I didn't actually look at my yardage, I just started cutting, hoping I had enough and knowing there was still plenty at the store if I ran way too short.  Ah, keeping it real here people.  I almost wish I would have done the collar white too, but maybe I wouldn't like it if I did... I am so indecisive, but since I only had enough white out of my fabric room (aka master bedroom, aka place the baby sleeps) for the placket I left it. 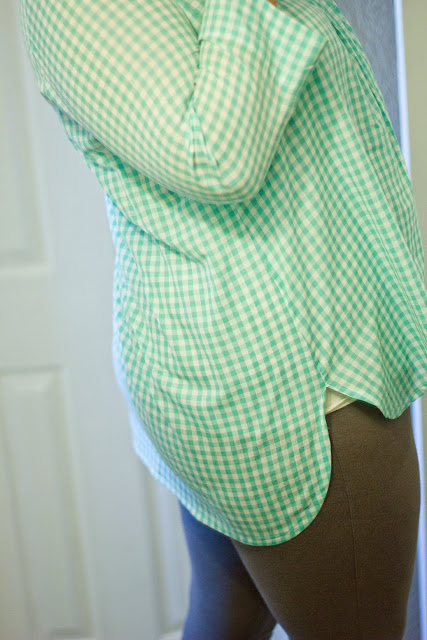 It turns out it is rather hard to take a picture of your own backside, the things I do for a pattern review, ha!  So, the front and back length aren't really this drastic, it is mostly the way I am standing, though the back is longer.  Long enough to cover your bum and maybe even get away with leggings, because leggings aren't pants (right my FTF friends?;) ).

So TL;DR, buy this pattern, it's awesome sauce.
Posted by brittney at 2:58 PM 11 comments:

Email ThisBlogThis!Share to TwitterShare to FacebookShare to Pinterest
Labels: for me, Gallery Tunic + Dress, Liesl and co

Recent makes for me.

I tend to get on kicks when sewing for a certain person.  No matter how hard I try to implement Nicole's rota system I just can't, and her sweet Hugo even made me a chart.  (I swear I will put it to use Hugo... someday).  So lately I have been sewing for myself. 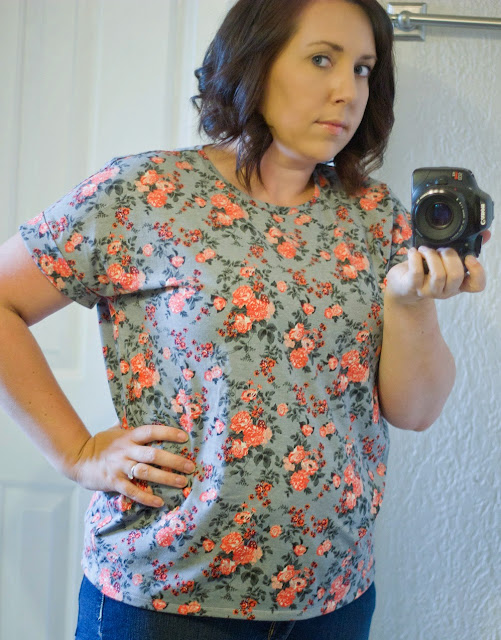 I made myself a few Bento Tees.  I have one more cut out and another one planned.  I added 3" to the length as I prefer my shirts longer.  This is a favorite and I have worn it quite a few times in the week it has been made.  This knit was initially ordered to make something for the twins, but once I made my first Bento (see below) I had to have this for me, no regrets.  I even eeked it out in less fabric than called for with some creative cutting. 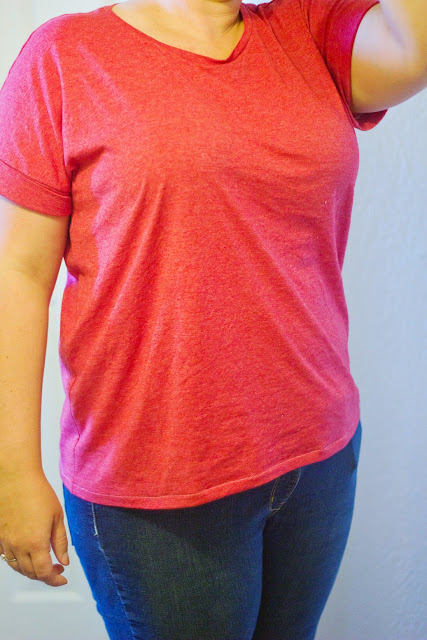 This was my test run Bento.  I found a heathered mystery knit at a local shop that I planned to use for a Parachute Polo for one of the boys, but I decided to give it a try for me.  I love it. 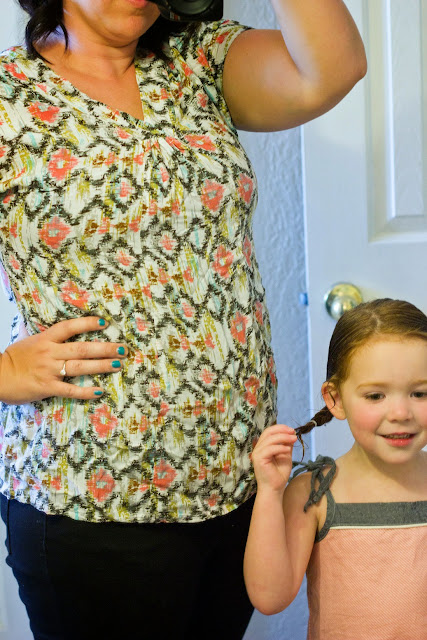 This Cappuccino Tunic was made during the sew-along, though I didn't get it photographed until much later so you'll just have to believe me.  I made it in a really drapey fabric I have no idea of the content, though I wish I had paid attention to the bolt because I love it.  I forgot the FBA on this one and it is a little tight across the chest, but I still wear it occasionally. 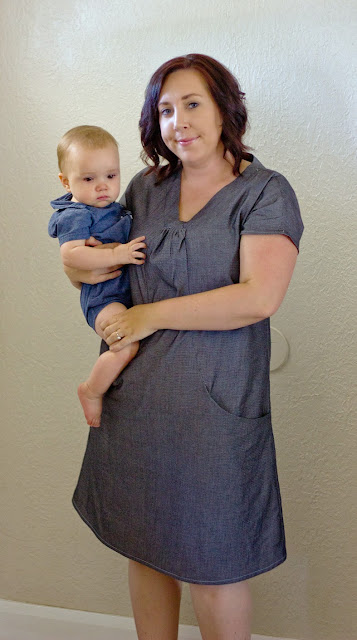 Last night I got this crazy idea I needed a new dress to wear to church for Mother's Day.  The worst part was I had been thinking about making it all day but was trying to talk myself out of it.  Then as I was putting the kids to bed I decided it had.to.be.made.  So I did.  I made most of it last night and finished up the side seams, hem and sleeve hem this morning (yay for one o'clock church).

Mr. Sam wasn't so happy today so he got to be in the picture too.

I was worried that I would need to lengthen the dress, but I had Ben help me with the tape measure last night and saw that the finished length would likely be alright for my preferences, which was a good thing because I couldn't figure out where to lengthen the pattern and I didn't want to take the time to read through all the instructions to figure it out (because of the time crunch). 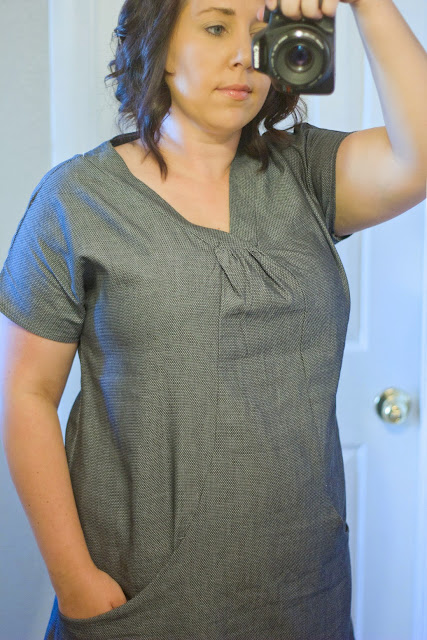 The very first thing Georgia said to me was "Pockets mommy!  You can take my Elsa Barbie to church for me in your pockets!"  I found that pretty hilarious.  This time I remembered the FBA.  I used this fabric and absolutely love it.  I was worried about how much it might wrinkle but decided to go ahead anyways and am glad I did.  It did wrinkle some as the day went on, but not enough for me to be super annoyed.

I can't remember the last time I wore a dress.  Well, I should say a knee length dress, I did have a maxi dress I wore during my pregnancy with Sam.

Aaaand I pretty much want another one of these, it's so comfy.  It doesn't work for nursing, though (obviously).  So it's either a home dress or a short time away from home dress.

I also made two muslins of Rae's new pattern that is coming out later this month and am dying to make a real one now.  It's so cute, and the short sleeve version (with no contrasts) is such a quick sew.  I also tried the view with 3/4 sleeves and contrast hem, sleeve and placket.  But since I literally made them in muslin I am not showing those photos off, ha!  So, sorry to the rota, but I think I may put it off a little while more...