I realized Jack has suddenly grown out of most of his shorts, time for new ones!

I had an epic fail with the Blank Slate Coastal Cargos, I made a size he measured in to and they wouldn't even pull up over his bum.  I was sad, he was sad.  Okay, I was more than sad, I was angry. I feel like my sewing time is precious lately as I am not always feeling well enough.  I needed a quick fix that I knew was going to work for me, and since I still wanted the look of the failed pants, I modified one of my trusty Oliver + S patterns. 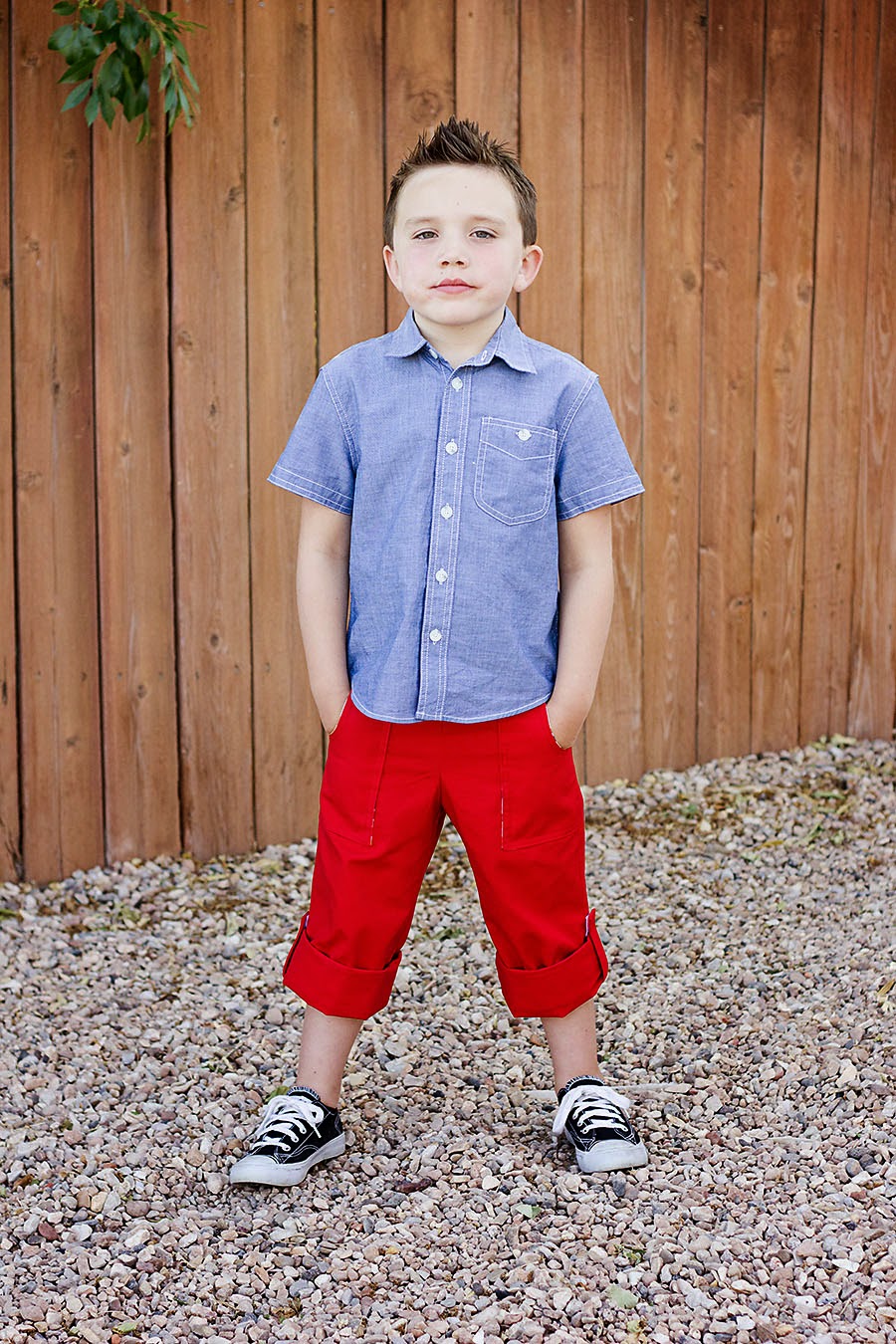 I decided to use the Sandbox pants pattern as I had made it before and Jack loved them.  Also, not only has he nearly outgrown his beloved red After School pants he tripped at kindy one day and tore a small hole in the knee, he was devastated, though he kept wearing them.  Funny being he didn't even want the dang things in the first place, ha! 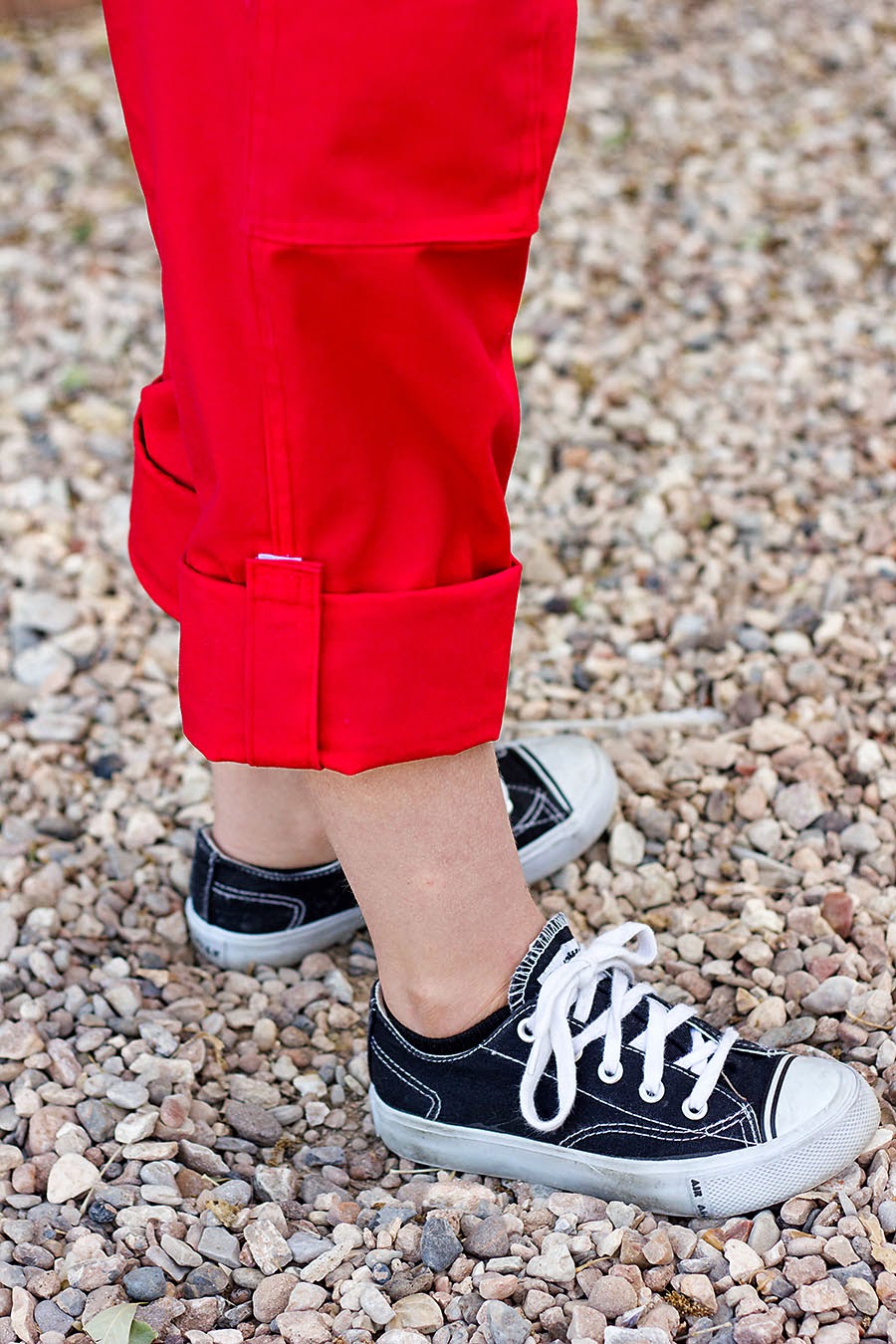 I flat felled the seams on the outside of the pant leg and the inseam so I could roll them up and not have any yucky serger seams showing.  The inseam nearly killed me, but I did it!

Then I made a tab and sewed velcro to it and the pant leg (the soft side of the velcro on the pant leg in case he wears them as pants so they don't catch on anything).

I rolled up the pant leg and kind of just winged it as to where to place the tab and velcro, but matched them on both sides obviously. 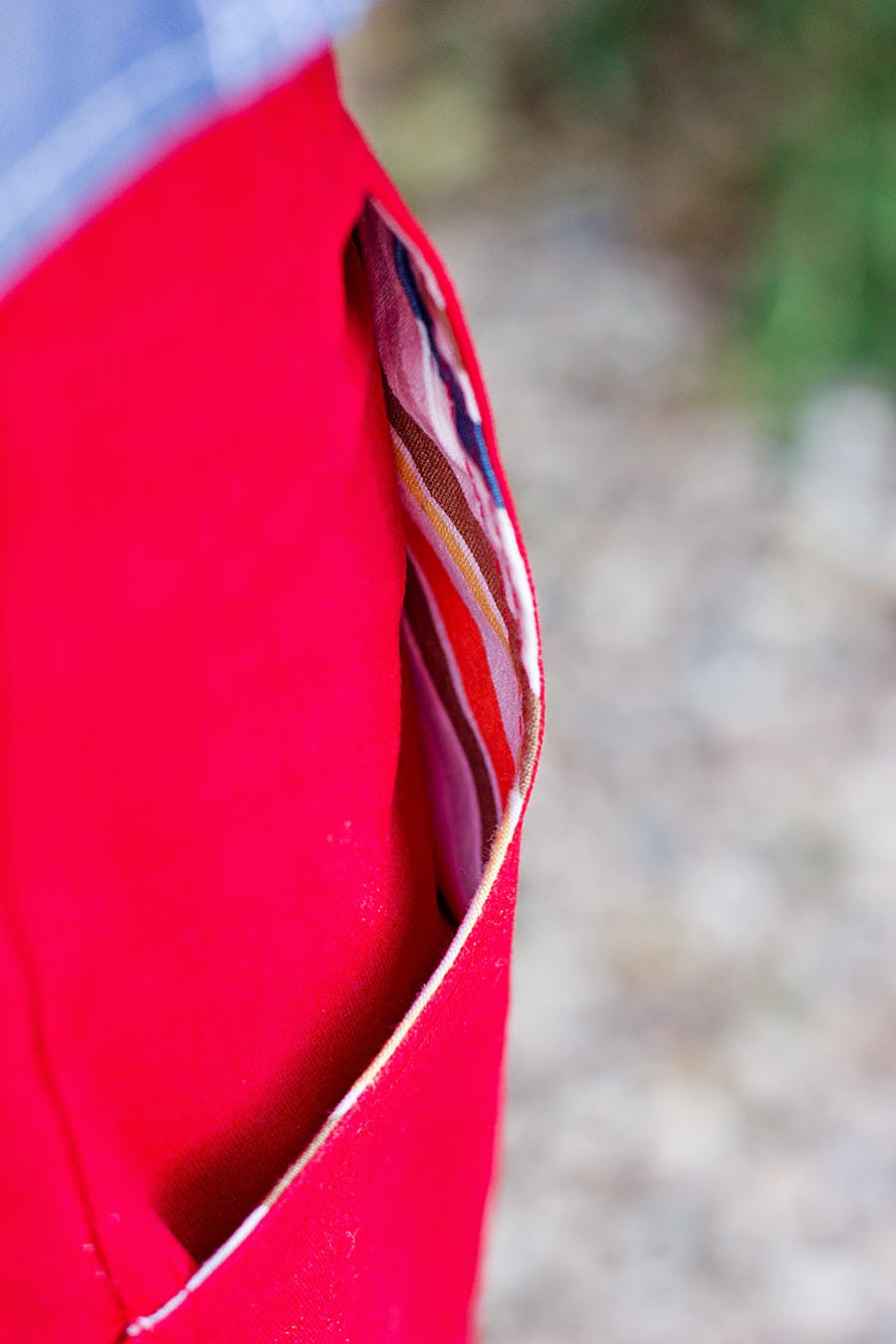 The color looks really weird in this picture, hm.  Anyway, I used a fun print on the pocket linings, just like he likes. 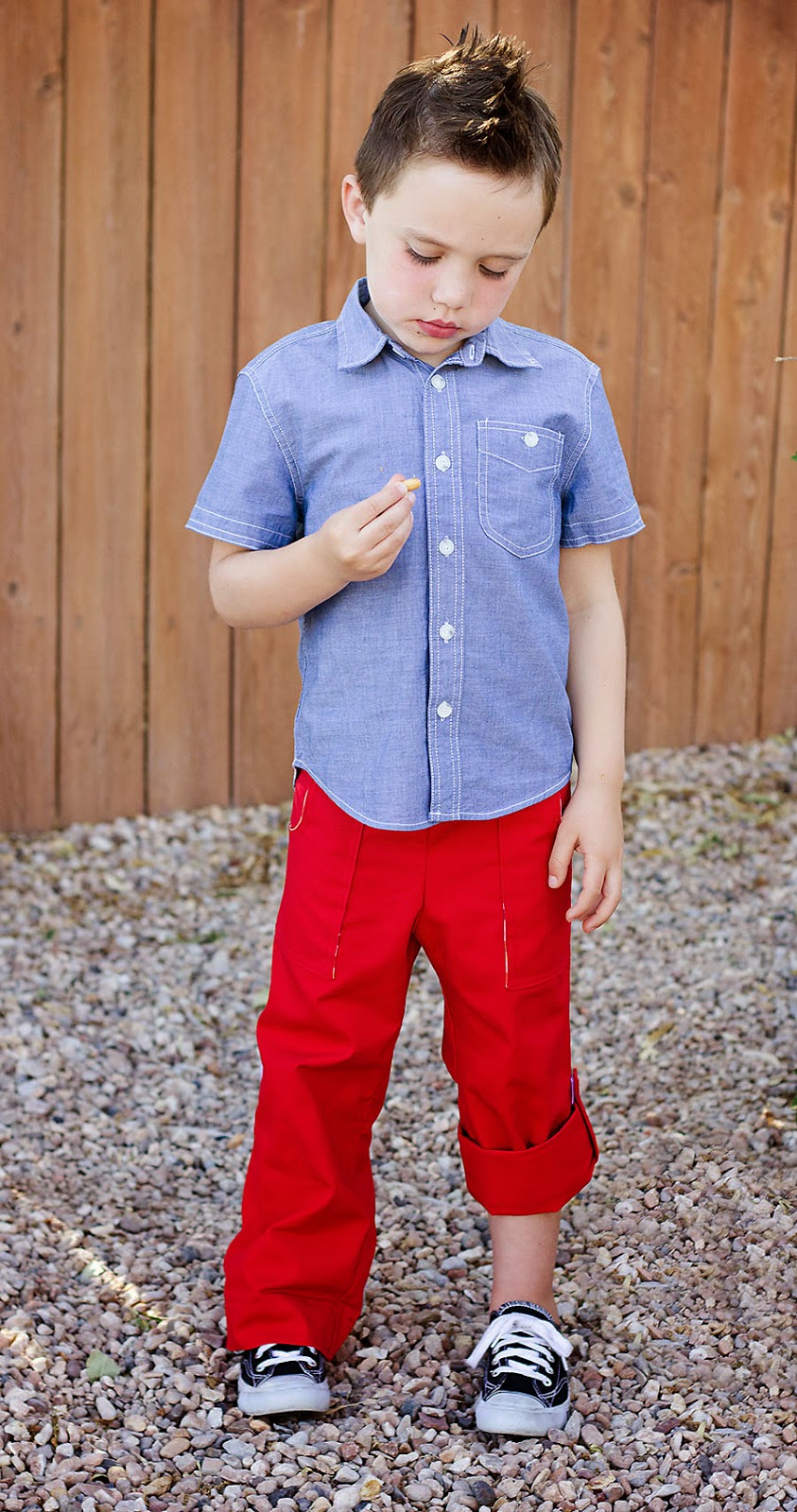 The pants are a size 5 and still have plenty of growing room, maybe he will get some use out of them in the fall too. 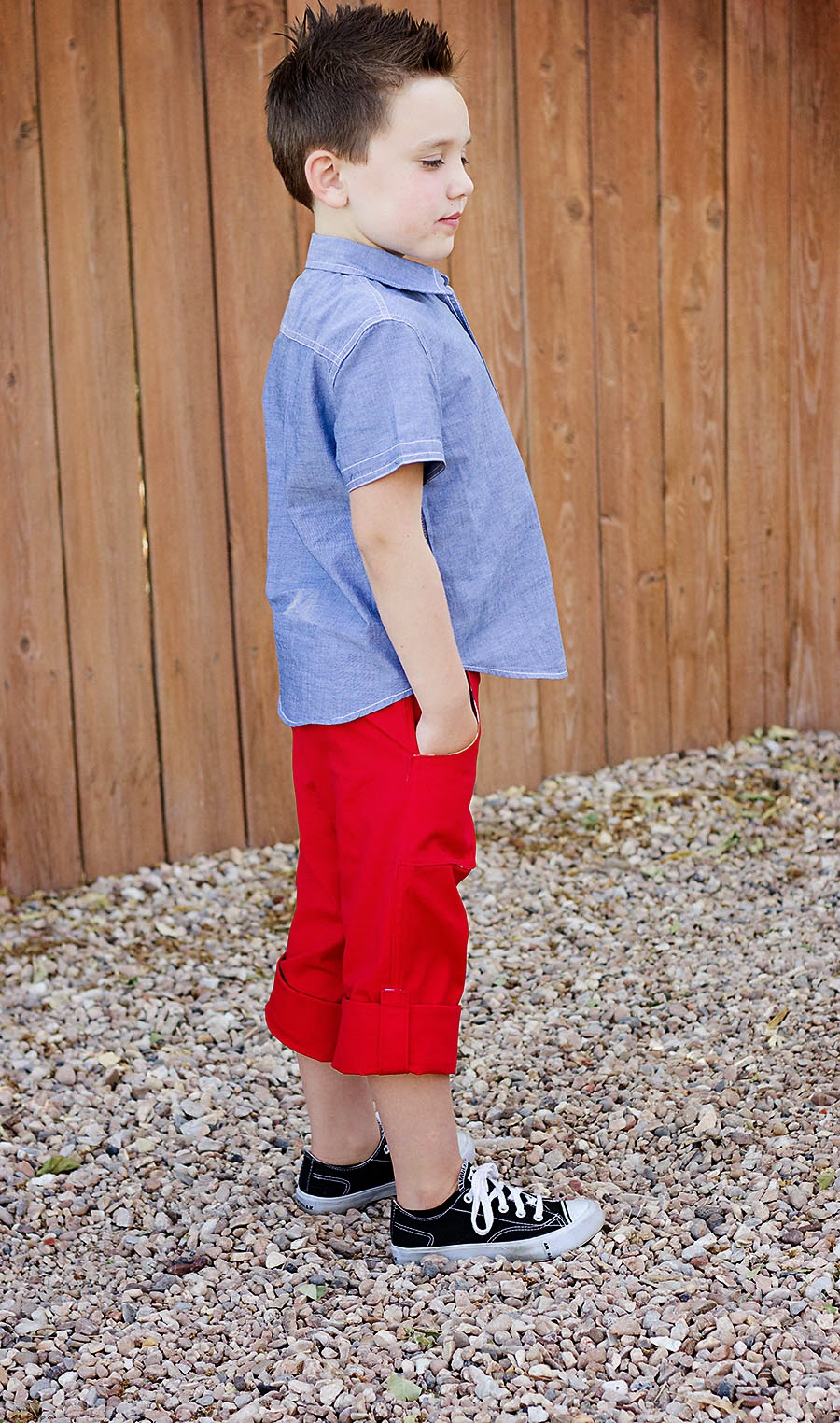 Unlike some things I make him, he was totally excited about these and couldn't wait for them to be done.  Score!
Posted by brittney at 9:16 PM 6 comments:

This is the same pattern as last time, but this time I used view c. 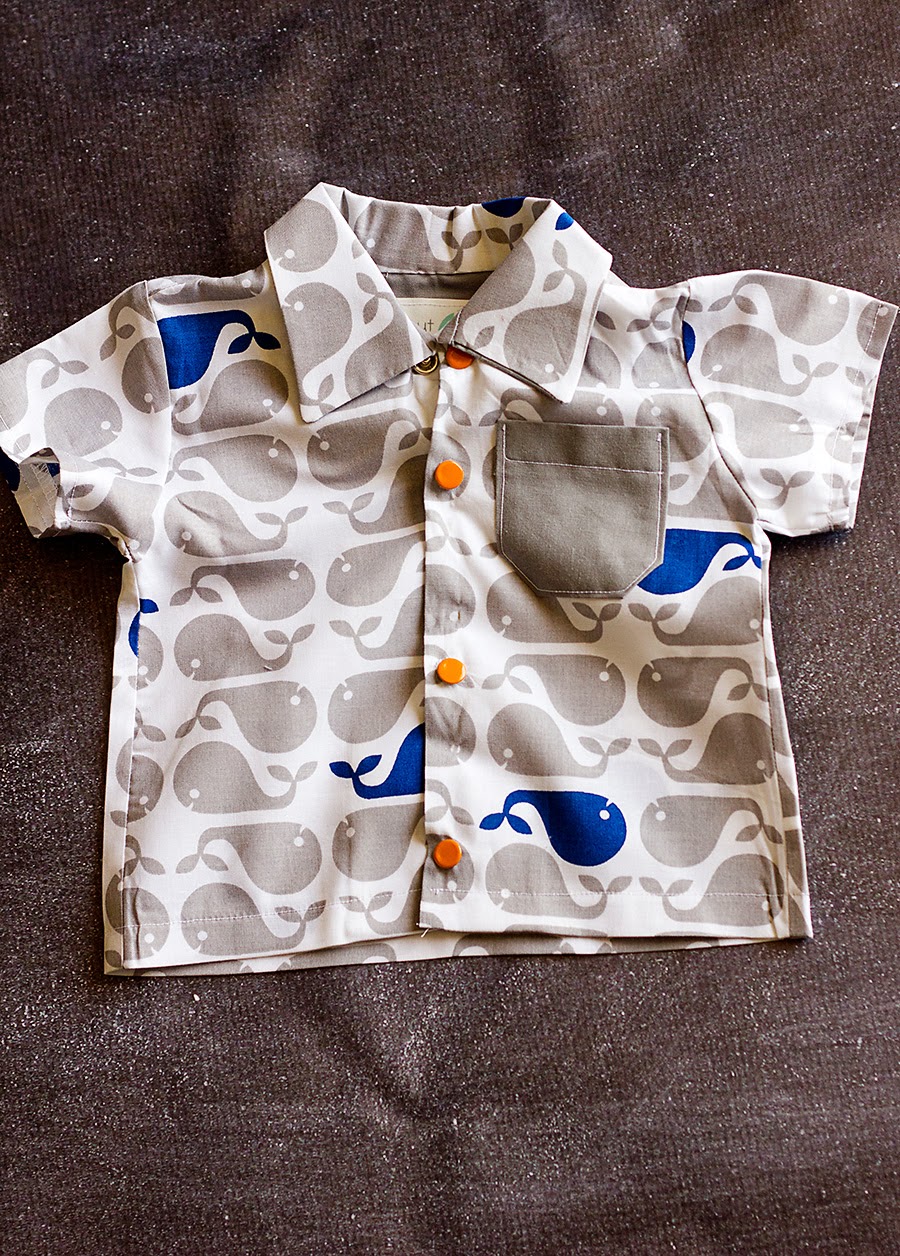 I usually try to stay away from novelty prints, but the whales just killed me dead (and so did the fox print... I just haven't decided what to do with that one yet).

I don't *love* the orange, in my mind it was going to be a brighter, more primary shade of orange.  But apparently my local shop's button/snap inventory has been severely diminished.  In fact, this was the only orange snap and also only two orange button sizes.

And I should have taken more care in lining up the whales, but what's done is done. 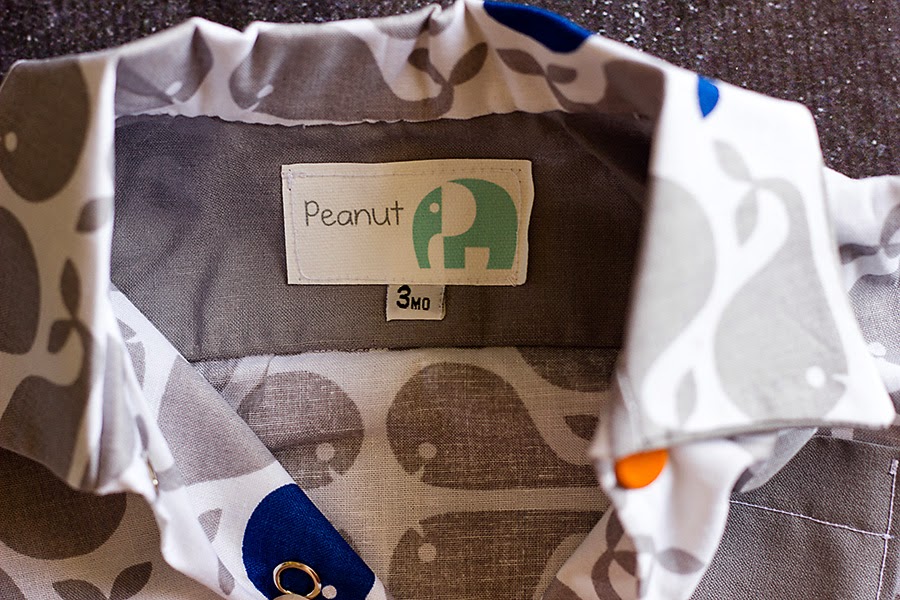 I lined the yoke again like I did with the romper, and this time it is a legit 3month.  I should invest in a few smaller sized tags... meh...

I did work out the collar/facing issue a bit better this time.  That means next time I'll be pro, right?  ha! 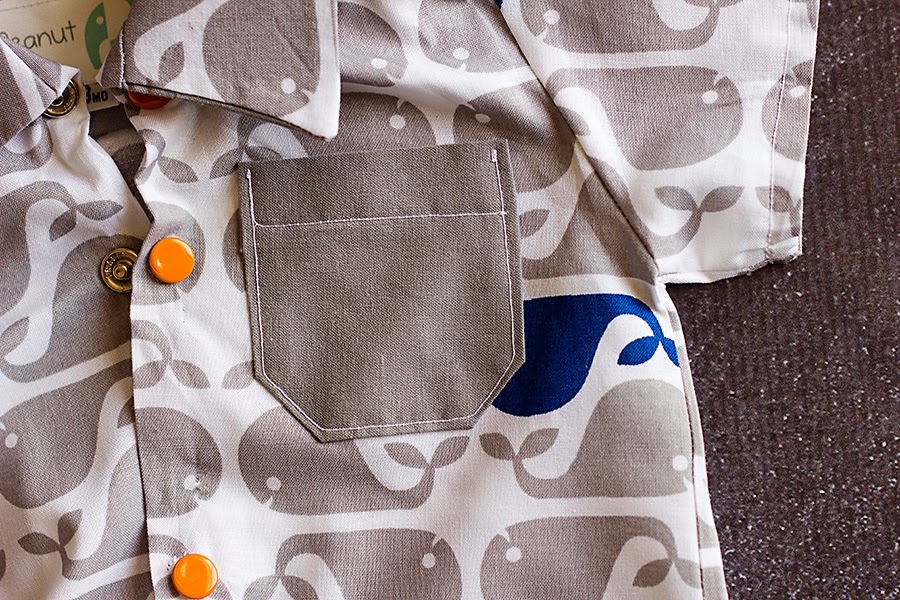 The thought of matching the print for the pocket made my brain hurt, so I went with a contrast. 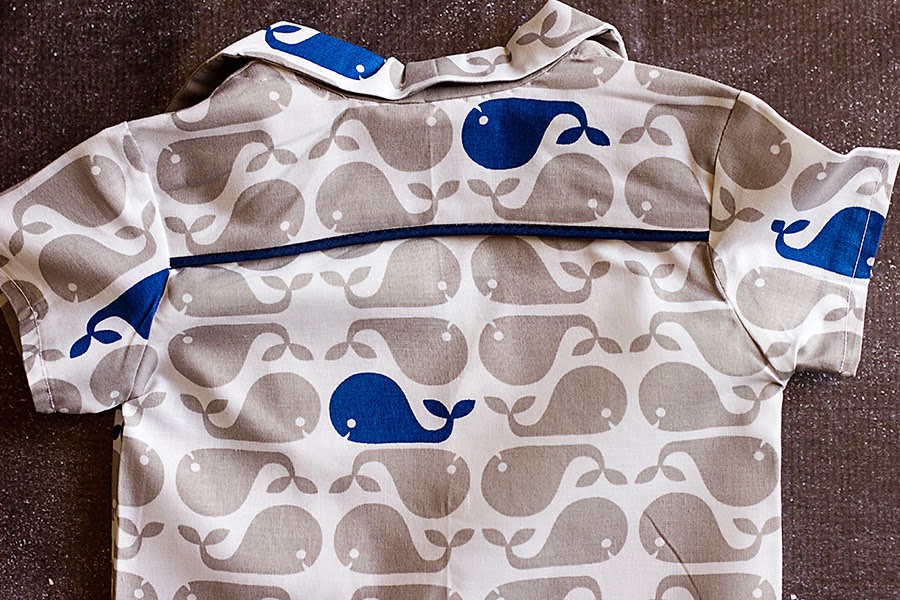 A little piping at the yoke, because who doesn't love piping? 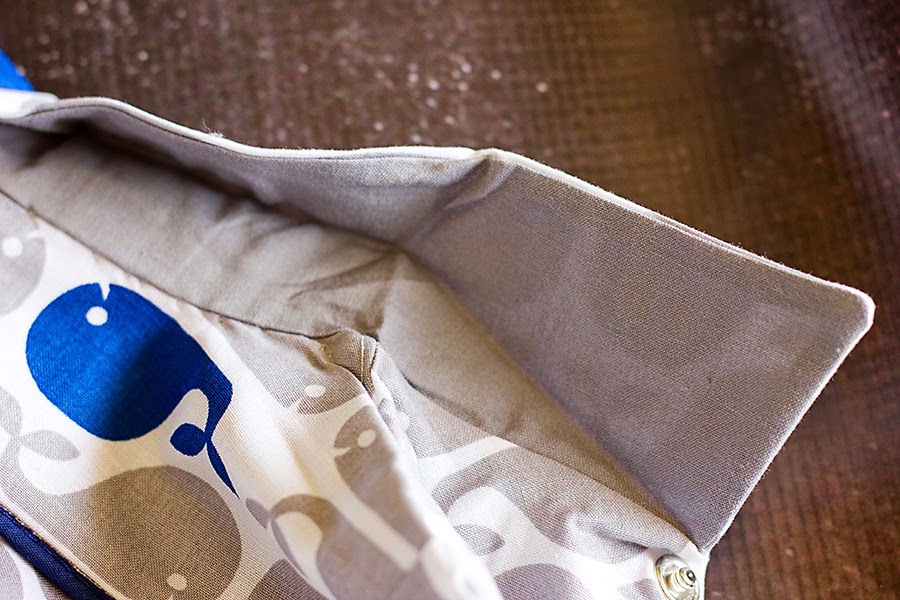 Since it's all about the details, baby, a contrast under collar also.

Email ThisBlogThis!Share to TwitterShare to FacebookShare to Pinterest
Labels: for Sam, kwik sew

Oh how I heart a romper on a sweet baby boy.  I purchased one at Target a few months ago and MC  (seriously, go check out her sewing, you wont be disappointed.  She is my little boy shirt sewing hero) said she knew of a pattern similar, Kwik Sew 3730.  I was feeling up to sewing today, so that's what I did, not to mention if I don't get started soon baby boy will be all kinds of naked. 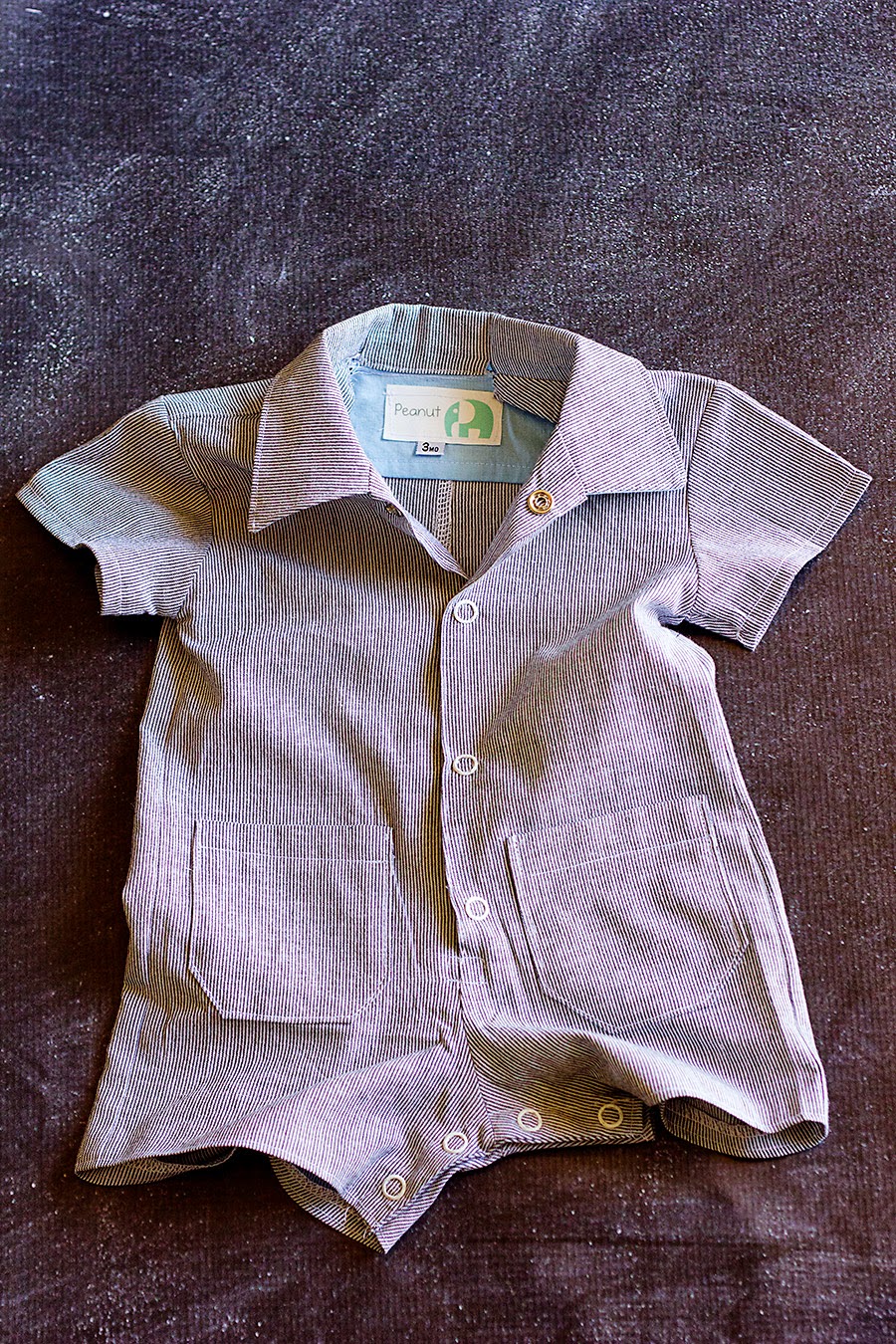 I used a lightweight shirting, it was quite slippery but it feels so nice. 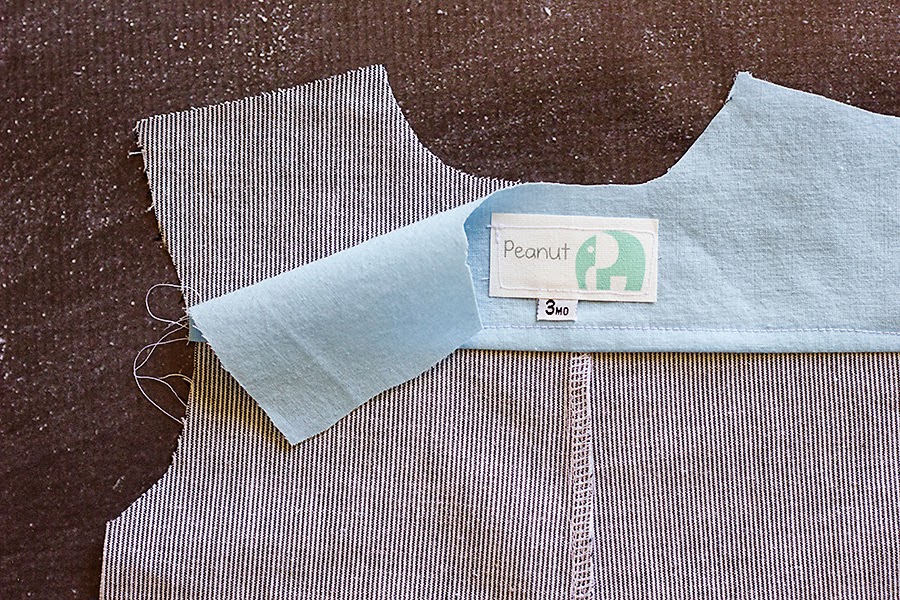 The only (intentional) change I made was to line the yoke.  I wanted to be able to attach my label and size tag, so I just cut two yokes and sandwiched the back piece in between.  I like that it gave a nice clean finish on the inside and is a fun pop of color. 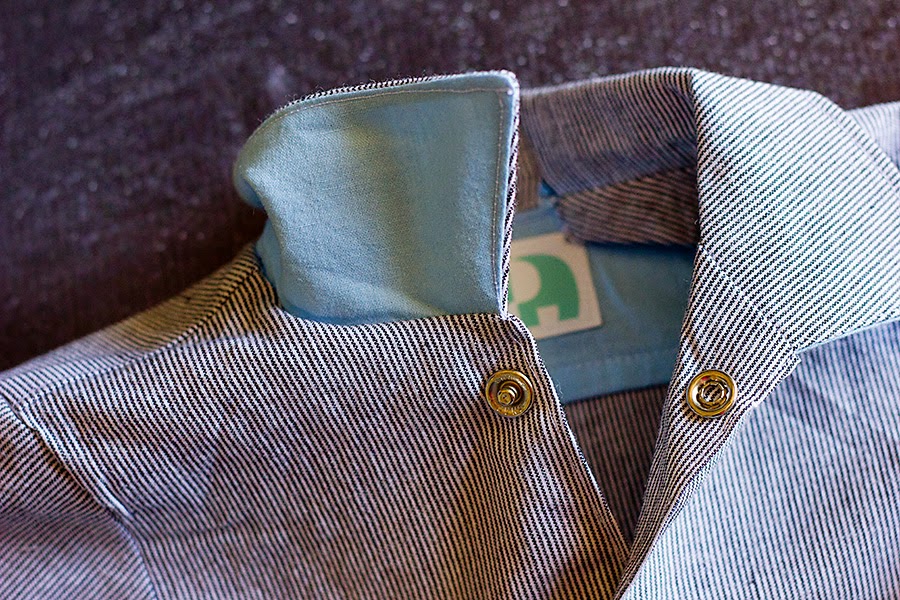 For the under collar I also cut it in a contrasting color.  Little details make me happy. So, the instructions kind of really were bad.  And the inside facing was waaaay too long, so the insides are all kinds of ugly.  It kind of made me sad.  I didn't bother hand stitching the collar closed as the facings were messed up and I was just mad at that point.  But now I know how to adjust the next one (that is already halfway done btw).

Technically this garment is a size small, but looking at the measurements it seemed to be about equivalent to the size 3month things I have sewn already, we shall see. 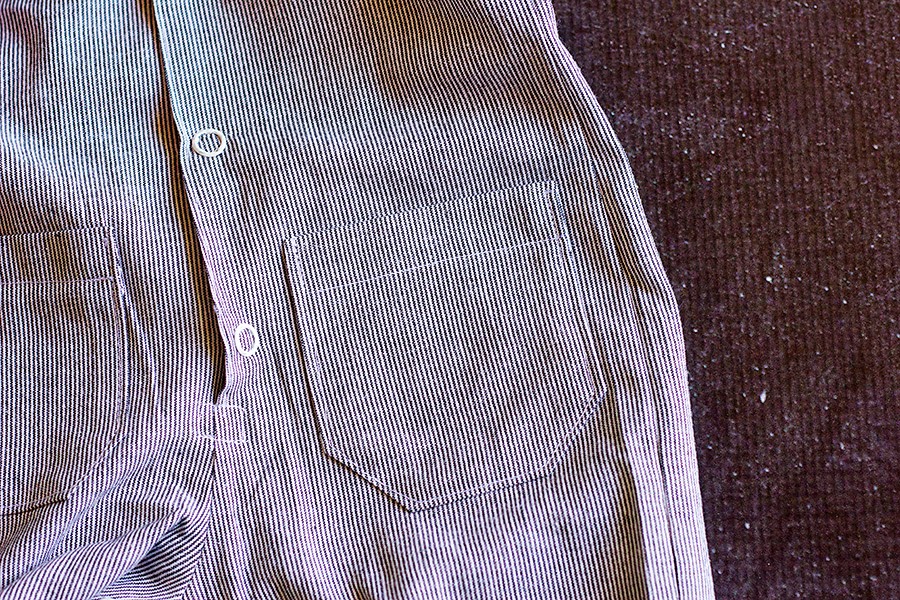 I chose to go with snaps instead of buttons, much easier for dressing a wee one, and those pockets kill me dead.  Not like they are needed in any way, but they are adorbs.
Posted by brittney at 7:05 PM 2 comments: