Confession, I still don't love sewing for Halloween.  I should, because my kids get so excited about it.  And the twins are still wearing their Elsa and Anna from last year, so I shouldn't mind putting a lot of effort in to something that will be well loved, but I just can't...

This year the twins knew immediately what they wanted to be.  Georgia wanted to be a witch, then I suggested maybe Izzy should be a kitty (the witch's kitty).  It stuck and they never changed their minds.  I will be sad someday when they end up without coordinating costumes. 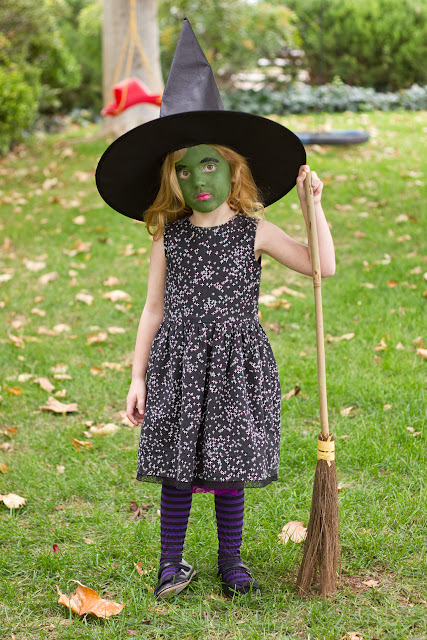 For Georgia, we had borrowed a costume from Grandma but managed to misplace it, so I talked her in to using her recently made Fairy Tale dress with some cute tights.

She wanted a green face 'cause that's what witches have' but with the stipulation that she 'was still a nice witch'. 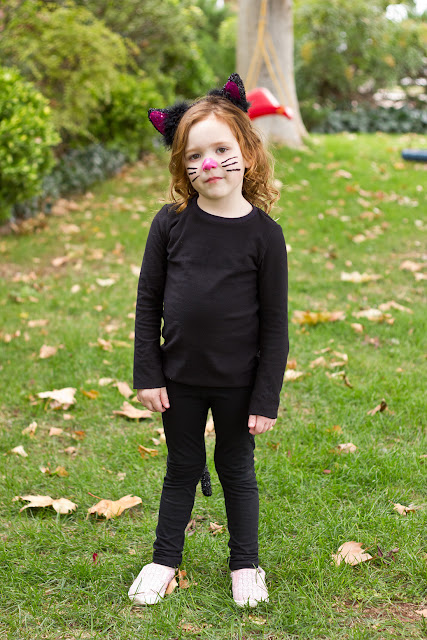 Elizabeth the kitty has an Oliver and S School Bus T-shirt in a size 4 with length added to the sleeves.  I used a RTW pair of leggings and a kitty kit from the Halloween aisle. 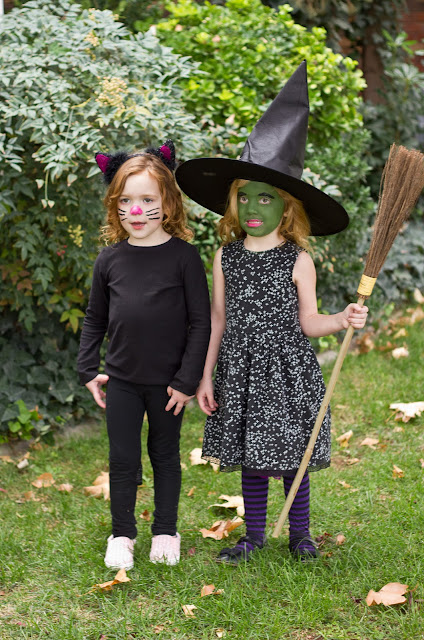 They make an adorable pair, I think. 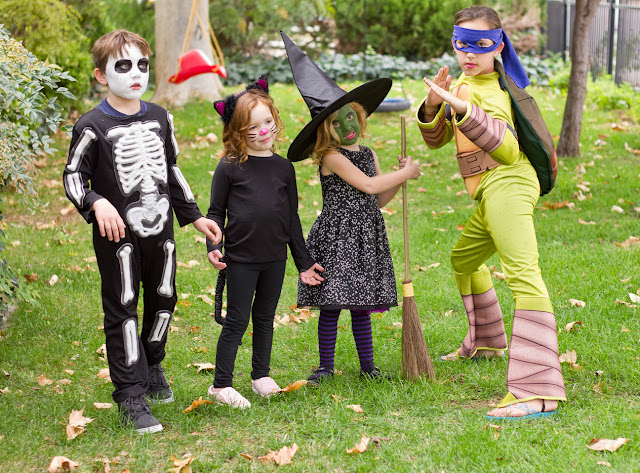 Abby went easy on me and chose a Ninja Turtle, the mask from the kit was too small, so she used a scrap piece of knit to make the eye band.

The kids were on their way to a church activity and they requested no masks at the party, so Jack used one of his old costumes from a few years ago.  At the time we had to roll up his pants and safety pin them.  So glad I didn't cut them off like Ben suggested! 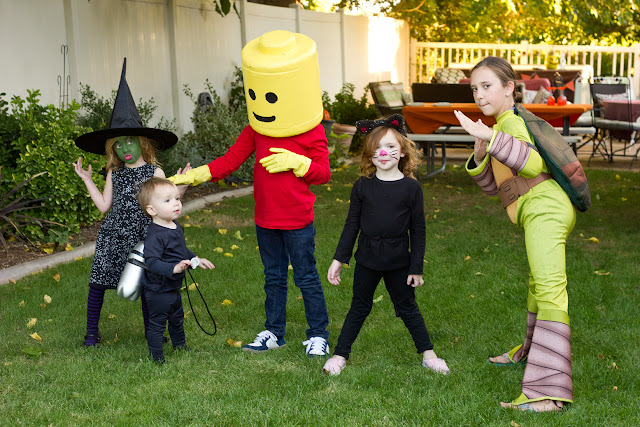 He really wanted to be a Lego man, so for our family party and his school parade that is what he went as.  He will do the skeleton for trick-or-treating as he can't see out of the head when it is dark outside, plus it would have been hard to go door to door in. 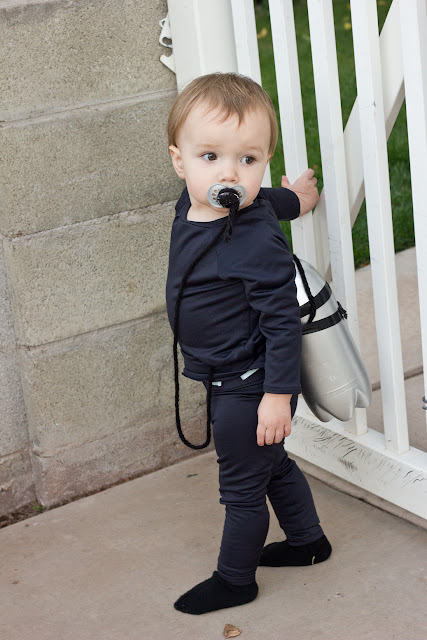 Dear Pinterest, thank you.  I saw this idea popping up early in October and decided to give it a go.  He is my only baby to love the pacifier for this long.  Iz took one until about 6 months, but none of the other kids did.  He depends on it, it's bad.  I try to keep it limited to nap/bed time, but sometimes if he is crazy bad in public I give in, it calms him immediately.

Anyways, I used the O+S  Field Trip Raglan, size 18 months, and the O+S Playtime leggings, size 18 months.  I found this rad french terry that has a bit of a sheen to it, I knew it would be perfect for looking like a wet suit.

I couldn't find a pair of black socks in or around his size, so while I was at the dollar store today picking up the black tape and yellow gloves for Jack I spied a pair of toddler sized mittens.  Perfect!  I just sewed the thumb hole shut and cut it off, it worked out great.

He didn't love when we strapped the 'tank' to him, which is why it is so low on him, but quickly stopped trying to take it off. 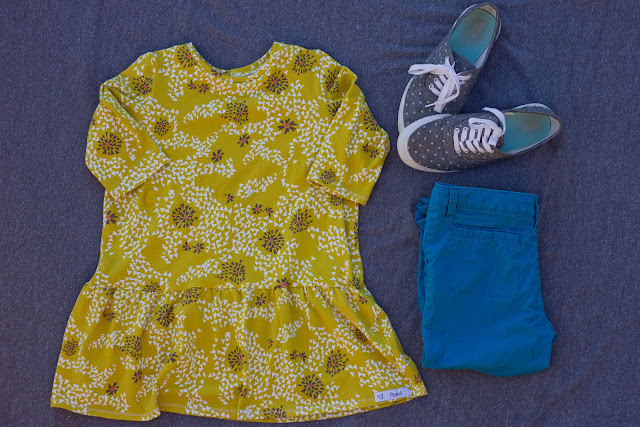 Our family pictures are coming up in just over a week, Abby needed something in our colors so I wanted to make her something cute.  First, though, I needed a trial run.  I took a risk late last night and picked fabric without her approval, but it wasn't too girly and the colors were pretty fall, so I figured she'd go for it.  And she did, she loves it. 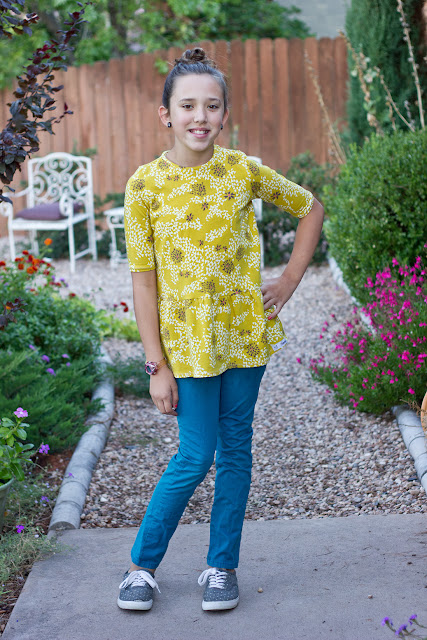 I used my favorite School Bus T-shirt, size 12 with mods.  I followed the instructions on the Oliver and S blog to make the shirt in to a peplum.  I measured to her natural waist before, knowing I wanted to try this, but then panicked that maybe I had done something wrong and I shouldn't cut it that short.  It's not bad, but I think I should have gone a little higher.  That's why this is a test run. 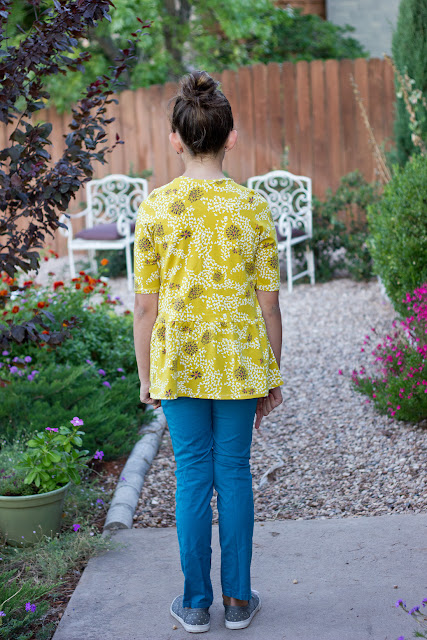 She will wear elbow sleeves year round, so I figure why not go with that length, plus I didn't have quite enough fabric for a full length sleeve.  I squeezed this out of a yard, barely, I was sweating it just a little. 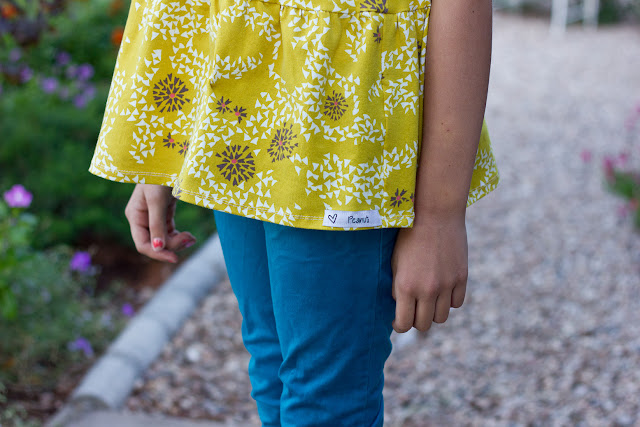 I am so excited my new tags finally came.  My old ones, while I like the look of them better, they were just printed on.  The listing claimed they wouldn't fray or fade, but they did both.  This time I found another shop that makes them woven in, which is what I had a long, long time ago and they were awesome. 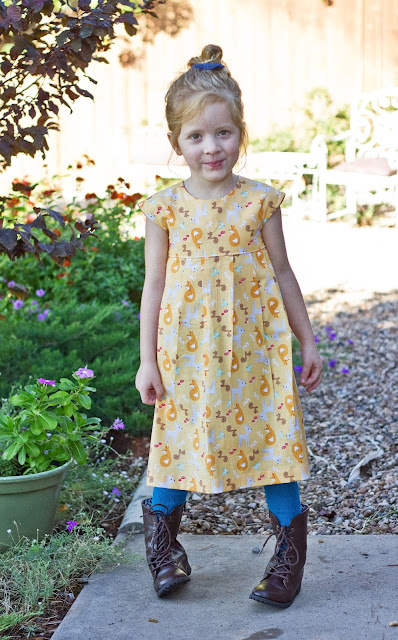 When I bought this fabric, I thought it would make an adorable Geranium Dress.  Rarely do I actually make what I intended when I bought the fabric, but this was an exception.  I made a size 4, these dresses seem to last forever so I figured I'd help it out a bit by adding some length.  Though, sadly, I don't know how long this one will last.  As I was sewing the bodice to the skirt I noticed these odd lines running through, turns out the fabric is pretty damaged in a few spots.  I am so annoyed, but I was far enough in and without any extra fabric, so I finished anyways. 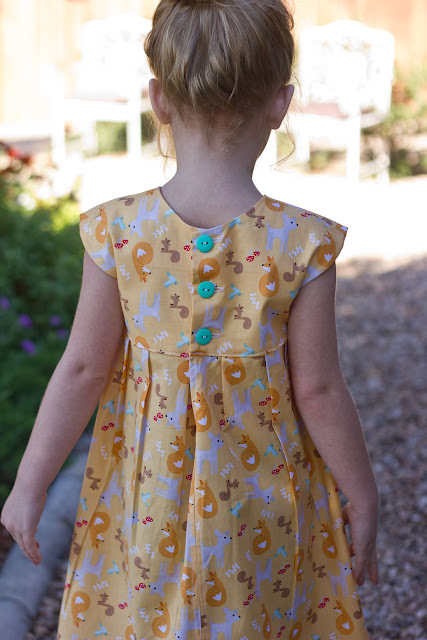 I swear the buttons and the back bodice aren't wonky, I couldn't get her to stand still/stand without puffing out her chest.  There's finally a nip in the air this morning and she wasn't that interested in being outside.  I am so ready for fall!
Posted by brittney at 10:49 AM 1 comment:

Email ThisBlogThis!Share to TwitterShare to FacebookShare to Pinterest
Labels: for the twins, geranium dress, kcw, made-by-rae 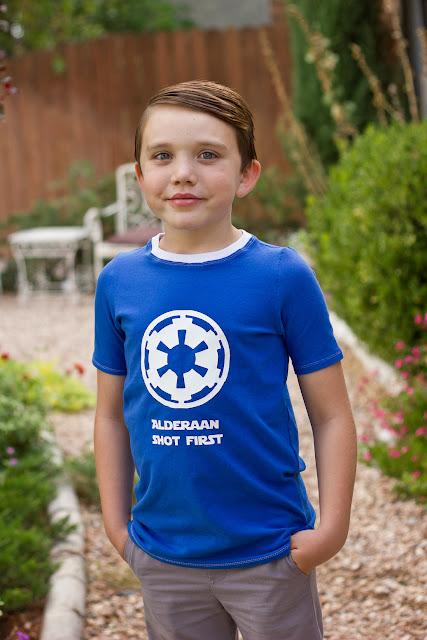 Catching up on blogging for yesterday's Kids Clothes Week make.  It was a busy day, so I snuck in a quick project in the morning.  It didn't hurt that this was already cut out and shirts are crazy fast.  A School Bus tee in size 8 with a heat transfer vinyl, a copy of a long ago and long outgrown favorite. 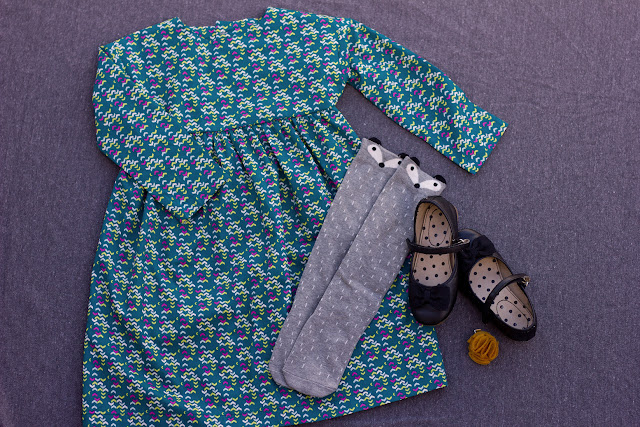 Today I grabbed a cut of fabric on my way out of the room after laying Sam down for a nap on a whim.  I had no plans for it, but a few hours while he slept and the twins played quietly.  I picked out the Oliver and S Playtime Dress, and made a size 4.

I was able to get it out of a yard and a half rather than the two yards in the requirements, which is always a plus!  I added an inch to the sleeves and an inch and a half to the skirt. 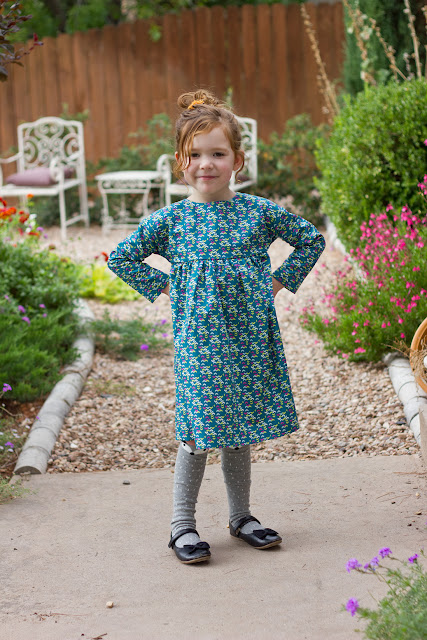 I love it and so does she. 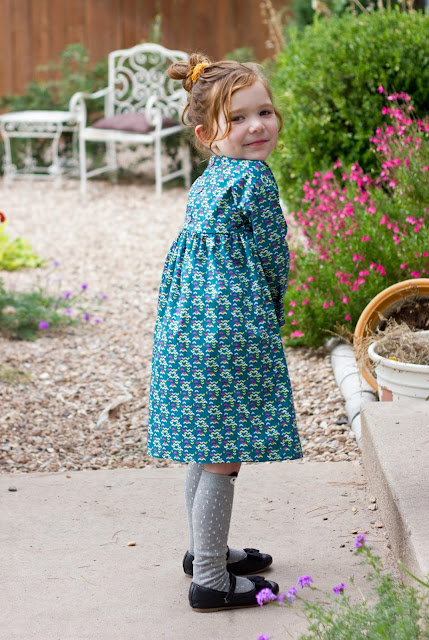 She posed herself most of the time, I have thirty of her making silly faces or doing things with her hands/arms.  She thought it was great fun and refused to change poses until she heard the shutter click. 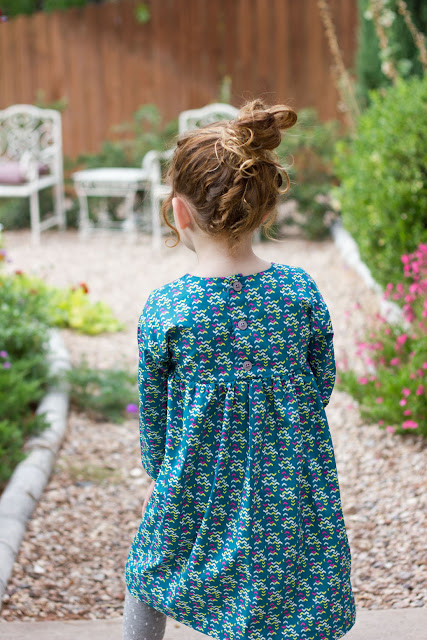 I don't have any particular plans for the rest of the week, but I do have a few shirts already cut and a Fairy Tale I set aside two weeks ago and should probably finish before it falls in to the black hole that is my UFO pile.

Posted by brittney at 8:08 PM No comments:

I snuck a few minutes in here and there tonight before bed to knock out a quick pair of pajamas for Sam.  I cut this pair and another out last week, which made it even faster. 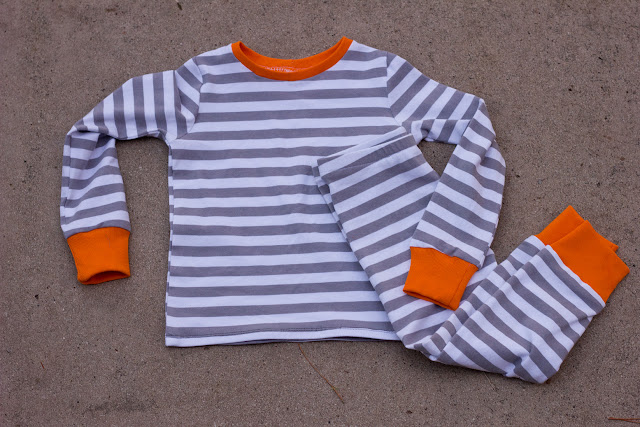 Last week I made this pair as a test run, I used the Peekaboo Alex and Anna winter pajamas in size 2t knowing they were a very snug fit.  I liked the bottoms, but not the top.  The top gaped a ton at the neck (not noticeable in the picture, but very in real life) and didn't like that the sleeve cap was basically flat.  I decided to go with my stand-by Oliver and S School bus tee in a size 2T for the real one, and as expected liked it much better. 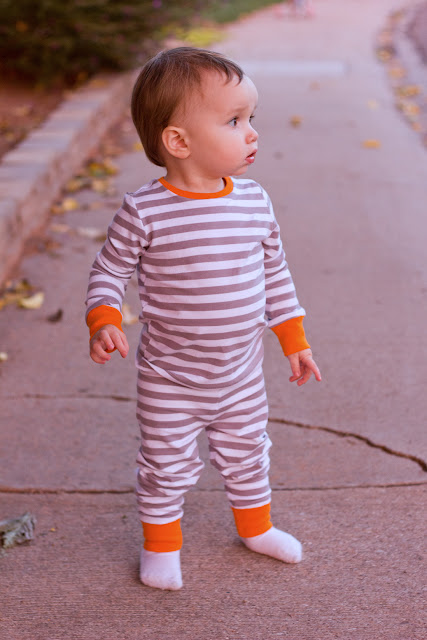 I used some Riley Blake knit that I have been hoarding, and they turned out just like I wanted.
Posted by brittney at 7:47 PM 5 comments:

It's that time of year again, Kids Clothes Week.  While I try most weeks to knock a few things out, I usually push myself this week to make at least one thing for each kid. 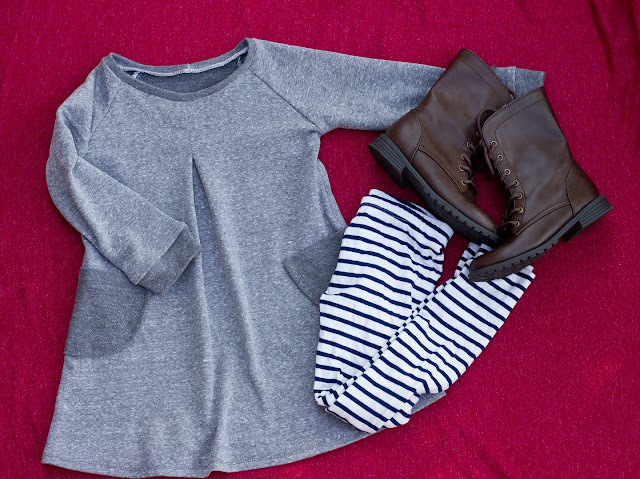 So I started off easy, well, somewhat easy.  Ottobres are always a beast to trace.  I made #13 from the 4/2015 magazine in a cozy, soft french terry. I made size 104cm, which as far as I can tell translates pretty well to a 5t, that's the size I have started to buy for them (if I buy) from RTW. 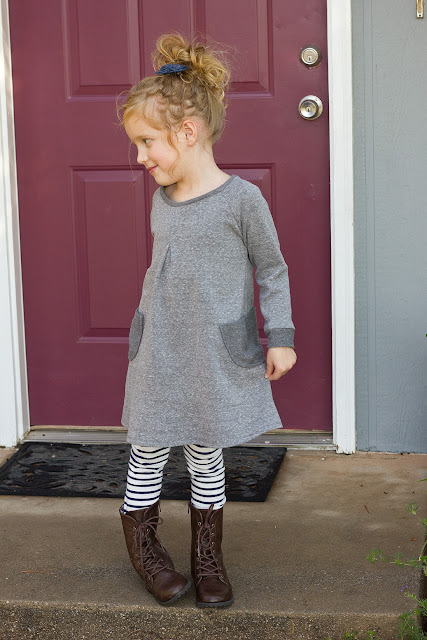 It was a really easy sew, and she absolutely loves it.  Again, the part that took the longest and most thought was tracing off the pattern. 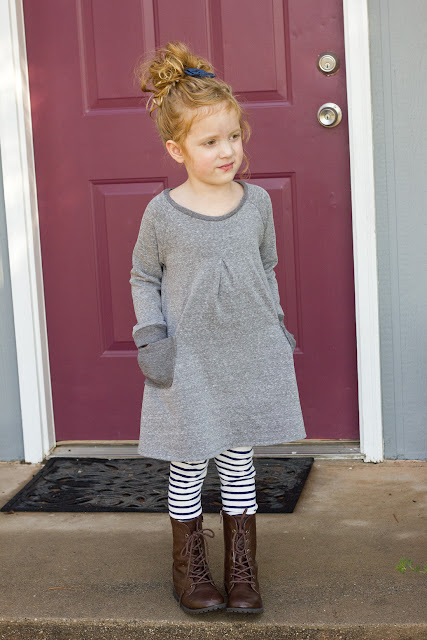 Pockets were a major plus in her book.  I used the wrong side of the FT for the pockets, cuffs and neckband.  The fit is a little big on her, but since she and Elizabeth still fight over clothes I made it big enough for Iz, too. 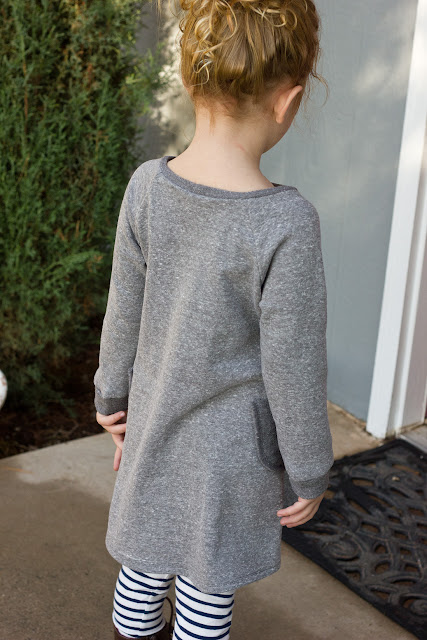 Now I have the internal debate, make another because I love it that much, or move on to another pattern as I have so.many.patterns.?
Posted by brittney at 11:38 AM 5 comments:

Email ThisBlogThis!Share to TwitterShare to FacebookShare to Pinterest
Labels: for the twins, kcwc, Ottobre

Ever since I heard about the monochrome project I have had this specific dress in my head.  I wanted to make a thick striped, pleated Fairy Tale, and a white with black block printed Fairy Tale.  Well, one of those came together in time.  Then I saw a gorgeous Cotton and Steel black and white print at my local shop, then spotted a pretty black lace and knew it was fate. 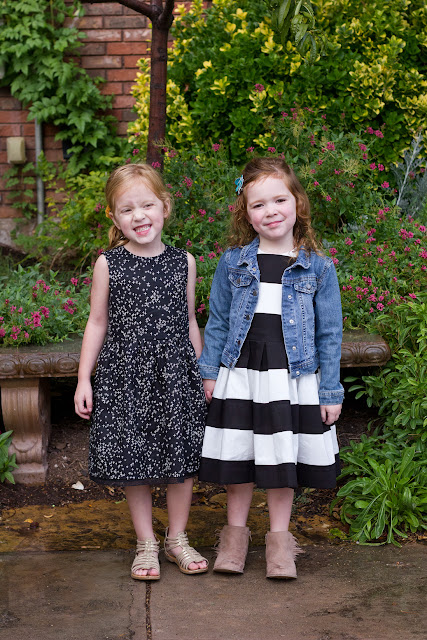 The girls were so excited when they saw the dresses. 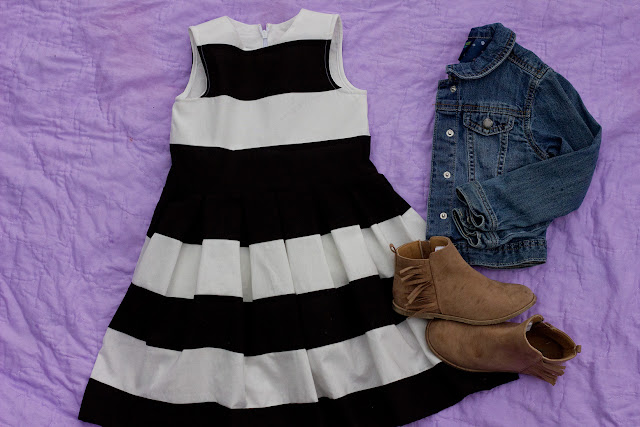 I can't believe I've never made a sleeveless version of this dress, I love it.  In retrospect, I should have had white at the top of the skirt, oh well.

I pieced together the black and white fabrics, then cut out the dress.  I found it oddly satisfying. 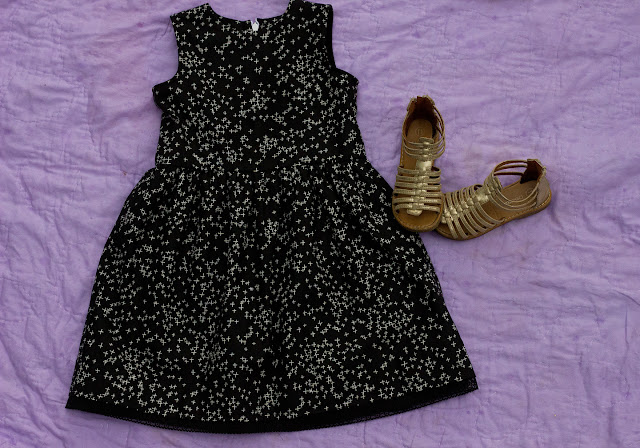 I made the underskirt the same length as the over skirt and added lace to it, but it wasn't like I had imagined.  In my mind, you'd be able to see it peeking out at all times, but that didn't quite work.  So I also added some to the outer skirt.

I also left the darts off both dresses. 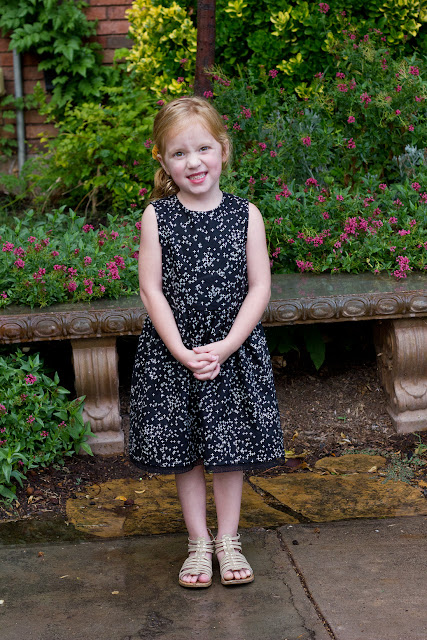 George loves this one.  I tried to put the stripes on her, and she said she wanted 'the pretty one'. 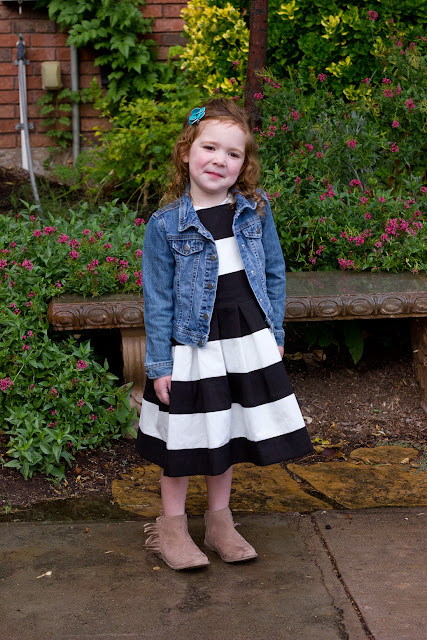 And Iz was just excited to get a new dress.
Posted by brittney at 7:56 PM 3 comments: