This season's Kid's Clothes Week theme was Storybook, I hadn't planned to sew anything based on the theme, but then Ben put a riddle on the fridge for Abby and I to try and solve.  Hate to say it, but I had no idea, ha!  But when he told us what it was he also mentioned I should put it on a shirt, so I did! 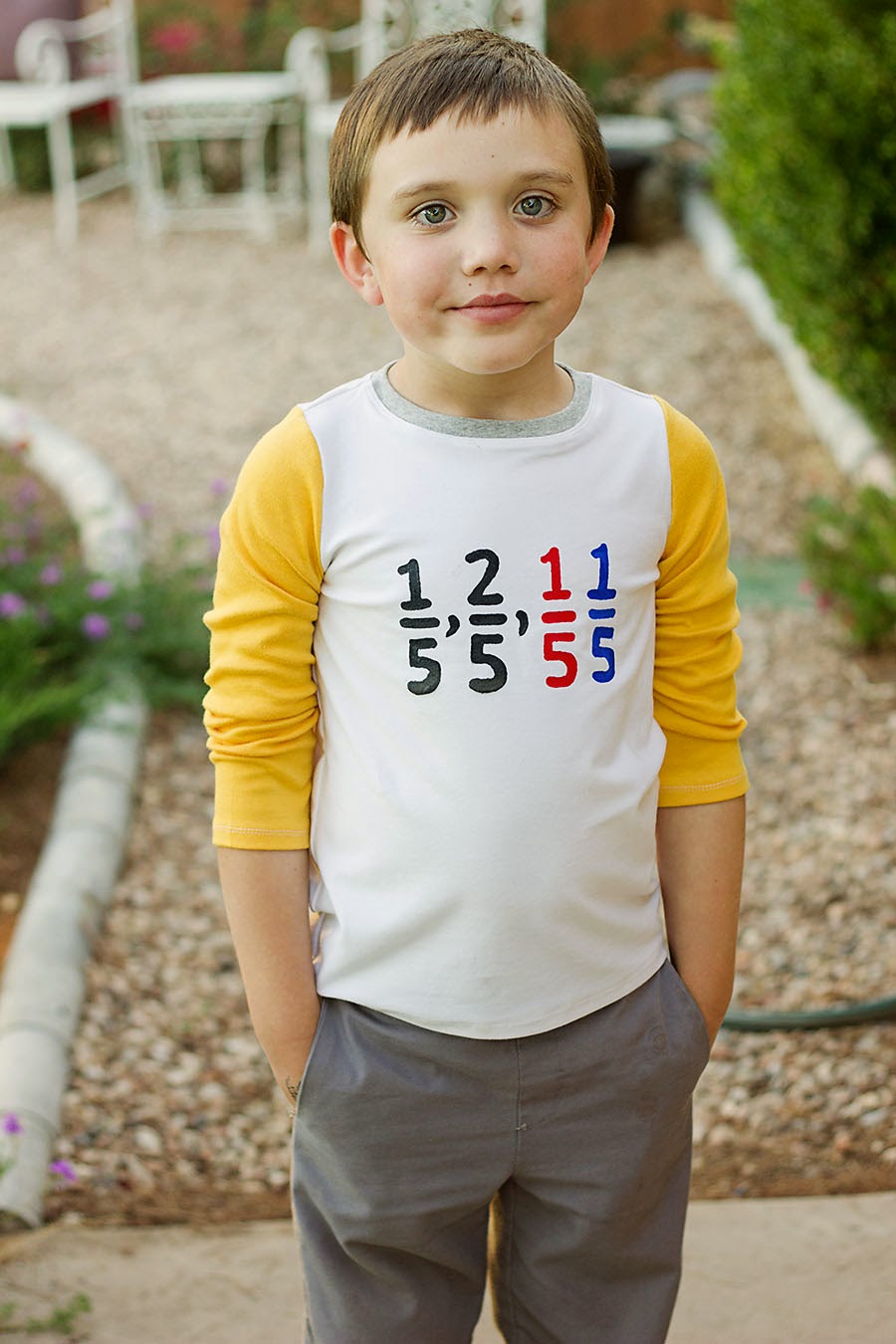 I used the Oliver + S School bus tee, a straight size 6.  He was at school so I couldn't measure the length of the longs sleeves, though I don't think I would have because his height was on the low end of the chart for a 6, but apparently he must have really long arms.  The sleeves ended up about 3 inches too short, so I showed him how to push them up to make it look like it was maybe meant to be that way.

He is wearing his Art Museum Trousers from February.  These are probably his most worn pair of pants- ever.  They are still just long enough, but he was playing with a friend the other day and got a small hole in them under the knee, in a spot that can't be fixed.  But, being he has had a solid 9 months of wear from them I can't really complain, I only wish I could remember where I bought the fabric to get some more because it is oh so soft and has held up really well.

So, have you figured out the riddle?  One fifth, two fifth, red fifth blue fifth.  Jack was pretty excited to see it when he got home today, he wanted to read the book but we have managed to misplace it (not a big surprise),  Abby was pretty jealous.
Posted by brittney at 8:57 PM 8 comments:

The twinsies decided really early on they just *had* to be Elsa + Anna for Halloween, like I am sure many, many other girls will also be.  They couldn't be talked out of it and insisted Jack be Olaf, well, Jack wasn't interested so Sam stepped up and took one for the team.

Since I didn't want to be like every other under 10yo girl, I decided to do more of an 'inspired by' set of costumes. 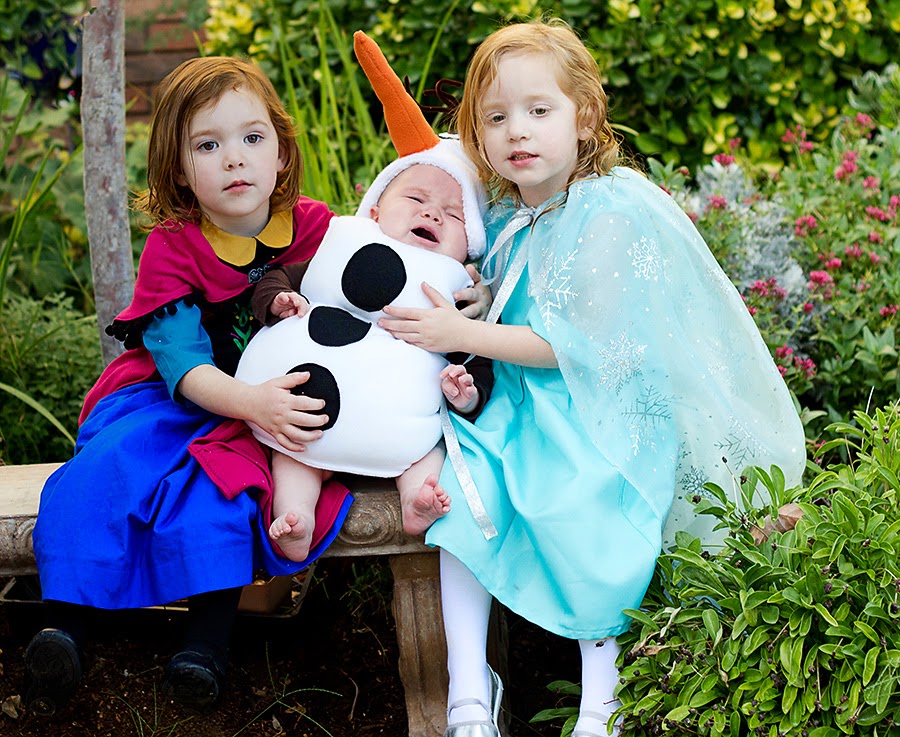 He looks thrilled, right? HA! He really doesn't mind the costume, he just didn't like them holding him. 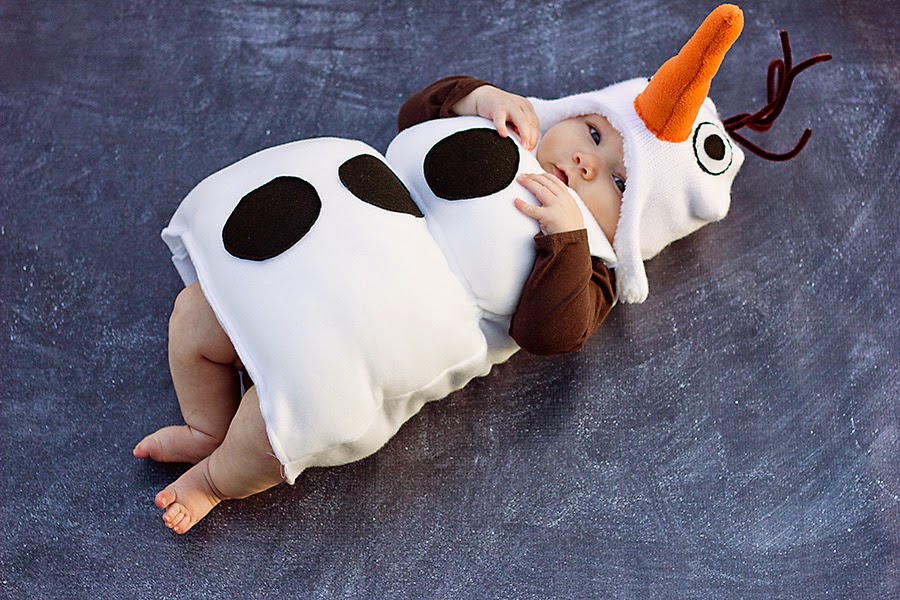 I used the free tutorial/pattern for Olaf found on the Peek-a-boo pattern blog, it was super easy to follow.

I bought a hat and hand sewed the face on.  The eyes are felt, the nose is fleece and the hair is pipe cleaners.

Under his costume is his football onesie.  It's looking like it will be a warm one, but if it gets too cold I have a pair of pants to add. 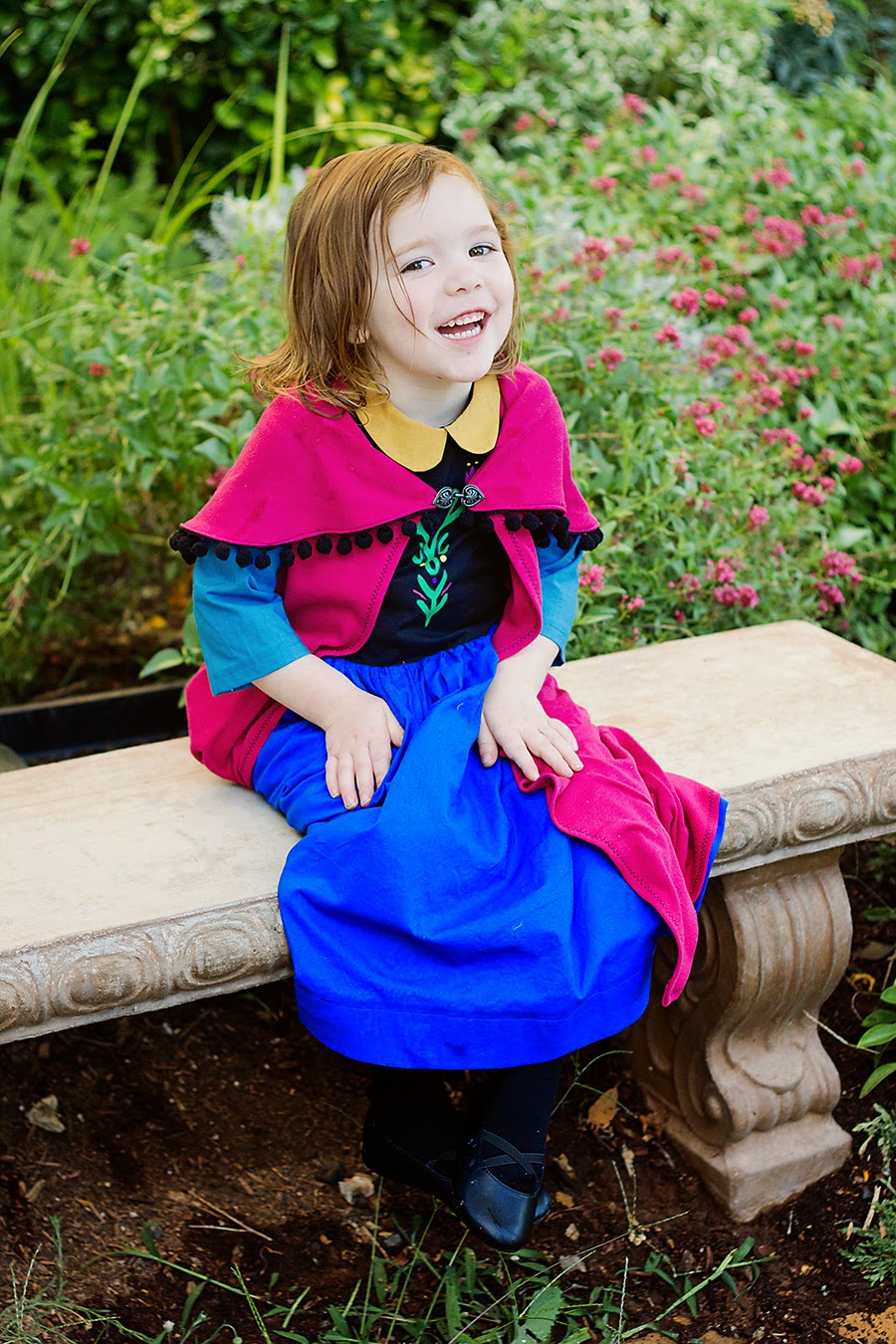 Next, my little Anna.  How lucky am I that they each picked one and didn't fight over Elsa.

True story, I have never seen Frozen.  I had to google the characters, ha!  The kids watch it at their grandparent's house, but I am thinking we might need to get it for Christmas. 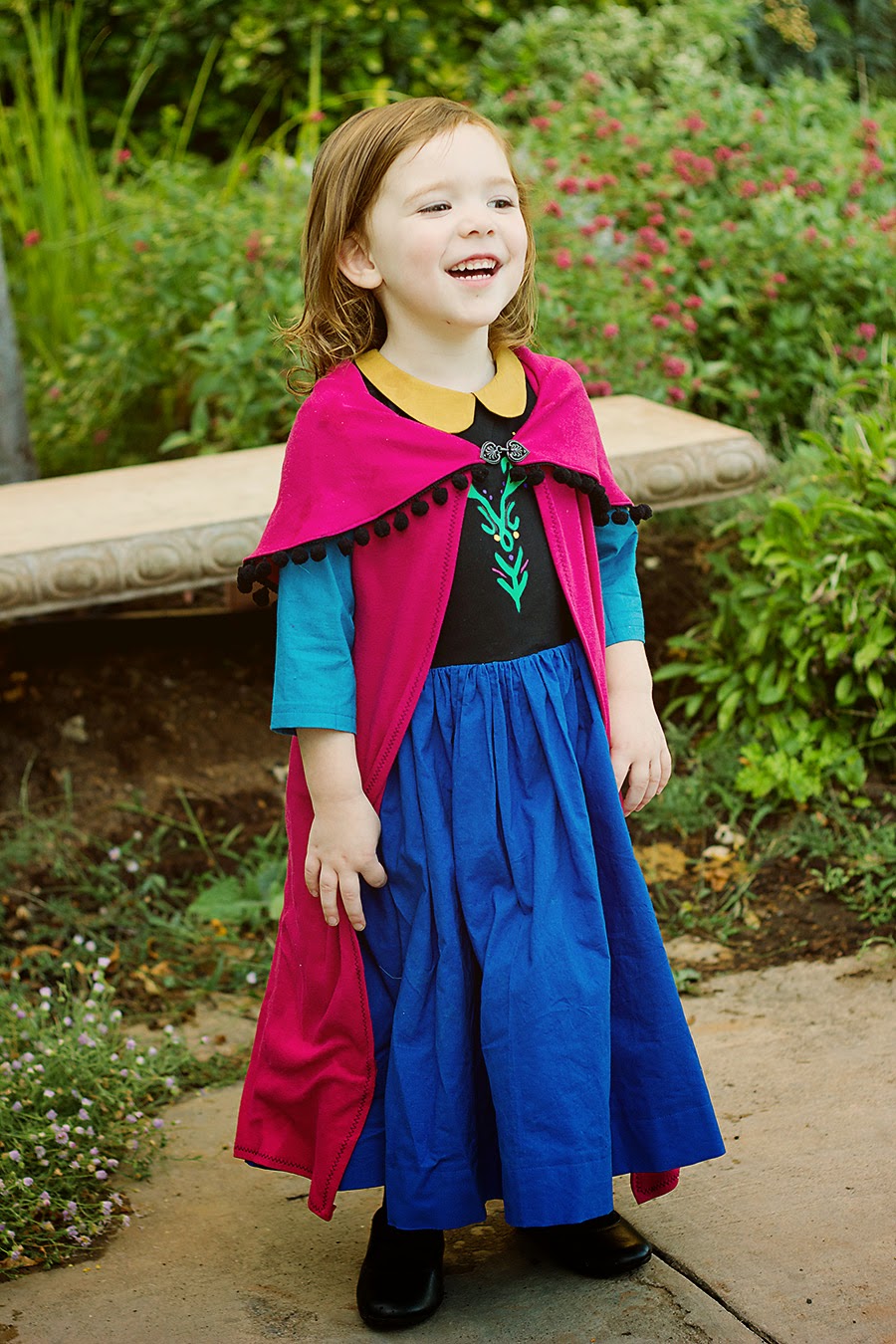 The dress was inspired by this one in the O+S flickr group.

The dress is the Oliver + S Fairy Tale Dress, size 4 minus the darts.  The sleeves are from the Library Dress, the skirt was lengthened with added width and the front was painted on.

For the cape I used the School Bus Tee as a base. 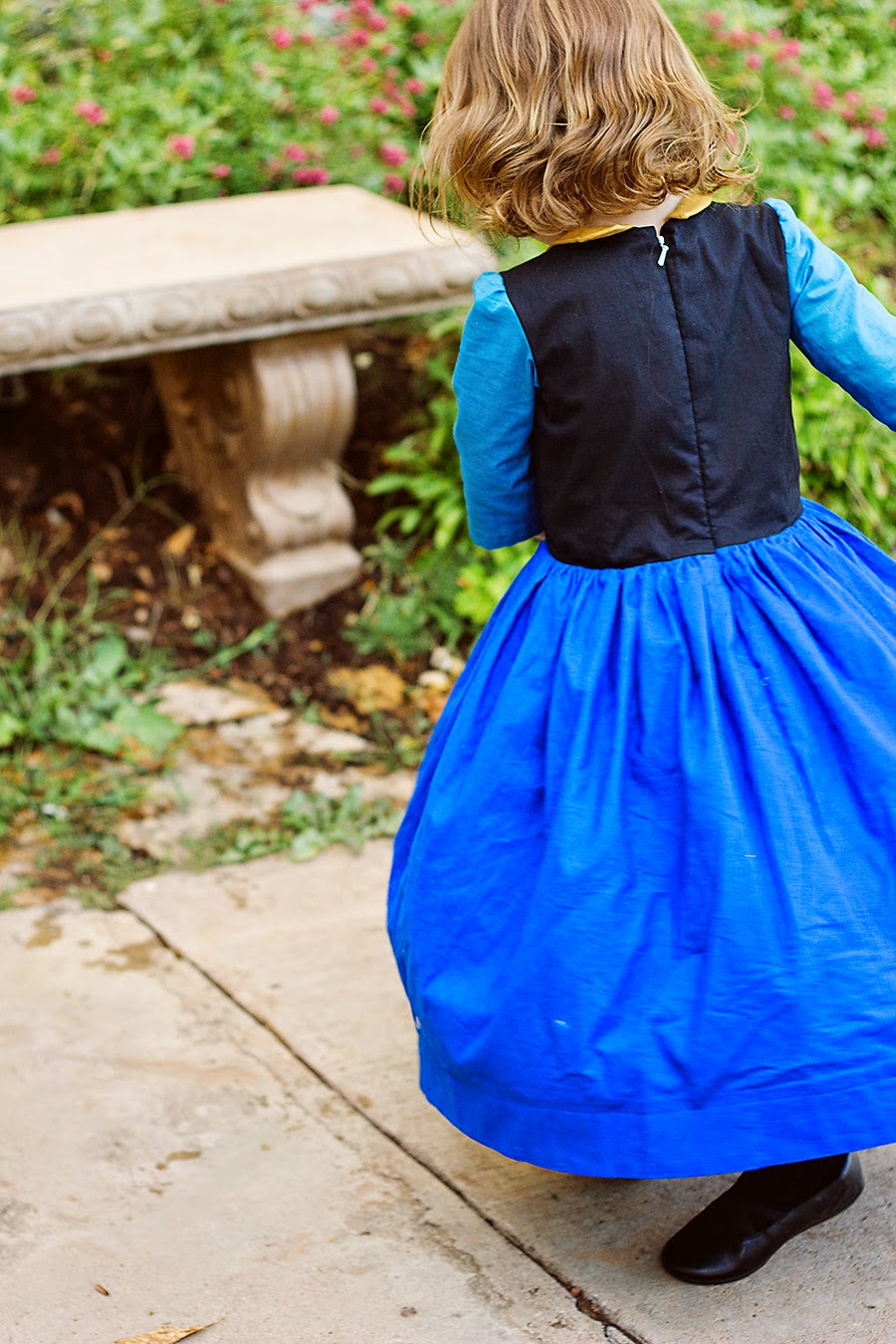 She loves it soooo much.  It was a little tricky because she didn't want to stand still once she realized it had a great twirl factor. 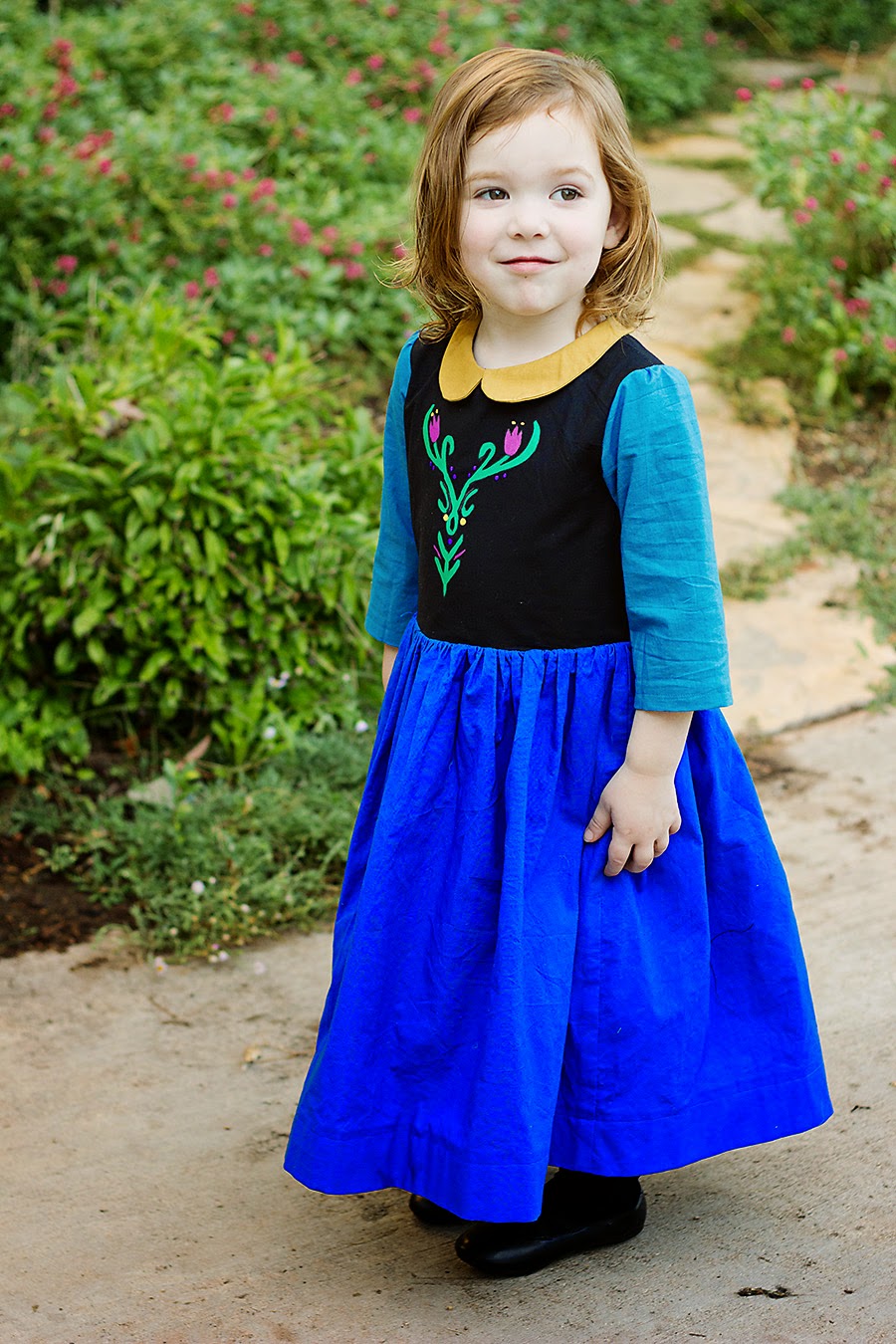 I tried a new brand of paint this time and am really hoping it holds up, I can see this one getting a lot of wear, they wore them for most of the afternoon though I made them take the dresses off to eat.  We have 4 Halloween parties starting Friday, hopefully nothing too bad happens to them before Halloween! 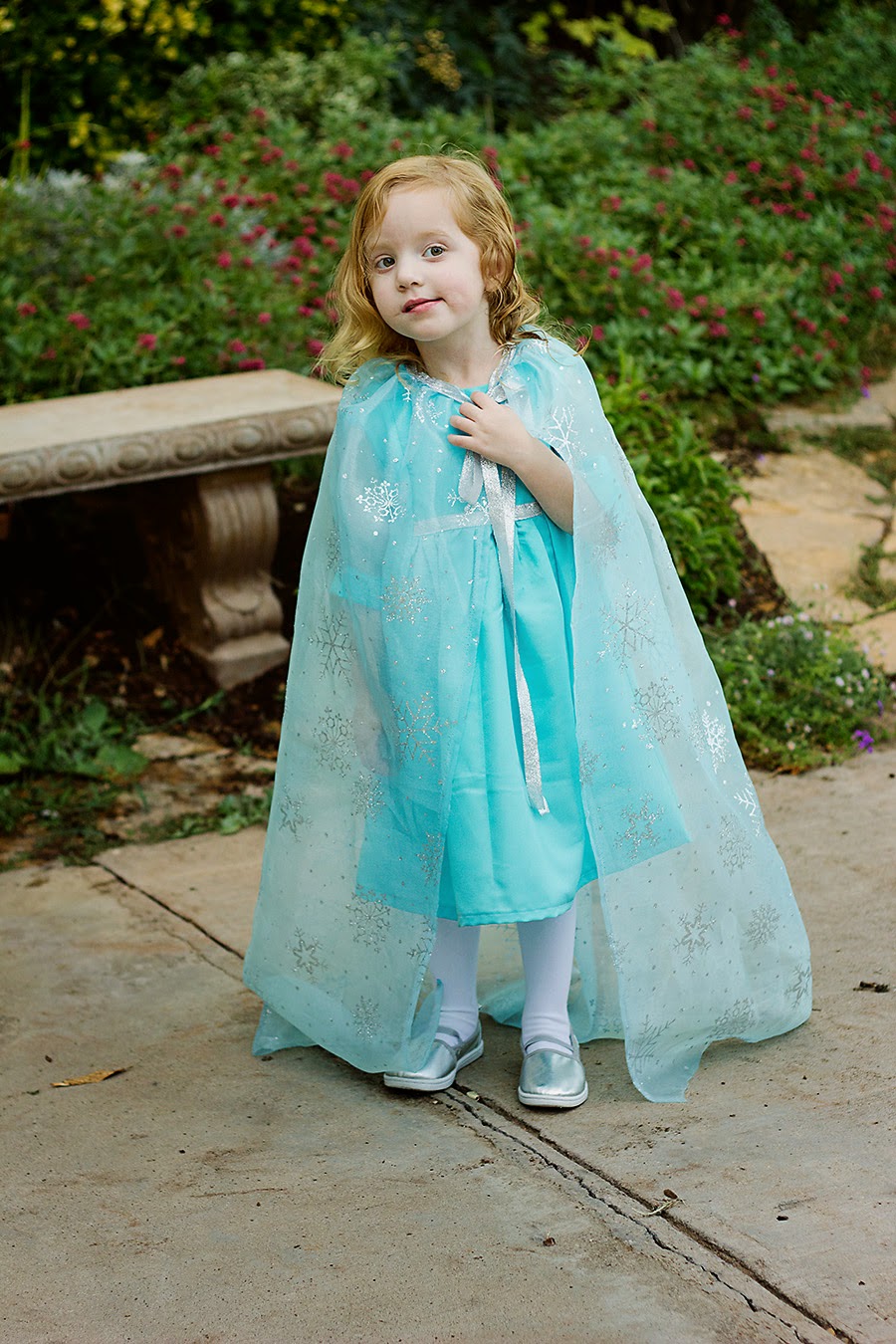 On to Elsa, though if you only say 'Elsa' to George she corrects you and says she's 'Elsa the snow queen'.

I was inspired by this one in the flickr group.

The cape is just a 1 yard piece of fabric sewn to a ribbon, heat sealed on the bottom with selvages left on to not need to seal them.

There is currently glitter all.over.my.house. 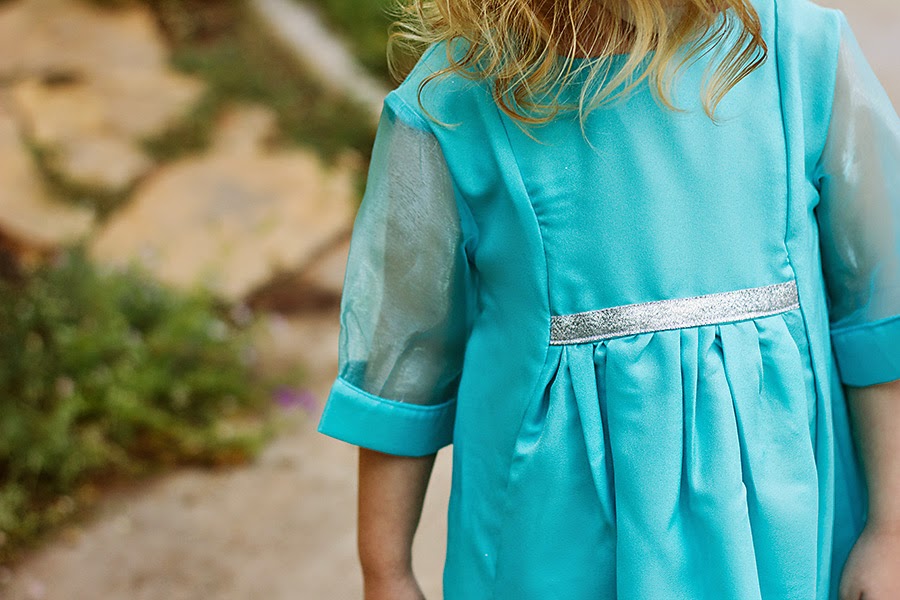 I did french seams throughout, though this fabric was a beast to press.  No matter the heat setting I couldn't get it to hold, not the best choice for french seams. 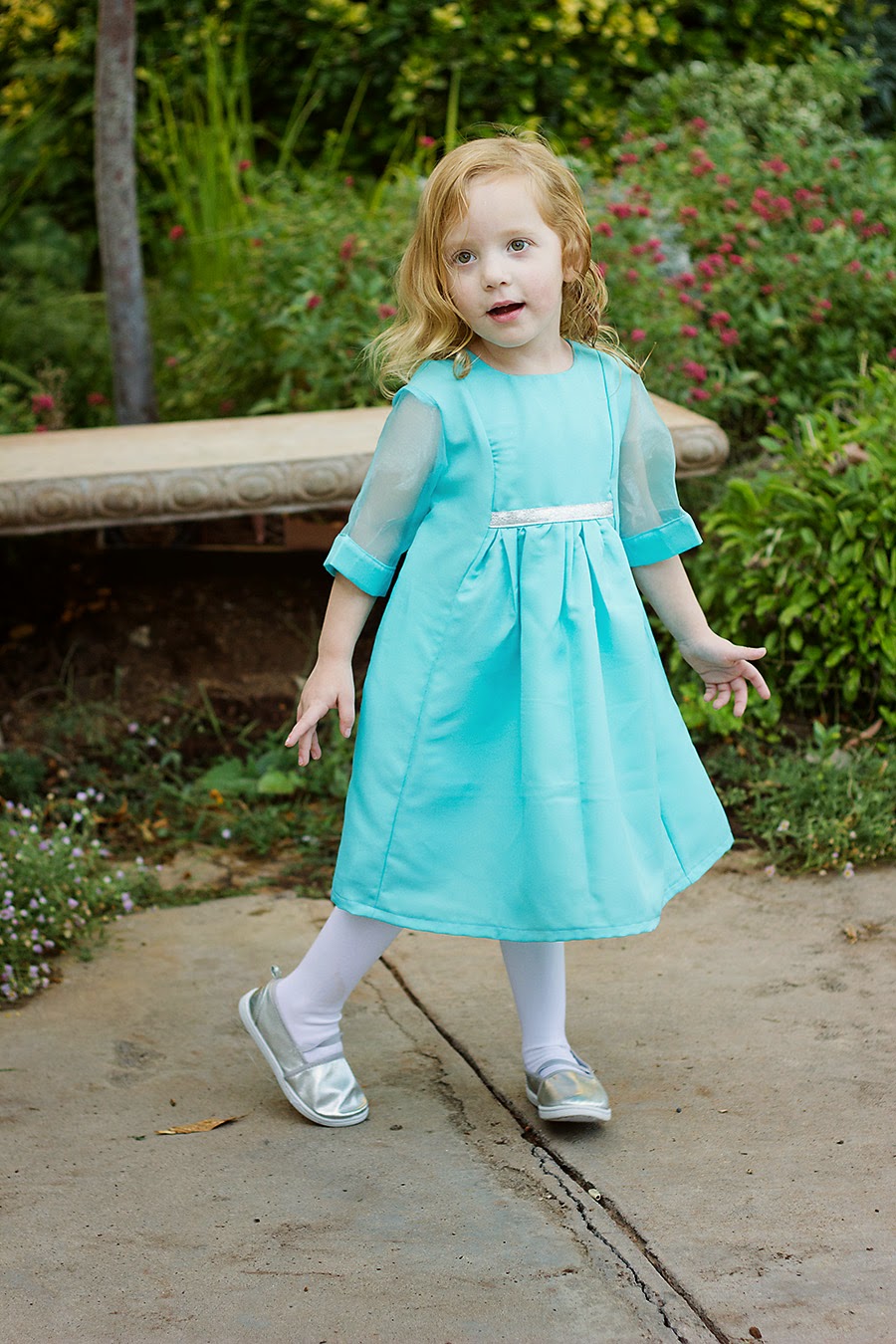 She is very happy with it and declared 'My dreams came true when you made me my Elsa the snow queen dress!'.  That makes it all worth it, right? 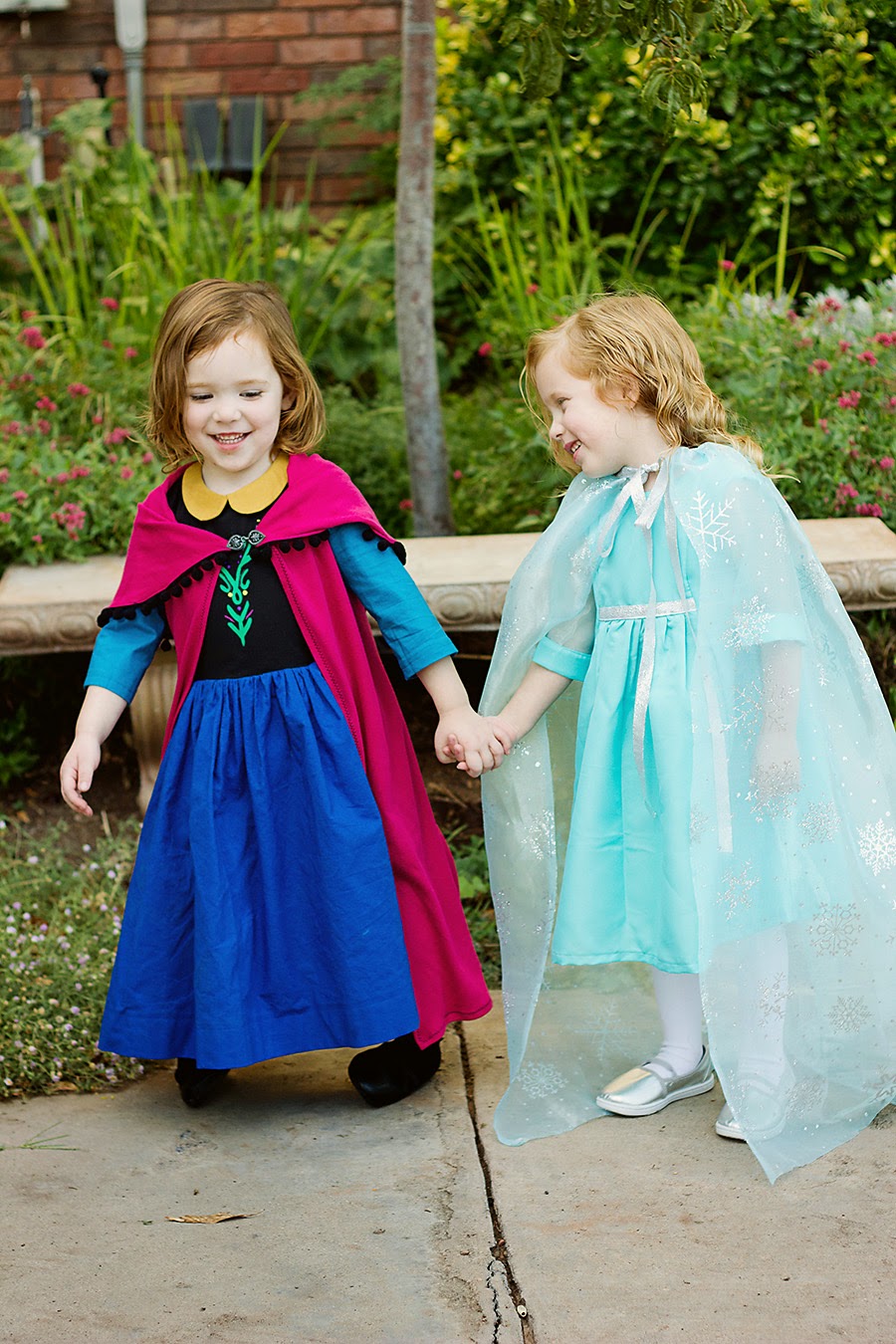 They spent the afternoon playing out scenes and singing all the songs, each only singing their characters lines, of course. 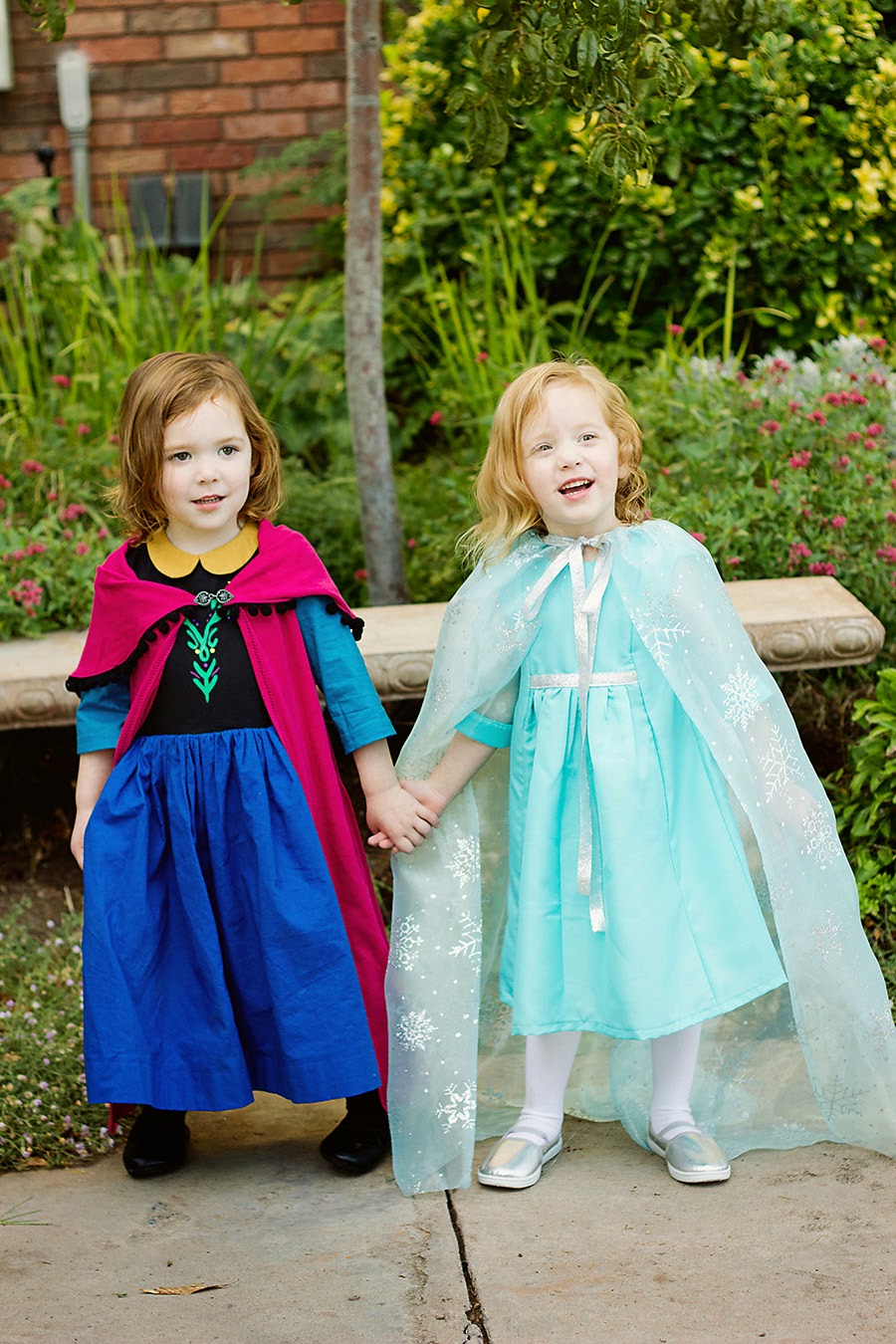 Are you ready for some football? 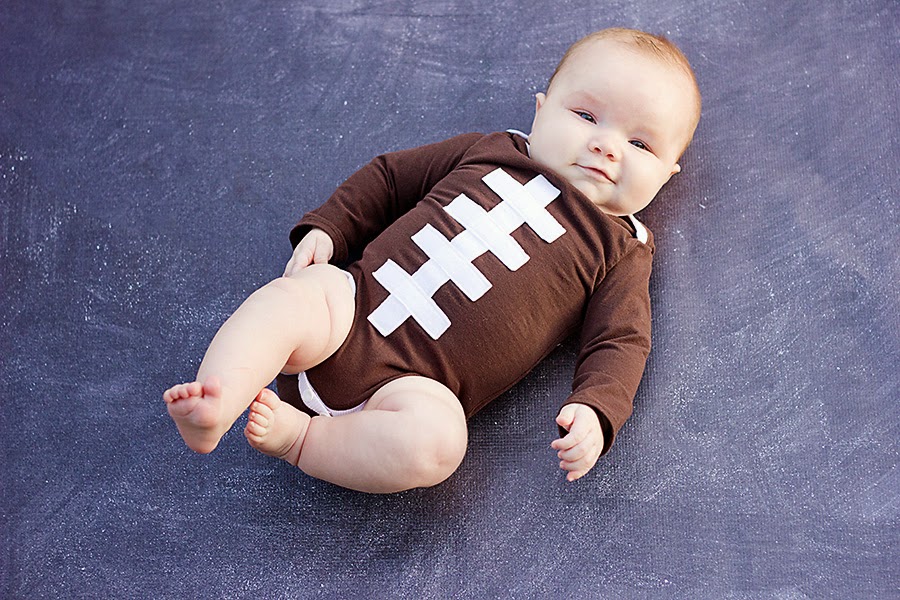 I have been meaning to make this for Sam for a few months now (oops!), and finally had the excuse to bump it to the top as it will be used under Sam's Halloween costume.  I am knee deep in Halloween this week, but there is an end in sight. We have an annual Halloween party this Friday, since I could see I wasn't going to make it in time I bought Jack's costume, much to his dismay.  He really wanted me to make it, but once he tried the RTW one on he was happy.

So, the onesie.  The pattern is the Peek-a-boo pattern Lullaby Line bodysuit with a bit of fleece applique.  I super over bought for his costume, so I used the fleece instead of a white knit, we'll see how it washes up.  I went based off his weight, which put him in the 9 month.  I thought that seemed really big being he is only just wearing 6 month RTW, but this fits pretty well which makes me wonder if it runs small.

I used some girlcharlee knit, I have had better luck with their solid knits than the printed, a lot of the prints seem to fade fast.  I still need to make him a pair of brown pants but my serger decided to act up and come unthreaded and no matter how hard I try or how many different ways I do it I can't seem to make it work.  I can rethread it, but once I try to sew it all goes down the crapper.  Sigh.

Next, I need to finish up the sleeve for Elizabeth's costume and make the cape, then I can finally clean my house, ha!
Posted by brittney at 9:51 AM 7 comments:

Do you ever avoid sewing things you "have" to sew?  I do, all.the.time.  It is a really bad habit.  I should be finishing this stack of skinny jeans or Halloween costumes but instead I made an outfit for Sam, that he doesn't even really fit in yet (both items are 6m).  Once I get an idea in my head I will obsess over it until I do it (unless I have to do it^^). 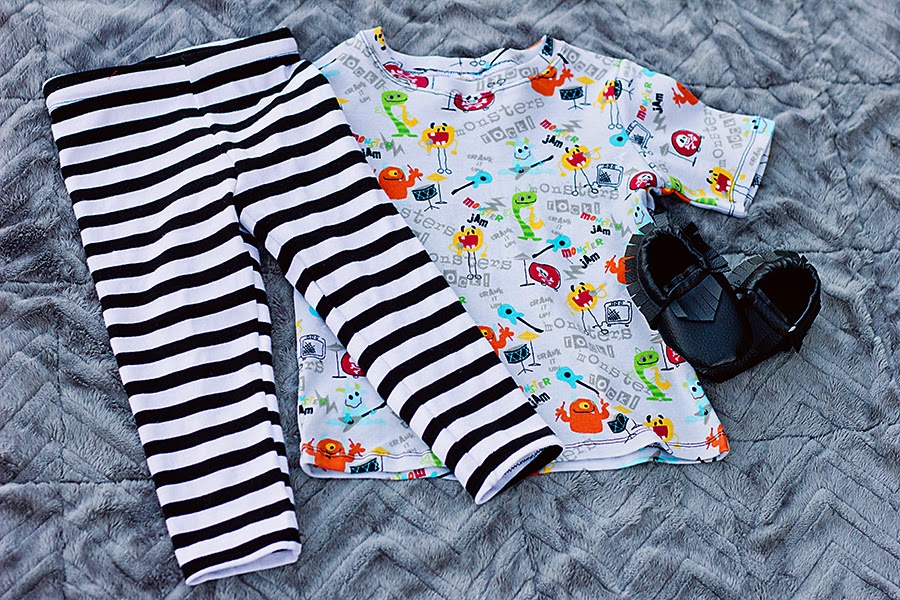 I see all over pinterest little boys in leggings, and I wanted to see how I felt about them on Sam so I made a pair of O+S Playtime leggings.  I decided to do a fabric that wasn't decidedly boy, so that if I hated the look I could pass them on to a little girl.  I don't *hate* them, but I am still undecided.  Let me back up, though, this all started when I wanted to figure out how to alter the Lil' Papoose Moccasins to look more like the super out of my budget moccasins that are popular now.  So I picked up some pleather to try out before I invest in some legit leather and played around until I got it, then I made a pair for my nephew too, who unlike Sam, actually wears shoes.  And if I went that far, why not make a shirt too?  I used the School bus Tee for that. 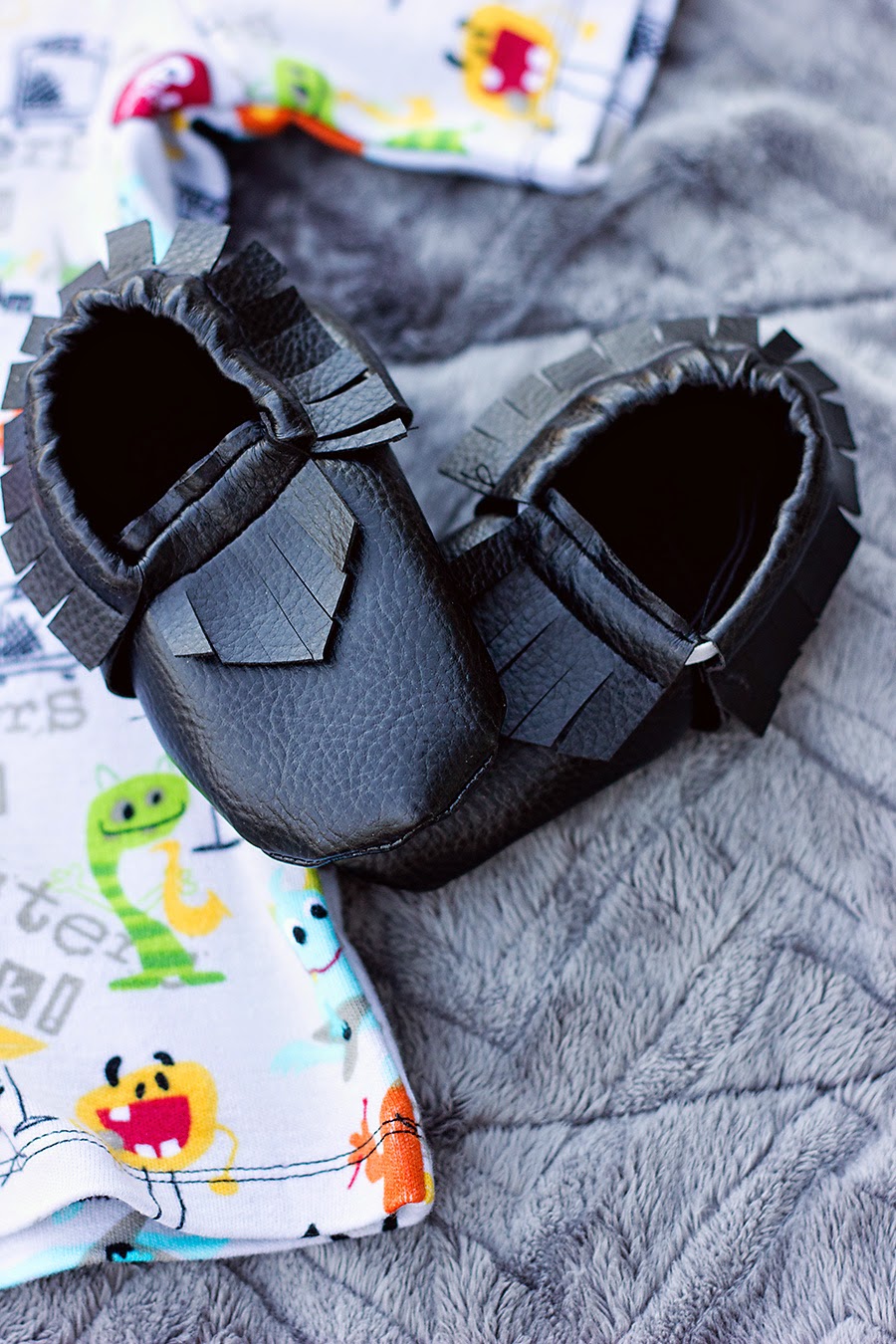 I never thought I would be one to make shoes, but I can see these becoming a new addiction, and a new go-to baby gift.  I made one 0-3 size first and it was a little tight, as was sort of expected being he is 3 months now and has fabulously chubby everything.  So then I made the 3-6 and there is plenty of room.  I know making shoes for someone who doesn't come close to needing them is a little ridiculous, but what is life without a little whimsy? 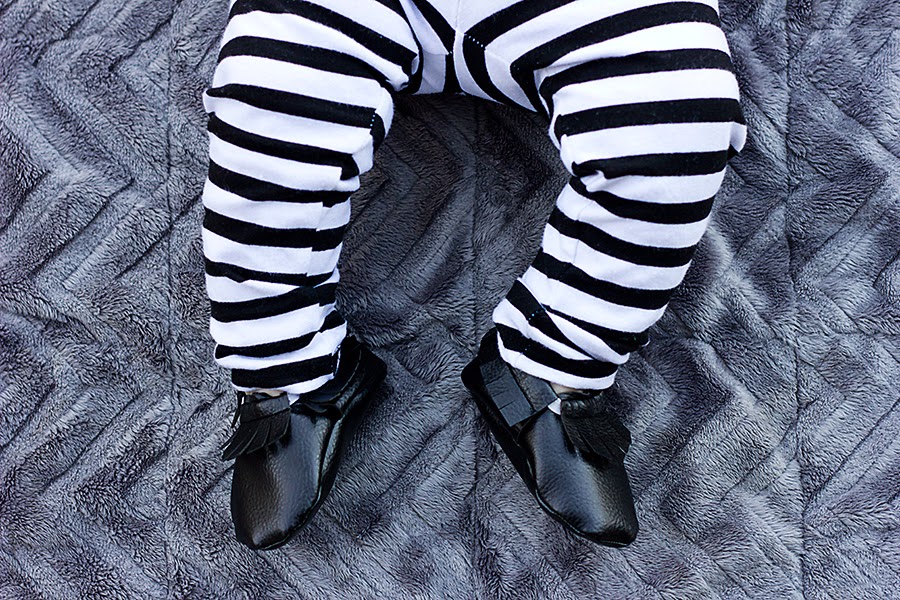 I made the leggings in a 12m width around the legs, but 6m in the waist thinking it would be a little looser, but again- super chubby everything.  They are growing on me. 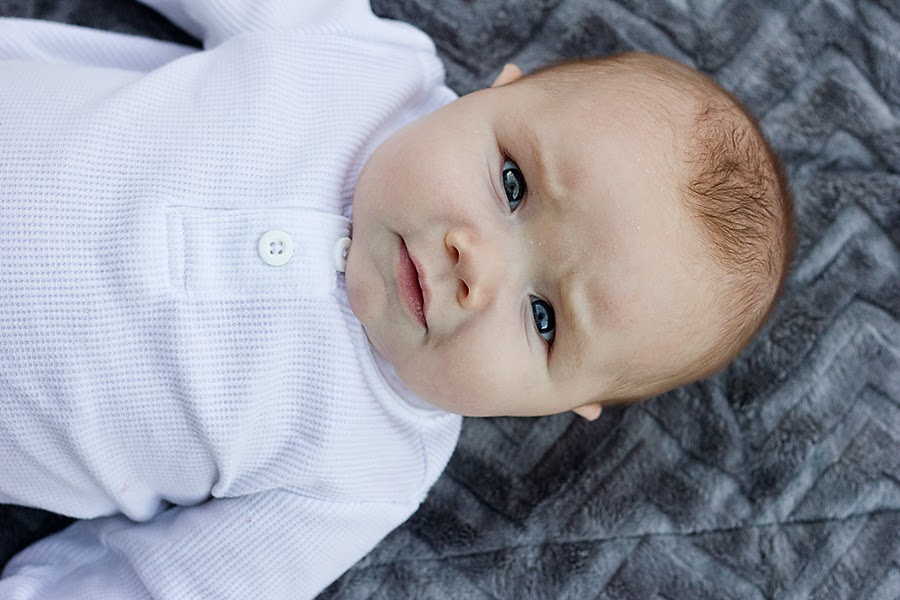 The shirt doesn't fit yet, but I figured it probably wouldn't.  I need to stop my brain from wanting to make 2 or 3 more right this minute.  But this little grumpy guy is helping me stay away from the machine too much.  He goes through spurts, a few days he will be so happy and can be left in the swing or on a blanket and other days he needs to be constantly held.  Sigh, guess I should finish my "have to" pile the next time he has a good day.
Posted by brittney at 8:11 PM 5 comments:

I had a baby shower to attend this weekend, so a tiny outfit was begging to be sewn.  Don't mention that I knew about this shower for close to a month and was literally finishing up 30 minutes before it started, that's just how I  roll.

I don't know her very well, but her mother was Ben's aunt for a little while and her brother is Ben's best friend, so I for sure wanted to make her something.  But without knowing her style it was kind of hard to choose, in the end I went with a classic little boy look and something I would dress my boys in.  In fact, I almost wanted to keep it for Sam, ha! 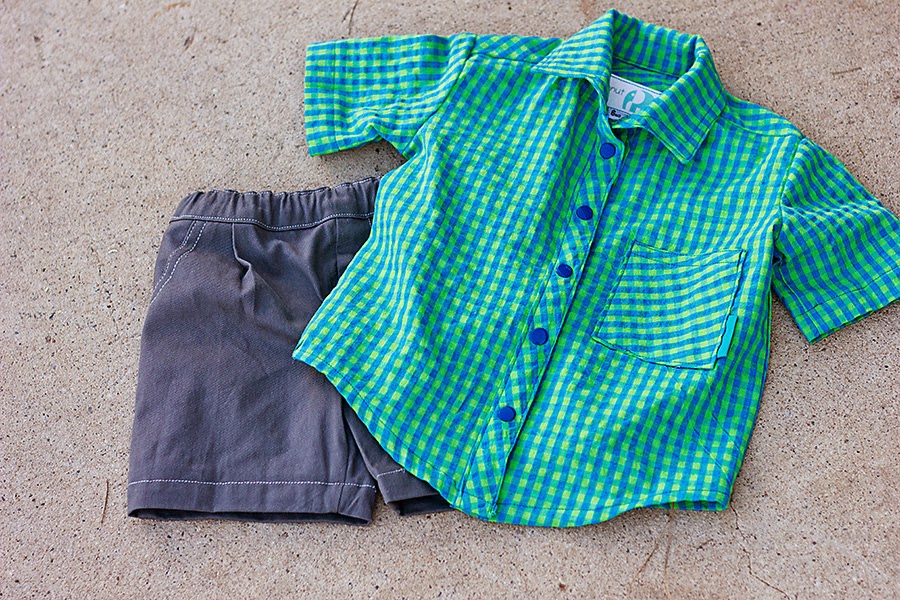 I made the Oliver + S Sketchbook Shirt + Shorts in a gray bottom weight (denim, I think...) and a plaid seersucker-ish material.  I pretty much ironed the crap out of the shirt so it lost it's seersucker look and I didn't have time to throw it in the wash like I normally would before giving it away (I usually like to wash baby items in dreft so they are ready to wear), but I thought the material would work well since it didn't necessarily need to be ironed, most new moms probably don't want a gift that needs to be ironed, right? I love the fun and subtle details in boys clothing.   I cut the placket and pocket on the bias, added a bit of bias tape to the pocket and snaps- because snaps on baby clothing are the bomb diggity.  So much easier than buttons when they want to be wiggly.

I loved making this shirt.  The yoke construction at first left me scratching my head, but once I figured it out I felt like a rock star! I can't wait to make this one again. 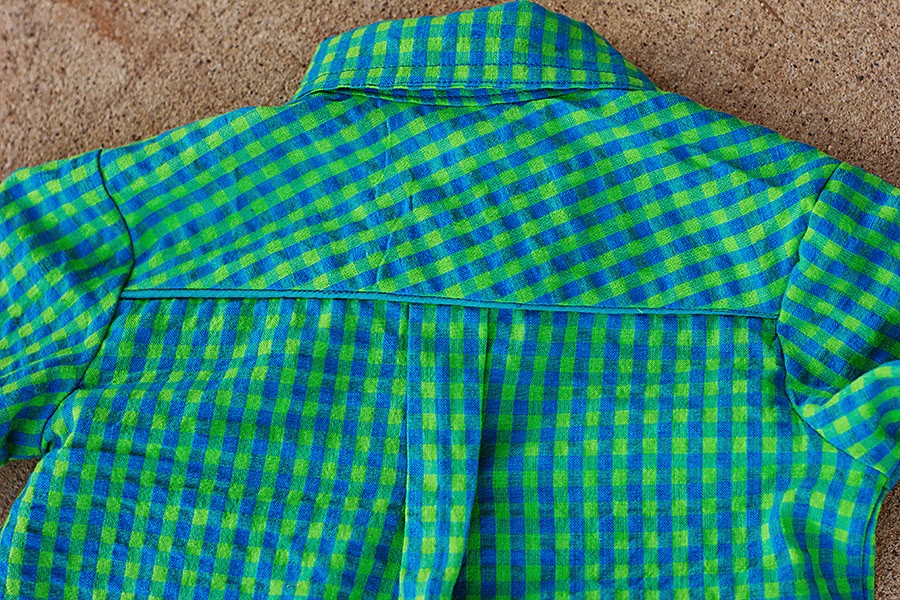 Ugh, my iron job sucked and I was trying to sneak a few pics in as quickly as possible.

I tried out my piping foot that I have had for forever, I probably shouldn't have used it on a gift for my first go.  The right side is a little too narrow. 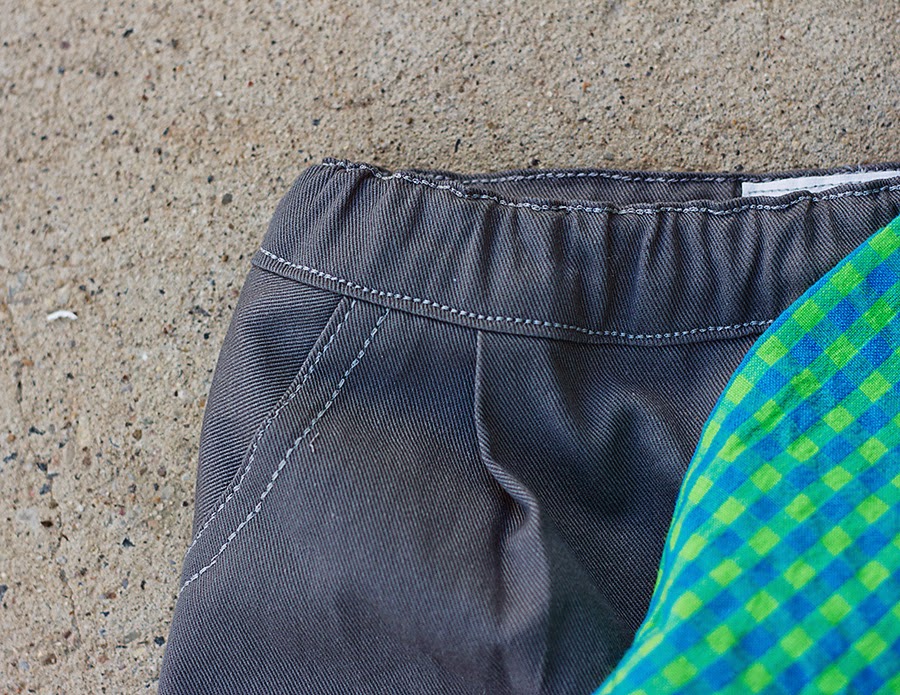 I didn't have a matching gray thread, just lighter or darker, so we are going to pretend it was a design feature rather than my procrastination and laziness that led to this look.  I used my stretch stitch to get a more defined look since I hate topstitching thread but love the look.

Hopefully she liked it!  I had to leave before the gift opening as Sam was fussy.  And now I can't wait for Sam to fit the 6 month range!!
Posted by brittney at 11:13 PM 3 comments: