A gift for a baby.

This gift has been waiting to be made for a long time now, the baby shower was in March, but we were preparing to head to a beach house when I got the invite and were to be gone when the shower was held.  But, the gal's mom is so sweet and always gets my babies something I knew I would be making something for the baby no matter how long it took me.  And hey, her due date is in the next week or so, and the baby isn't here yet so I am calling it a win. 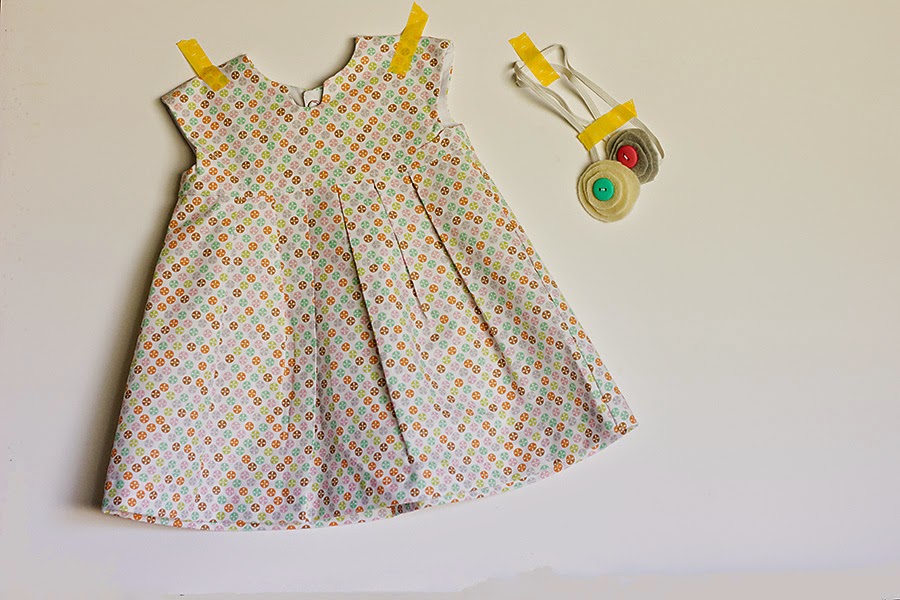 I was originally going to do something definitely vintage (think Puppet Show) as that seems to be the mom's style, but getting up and down a million times gives me contractions, so I went with something quick and easy.  Being I have made it now nine times (!!!) I knew what steps came next and was able to keep the getting up and down to a minimum.

Oh, so what is this pattern (as if you haven't seen it a million times all over blogland)?  It's the Geranium dress that I was lucky enough to test way back when it came out.  I have never made one this little though, it's so cute and small!  Eeep!  If I was having a girl she would have a closet full of these.

I also threw in a few headbands.  The mom and I talked a little bit about headbands and she is not in to the giant bows on tiny babies (neither am I, really) so hopefully these aren't too big. 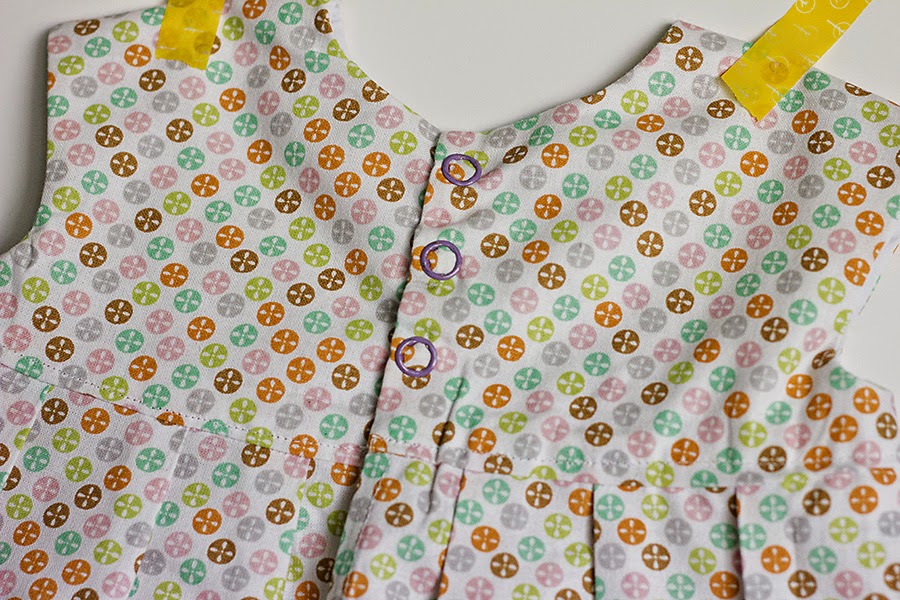 Snaps are for sure the way to go on little ones, heck, even toddlers!  ... Actually, Abby loves snaps too!  I used some purple ones from the stash.

Um, apparently I need to iron a little better before photographing/giving it away. 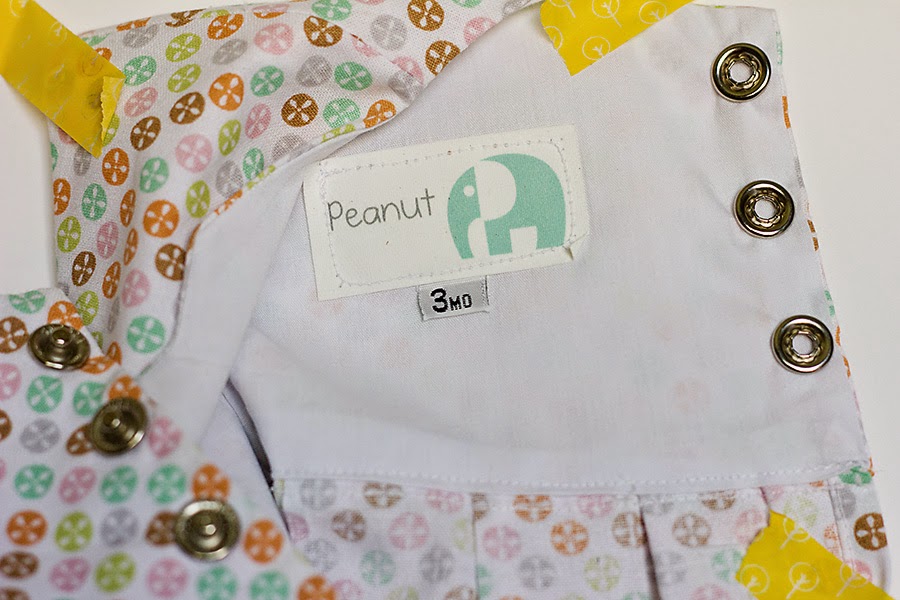 And I finally invested in some labels!   I have always used the size tags and my MIL bought me some labels a long, long time ago but I used all of them and had just been using ribbon which worked, but now I am totally legit;)

When we were thinking of names for the twins, Ben decided he wanted one of them to be called Georgia after a character on "Dead like me" and her nickname was peanut.  I had a hard time thinking of what I wanted on a tag and that is why it took me so long, but I am glad I finally took the plunge!  Now to find more time and energy to sew... ha!
Posted by brittney at 5:35 PM 5 comments:

Email ThisBlogThis!Share to TwitterShare to FacebookShare to Pinterest
Labels: for others, geranium dress, made-by-rae

Dear Old Navy + Target, see through maternity shirts aren't cool.  I officially now hate you both for the amount of times I have bought a shirt, torn off the tags and realized it was see through (I think I am up to four).  Guess that's what I get for not trying things on in the store.

So, I bought the Megan Nielsen Ruched Maternity Tee waaay back when I found out I was knocked up, I think I was like 6 weeks when I hunted down the one and only paper pattern I could find online.  Guess what?  It's now available in PDF form!  Which would have helped (not only the pocket book) because I misplaced my pattern for like ever.  (Sorry Sarah, I really did mean to send it along to you! I still can if you still want it...)

I made one early in my second tri but thought I could just ignore the seam allowance suggestion, 5/8" for knit is so weird to me!  So I went down a size and went with 1/4" seam allowances.   It worked out alright, but I figured I should probably follow the pattern if I wanted the best fit. 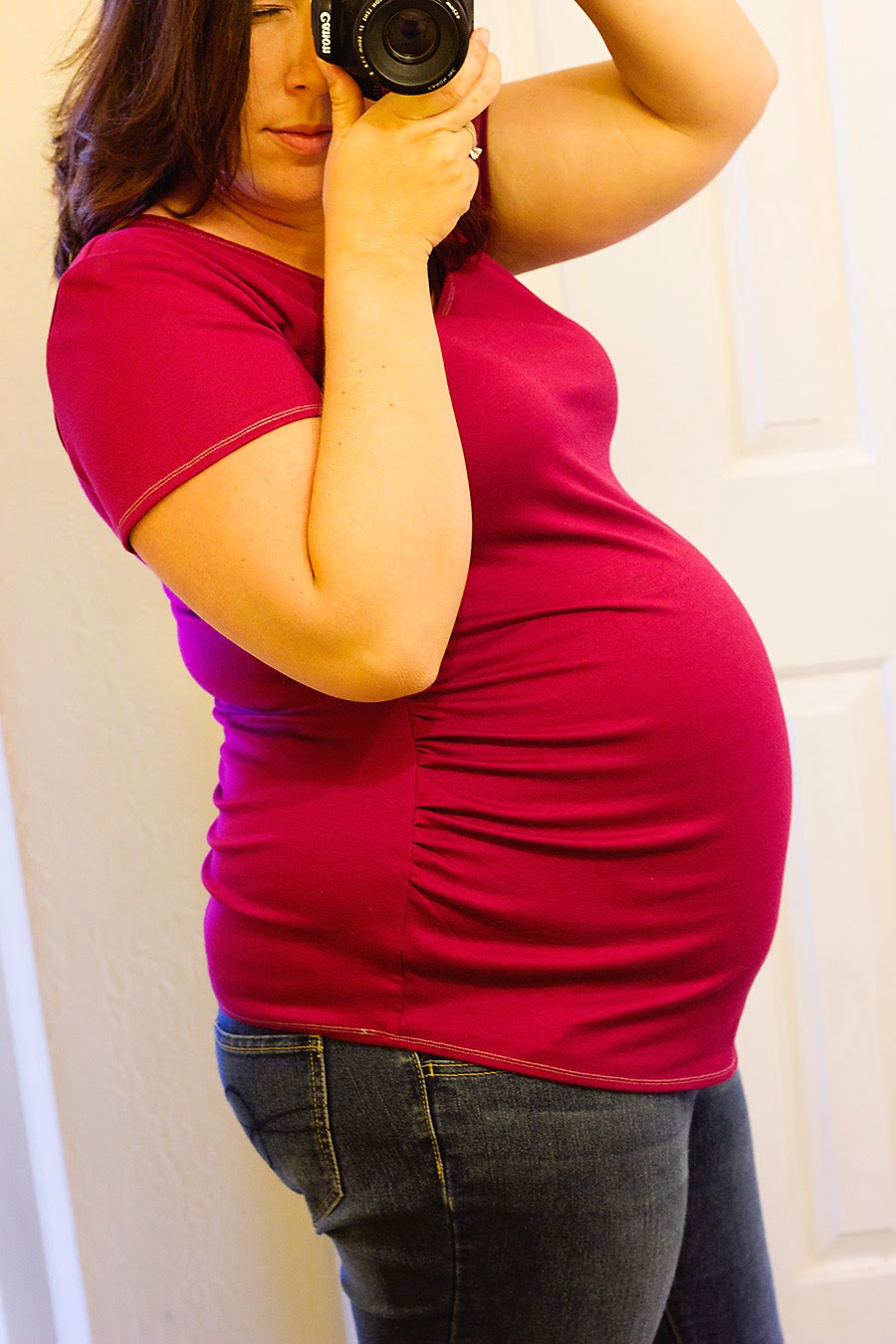 Based off my first one, I added some length  to the front and back, but I think I could have done even more, I don't like my shirts being too short, especially when they could expose belly.


I used this ponte de roma knit from girlcharlee. 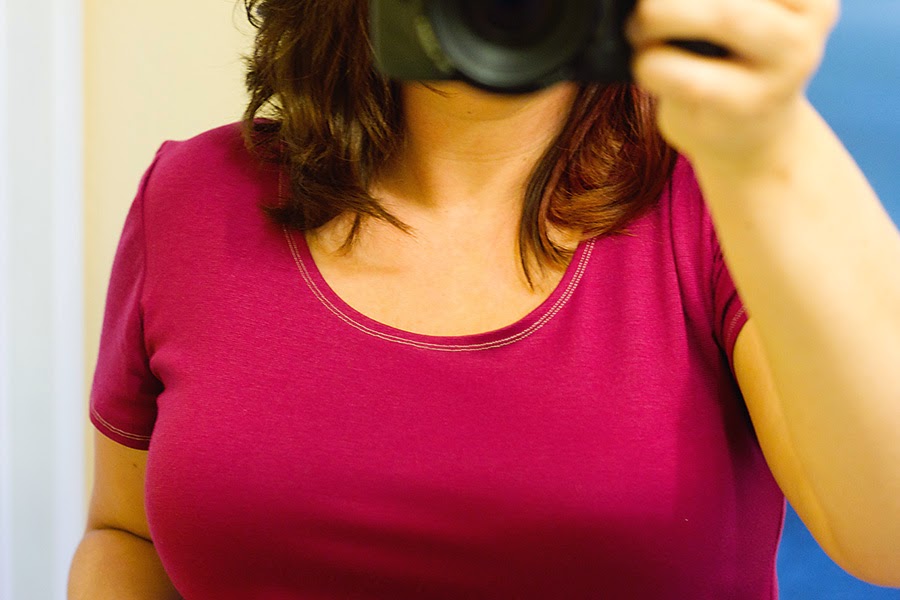 I didn't have any thread that matched and being in the middle of potty training the twins (kill me now) I wasn't going to the store for any.  I used gray, though it looks a little whiter to me in the pictures.  Again, based off my first go at the tee I raised the neckline in the front because it dipped a little too low for my liking.


I am going to try to sneak a few more of these in this week, my wardrobe is kind of lacking in the maternity department being I gave away all mine after the twins.  I probably should have made them earlier to get more wear, oh well!

Email ThisBlogThis!Share to TwitterShare to FacebookShare to Pinterest
Labels: for me, maternity, megan nielsen

Confession:  These Roller Skate Dresses have been cut out since the last Kid's Clothes week.  That makes it  what, 3 months in the UFO pile?  I was beginning to worry I hadn't added enough length being they have both really shot up the last few weeks. 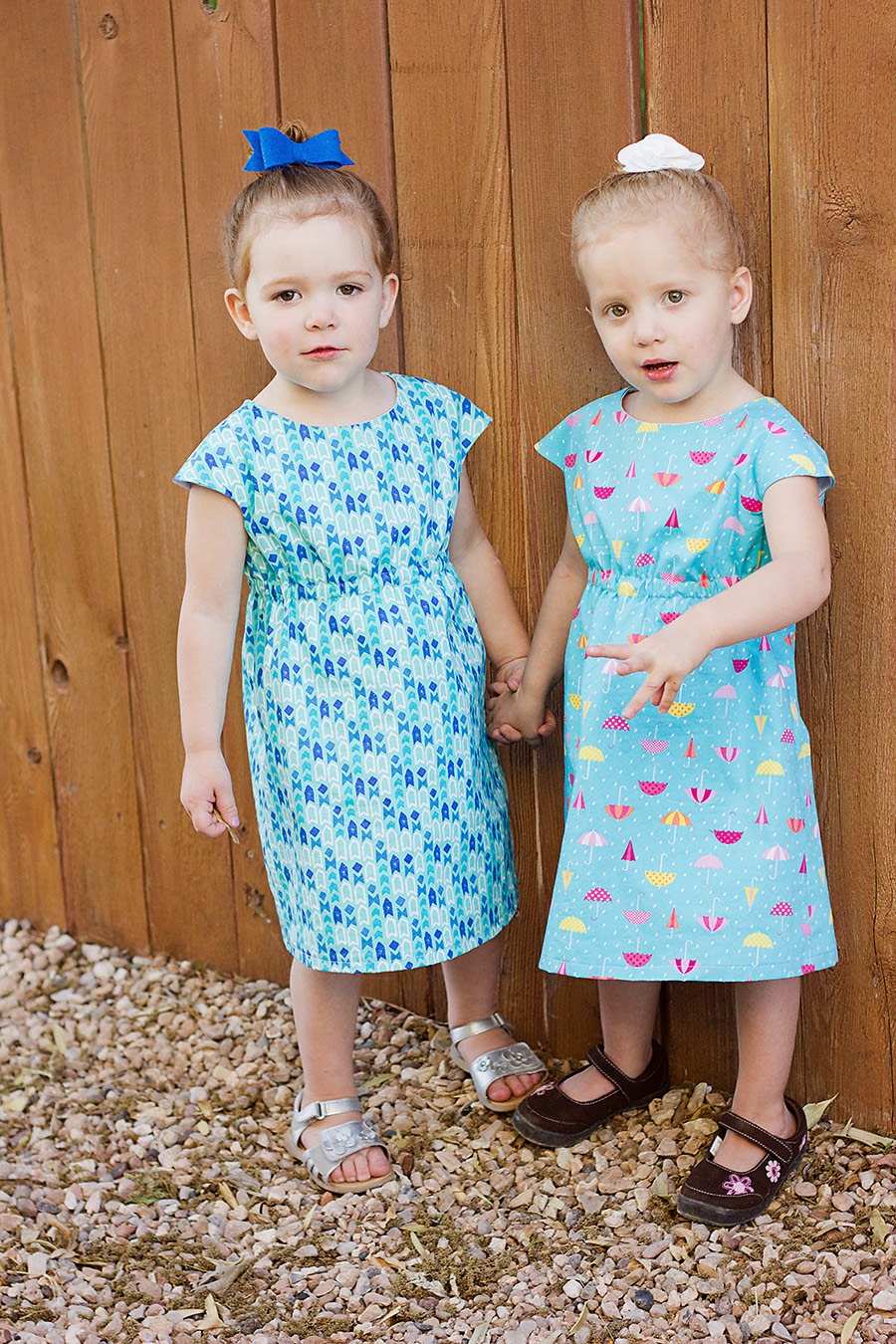 But never fear my dears!  They turned out just fine.  I made a size 2T with the length of a 3T and elastic placement of a 3T.  I remember these being a little generous fitting on the twins (I have made these plenty of times already) so I sized down from what I usually make in O+S. 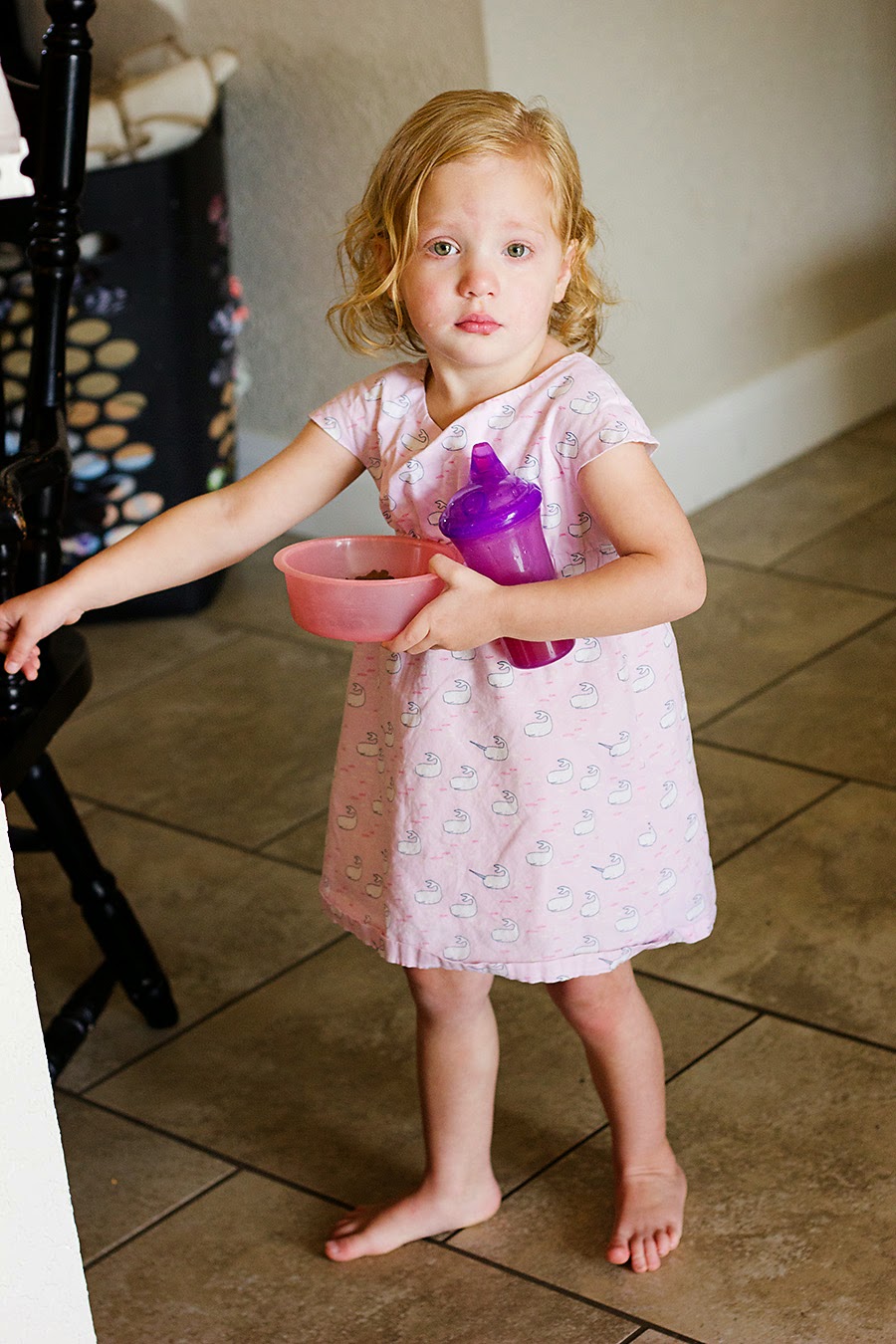 In fact, they are still wearing their 18 month Roller Skates, originally shown here,
(Sad face due to the fact I wanted to take a picture of her rather than sit in my sewing chair) 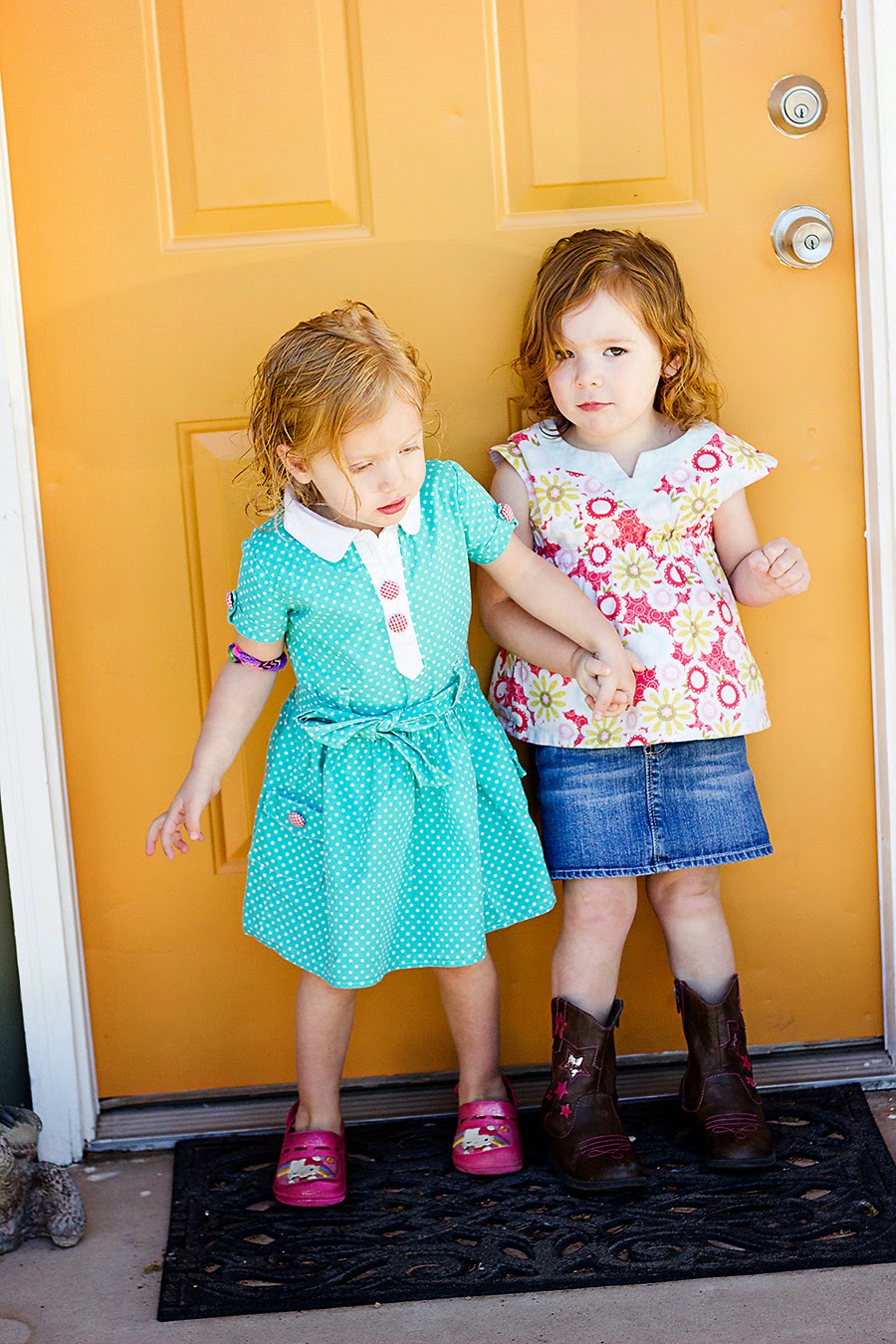 and this one here.  Also George is wearing an 18 month Jump Rope Dress seen here originally.  It still fits well once it is on (the JRD) but it is a little tricky getting her arms in, but she loves it, missing button and all. 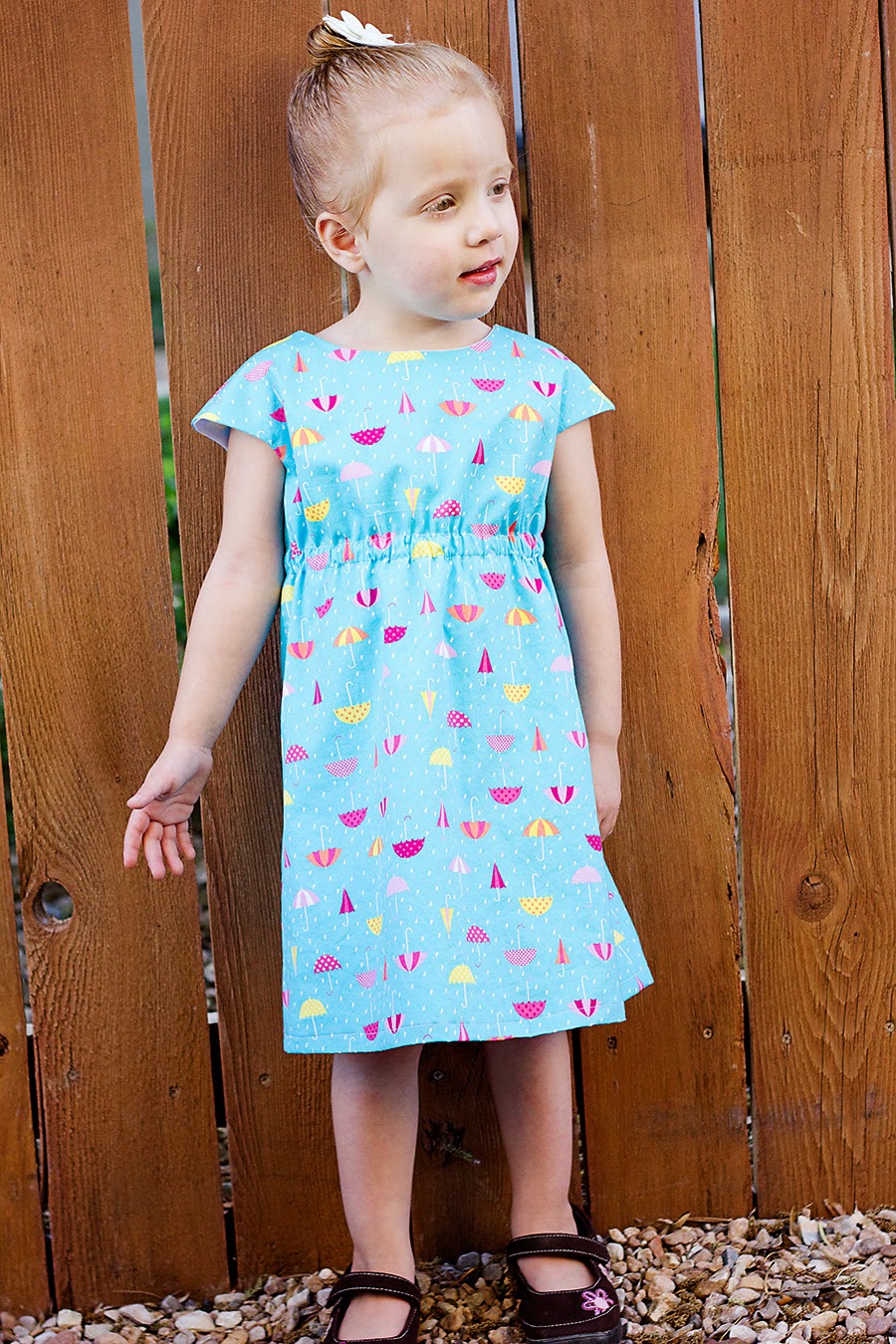 Little Miss George claimed the umbrellas straight away, and there was a little bit of a fight over who would get to wear it, but eventually small one won. 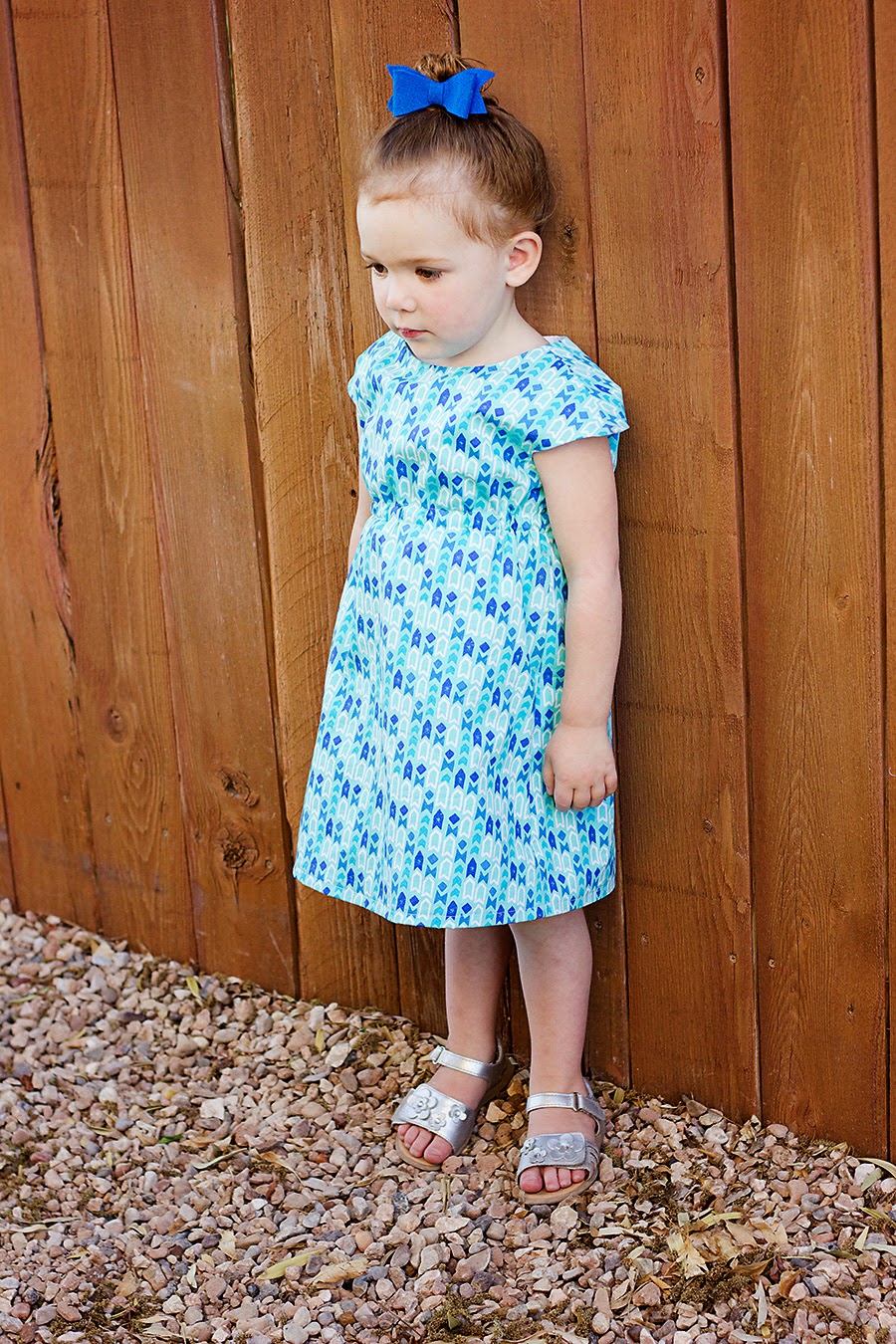 Iz is still digging the "don't look at the camera no matter what" game.  Nice.

I am glad I finally sat down and made these, I do love the prints and they are perfect for spring/summer.
Posted by brittney at 8:14 PM 3 comments:

I got lucky today, not only was I in the mood to sew, but the house wasn't completely wrecked to the point I would feel guilty sewing and Jack decided it would be fun to play with the twins after school and before nap time- that doesn't happen often.

So after yesterday's bodysuit I knew I wanted more, like lots more.  If you haven't noticed, once I find a pattern I love I become a bit obsessive.  Just getting my money's worth, right? 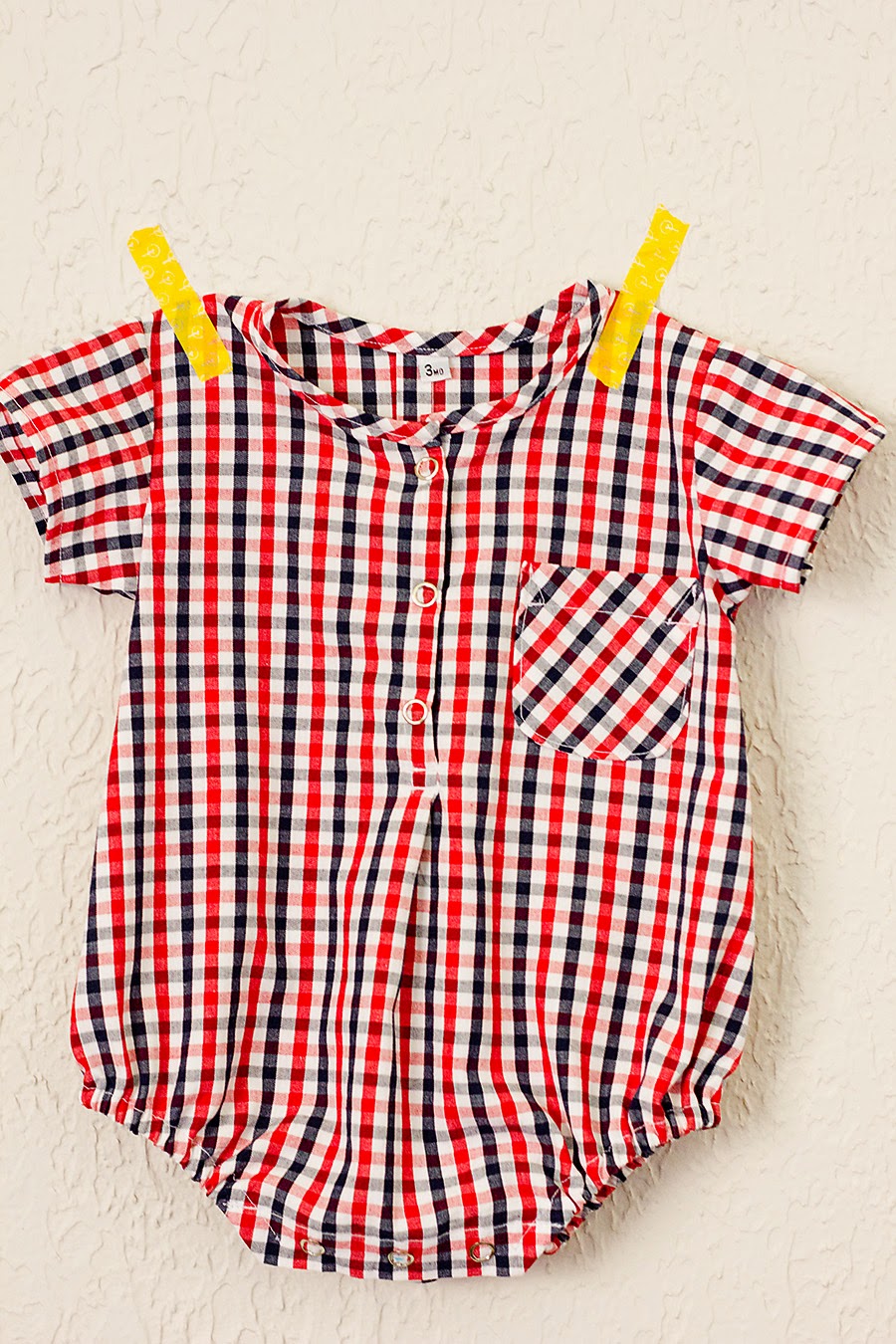 So I remembered I had this really soft plaid that I thought last year I would make some shorts for Jack with, but I was afraid how they would hold up for my rowdy five year old, perfect for this project!

I again made the bodysuit from the Lullaby Layette Set, this time in a 3 month size.  The one yesterday is the only newborn or 0-3 month thing I will be making (unless the knit onesies I already have cut are 0-3... I can't remember!), like I said before, I make 'em big, maybe I will be pleasantly surprised with a small babe but I doubt it. 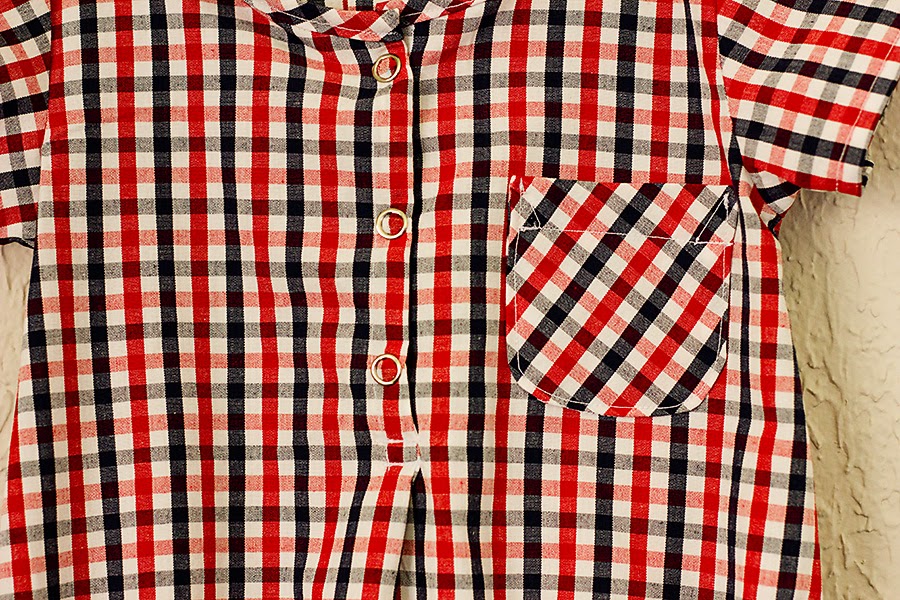 For fun I thought I would add a pocket cut on the bias.  I used the pocket included in the pattern intended for the pants, I made the size 0-3 month pocket as I didn't want it too big.  Ben always jokes about the reason for infant clothing with pockets, but I think it is totally cute. 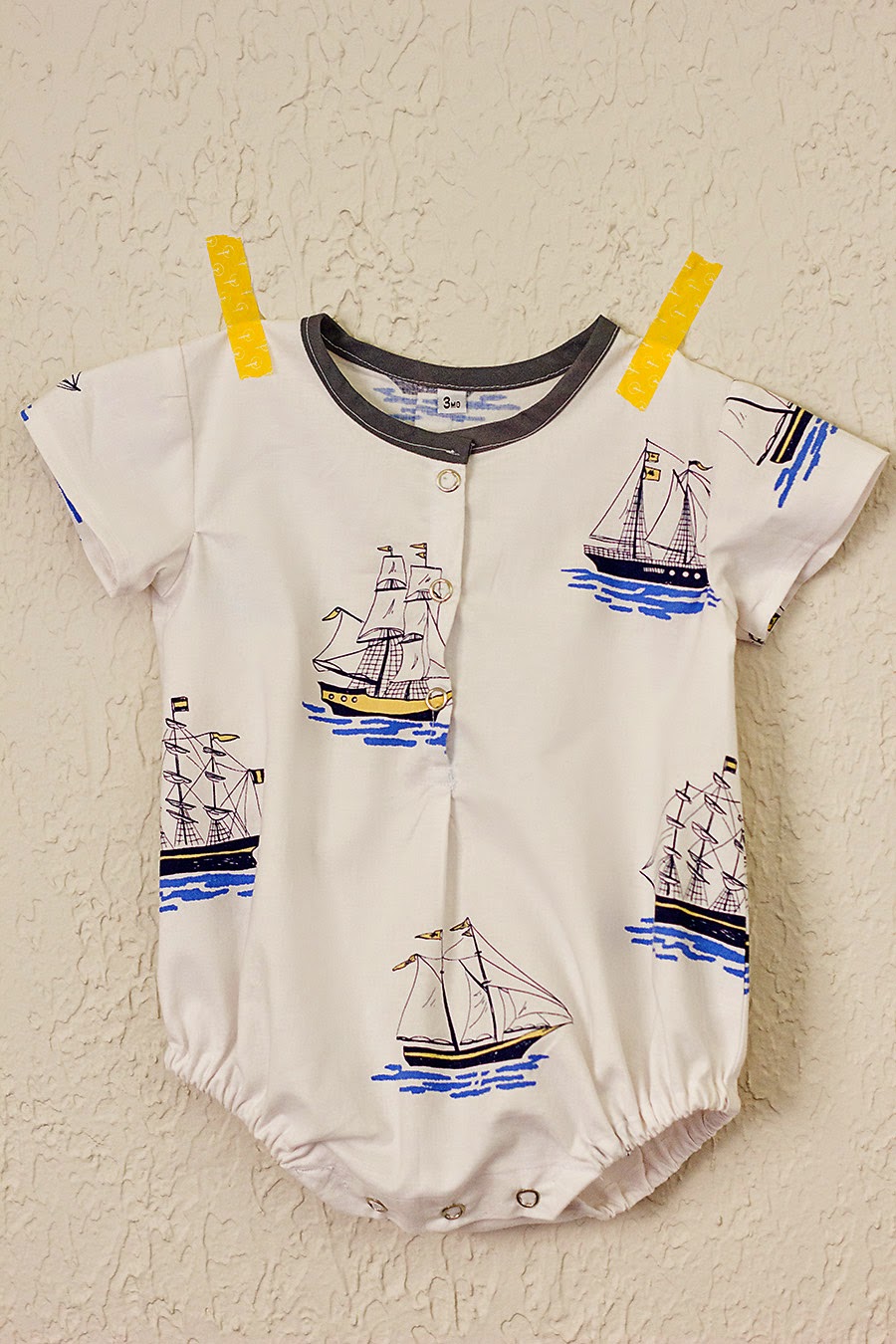 I have been holding on to this print for far too long because I was unsure what to use it for.  Still, I am undecided, but what's done is done. 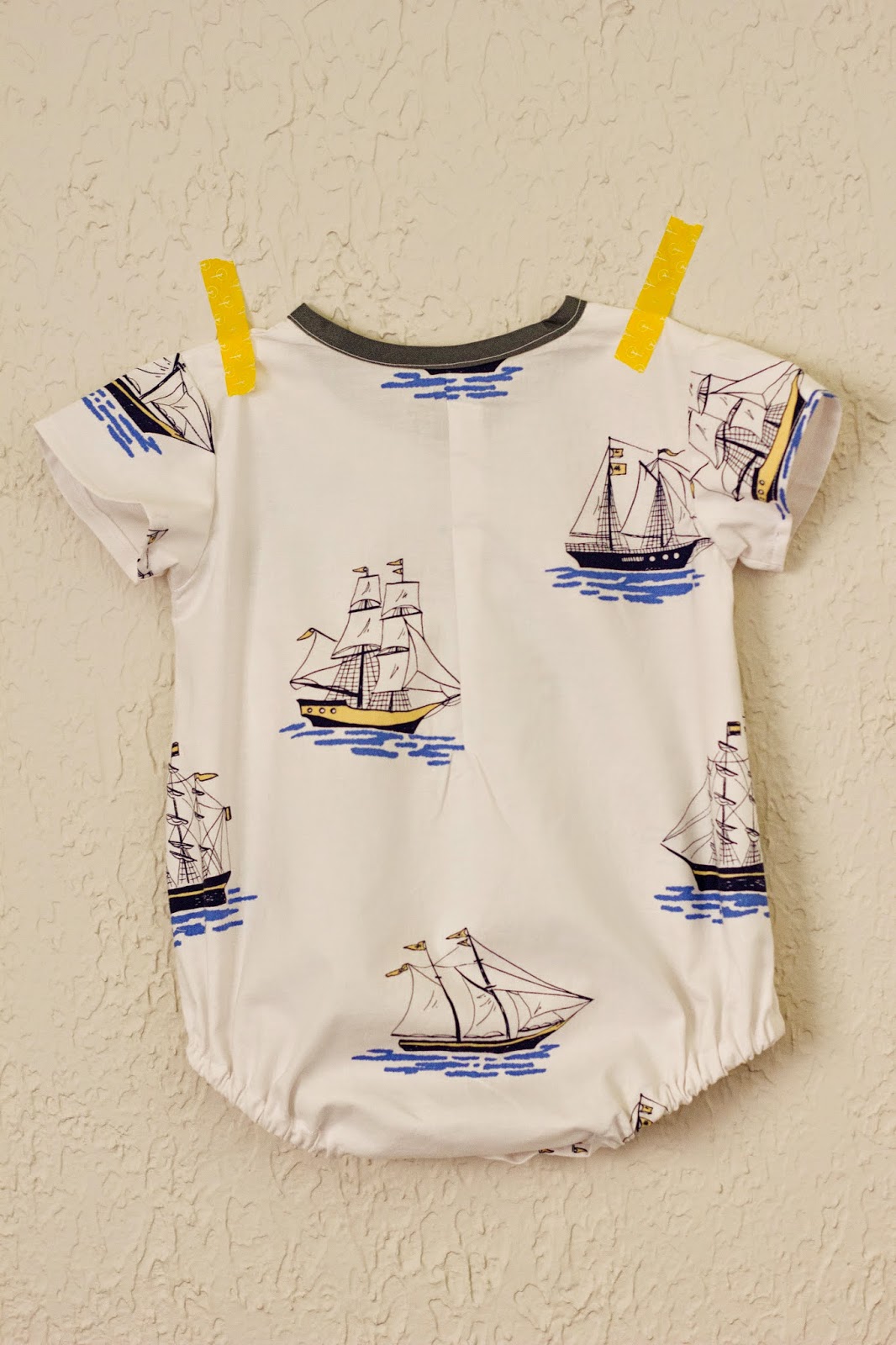 I used the yardage the other day to take my nephew's monthly progression pictures and last night it clicked that this would probably work.  I remembered the ships being a little closer together, but I went with it anyways.

I wasn't quite sure how to place the ships, especially on the sleeves. 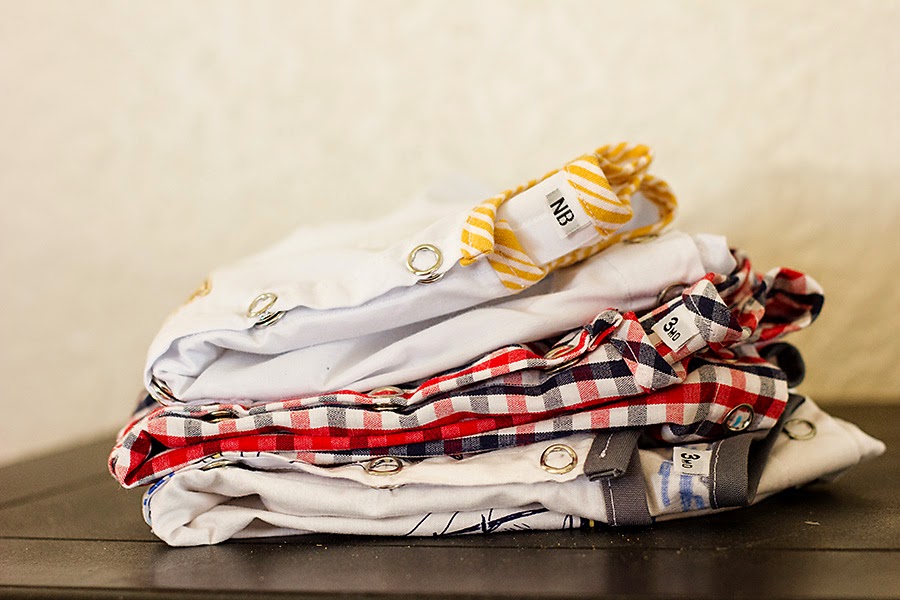 Not too bad for a few days of sewing, though I think it may be time to switch to another pattern before I end up with ten of these, ha!
Posted by brittney at 5:21 PM 12 comments:

This has been cut out for a week now, and the applique done for the last few days, but I haven't had the time nor felt up to sewing (oh the horror!).  But I got the itch today, finally. 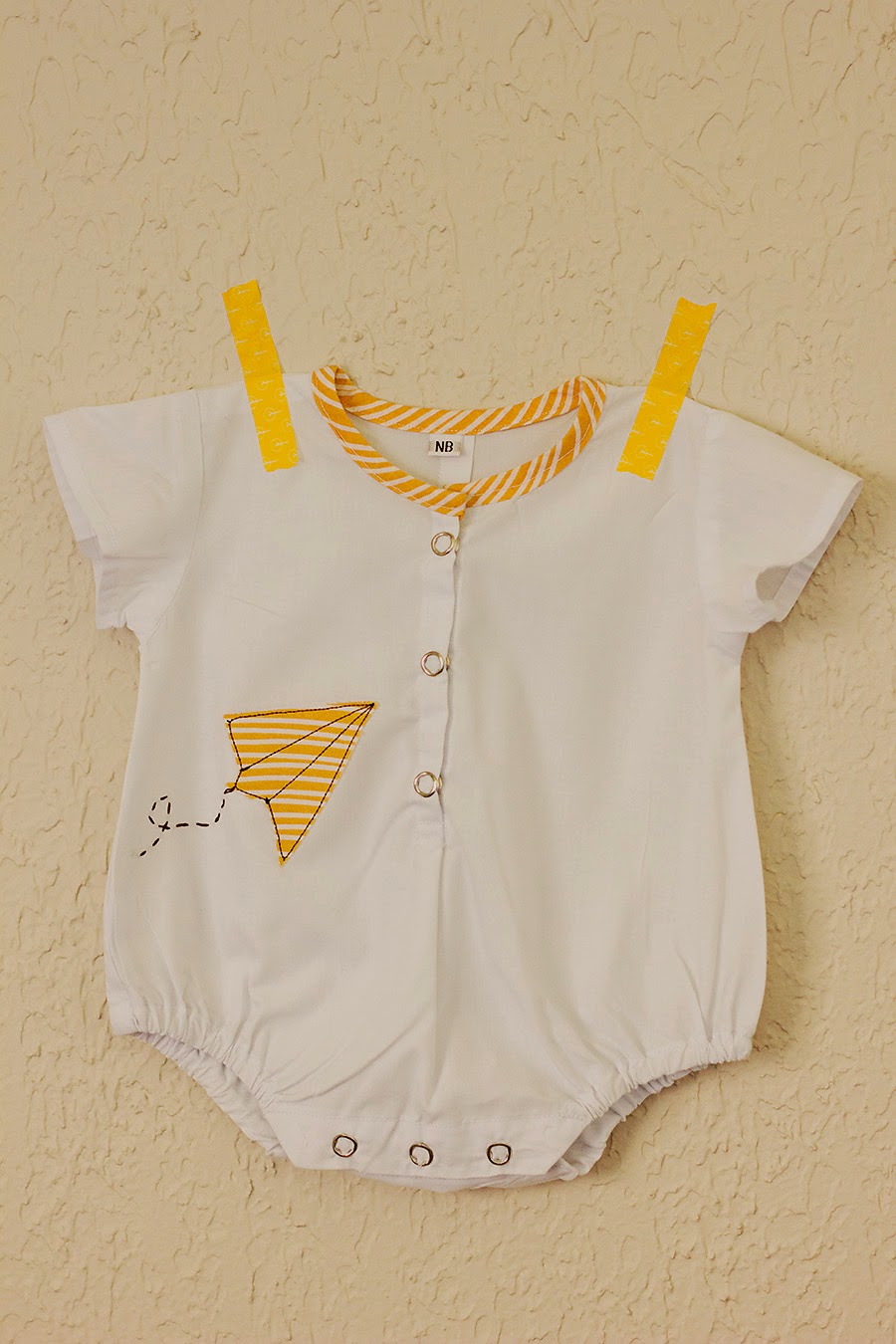 This is from the Lullaby Layette Set by the always amazeballs Oliver + S.  It was amazing timing, this set coming out, like it was meant to be!  I was so happy when I learned that just in time for me to sew for my new little bub Liesl would be releasing a baby line, I really wish some of her boy patterns were smaller than 6m like a few of the girl ones.

This is the 0-3m size, though I didn't have that tag so I used a newborn one instead.  As with all O+S the instructions are perfect and everything comes together with ease.  I can see many more of these in my future, so long as my mojo comes back.

P.S. hemming the sleeves on this size was a beast, make sure you follow her instructions to a T for this part! 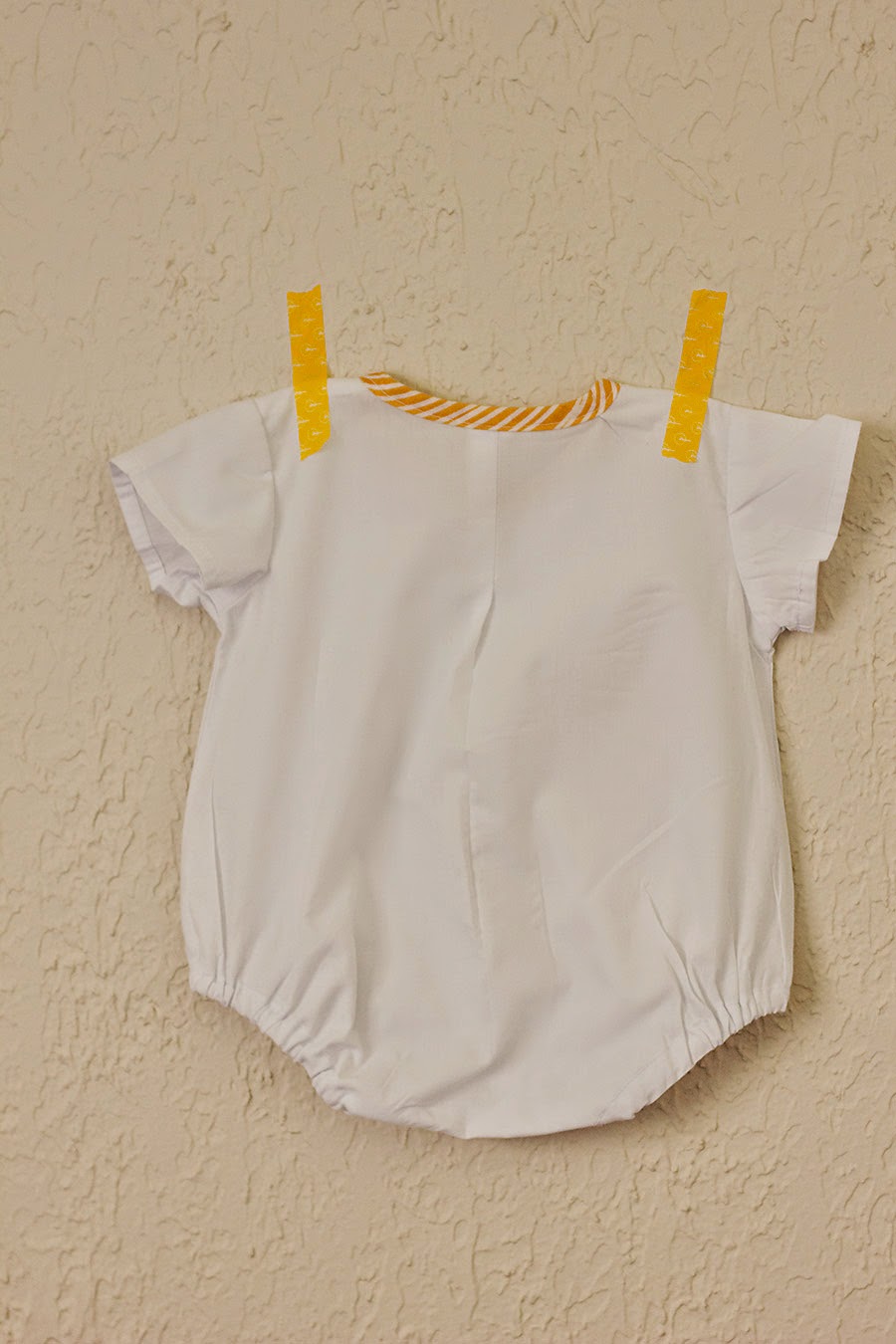 I was unsure of what fabric to use, nothing in my stash seemed right.  So although unpractical for a newborn who will be releasing all kinds of bodily fluids, I went with white, because I always have that in my stash and this particular fabric is very light weight (and slightly see through, oops).  With him being a summer baby the light weight will be perfect, I think, although the fabric really hated my iron no matter how I ironed it I always ended up with creases. 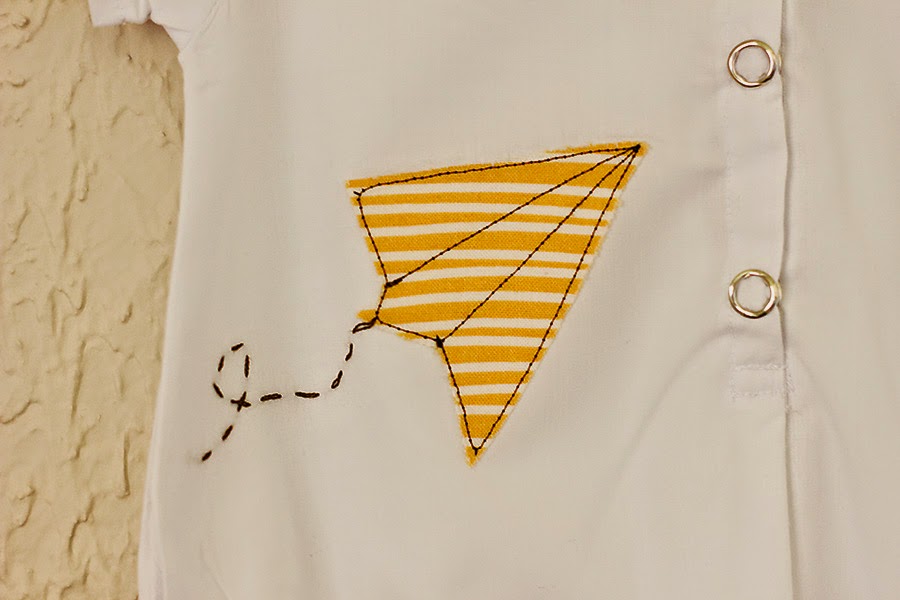 I wanted something more than just a plain white onesie, so I added a little paper airplane.  I stitched it down on my machine then added a little bit of embroidery thread for the tail and used a little scrap of interfacing underneath to keep the threads and knots away from his sweet, fresh skin.

Jack has requested a shirt just like his baby brother's, and while I am not one for matchy-matchy I think I may just add a little applique plane on his next shirt, he is sooo excited for a little brother.
Posted by brittney at 5:20 PM 7 comments: