I recently decided to get rid of all the old clothing I no longer fit or just don't like.  Why let it keep space in my closet when I don't know if I will wear them again, and let's be honest I will just keep making more.

So I cut a bunch of Lane Raglans and sewed them up.  It is really quick when you do them assembly line style.

There isn't a lot to say about these, but since I want to document all my makes for my notes, here they are. 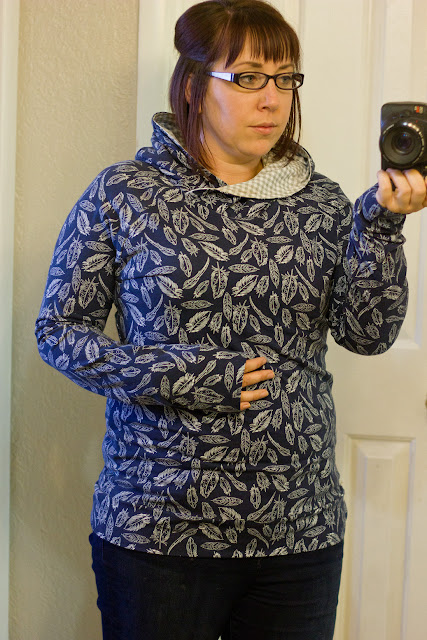 This is a gorgeous Art Gallery knit as a hoodie. 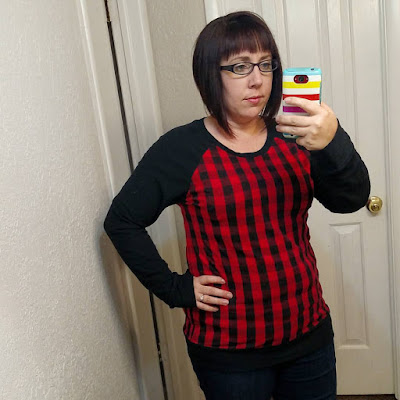 This one is cotton spandex on both fabrics. 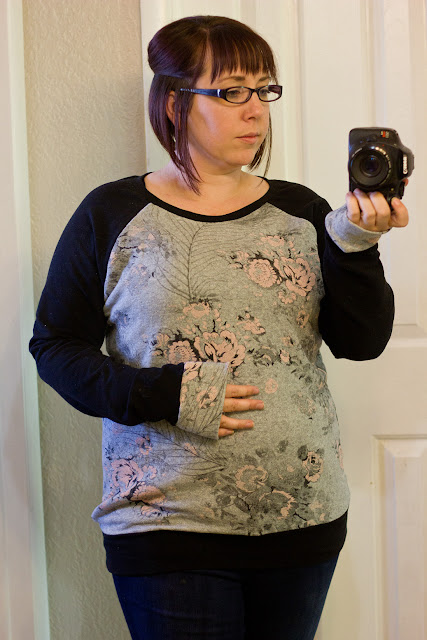 These are both french terry.  The gray is a really light weight, so cozy. 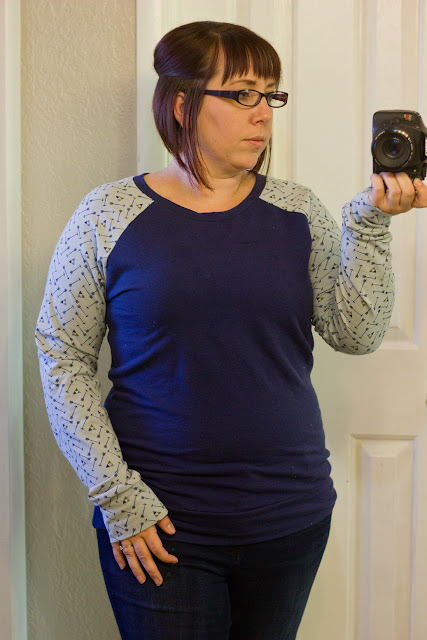 The blue is a french terry, the arrows are a cotton spandex. 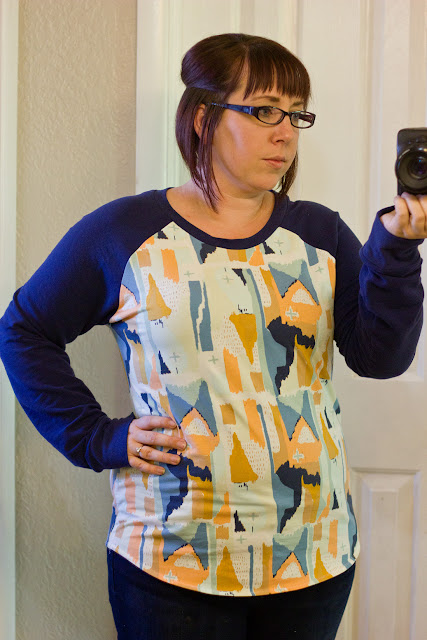 The abstract is an Art Gallery, and the blue is a french terry.  I modified the hem line to have a slight curve,  I just free handed it.

Basically I now have more than a week's worth of Lanes, if you count my previous ones.  And I actually had to stop myself from cutting out two more at the same time.  I really love the fit of this pattern.  Lucky for me raglans seem to be very 'in' lately.
Posted by brittney at 10:37 PM 6 comments:

Email ThisBlogThis!Share to TwitterShare to FacebookShare to Pinterest
Labels: for me, hey june, lane raglan

A while back I tested the Hatteras Hoodie for the oh so awesome Adrianna at Hey June.  I am just a slacker and haven't blogged them yet. 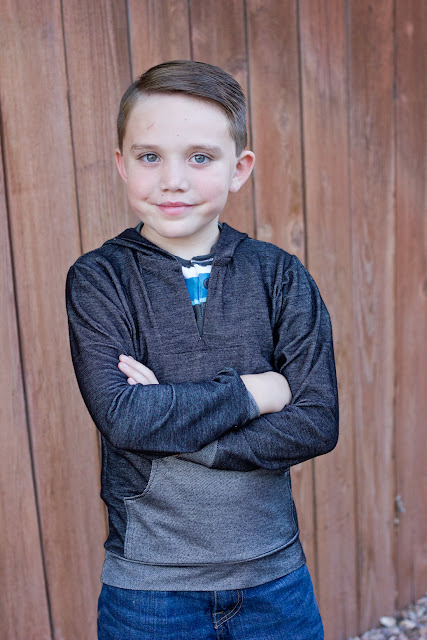 My original tester call was for the size 7 view A.  That would be for this stud.  I used a denim jegging material and for the accents used the wrong side of the fabric. 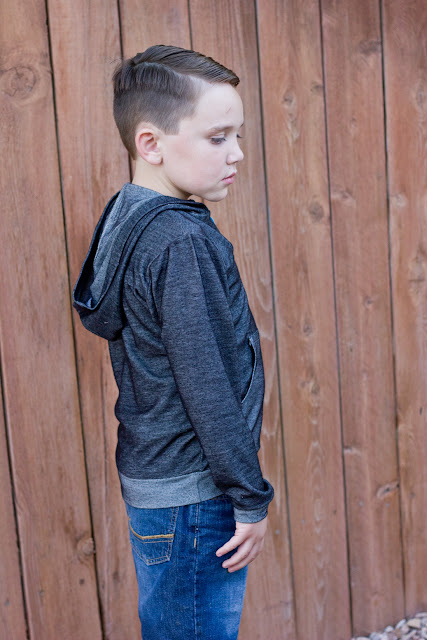 As it turns out, I probably should have made him a size 8.  That's what I get for not updating measurements more often, but I really like the slim look it gives a size down.  He wears this one most days to school, so I call that a win.  I really should make him another one... 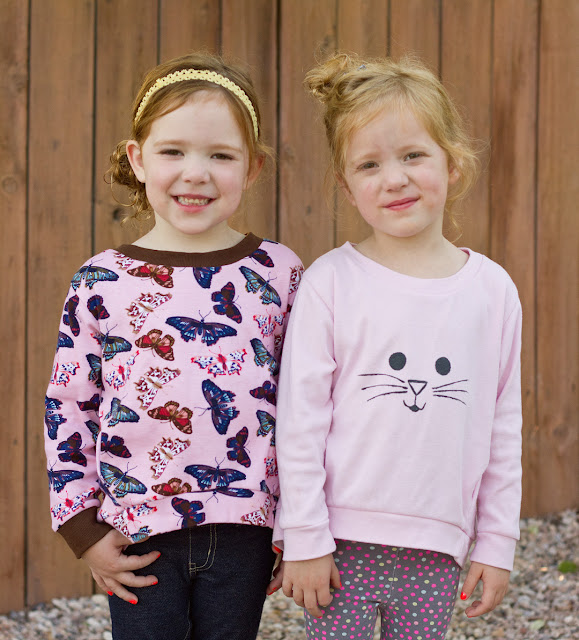 After that was finished, I decided to try out the view B.  These two were while still in testing, so the fit was tweaked a little for the finished pattern. 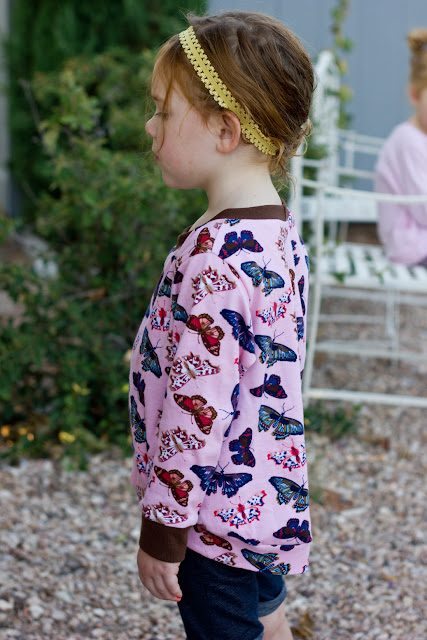 I love the slight hi-lo hem on them. 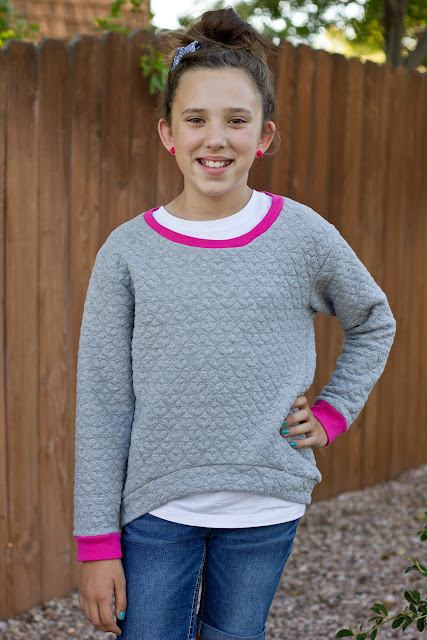 This one is also view B, size 10.  Again, she wears this one all.the.time. I used the rad quilted heart knit from the doodles line at Jo-ann's, and ribbing for the neck and cuffs. 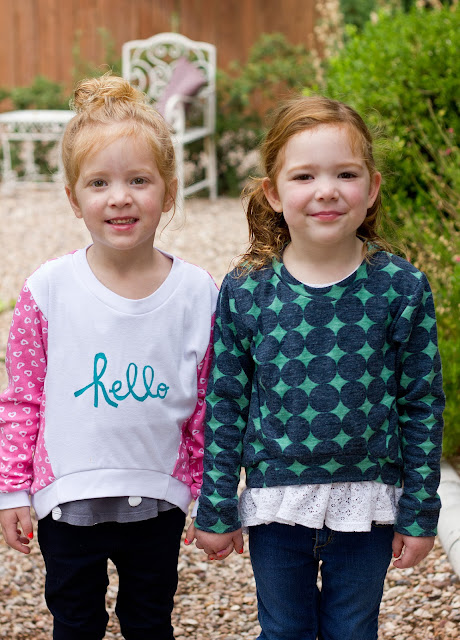 These were made with the final pattern (though before the pattern was released).  Georgie (on the left) is in one that is way too big for her chest size, but since they share and these are meant to be worn over another shirt, she gets to wear Elizabeth's size.  These are both a size 4. 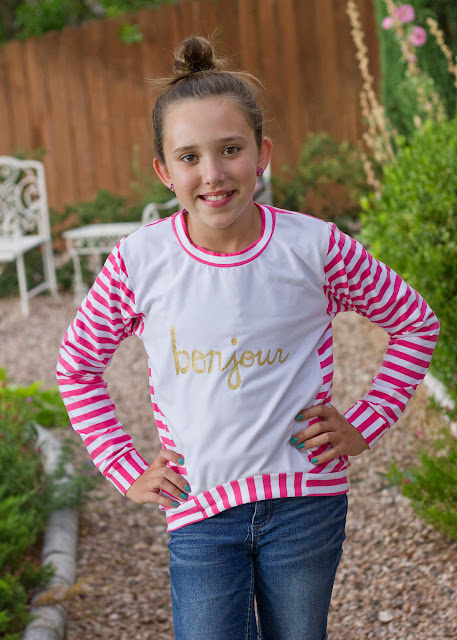 Abby loved her first one so much she demanded begged for another one.  I let her design this one herself, though I did pick to change up the direction of the stripes.  This one isn't quite as warm as the first I made for her, so it is more of an around the house rather than out in the cold mornings on the way to school. 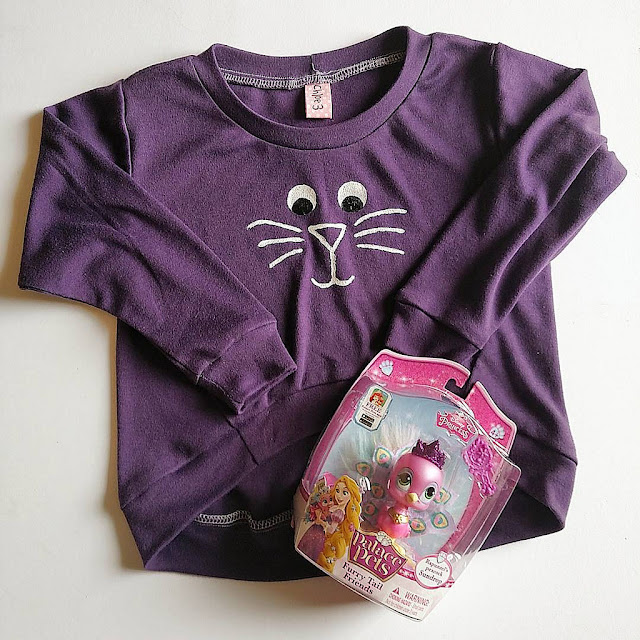 I thought it would be fun for my niece's birthdays to make them a kitty sweater.  I have two nieces and they play most Sunday nights with the twins at Grandma's house while we visit.  One of their favorite things to do is pretend they are all cats.  I added a toy in too, since I don't want to be the weird aunt that just give clothes when they really want toys. This one is for the younger niece, in a size 3. 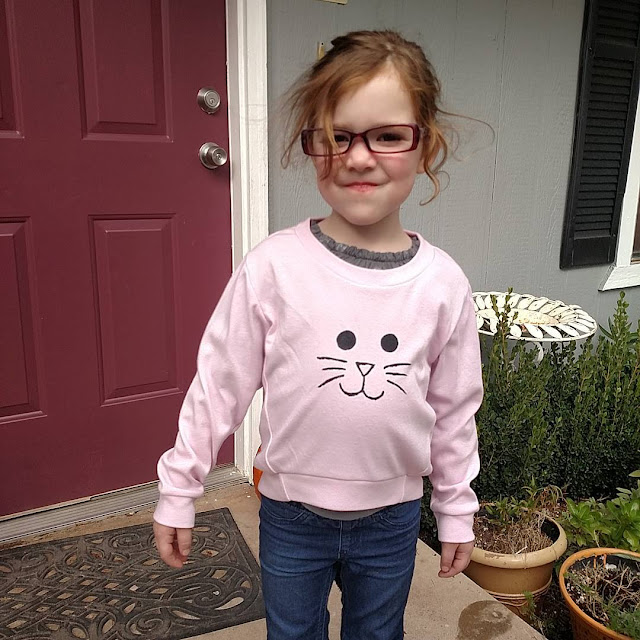 This one is for the older niece, in a size 5.  Iz is just about that size, so I had her model for a quick picture.

During testing, we kept pestering, begging, bugging suggesting how awesome this pattern would be in adult sizes.  And, um, it is amazing. 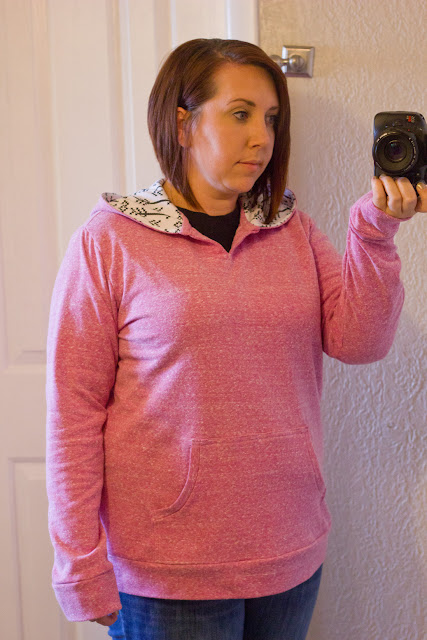 For my tester version of the Halifax Hoodie I sewed up a view A in a french terry from Jo-ann's.  I really love it and am so excited it is finally cold enough to wear it! 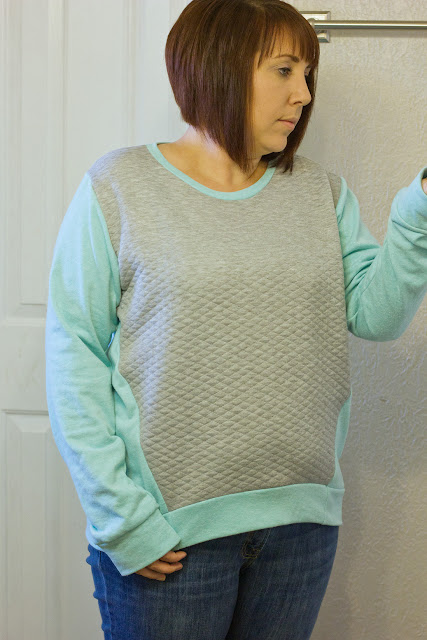 Then, last week I made a view B for me, too.  I have been dreaming of one for a while now, and it is so comfy! The mint is a french terry from Jo-ann's and the quilted knit is from Raspberry Creek Fabric.  I have worn this a ridiculous amount of times already. 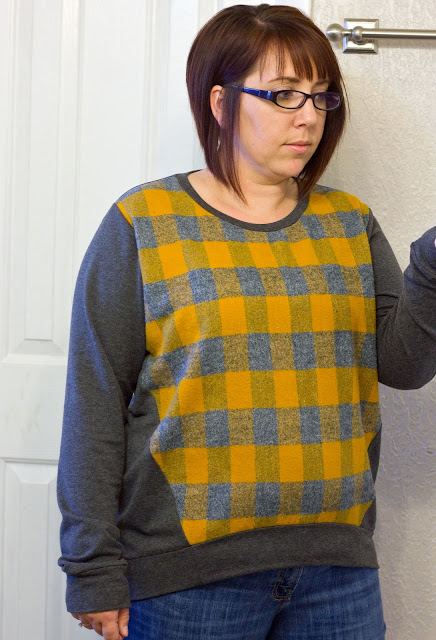 Again a view B, but this time I copied a few other ladies and used this Robert Kaufman mammoth plaid for the front and a french terry for the body, again both from Raspberry Creek.  I didn't change anything to accommodate the woven since it was roomy enough in my first run through of the pattern.

There are lots more options in the Halifax, five views in all.  Also, the Hatteras includes a zipper option.

Email ThisBlogThis!Share to TwitterShare to FacebookShare to Pinterest
Labels: for Abby, for Jack, for me, for others, for the twins, halifax hoodie, hatteras hoodie, hey june
Newer Posts Older Posts Home
Subscribe to: Posts (Atom)