Geraniums by the pond.

Girlfriends need more dresses.  Poor things have nearly outgrown every single one in their closets, actually, every one.  After putting them in too short dresses for church for the second week in a row, I knew something had to be done. 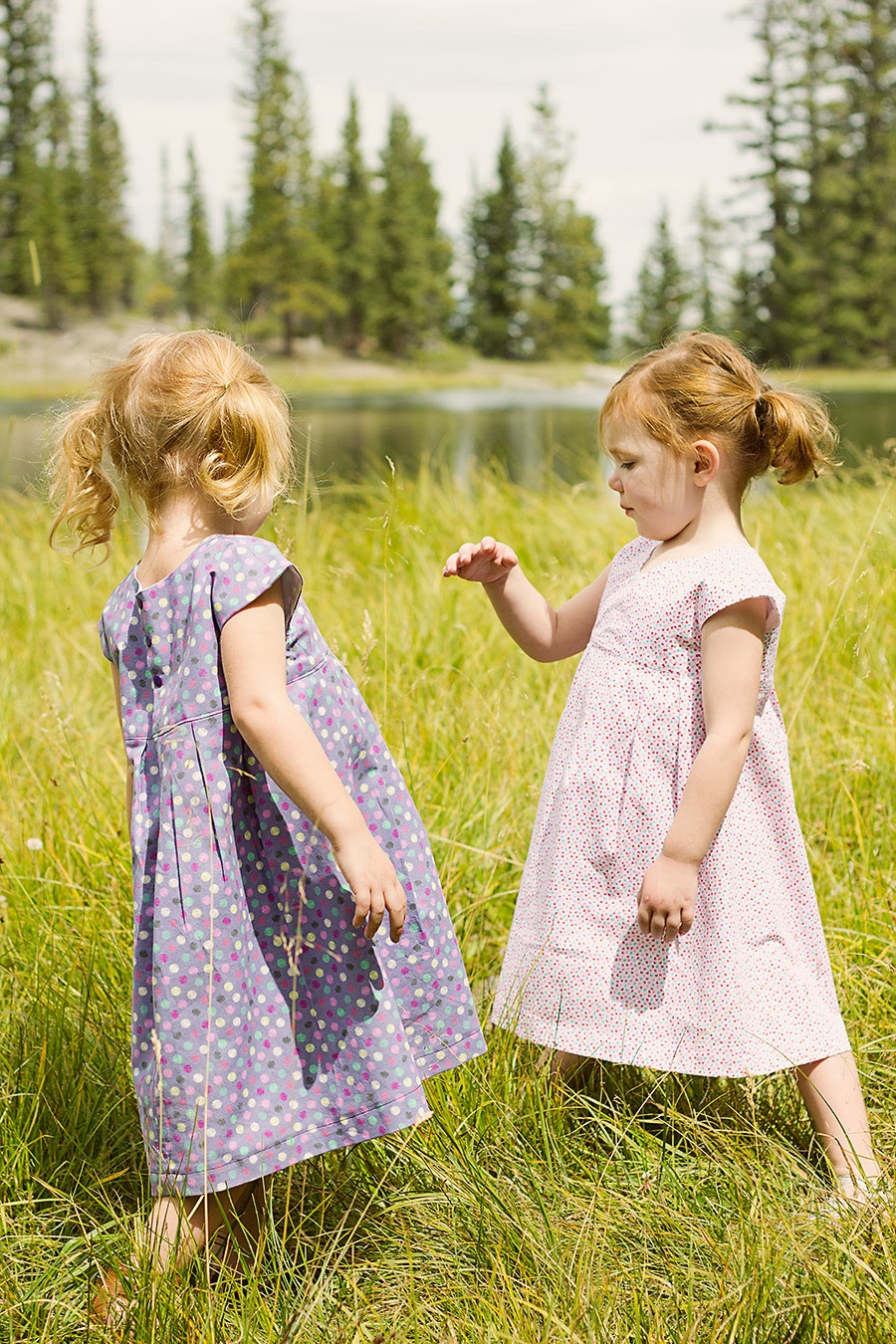 So I chose the Geranium dress because at this point I can nearly make it with my eyes closed.  Okay, not so much eyes closed, but I don't have to look at the instructions.  And really, what more can be said than what I have already said?  These are my eleventh and twelfth Geraniums, crazy. 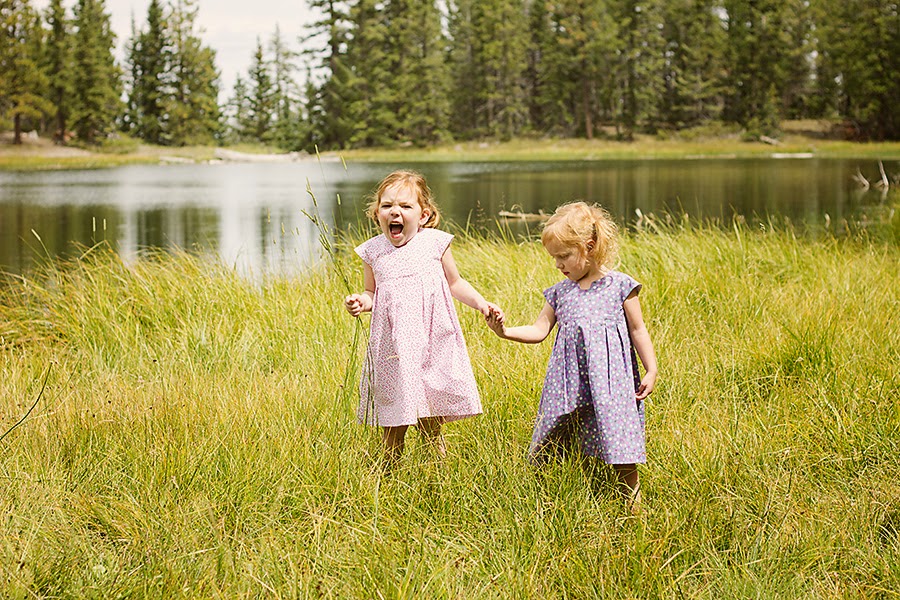 These chicks are getting harder and harder to photograph together. 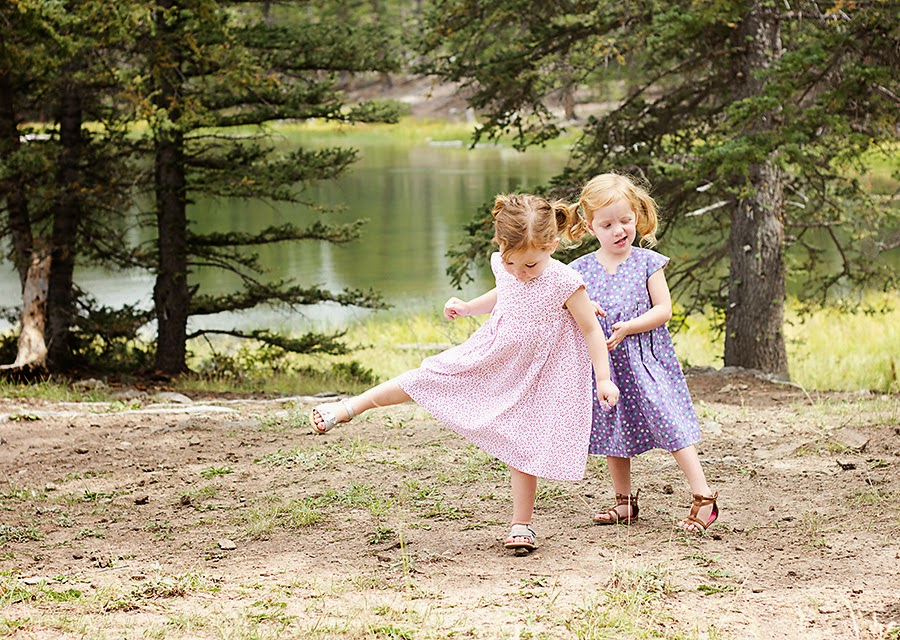 Even in this gorgeous spot in the mountains next to a little pond. 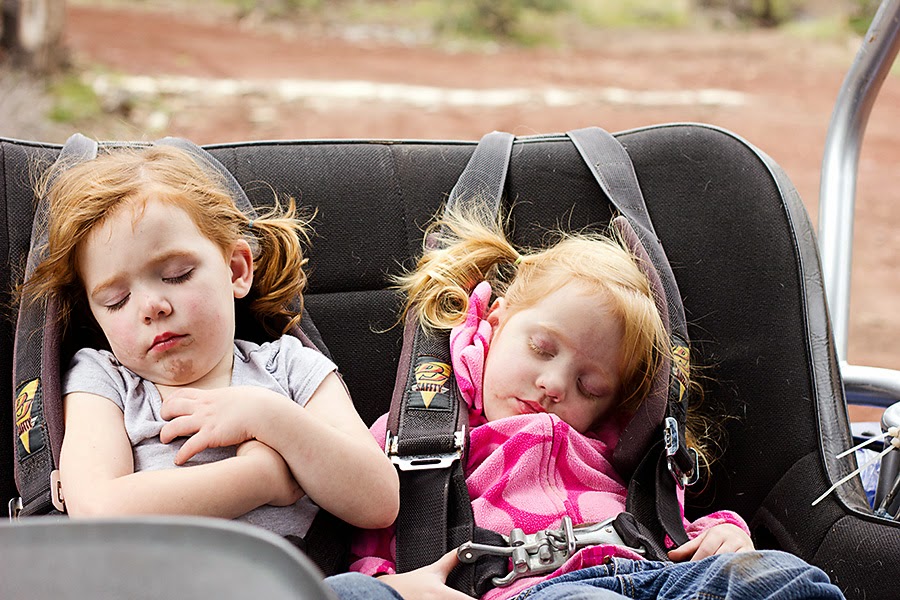 But, to be fair, they had just been awoken from a short nap on the rhino ride to the pond.
(Yep, I took their new clothes camping so I could find a cool spot to get some good photos.  Too bad they didn't really want to cooperate.) 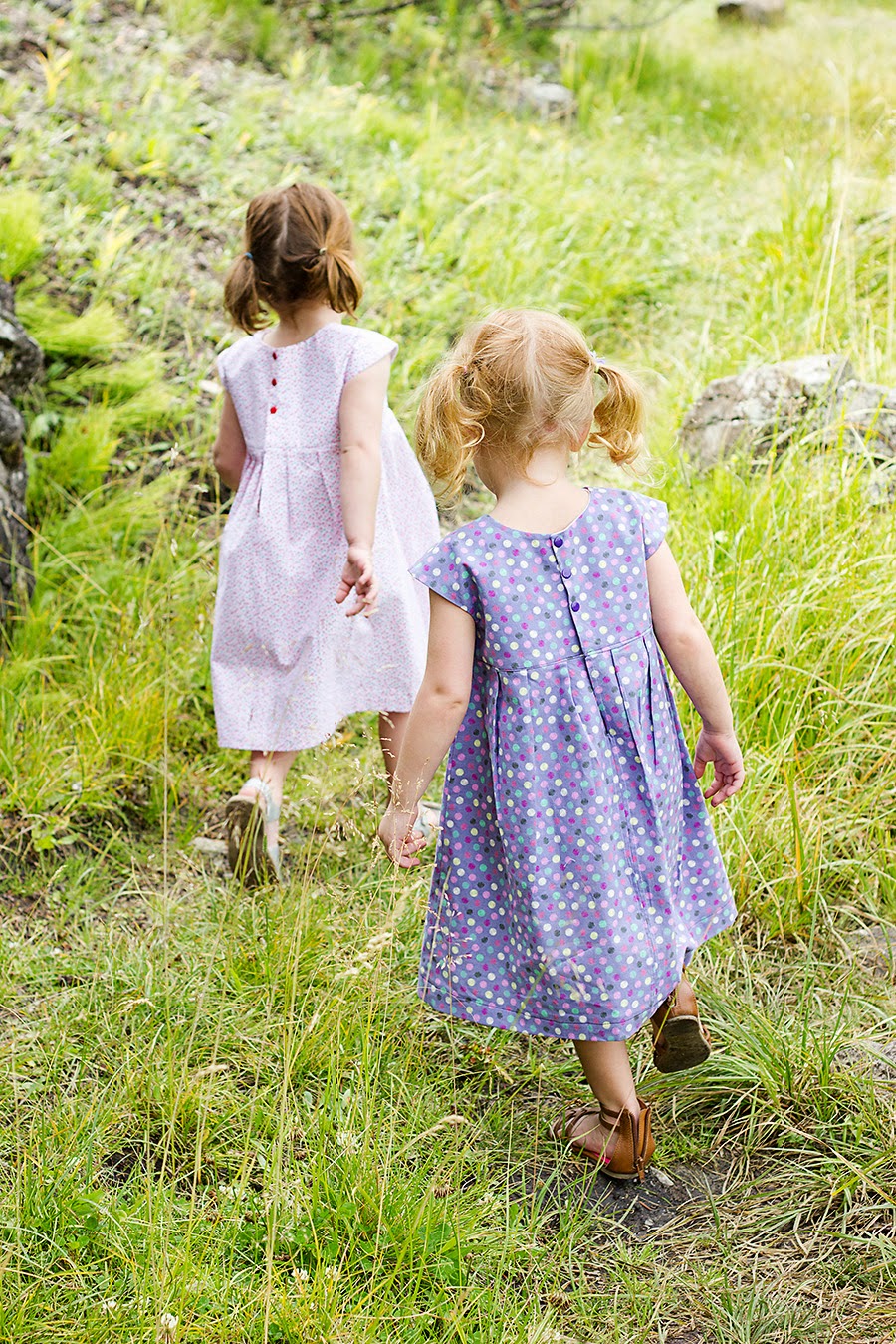 So, we decided to go on an adventure. 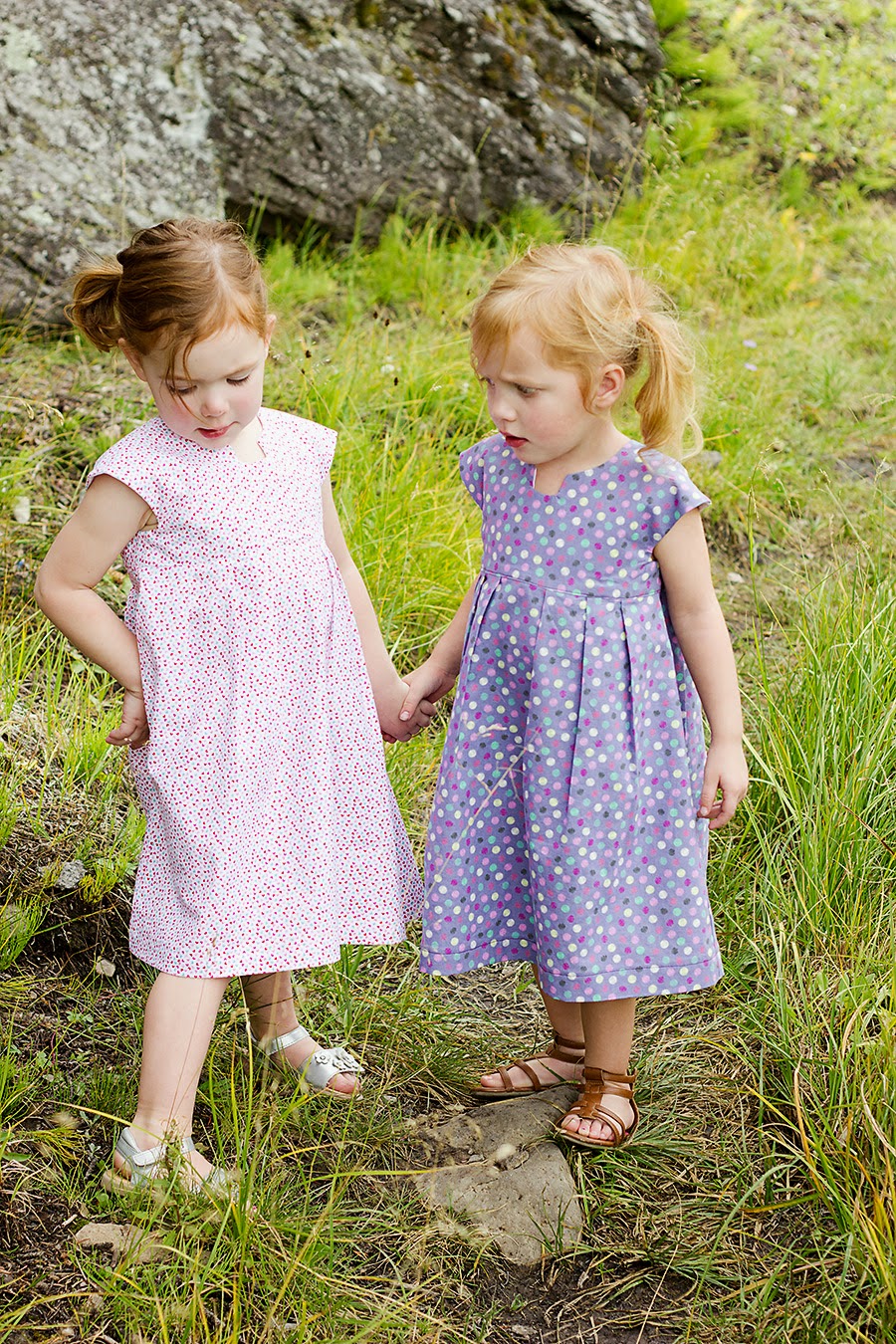 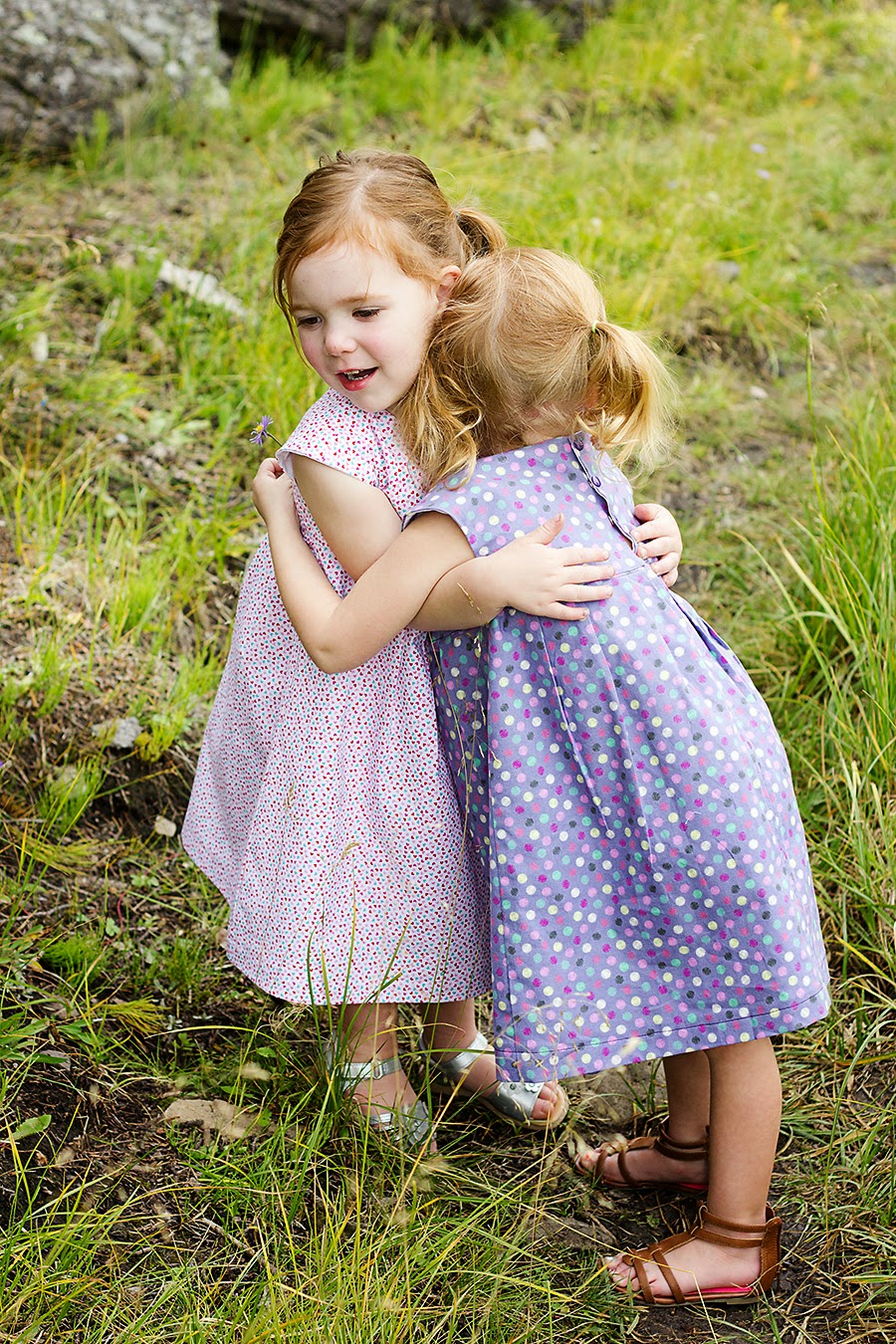 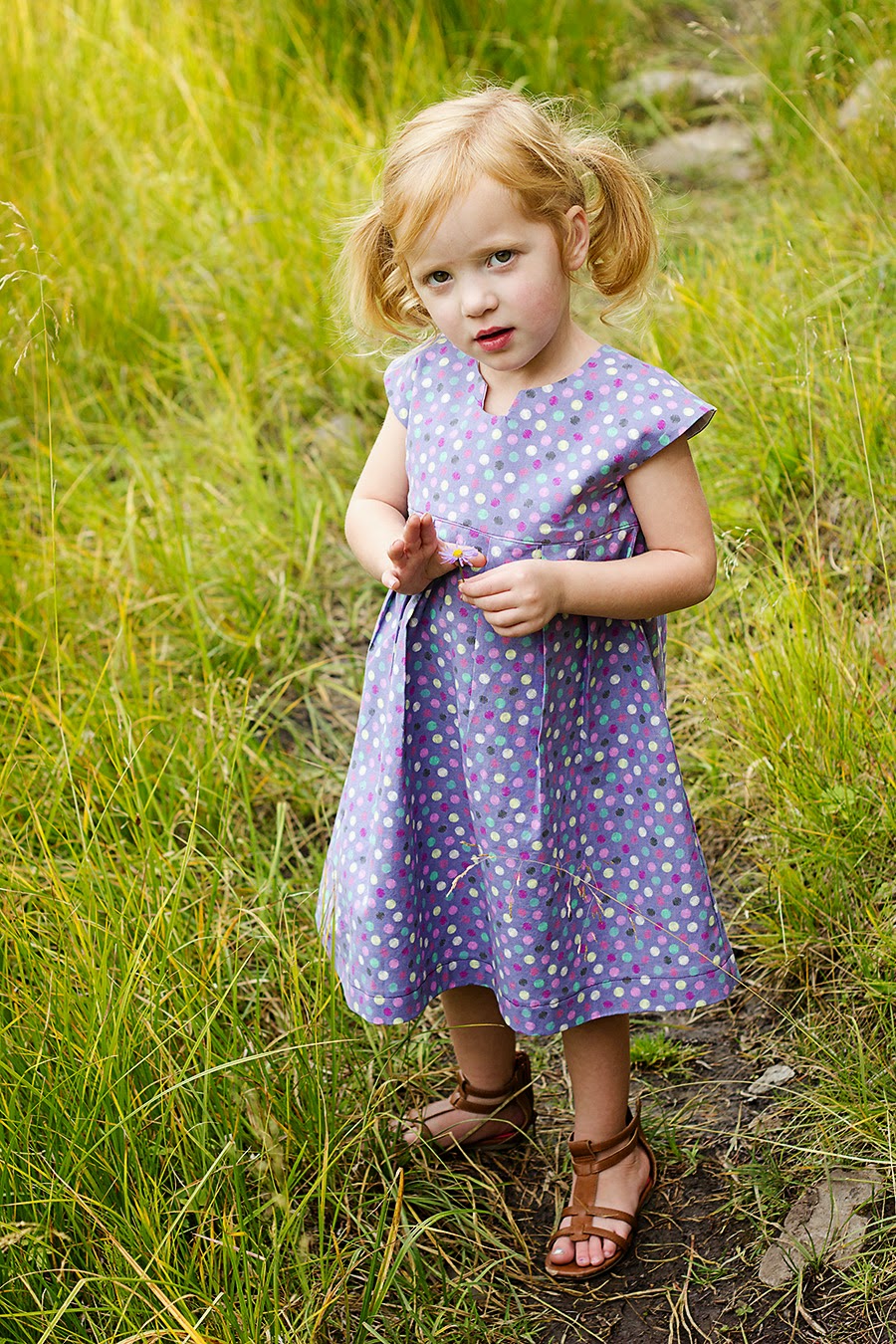 Georgia is obsessed with purple, I mean crazy obsessed.  So I knew she needed something purple in her closet.  She was so happy! 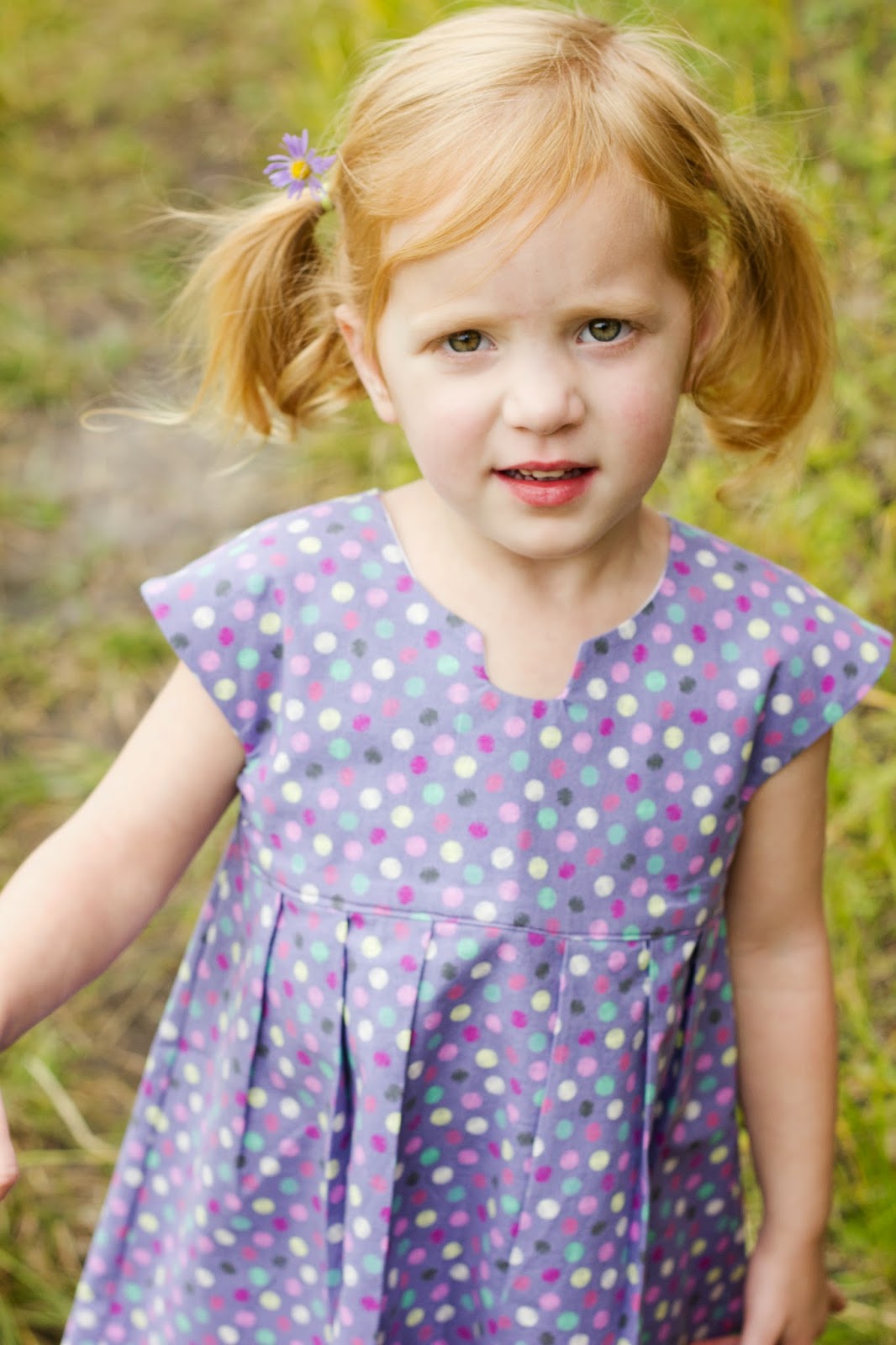 And even happier to find purple flowers to pick and put in her piggy tails. 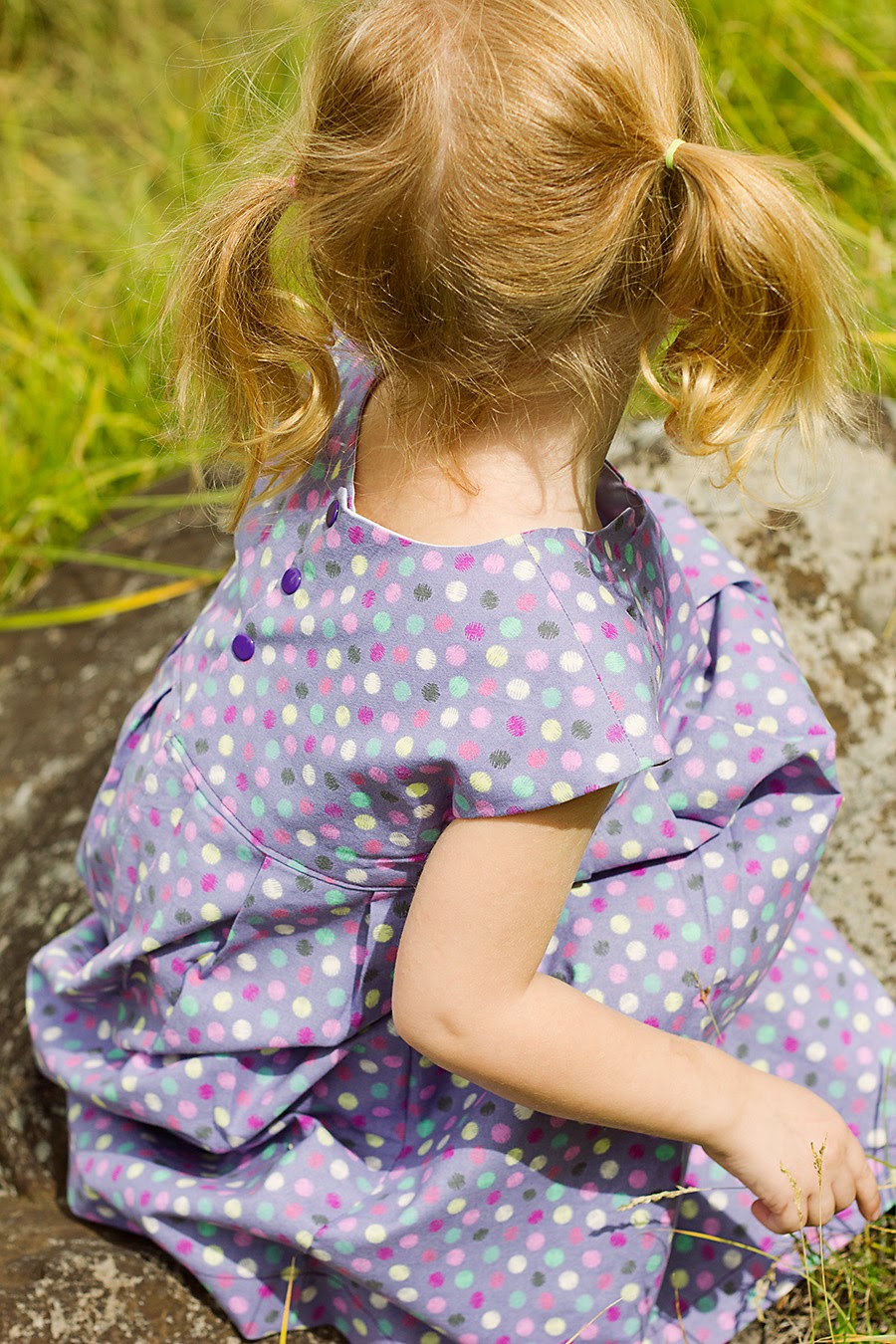 A few purple snaps down the back.  I want to go back and add another snap to each of the dresses, but I was in a hurry as I was literally finishing the dresses a few minutes before heading out the door. 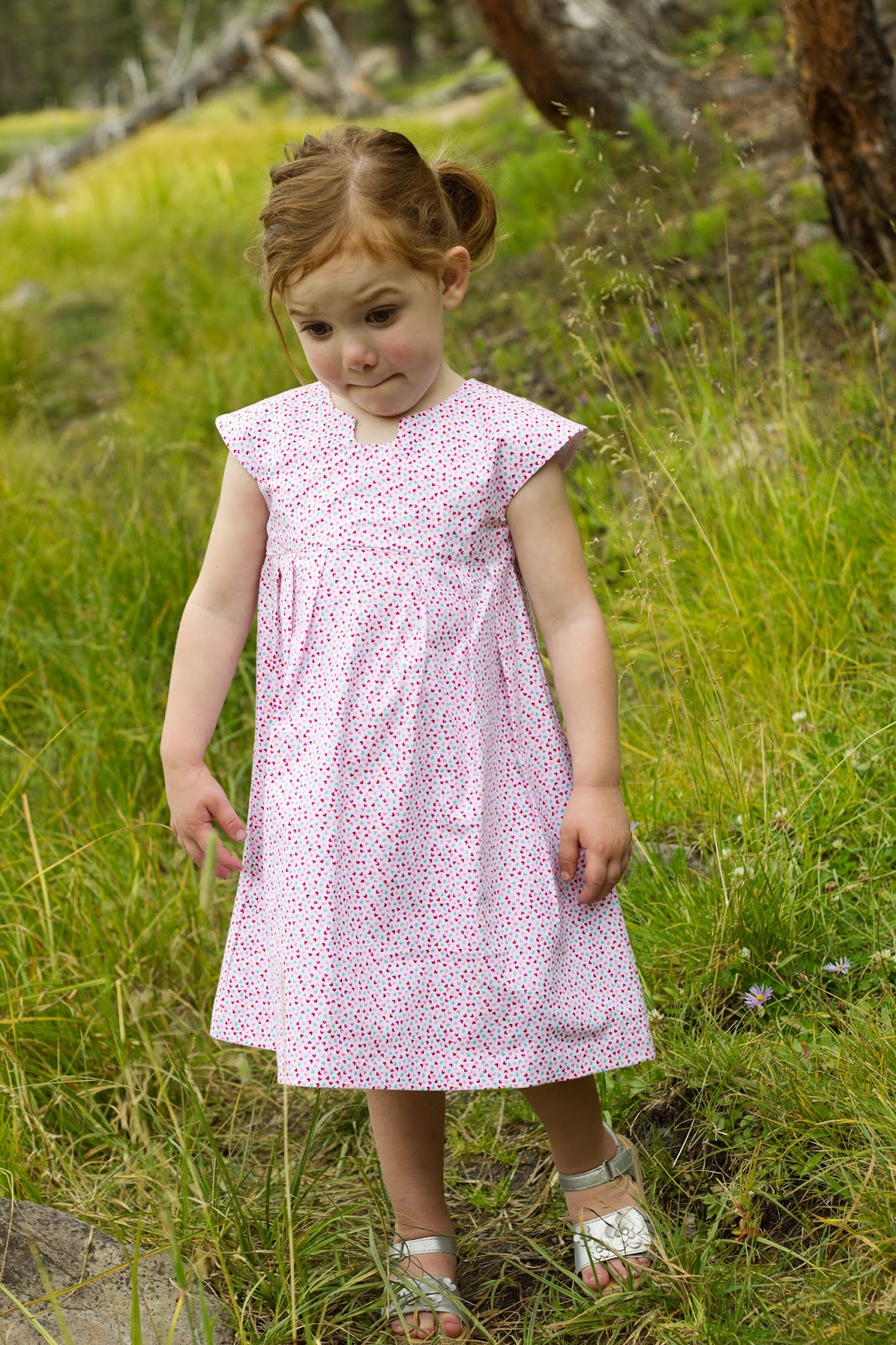 She is so much like Jack, when he was this age he refused to look at the camera too.  Any time it came out he would look away, I would put it down or hide it behind my back and he would look at me again.  Sigh. 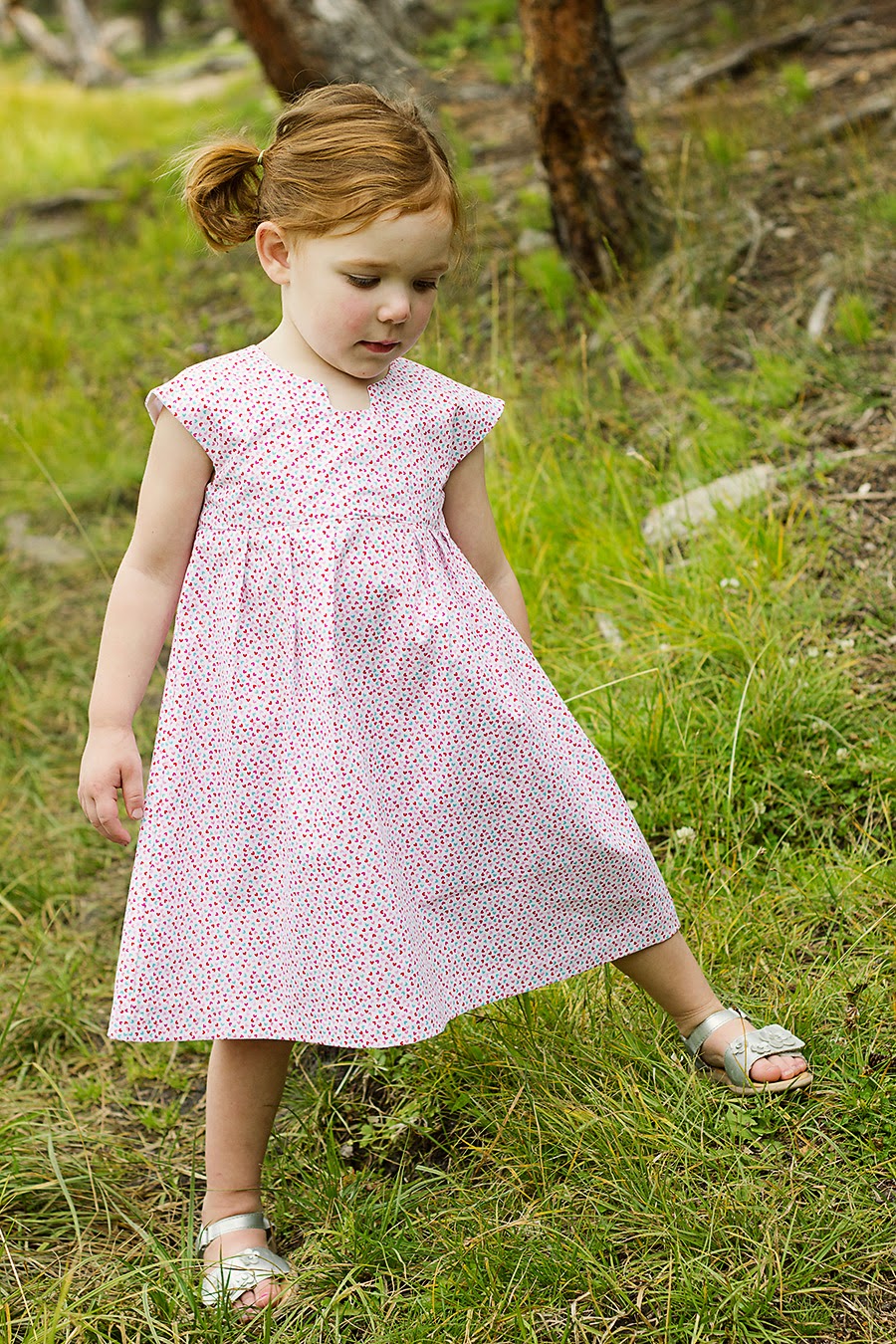 They are both size 4T, so hopefully some growing room.  They are still wearing these ones, though they are getting quite short now and a little tight on Z's chest.

Elizabeth chose her fabric, I think she made a good choice!  I couldn't get any close ups, but there are little pink, red and blue hearts all over.  I only had one yard so I had to do some seriously creative cutting (I love non-directional prints!), I literally had only a few scraps left, but I did it!  I had these cut out for a little bit, so she was so excited when I brought them up to camp with us and showed her.  The big four went to the mountains with Grandpa and Grandma the night before, then Ben, Sam and I went up just for the day and brought the little girls back home with us while Abby + Jack are still up there for the long weekend.

They could definitely use a few more dresses, but I think I first need to get some pants made for Jack.  When I was packing for this trip I realized he had no pants that fit!  Oops!  Well, he had some that fit around, but not in length.  The cool weather sneaks up on me every single year, someday I will be prepared.
Posted by brittney at 10:07 PM 6 comments:

Email ThisBlogThis!Share to TwitterShare to FacebookShare to Pinterest
Labels: for the twins, geranium dress, made-by-rae

Ever since I made Sam's first collared Lullaby Bodysuit with a collar I have been thinking about making another one, and even though I have three Geraniums cut out waiting for me (2 for the twins, 1 for a gift) this jumped the queue.  Late night nursing sessions let me brainstorm exactly what I wanted, and I am excited to say it turned out just like I had imagined!  Don't you just love it when that happens? 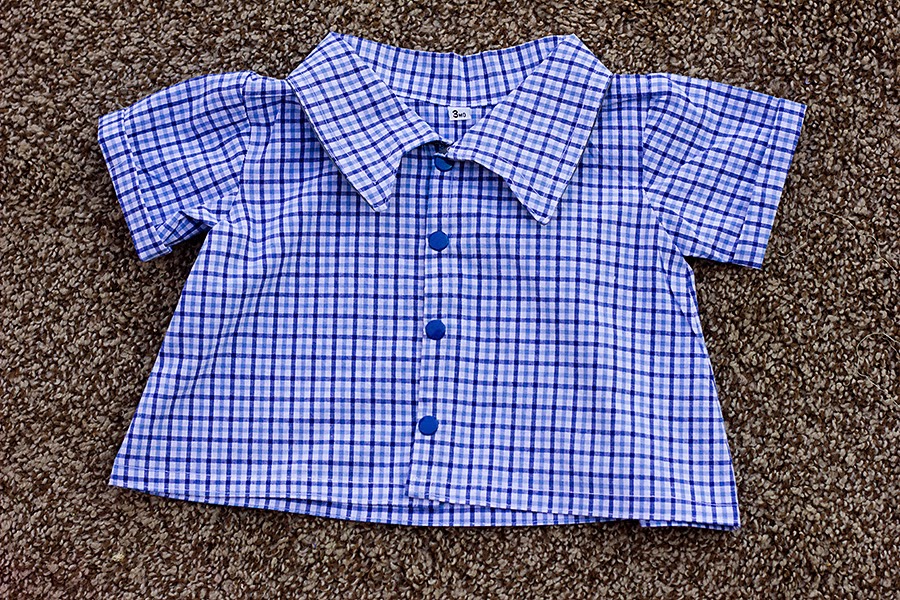 I made the size 3 months in a so soft shirting.  I wanted roll up sleeves so I added two inches to them, I still need to go back and tack them to keep them rolled.  I wanted something like the Sketchbook Shirt, so I extended the placket all the way to the hem and added the collar again. 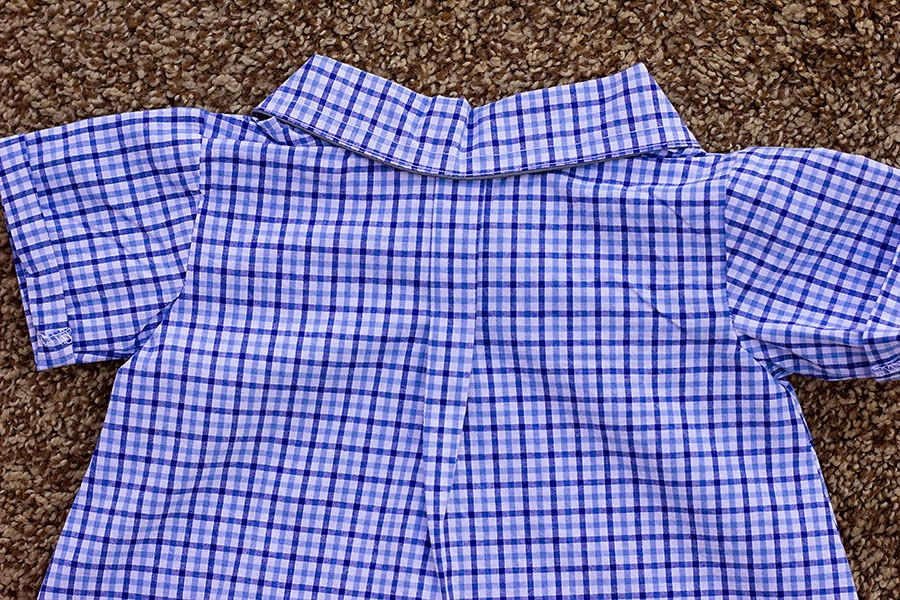 On the back I made a box pleat on the right side of the fabric, it kind of blends in.  I also added two rows of topstitching to the collar and the hem. 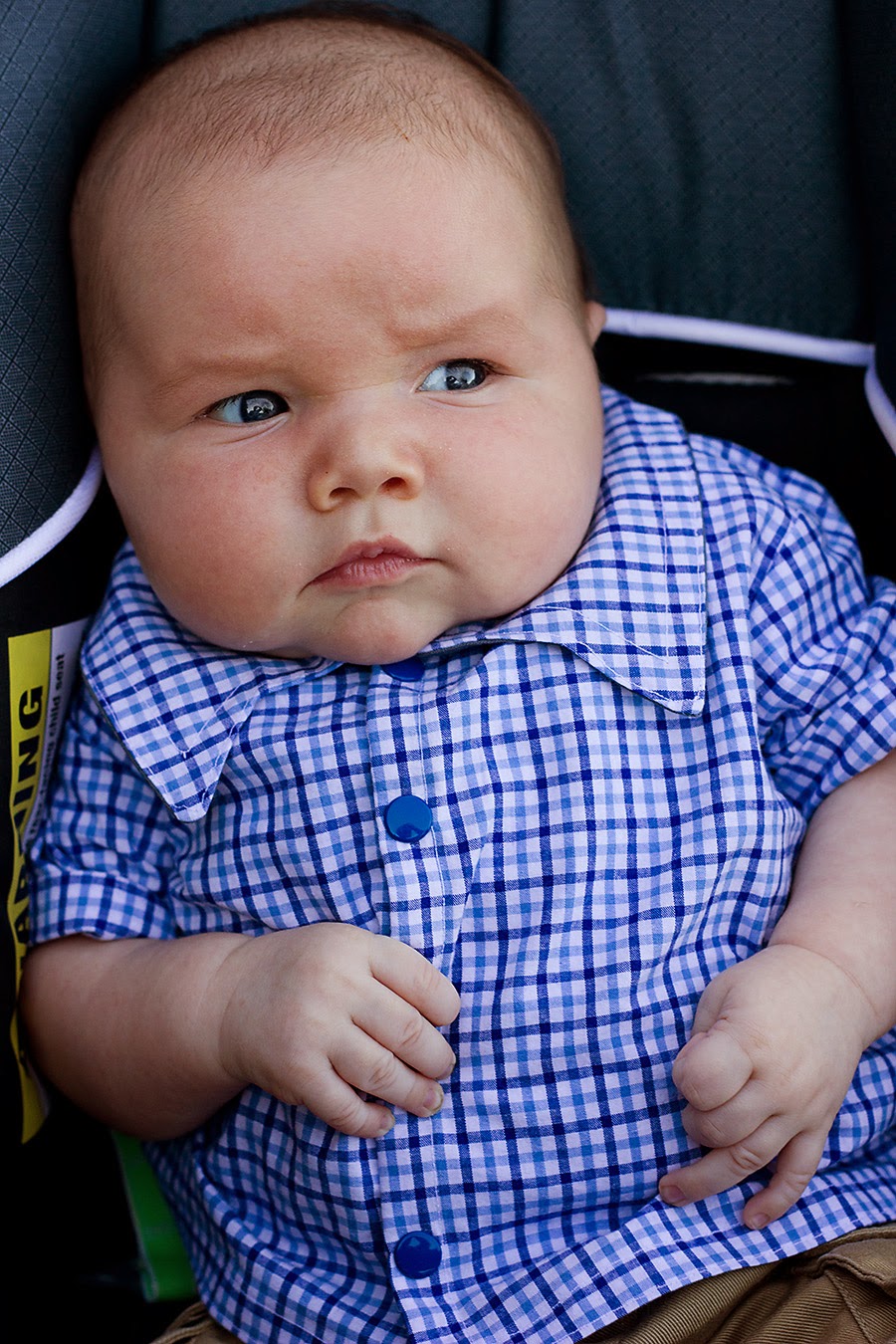 Duuude!  I totally just made legit jeans, and I am so excited! 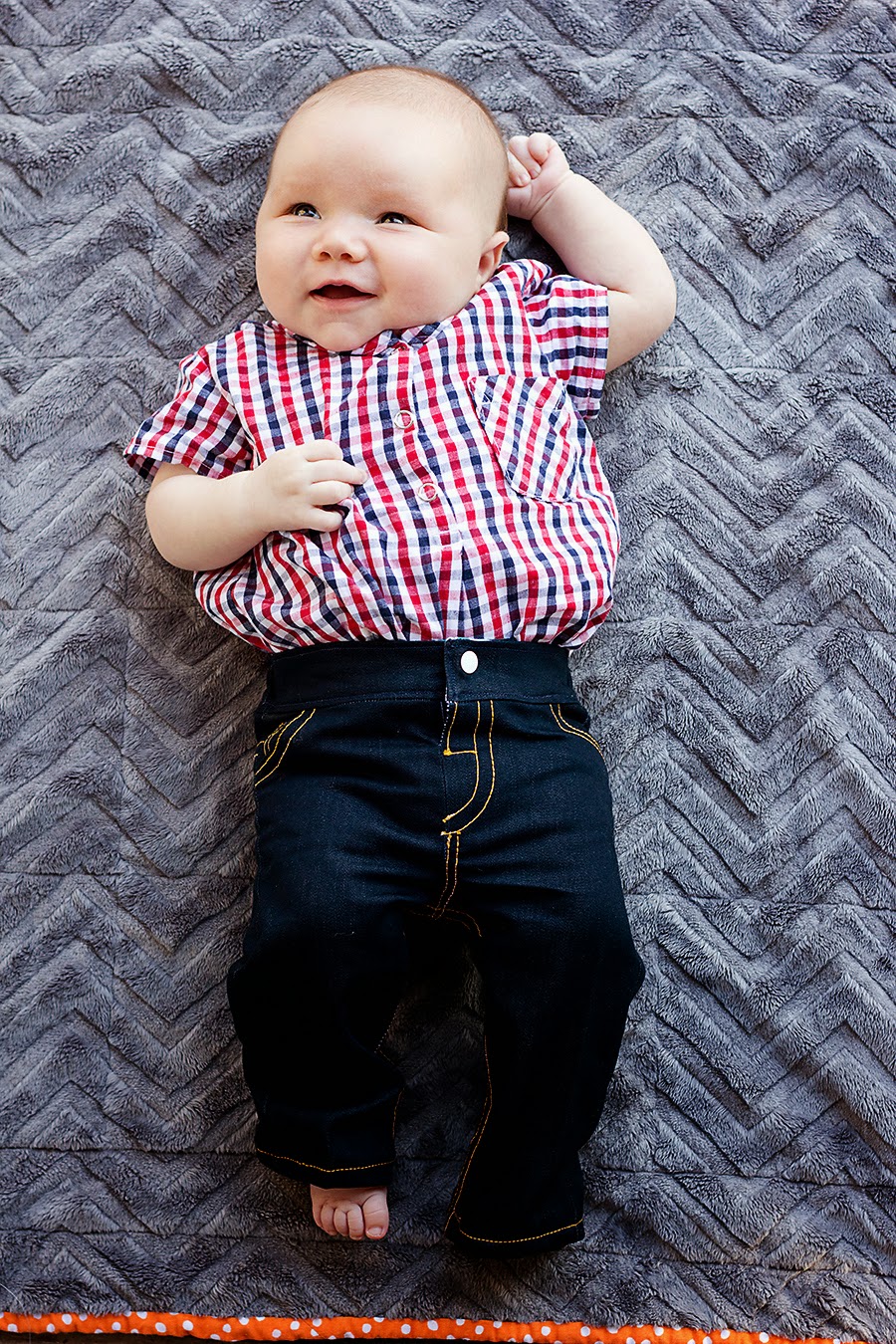 And obviously so is Sam, ha!

Back in March I bought the Small Fry Skinny Jeans (I remember it was March because we were on our first ever beach vacation, random, I know).  I bought both sizes ranges and mental noted I wanted to make them for the fall, I figured I would make a small size before tackling Abby or Jack's size.  So I made the size 3-6 month for Sam, with a half fly and lots of topstitching.  I actually used the waistband with the topstitching option, but I was so fed up with the topstitching thread by the time I got to the waistband I just did my own thing.  Which is also why I used a snap instead of a legit jean button, I had no desire to make a button hole with that thread, also the reason I left off the button loops.  My machine is such a diva.

The fit is awesome.  Seriously, this pattern is so great.  I did struggle a bit with the half fly instructions, but I figured it out and it will be much easier next time.  (I already have a red pair cut for him!)

P.S. he is wearing his Layette Bodysuit I made before he was born. 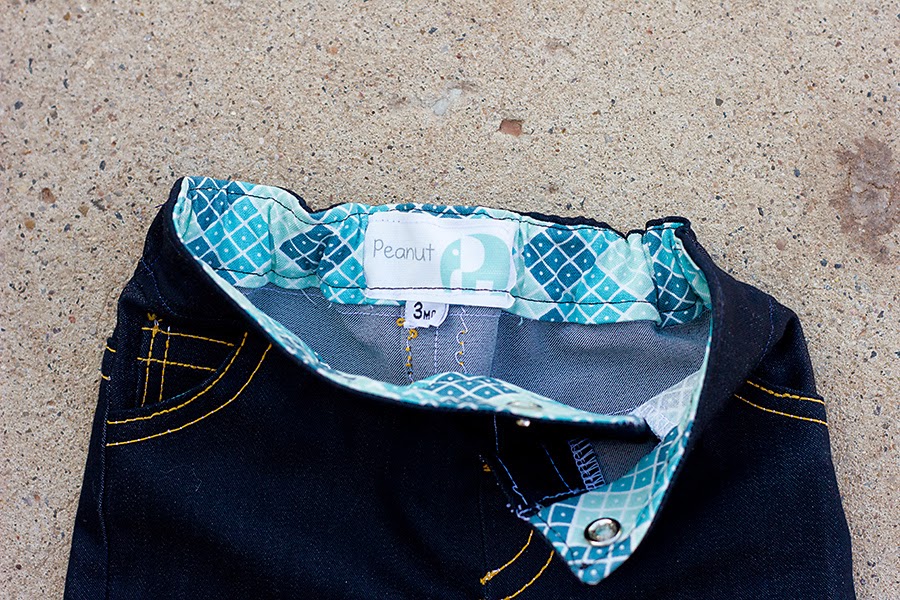 See that ugly stitching on the inside?  That isn't even the half of it.  *Sigh*.  My machine seriously hated the thread, even with a longer stitch and a denim needle.

But look at that adorable little coin pocket, and fully functioning front and back pockets... not that he will be needing them, ha!  Details are my favorite part. 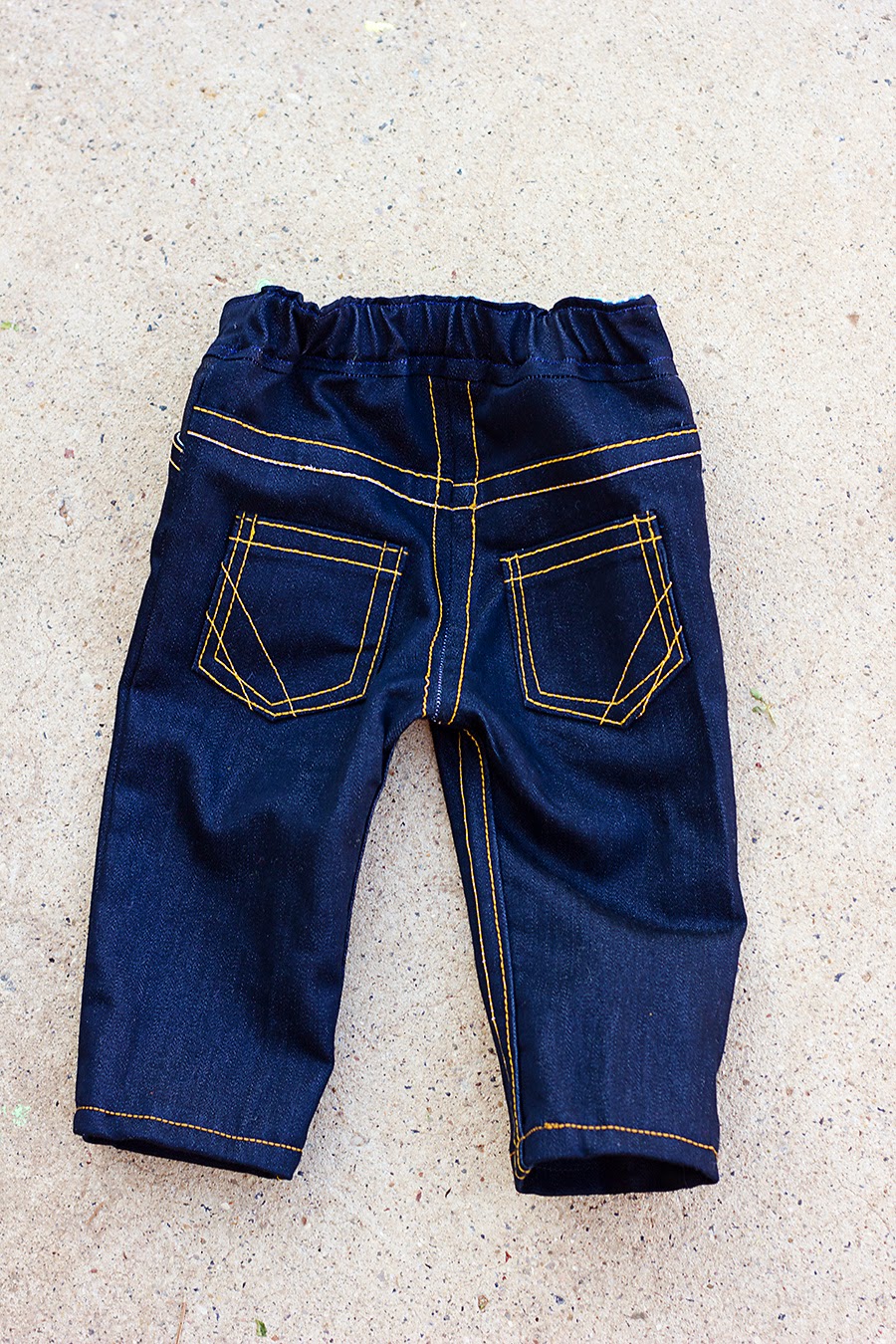 I am not thrilled with the back vertical stitching, but I had no desire to unpick it for a third time and I was sick of my machine getting jammed.  I figure since he is laying on his back for 90% of the day no one will even notice (hopefully).

They are plenty long, long enough that I should probably roll them up, but I am glad because I forgot to check if I needed to add length like I usually do for my crazy tall kids.

It's a great pattern, I would definitely recommend it.

Oh.my.gosh.  I am dying right now.

So, in our church we have a tradition that the Father (or sometimes Grandfather) gives a new baby a special blessing during our Sacrament meeting.  Traditionally babies wear all white, but I kind of wanted to go against that.  Don't get me wrong, I have nothing against the tradition, the other four kids wore complete white, but for some reason I couldn't get this out of my head.  I actually was picturing a brown or gray linen, but I couldn't find the "right" one, so I went with an ivory linen for the bottoms.  If I had more time I am sure I could have found something online, but I had less than a week to figure something out... but I am in love.

Side note, but I pretty much learned to sew because I wanted to make the twins blessing dresses.  I taught myself while I was pregnant with them and even figured out how to size down and adjust a pattern in just a few short months.  If you are interested, there is a picture on Flickr as it was pre-blogging days.  Sewing satin and ruffle fabric wasn't easy or fun in the early days, ha! 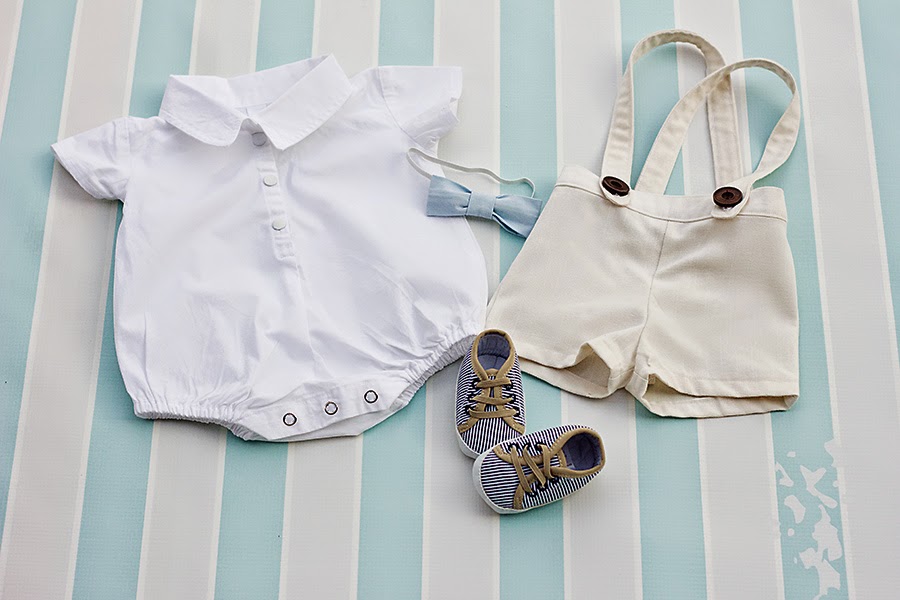 I am obviously obsessed with the Oliver + S Lullaby Layette Bodysuit, so that was a no-brainer that I would use it somehow in this outfit.  But I wanted something more, something special.  A while back someone (I think Sarvi?) mentioned how darling it would look with a collar, I definitely agreed and had been thinking about how to make that happen.  Well, guess what?  This was the kick in the pants I needed to get it figured out.

I used the basic shape of the Sketchbook collar, but made some adjustments being the bodysuit is a size 3 month and the smallest Sketchbook is 6 month, plus the necklines are different sizes.  I used a crisp white shirting poplin and the collar is almost too stiff even though I used a really light interfacing.  Oh well.  It could still use some adjusting, but I am pretty happy with it.

The suspender shorts, aren't they completely adorable?! They are from here.  I can't vouch for the instructions because I didn't like they way you were instructed to put them together, so I did my own thing... Also, the waistband was 1/2" too big and the pattern calls for 3/4" elastic but I could only get 1/2" to fit, which was annoying.  But oh my gosh aren't they cute?!

And for the bow tie I just used rectangles and my memory from when I had made one for Jack earlier in the year.

The shoes are completely impractical and silly, but (shall I say it again?) adorable!! 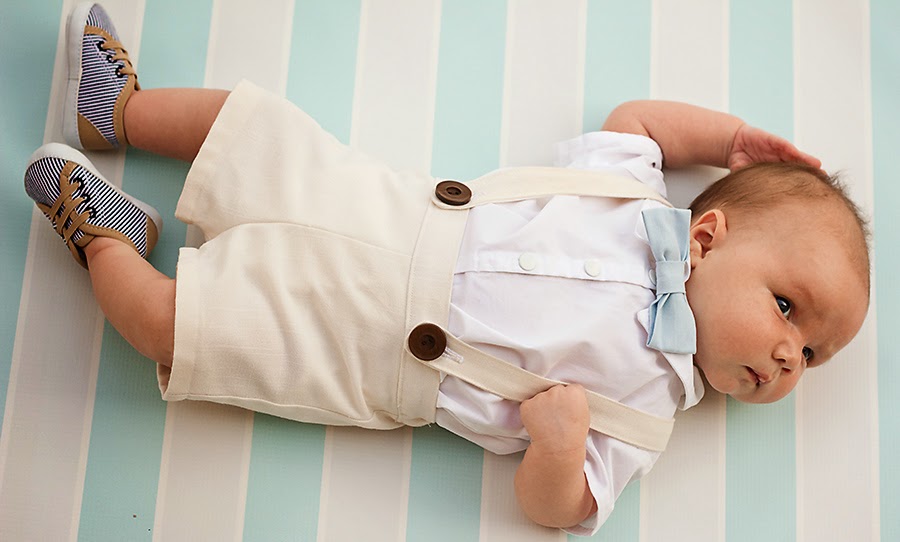 So Mr. Sam is ready for his first big shindig (tradition is also to serve a luncheon after the meeting) and I am just so happy with how this all turned out!
Posted by brittney at 9:32 PM 10 comments: