Some more Disney (and pinterest) inspired dresses for my friend's up coming cruise. 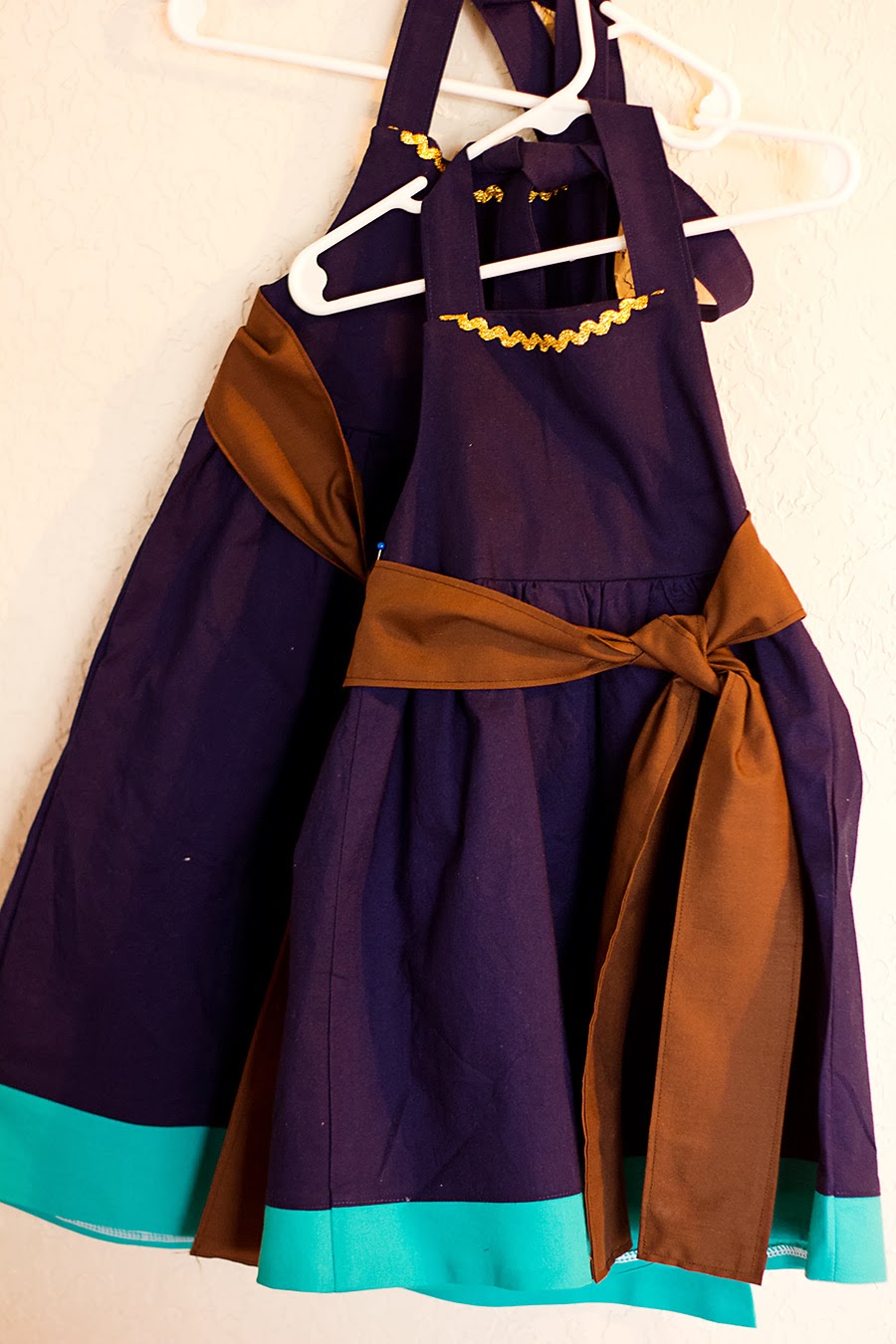 Same horrible pattern as last time but since I had already altered all the measurements and figured out the hard part, it was much easier and quicker this time around.  Sizes 5T and 12m. 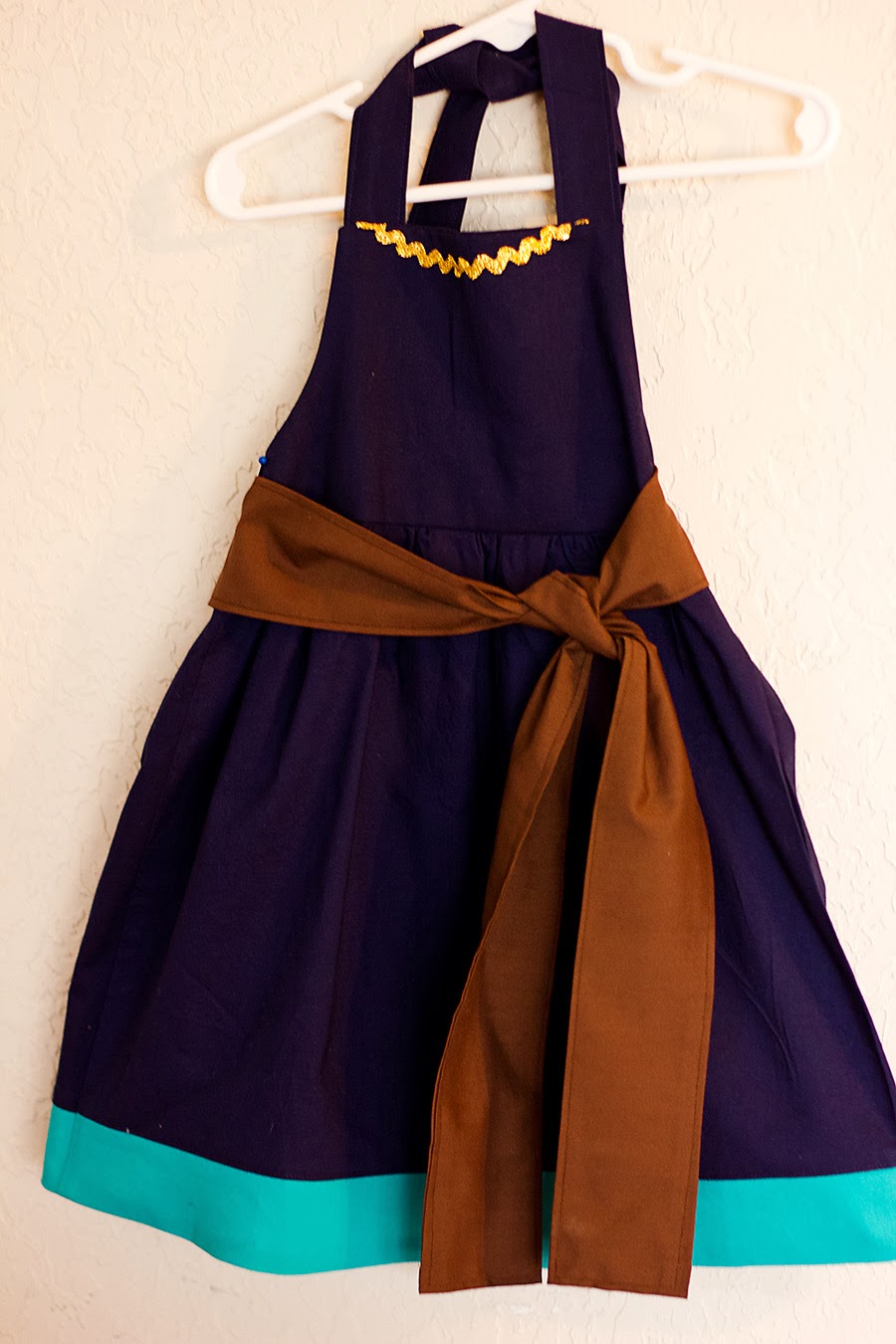 This is another one she saw on Pinterest and I tried to get it as close to the inspiration dress as I could, I think it came out pretty well :) 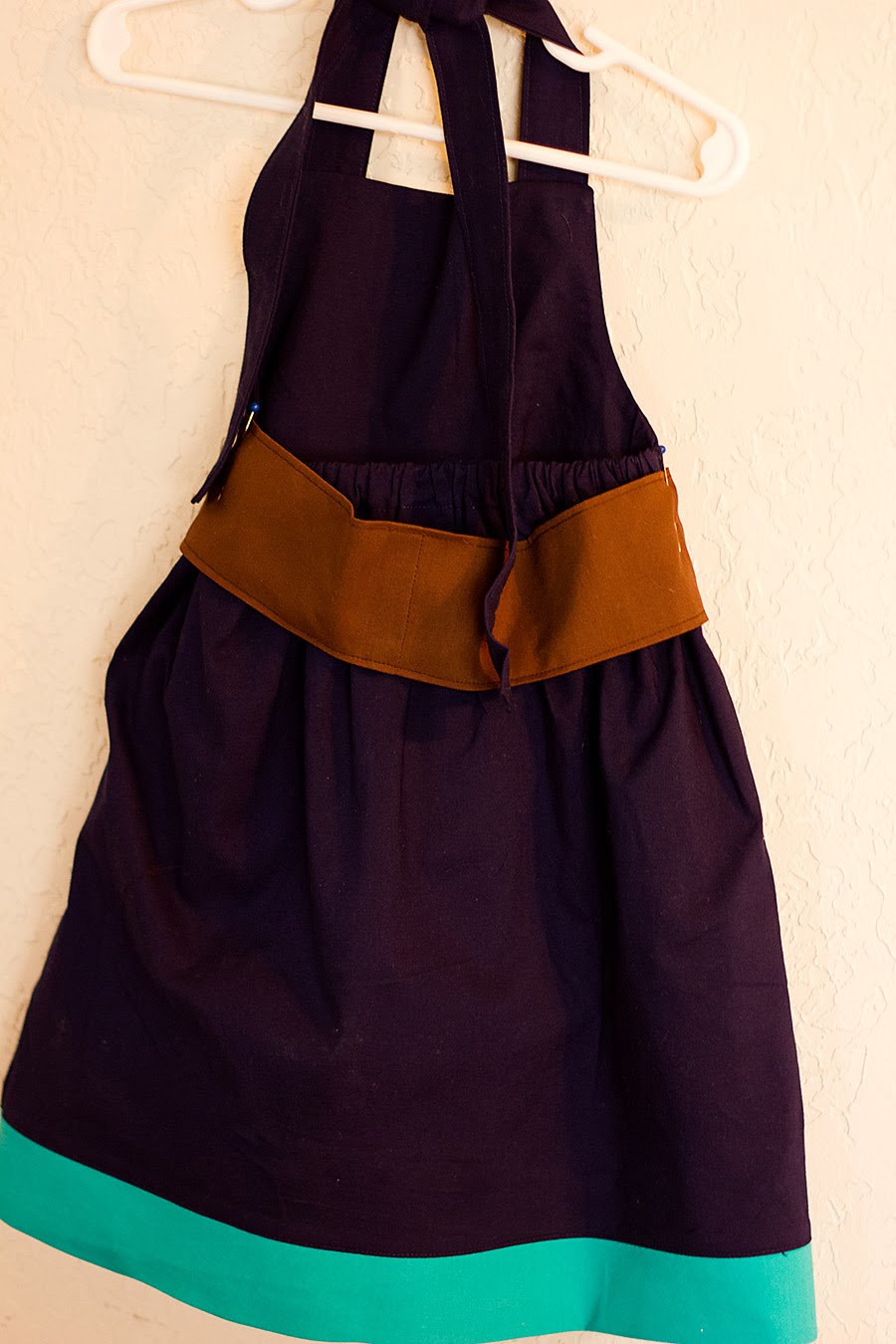 The lighting was really, really bad today being it was rainy, so I apologize for the grainy pictures, and also I apparently need to go back to ironing school. 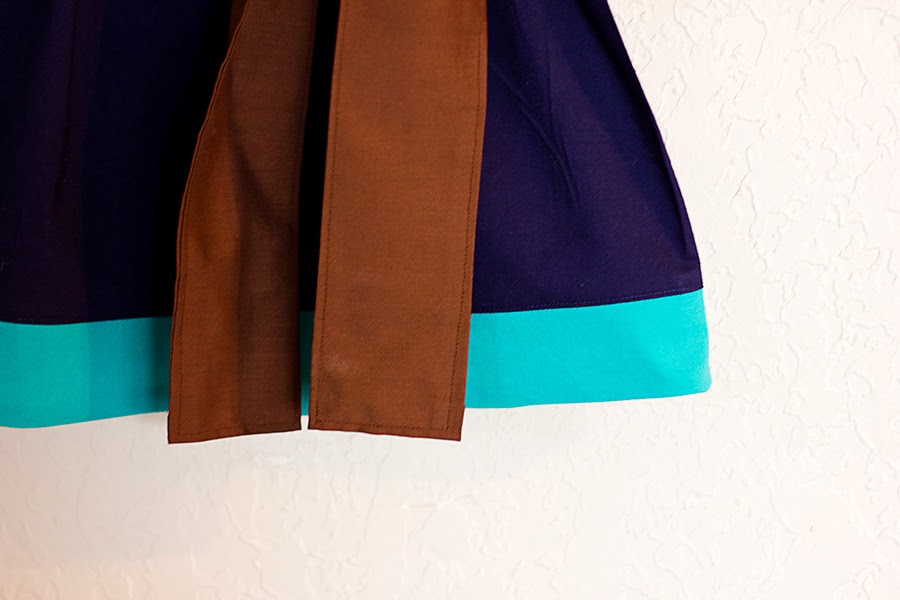 Next up: Minnie appliqued shirts and tiered twirly skirts.
Posted by brittney at 4:54 PM 1 comment:

Email ThisBlogThis!Share to TwitterShare to FacebookShare to Pinterest
Labels: Disney, for others

My friend is taking a Disney Cruise, so she asked me to make her girls some outfits (and one for her niece's birthday who is also attending the cruise).

She found some outfits she liked on Pinterest and set me to the task of recreating them. 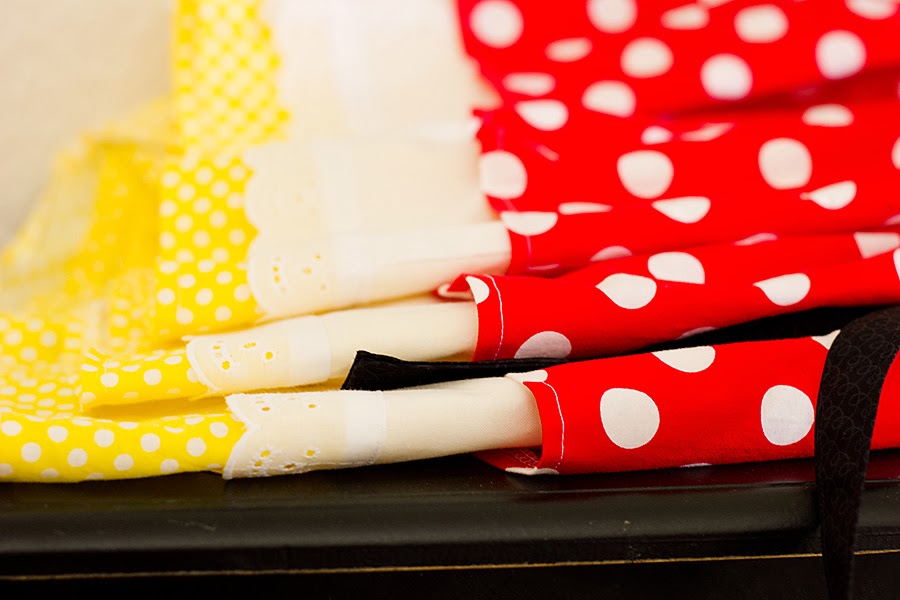 First up of the bunch are Minnie dresses.  There will also be a Merida inspired, pirate (I guess there is a special pirate night from what I can gather?), and another Minnie inspired shirt and skirt set. 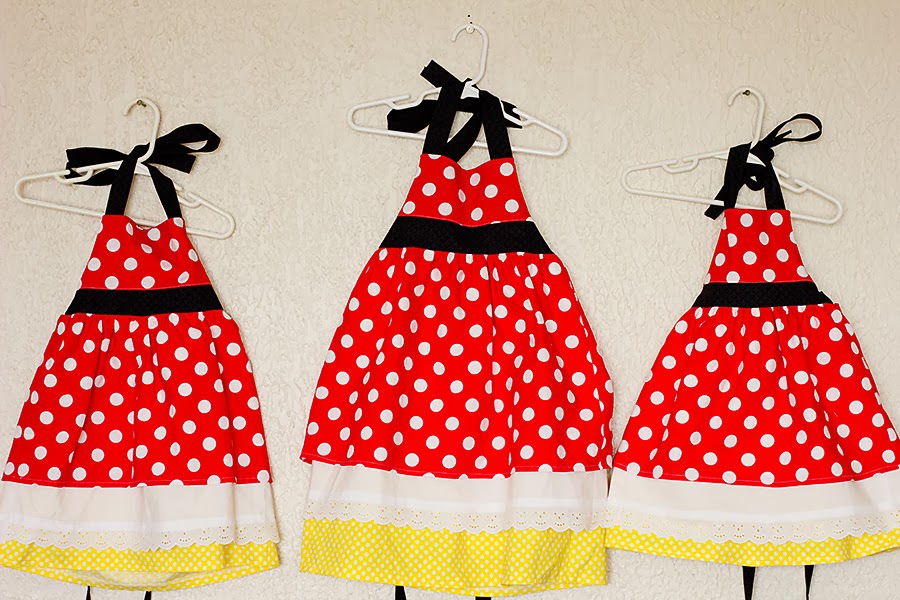 This is the set that included one for her niece.  The two on the outside are 12m and the middle is a 5T.  I really, really struggled with this pattern, it should have been a very simple sew and tops taken only a few hours.  I guess that is the scary thing about buying on Etsy, you never know what you are going to get, especially when you don't use a well known pattern maker.  Seriously, why can't Oliver + S make everything I could ever possibly think of sewing? HA! If only.

I made the first one (and luckily only cut one out at a time), ALL the measurements were terribly off.  So many things didn't line up, it took me a few hours just to re-do all the measurements and a lot of wasted fabric that shouldn't have been.  Sigh.  I feel bad saying such horrible things about a pattern, usually I can find one thing nice to say, but not with this one.  So, if you are buying a pattern that looks similar and you are worried, flickr mail or email me and I can tell you if it's the same one.  I left a bad review on her Etsy site and it looks like going back a year or so I was the only one to leave a review AFTER making the dress, most reviewed based on her just "sending out the pattern fast" or that they "can't wait to make the adorable dress".  Sigh.

The Brave inspired dress will also be from this pattern, but after I re did all the measurements I figured why not, right?  I've already done half the work! 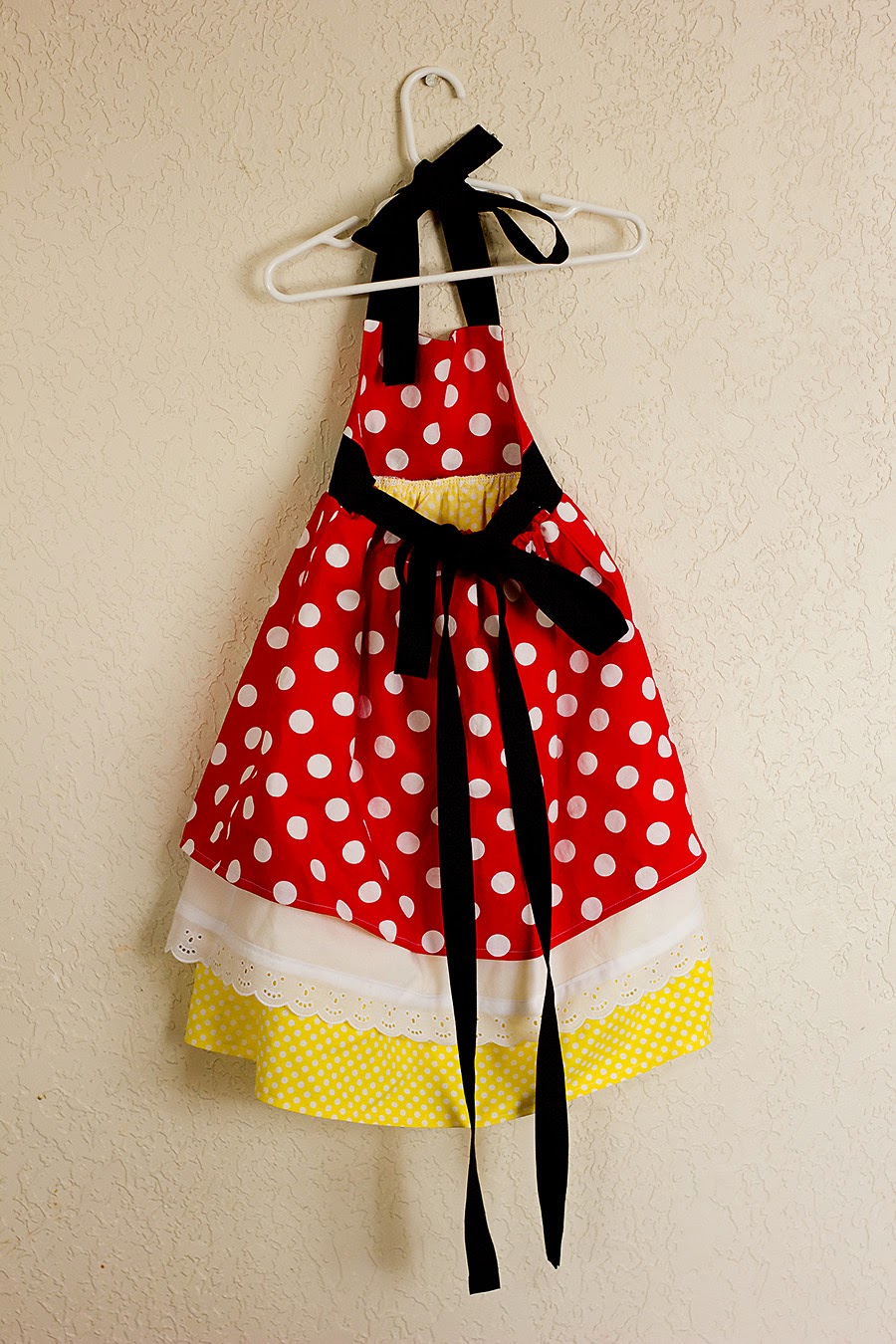 So back to the dress.  The one she liked had a cross over strap, but not having the kids here to measure and fit along the way and struggling to find a cross strap pattern I chose to go with the halter strap option.  (turns out this pattern did have the cross strap, but I was again nervous that being the measurements were off everywhere else, they would be there too, and a halter is a safer option).  There is elastic in the back to give it a nice shape and I added an extra layer to the skirt and the ties at the side. 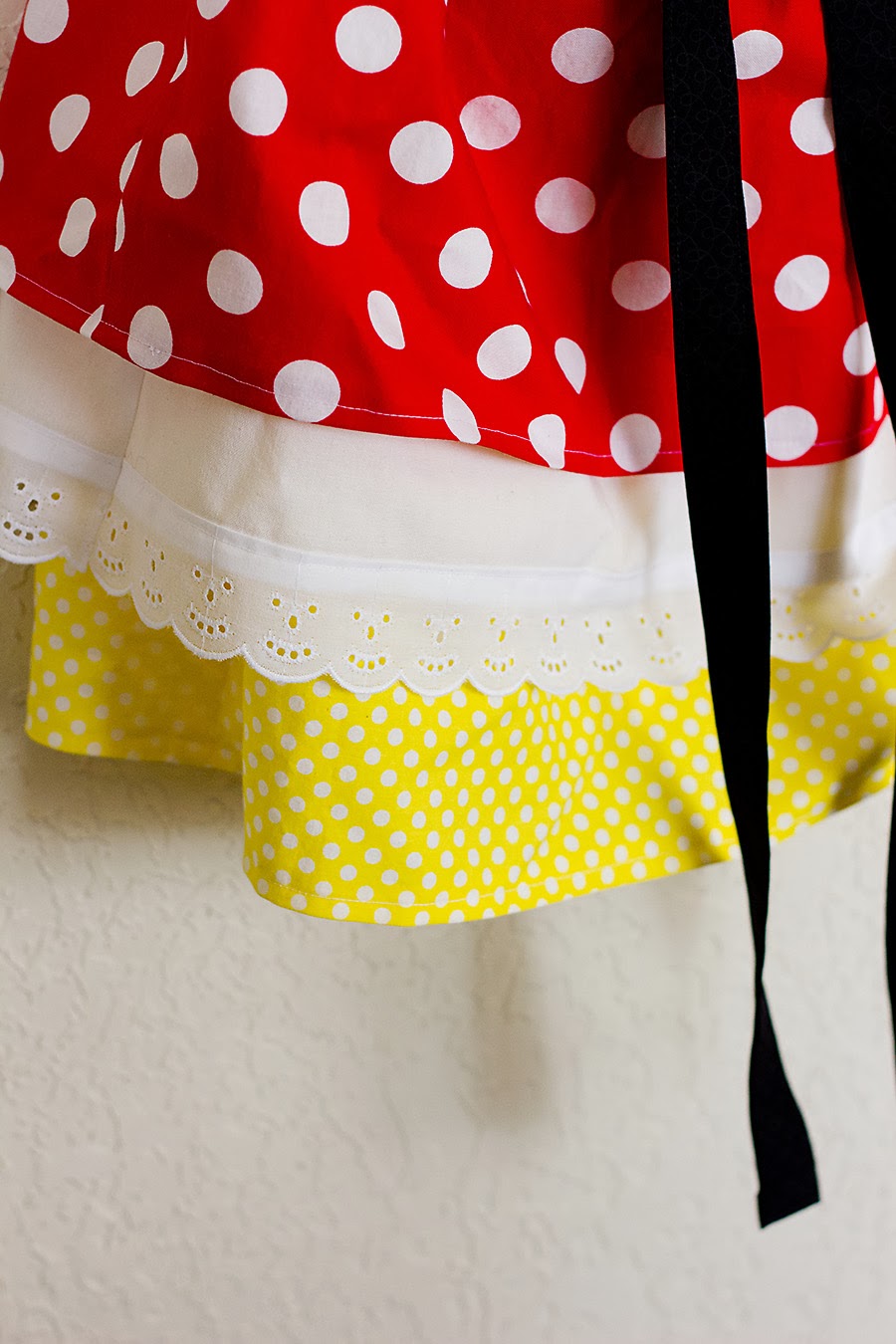 The dresses were a lot of work, but I hope she likes them because I think the girls will be adorable in them!
Posted by brittney at 5:01 PM 6 comments:

Email ThisBlogThis!Share to TwitterShare to FacebookShare to Pinterest
Labels: for others

It's a boy!! I am a day shy of half way and we just found out today our final count will be 3-2, Abby is especially excited as she wont be sharing a room "with a screaming baby".  Here's to hoping he isn't a screamer!  Jack is super excited to have a brother to teach how to be a boy and share his toys (really, share?).

I guess it's time for a name change on the blog! 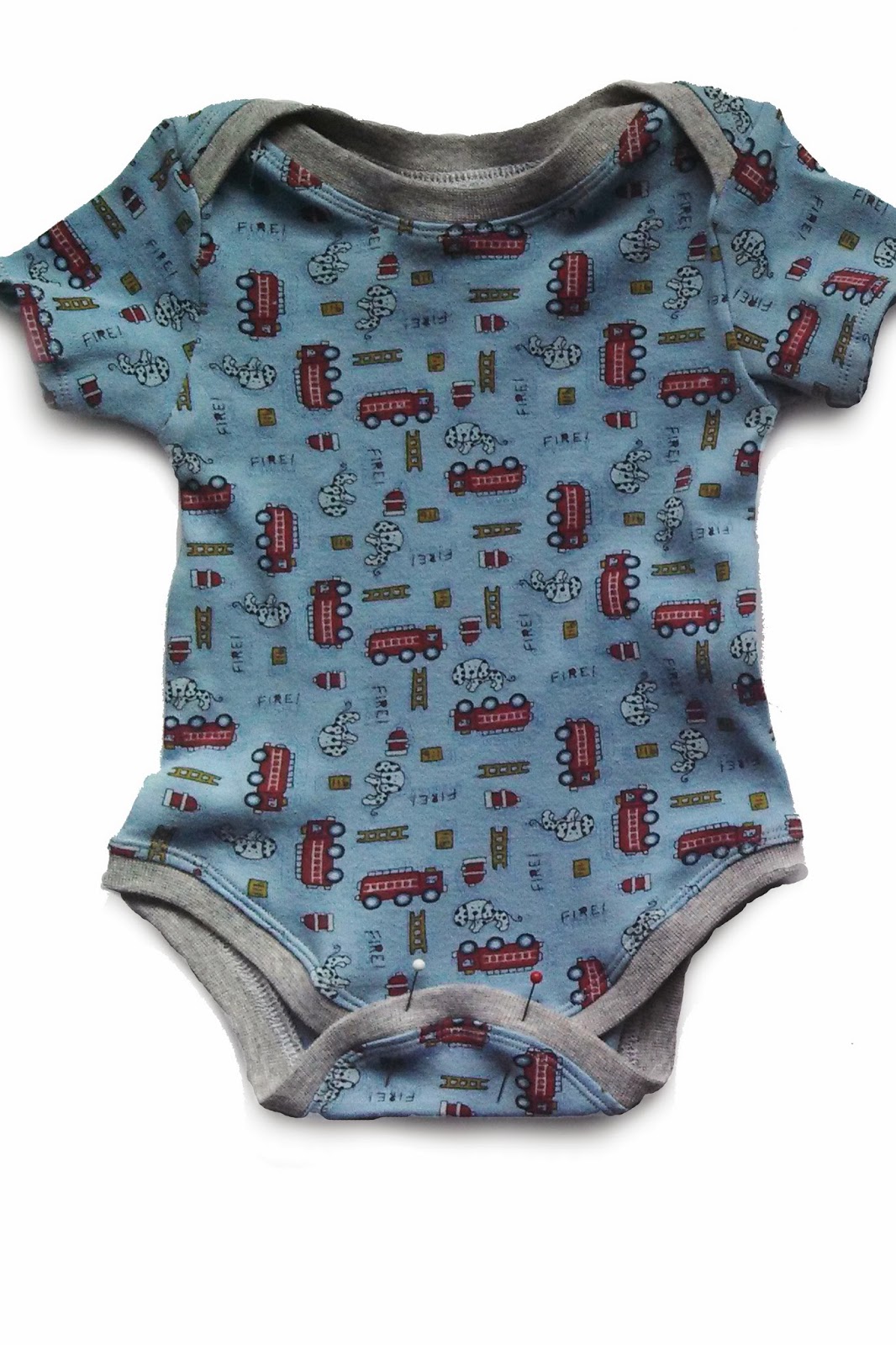 So being the weirdo excited mom that I am, I came home immediately after the appointment and made him his first little onesie!  I used the peekaboo patterns bodysuit pattern, I definitely recommend this one, it was such a quick and satisfying sew (though I haven't yet added the snaps).  I made the three month size that should fit from about 8-12 pounds, my babies are crazy big so that should be about right for his first few months (possibly just the first month?).   Consider baby boy sewing added to "the list"!
Posted by brittney at 6:34 PM 18 comments:

Email ThisBlogThis!Share to TwitterShare to FacebookShare to Pinterest
Labels: for Sam, peek-a-boo patterns

Today at kindy was "dress like a 100 year old day" for the kids 100th day in school.  In typical me fashion, I forgot about that until yesterday.  Awesome.  I made a run to the store earlier in the day for suspender supplies but didn't get to sewing until after all the kids were in bed, but hey, it was finished! 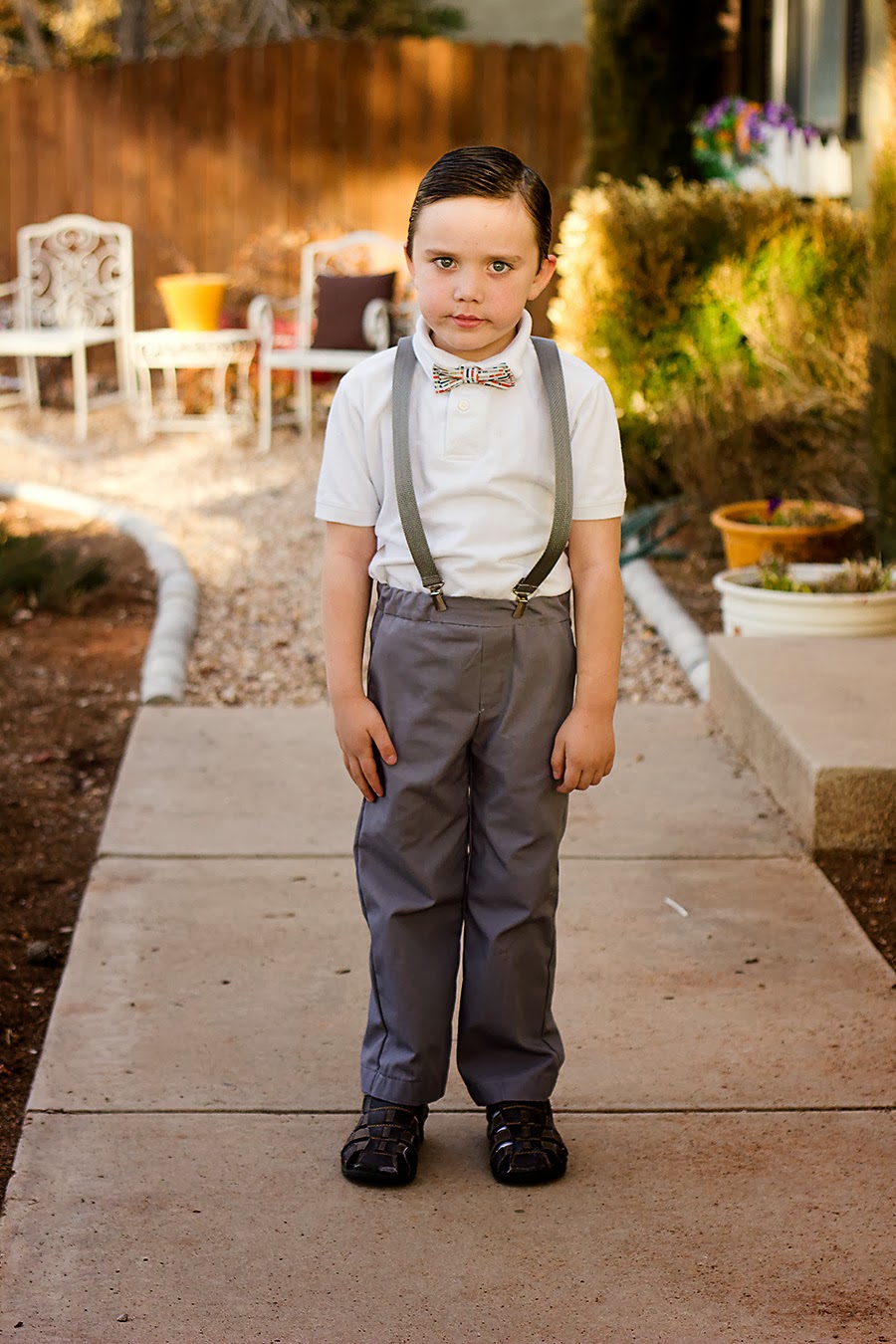 I made him the Oliver + S Art Museum trousers size 5, suspenders and used this tutorial for the bow tie.

For the suspenders I read a few tutorials online then just kind of winged it, I did shorten them a bit after this picture but my flipping lens was acting up and only focusing 1 out of 10 times and I couldn't even move it to use manual instead of auto focus.  Sigh.

For the bow tie I used her pattern for the bow but lengthened the tie around his neck as her pattern is for infants/toddler.  I probably could have made the bow bigger too, but he was pretty against ever wearing it again so it will probably be passed to my nephew after this (if his mom wants it, that is). 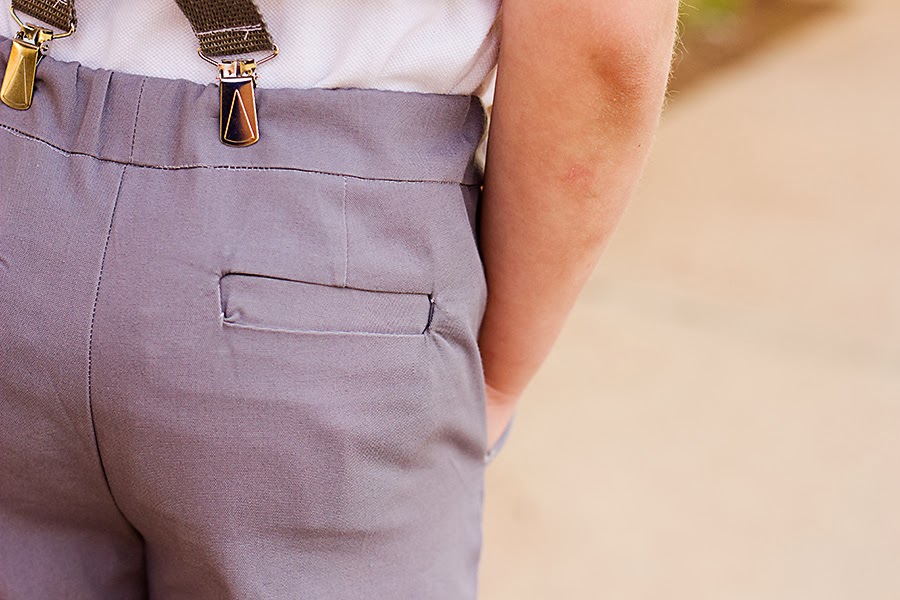 The pants.  Oh I am so excited I managed to pull the welt pockets off!  Okay, okay, they aren't perfect, but for my first pair of them I am going to say it was a good effort.  Seriously, if you don't have this pattern, you need it just for the welt pocket instructions!! You have done it again, Liesl.

I left the belt loops off due to it being after midnight, but I kind of wish I hadn't.  Oh well, next time. 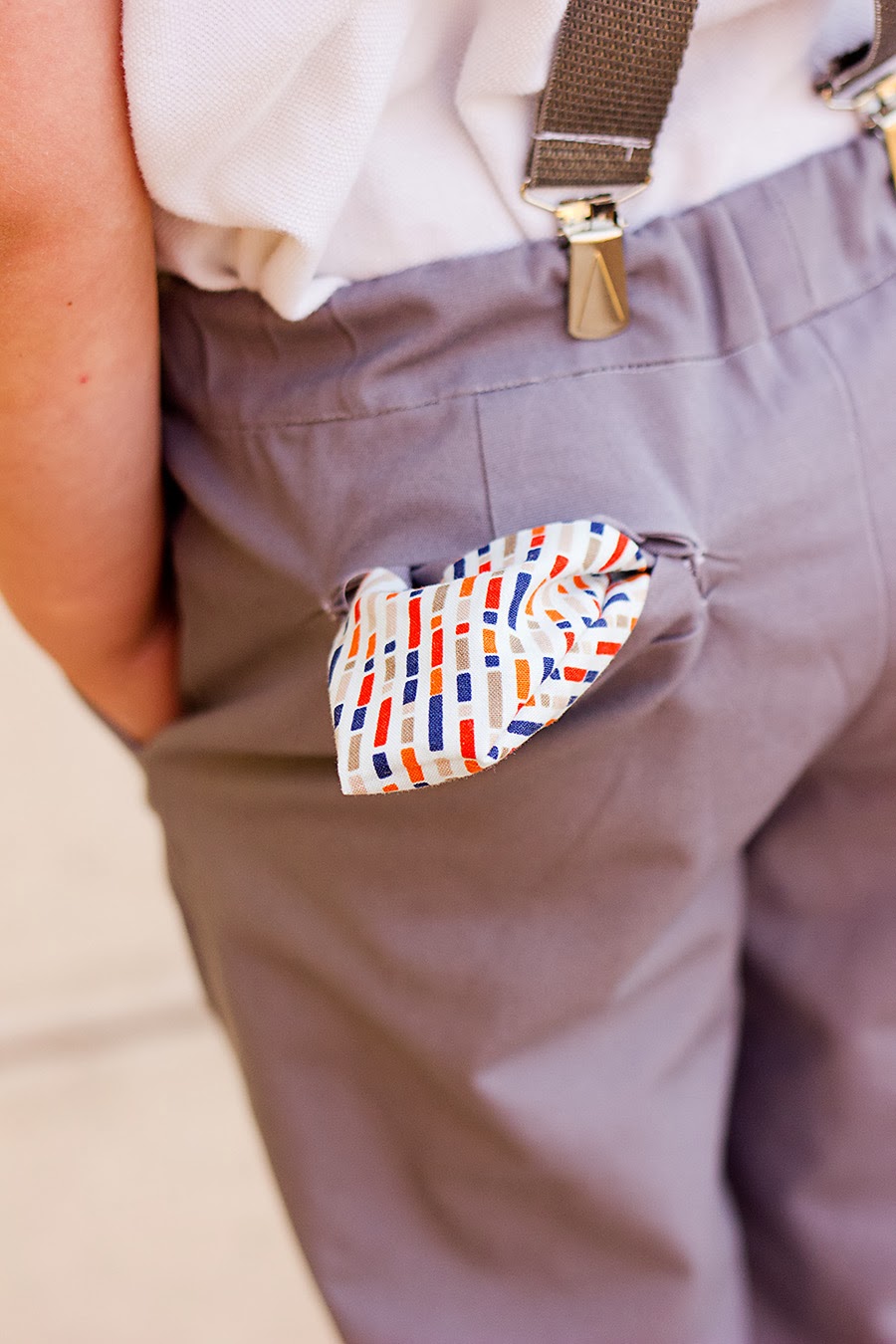 I used the same fabric from the bow tie for the pocket linings and the waistband linings.  This boy appreciates nice details.  In fact, one time I didn't use a "fun" fabric for the linings and he complained, ha!  I love this kid.

He wasn't thrilled at having his shirt tucked in ("Whhhhyyy?!") and "I feel like I am going to church" was his other comment, but I think he looks pretty cute handsome.
Posted by brittney at 9:35 AM 3 comments: