A lot has been going on in our family's life these last few weeks.  Sadly for me, though, not much sewing has been happening:)

We had an amazing opportunity to purchase a home a few doors away from Ben's parents and have been having a major headache waiting for the lawyers (it is being sold by someone going through bankruptcy, so we have had to deal with the court system) and the loan company in general.  Like how we had a closing date last week until it was noticed the previous owners took the stove and we had to wait on a second appraisal, this time with a stove in the house.  Nice.  So we had to be out of our other home before the new one closed (still waiting on that, grrr.) and Ben's grandparents generously let us move in to their winter home while we are waiting.  (They live in England and come to the States in January for a few months).  So we packed and moved nearly all of our belongings in to their garage, aside from things from our yard.  Thinking we would be remodeling (the place is a mess and in desperate need of new carpet, tile, paint, fixtures- everything) I packed away ALL my sewing things.  When it became clear we were no where near closing I dug through the boxes in search of my machines.  Ben came out while I was looking and laughed "you must REALLY want to sew." Yes, yes I do.   I found my machines, patterns, knit and denim/twill boxes.  I can see my cotton but am not dedicated enough to dig to the bottom of that stack.

Before I get to the sewing, here is some more we have been doing this last bit: 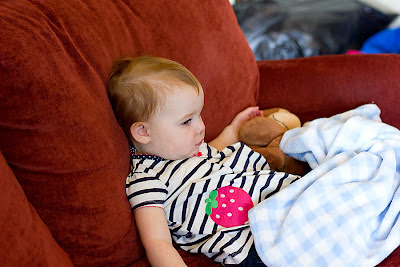 The twins have been absolutely miserable for about two weeks now.  I thought they were getting better, but no.  So they have been doing lots of sitting on the couch, and fighting over my lap. 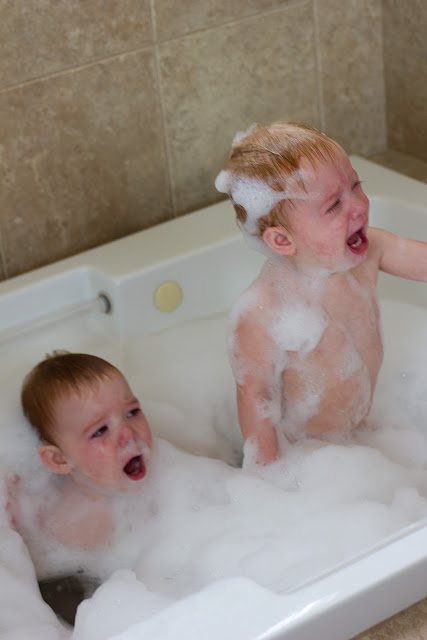 They had their first bubble bath, and hated every second of it. 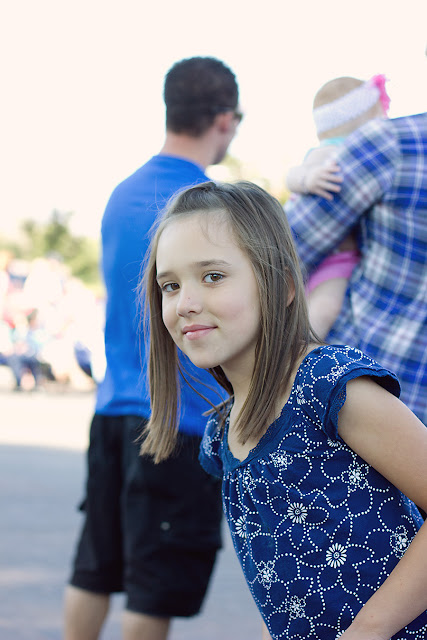 Miss Abby started her new school, and it has been wonderful!  She had great kindy and first grade teachers, but a horrible second grade teacher.  This woman hated kids.  I had such a hard time with her and the few interactions we had.  She was quite hard on Abby and as a Mom it upset me.  Her new teacher is AMAZING.  She has started to come home from school happy again, and excited to go the next day. 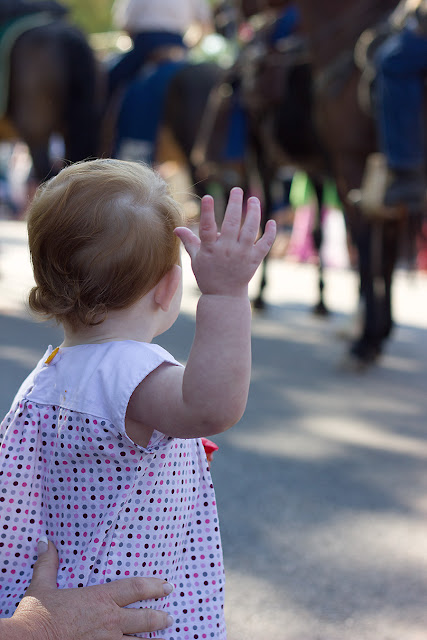 We have been taking lots of walks, playing in the backyard and went to the town heritage celebration on Saturday.  (Both wearing their Ice cream dresses).  Izzy LOVED the parade.  Could have been all the candy Grandma was giving her... she waved at the floats and horses:) 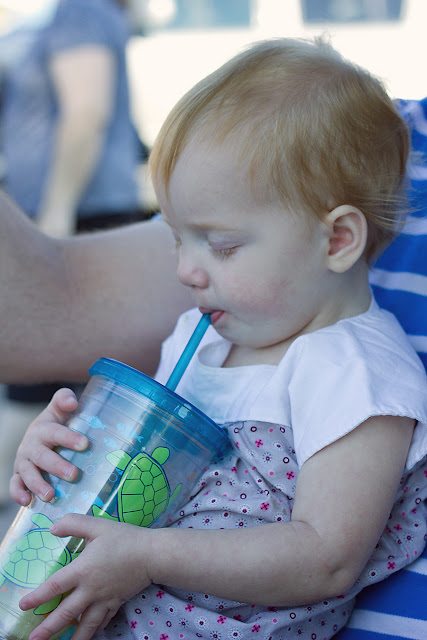 George was less than impressed.  It started way late and lasted FOREVER.  She hung out on my lap part of the time and when she became impossible Grandpa and Daddy took her to play in the Rhino. 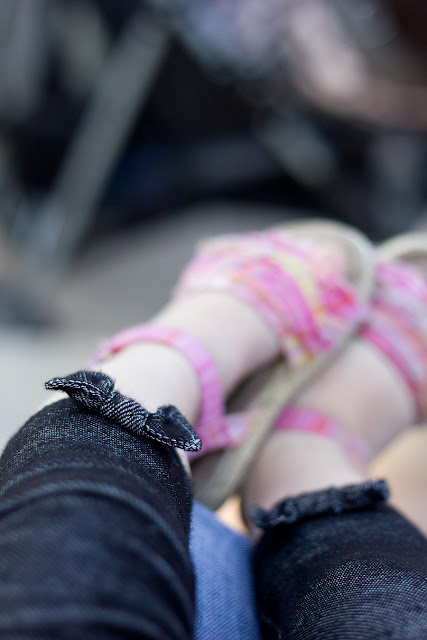 Georgia also wore her new leggings at the parade. 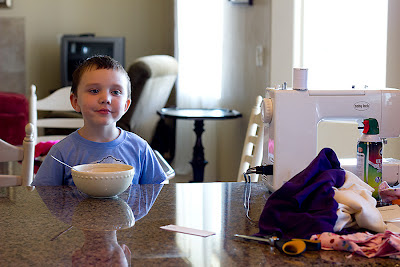 One naptime I finally got the house clean, laundry done, Jack happy and sewing things found and got to work.  Before we moved I made the peek-a-boo patterns pj bottoms.  I was excited to see it as I had been thinking of something like them for a bit, but I was too lazy (as usual) to figure them out on my own.  I had a pattern that was similar but it is much easier to have it done for me. 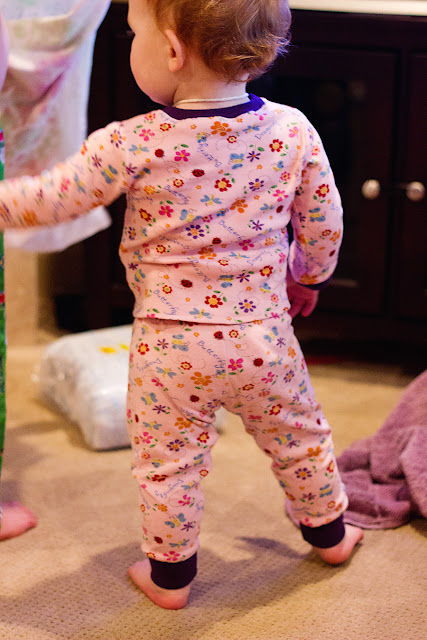 The pattern also comes with a top, but  I chose to go with the skinny tee since I have made it so many times and knew I like the fit.  Can't really see it on Izzy's but there are purple cuffs on the sleeves. 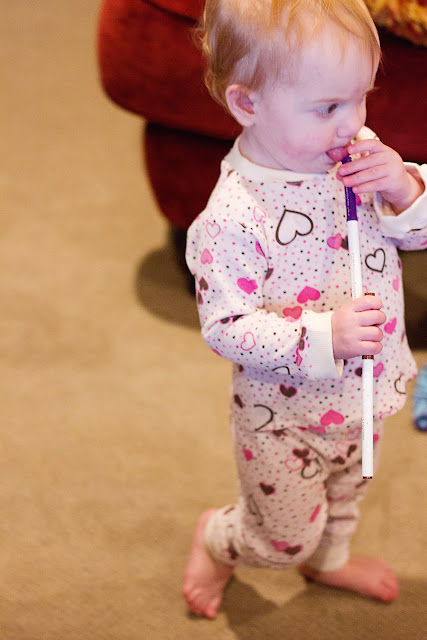 On the pants I went tighter with the cuffs than the pattern said, because that is the look I wanted.  I didn't think very hard when I made the top, I really should have done the same for the top as it is really loose on Georgia's wrists.  Still super cute and comfy though. 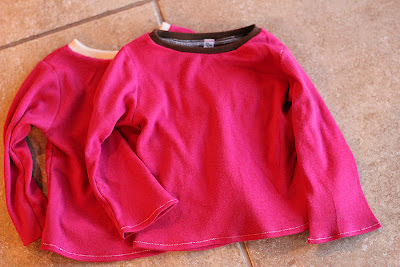 I also made two extra tops to go with their previous pj pants.  I have more plans, though I hope to be remodeling rather than sewing very, very soon:)
Posted by brittney at 11:55 PM 4 comments:

So what have I done with my Ottobre subscription? Not much, ha! Other than the one dress I made my magazines have sat in the corner. And I may have misplaced a few of the pattern sheets.  Oops.  So today I got out the 4/2012 meaning to make Abby leggings, but I ended up making a pair for the twins.  Well, turns out just small one.
I made #2 Rainy sky with some jegging material I have had for ages.  I made hip size 68 with the length of 74.  They fit pretty good on George, but they are pretty tight at the ankles so there is no way they would stretch over Izzy's cute chubby feet.  It was a close one even with George.  But, that is my fault, I should have paid more attention and widened that bit.  Come to think of it, the fact that I forgot to add seam allowance probably paid a huge role in the fit at the ankle...
﻿ 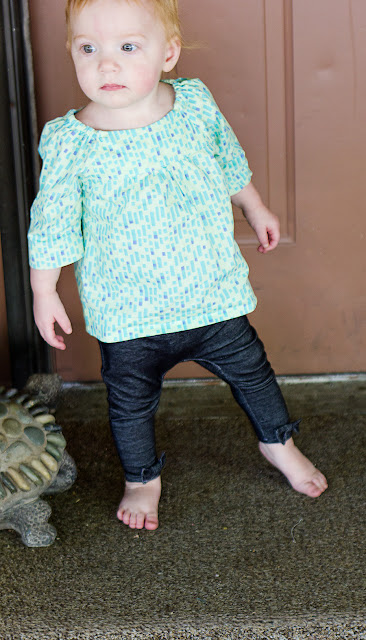 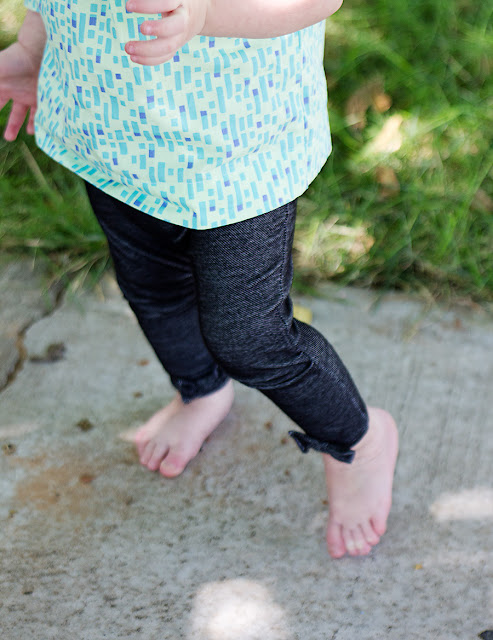 Oh how I love these.  I have like 3 yards or so, so I will likely make another pair a bit bigger for Elizabeth.  Also, I did the elastic waistband before I tried it on either of them, so I made it right for Izzy (so big on George) and since it wont fit Iz I should take the elastic in a bit.  But we shall see, I am not really that bothered:) 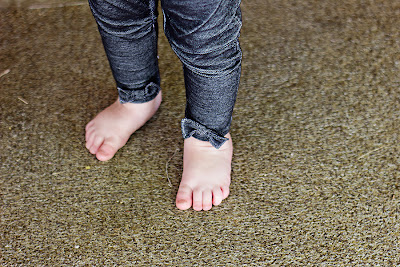 What really sold me was the gathered knees and little bows on the ankles. AAH! So much cuteness!!
Posted by brittney at 4:04 PM 6 comments:

Email ThisBlogThis!Share to TwitterShare to FacebookShare to Pinterest
Labels: for the twins, leggings, Ottobre

I know you have all been waiting on pins and needles since my last post (only joking).  But I finally got the time to sit down and blog how I made it! I made a 12 month this go around (p.s. if you forgot it is the Secret Agent Trench pattern we are working with:) so you will likely need to adjust my measurements if you are making a larger size.  Using view B I started by subtracting 1 1/2" from the bottom of pattern pieces 10 & 3 and added 1 1/2" to pieces 11 & 12.  I did this to eliminate the drop waist.  I just guessed at the amount to take off since the twins are wiggly and for some reason didn't want to hold still while I figured it out. 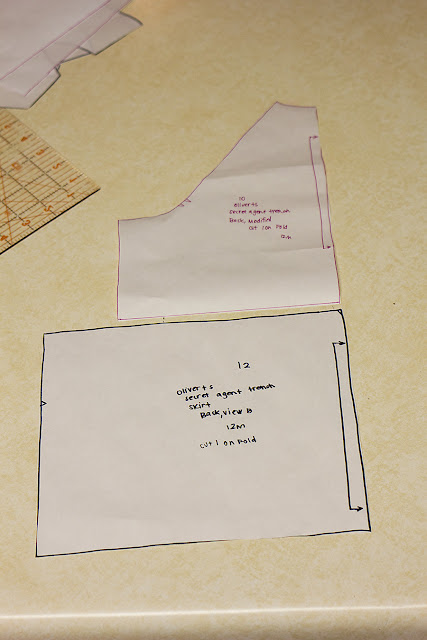 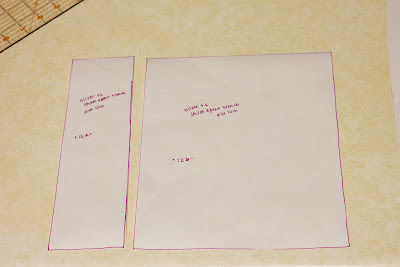 And you now have two pieces for 12 instead of one.  Oh, and don't do like I did and forget to mark to cut your larger piece on the fold.  You will end up having to cut a new piece and doing the happy dance  you just happened to buy a little extra.  Cut two of the narrow panels and one of the wider panel on the fold. 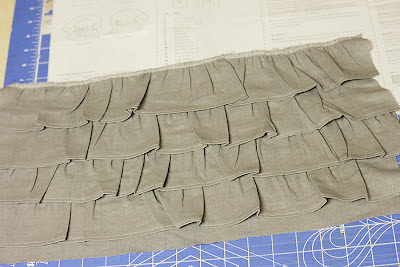 I wanted 4 layers of ruffles so I cut out 3 1/2" strips, serged, hemmed and gathered.  Attach the ruffles to your wide panel, lining up the first ruffle with the top of your panel.  I spaced mine 2" apart. 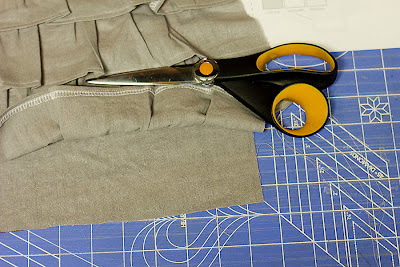 Make sure you leave 1 1/2" free on the bottom of the panel for hemming later on. 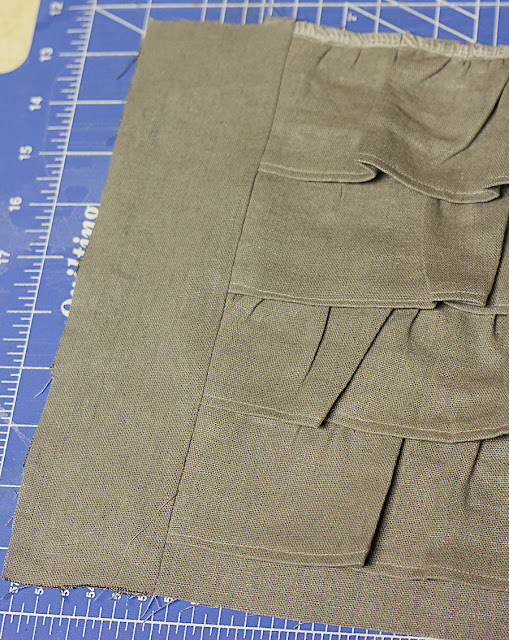 Then sew the two narrow panels on either side of the ruffle panel.  This should now measure the same as the original pattern piece 12. 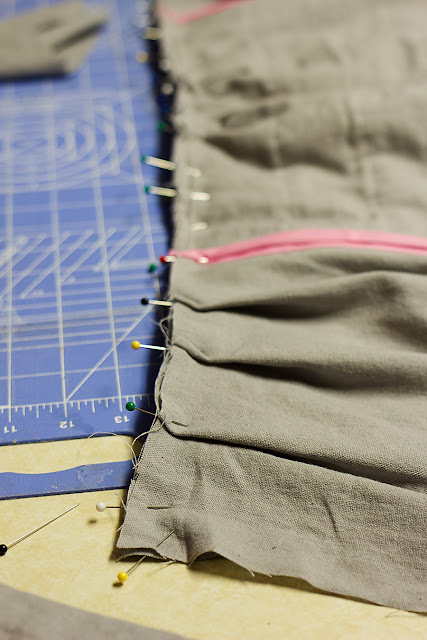 I pleated the narrow piece of 12 to match the back of piece 10 (the back bodice), then pleated the front of the skirt.  You could also gather instead.

Then I followed the Oliver and S instructions from there! 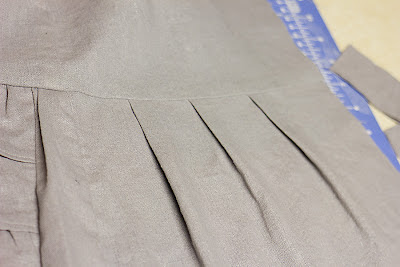 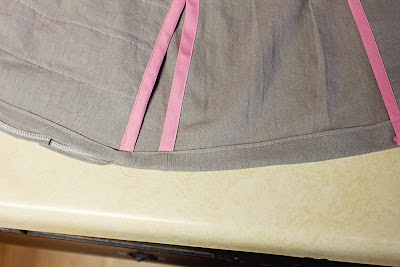 Be very careful when hemming so you don't catch the ruffle in the hem.  I went from the 1 1/2" hem as instructed and narrowed it down as I reached the ruffle panel.  I sewed right up to the ruffles, lifted the foot and sewed on the other side.  Then hand stitched a few stitches on the bit that I skipped. 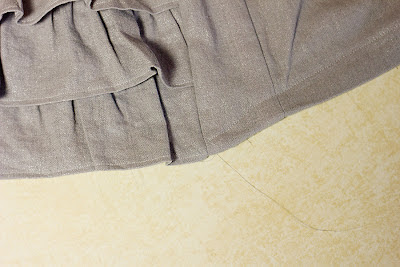 The hem isn't as neat as I would like, but it works.  The grey thread I used is a near perfect match so you can't really see it in real life:) 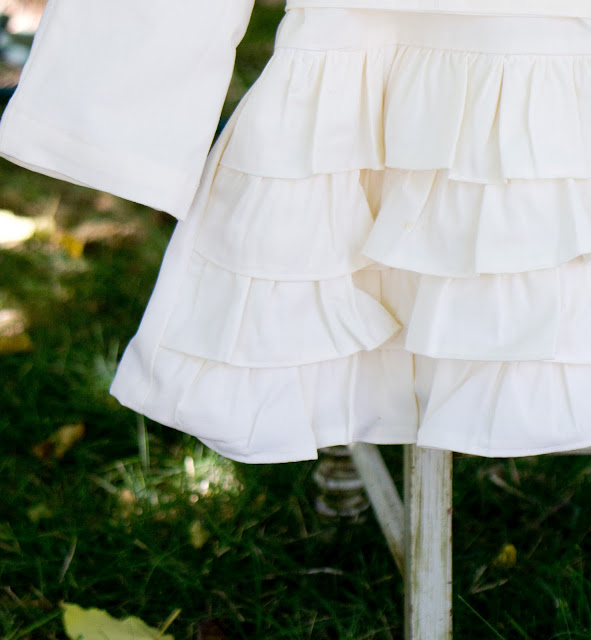 See the corner?  That is what happens if you catch the ruffle in the hem.  I will be unpicking this... eventually, it is 18 month so too big for now. 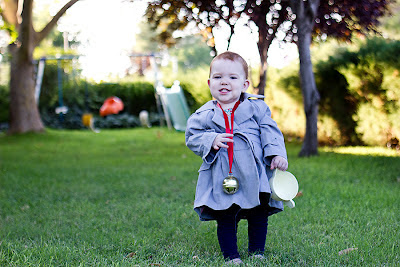 Then try it on your little cutie. 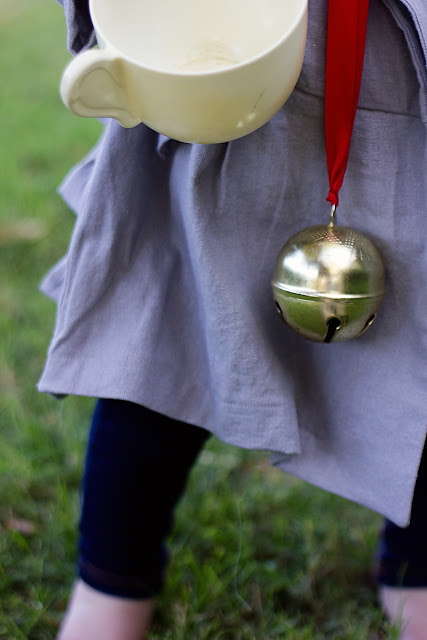 And smile as she accessorizes herself. 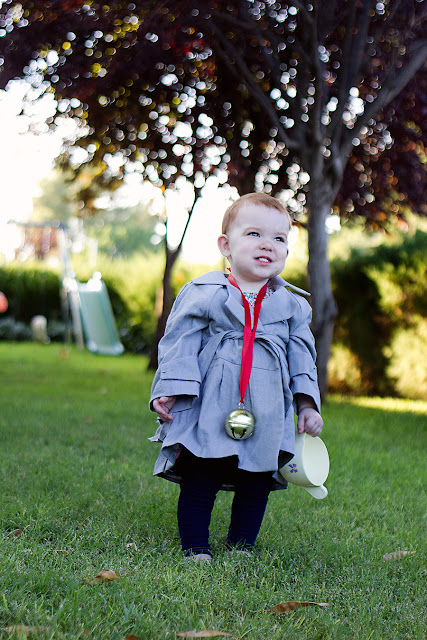 And gives you cheesy faces. 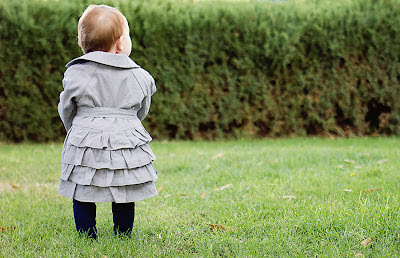 Tada! You have yourself a super cute ruffle trench! Now if only it were coat weather...


If I wasn't clear enough or you have any questions, leave a comment and I will get back to you!! Oh, and make sure to add yours to the O+S flickr group!

P.S. When I took these photos I still needed to add belt loops and buttons... they are now on! :)
Posted by brittney at 10:51 PM 9 comments: