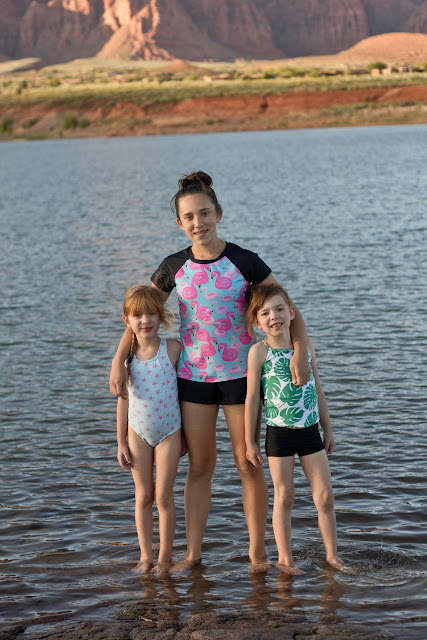 I recently made swimsuits for 4 of my kids, meant to do 5 but the baby's will have to wait, ha! 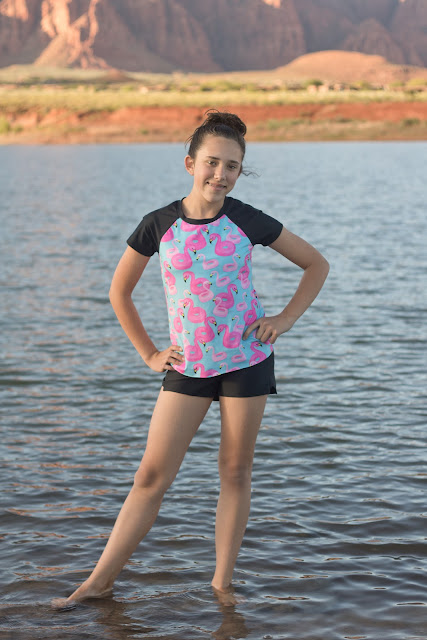 Abby is at that hard stage, she's very particular on what she likes and what she's willing to wear.  She LOVES rash guards and boy shorts, so I figured this combo was sure to win her over.  She also chose the main fabric, so that didn't hurt either.

For the rashie I used my favorite shirt pattern for her.  I have bought a rashie pattern in the past and realized it was basically a slim tee with a taller neckband.  I usually choose not to do the taller neckband because I don't like the look of the way it flops, but if you want more sun coverage you can just add some height.

The Hey June Camden Raglan was perfect for the task.  I did add a partial lining to the front that goes a little below the armscye, I just layed the wrong side of my main fabric and wrong side of my lining together and treated it as one.  I probably could have figured out a way to add some elastic to the bottom of the lining to keep it down, but for now she didn't seem to mind. She says it's very comfortable and her favorite rashie yet. 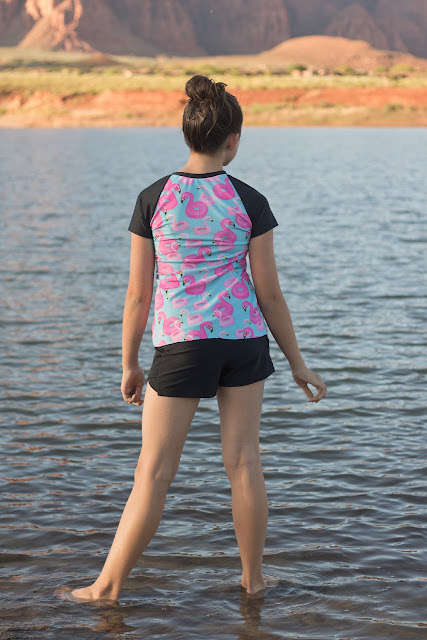 The bottoms are the Jalie Swim Shorts.  The pattern has a great value, with 27 sizes included in one pattern.  But  that also came at a price so to speak, there are no layers and at times it was difficult to discern my size line.

Once it was cut, though, it was smooth sailing.  The instructions are well written, very to the point which I really like.  The shorts are lined with a bikini style bottom, again she said she really likes these and would want another pair in the future. 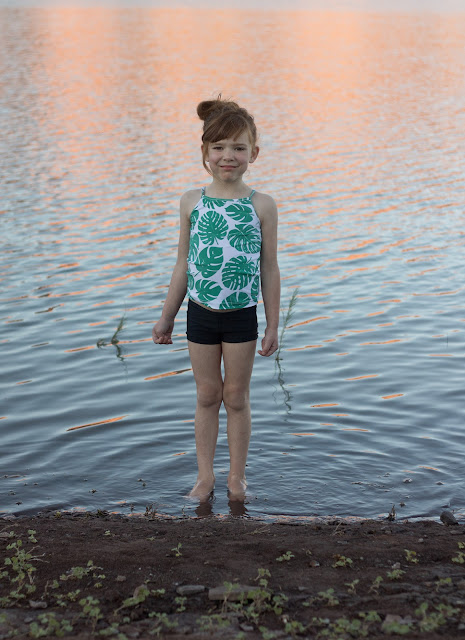 I made this adorable little set with the Boo Designs Swimmers.  This is definitely a favorite swim pattern of mine, I've tried many, many swim patterns and this one gets my highest recommendation.  It's drafted well, instructions are great and it actually tells you to use elastic in the straps and other places it needs it, unlike other patterns.  There are also loads of views included. 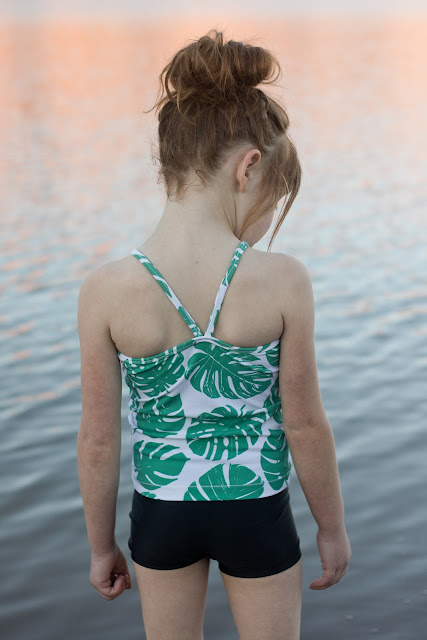 For this one, I chose the tankini and boy shorts.  The bottoms come with an optional lining, that I always choose to use because no one wants unsightly camel toe, not even a kid.

The palm fabric from this top, the starfish and sharks (boardshort) below are all from Raspberry Creek Fabric, she just got in to the swim fabric game and I have to say, it exceeded my expectations.  It is nice and thick and as easy as swim knit can be to sew.  My machine hates the shiny swim for whatever reason, ha! I have bought from other custom swim places and the base is thin, this one is nice and thick and so I chose not to line the top even though it is white. 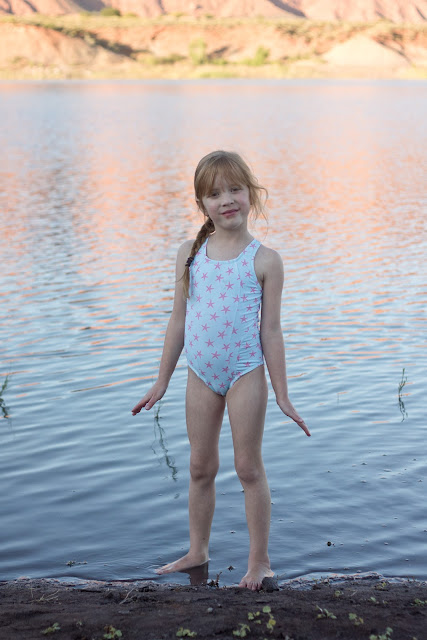 I have been eyeing this Jalie Racerback for quite some time.  Again, it has 27 sizes in one, so fabulous value.  This one at least has the adult and kid sizes separated in to two separate files, which made it a little easier to cut my size, but still no layers. 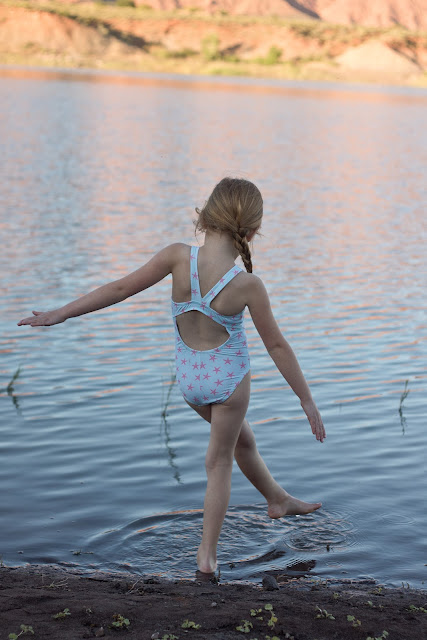 This pattern did not disappoint, I was very, very happy with my end result!

If you're interested in any Jalie patterns, on their website you can download the instructions and take a peek before you buy a pattern, I thought that was pretty cool. 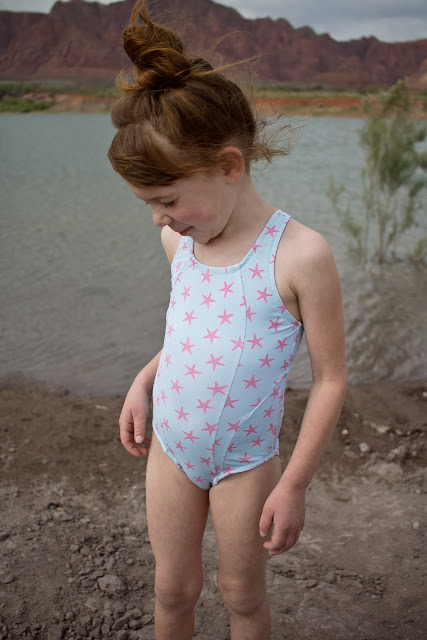 I actually went out more than once, maybe more than twice (shhhhh!) to try for photos, that's what I get for not wanting to wait for the golden hour.  So the last time we went out (all the photos above) George and Izzy wanted to switch suits, hence the child changing in the suit.

I just love the lines on this suit, It would be adorable in two fabrics to show them off even more. 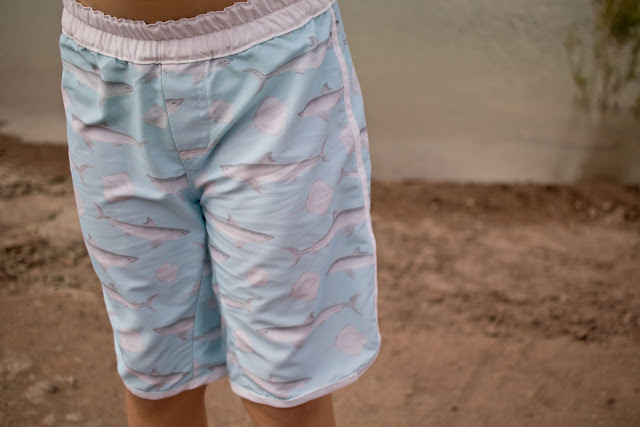 This pair, I hesitated to include it.  I chose the Gracious Threads Swim and Surf Shorts for my shark obsessed boy.  As it turns out, they ended up too tight because they are drafted for girls.  There was no indication of that on the website or pattern listing, so I was quite disappointed.  The only way I found out was through a post on Facebook where the designer confirmed it.

The pattern itself went together alright.  I really like the way the bias tape is done, it makes it less bulky as it isn't overlapped except for a very small part where you hide the raw edge. I liked the lining, I used regular swim knit instead of lining (I think she mentions to in the pattern, can't remember) because swim lining is very thin and doesn't give any support.  I actually line all my suits with regular swim. I had major problems with the waistband elastic, though.  You're instructed to sew 1/8" from the top, then 1/2" down and 1/2" below that.  I chose to follow the 1/8" but then split the difference in the remaining waistband at 3/4".   I used 1/2" elastic and could barely thread it through, my hands were so sore by the end, ha!

So I grabbed some more of these sharks and the other boardshort print offered by Raspberry Creek and am on the look out for a better boardshort pattern.  Maybe just a regular short with a lining? 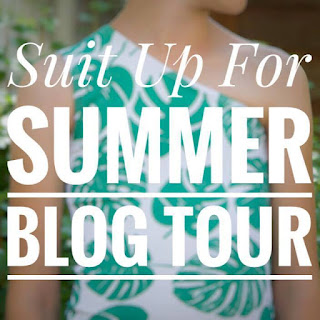 This post was written to be a part of the Suit up for Summer Blog Tour, but all opinions are 100% my own and I was going to make them all suits any way, haha! But if you want to check out other posts that review other swim patterns, check out the links below. And rumor has it, the giveaway is pretty rad.

Email ThisBlogThis!Share to TwitterShare to FacebookShare to Pinterest
Labels: boo designs, for Abby, for Jack, for the twins, hey june, jalie, swimsuit