I wanted to try the Parsley Pants pattern again since in the group of testers mine were the only ones who fit perfect the first time, Abby could have gone with the 7 (and I tried the 6) so that was expected, but Jack's were perfect and I was baffled as the other tester's came back a bit big and a little was taken off of the final pattern piece to make them more of a slim fit.  Rae and I thought maybe it was because of the material I used (gingham, it was a little slippery).  So this time I used a bottom weight, I *think* it was a lightweight denim, but I bought it so long ago I can't remember anymore, ha!   So these are a size 4 in the original pattern pieces we were given.
﻿ 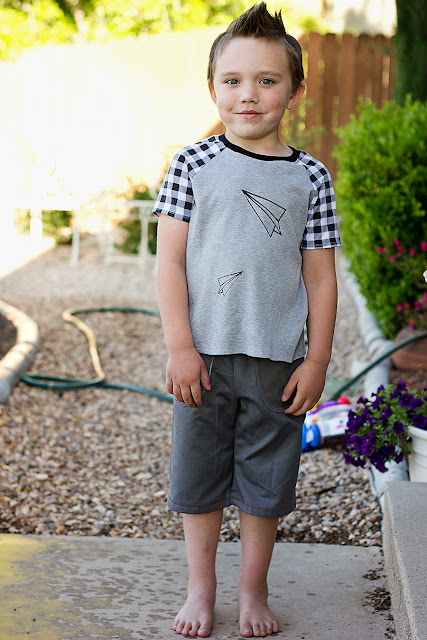 I think it was just the material, these are a little more roomy than the first pair.  I just randomly picked a spot to shorten the pattern and really like the length they ended up.

Since his Angry Bird shirt was in the wash this morning, he chose a different shirt from yesterday, and he is going camping with his Grandparents tonight and tomorrow so I think I will just send him his sunglasses one so he has to wear it at least once, haha!  Plus, he told me, "gray matches gray, so I match!" 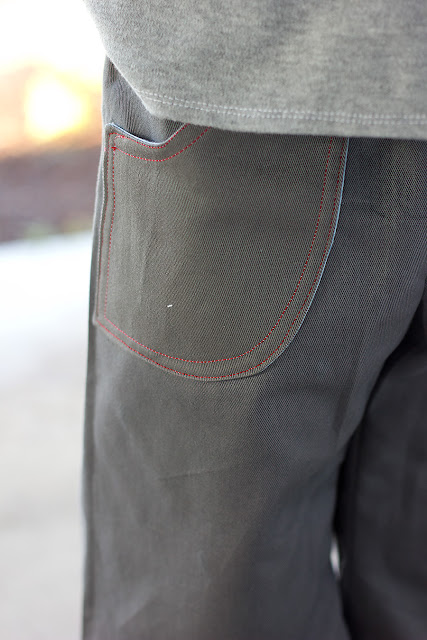 I used red thread to topstitch for something a little difference, he is excited because it "Matches my red Angry Birds shirt!!"  See? Told you he is all about the Angry Birds right now... (I used  red thread for the hems on the shirt).  I also lined the pockets with some cotton material that is blue and has trains, cars and motorcycles on it.  I couldn't pull it out far enough to get a picture, so you'll just have to use your imaginations, haha!

If you have ever read my blog for more than a second you can probably tell I am super picky about my patterns, and usually wont even touch pdf's, but I can't recommend Rae's patterns enough! I LOVE them.  Great instructions, easy to put together pattern, measurement charts so you can get the right fit.  So yeah, I pretty much recommend this pattern and having used her patterns before I would have bought it straight away if I wasn't a tester:)
Posted by brittney at 9:10 AM