Well, make that three! I took Alli's bridal photos earlier this week and got them edited. I nearly killed myself editing them that fast, a few very late nights, but Ben was out of town all week so I didn't have him distracting me with good tv shows:) Then I made the two badmiton tops I had cut out and waiting for me! Oh my goodness how I love them! I came late to the party so the Swingset was already out of print, so this fills the void (though if Swingset ever goes digital it is mine!!).

I used some scraps from the girls' Easter dresses. Score! I love using up every last bit of fabric possible... and I did... there was no more that could be used when I got through cutting them out. So in trying to use as much fabric as possible I made the 12m size because that is the largest size I could cut from my scraps. The girls are still very much in the 6m range, but they will grow someday, right? They are 10 months now and the smallest babies I have ever had. Abby and Jack were in 6m clothes by three months. 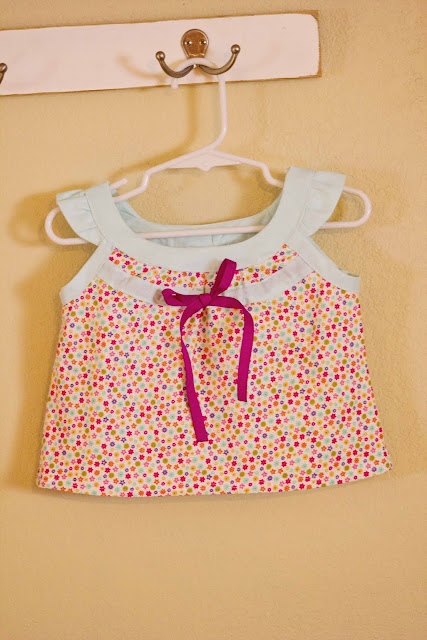 The first one I made I did to the letter. I like to make the first one exactly as the pattern says then I tend to deviate and use my techniques I am comfortable with, or switch details up. 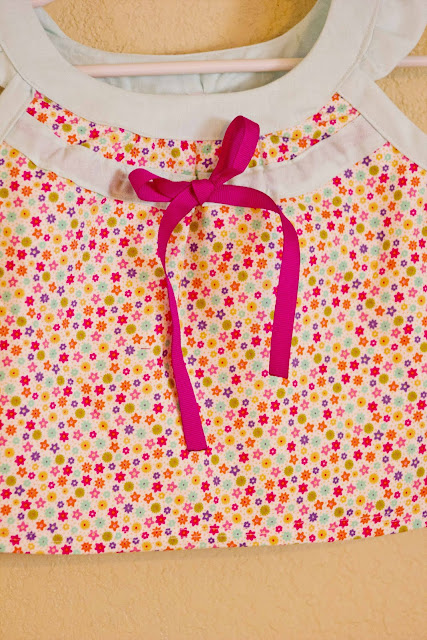 Close up of the ties and pattern. They are flowers on both tops but it is kind of hard to tell from far away. I used a lighter to singe the ends of the ribbon to keep it from fraying. 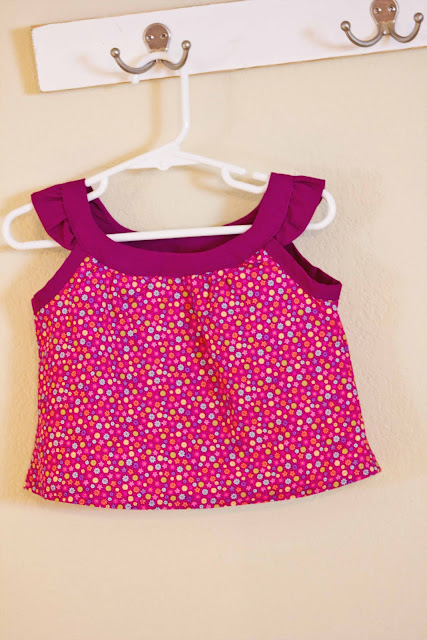 I could see the ties being a problem, since they both eat the ties on the 2+2 blouse and pick at each other's buttons on their birthday party dresses so I left them off the second one. I kind of wish I hadn't though, I think the ties are such a sweet detail. How cute would the top look with the scallops on the bottom? I think that will be what I try next time with this pattern.
Posted by brittney at 12:35 PM

Email ThisBlogThis!Share to TwitterShare to FacebookShare to Pinterest
Labels: badmiton, for the twins, Oliver + S