Confession: I have never watched Star Wars.  I tried once, but I fell asleep.   I saw this shirt make the rounds on pinterest a while back and had always meant to make it, but just never took the time- that is, until Kids Clothes Week  came around and I had nothing on my list to make yesterday.

My routine was thrown off yesterday as the twins each only took one nap yesterday- both at different times.  Nice.  So I didn't get to sew until the kiddos were in bed, so no pictures until this morning.  I went easy peasy today with another flashback skinny tee.  Have I made too many yet?? 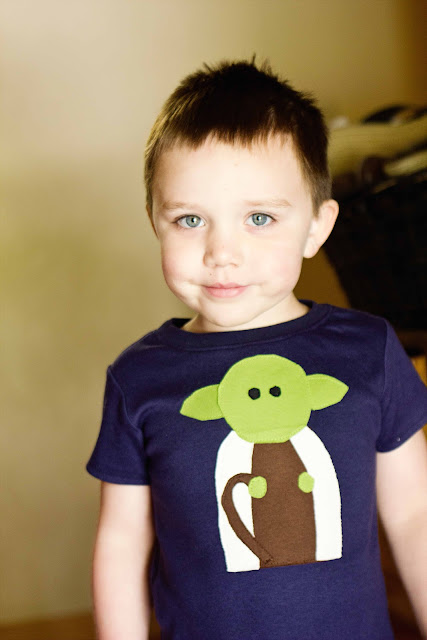 Don't worry, he hated it.  See, he hasn't seen Star Wars either.  So we tried to explain who Yoda was... nope, wouldn't put it on.  He wanted to know what day it was, I told him I would tell him when he put on the shirt... so he put it on... and decided he does like the shirt.
Posted by brittney at 10:05 AM